Hey guys i've got a real problem, i completed my grow weeks ago and im in the curing process, 50% have started developing what looks like mold......

WHAT DO I DO?! I'll do whatever it takes to not have to pitch my whole F*#^& harvest.

Is there anything i can do to kill the mold on the buds?? If we go ahead and smoke them anyways can i we get sick???

The mold took place somewhere between now and 5 days ago 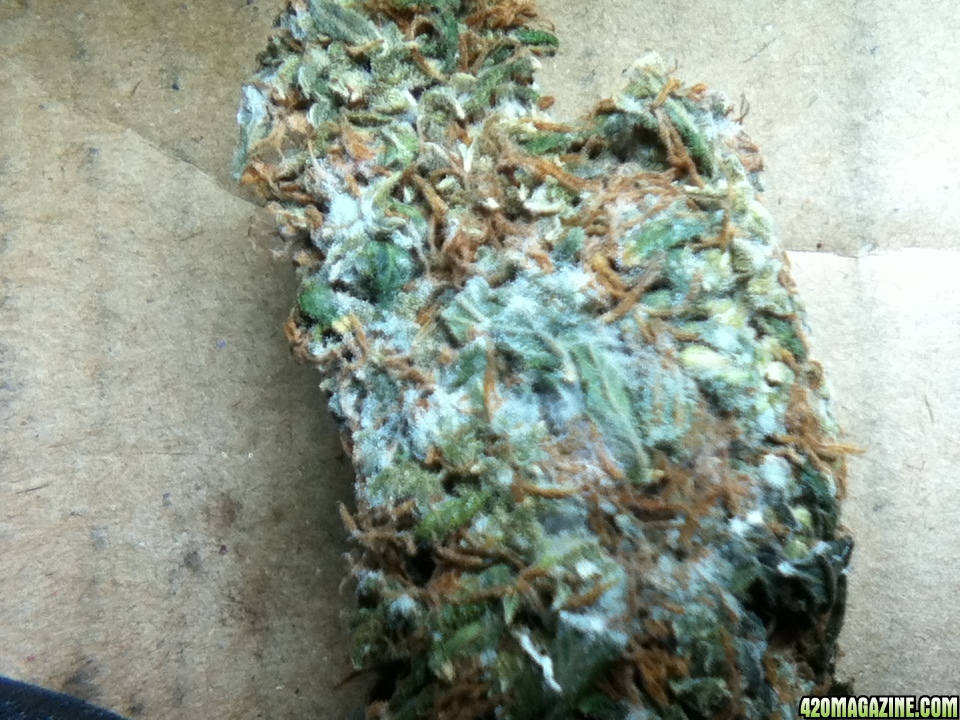 Alright after staying up most of the night doing some homework, and dealing with this problem i was able to sort this out.

I need to clarify, this mold wasn't visible until the 4th week of my CURE, never had any type of mold/pest during grow.

Now in the picture i took it may also have looked worse than it was, i took the picture under a high intensity white LED machinists light+magnified , under normal lighting conditions you basically couldn't see the mold without a magnifying glass. The only reason i caught it was because i was burping the curing containers, and wanted to take a peak at the trichs on one of my tops. The spores where also only visible on some of the buds from ONE of the plants, i harvested them all at different times and the other two went smooth sailing, pulled the buds out of curing last night just to be safe though.

I was able to save the contaminated portion of my harvest with the following method..

First i tried my best to figure out what type of mold it was, and more importantly what time it WASN'T. Out of the variety of molds that can cultivate on marijuana most of them won't hurt you in small amounts. There are two strands that although rare, can actually kill you.
Also most mold strands really only have a serious effect if ingested.

Stachybotrys and Anaerobic Bacteria. The first is the rarest, black by color / possible green spots. That one will probably cause damage to your respiratory system if not more. The second one is rare because of the conditions it grows in/on, basically it doesn't need oxygen and will grow in an environment with very little. Which is bad because that's similar to my curing conditions, and this strain of mold can also cause you to be very sick.

Knowing that the mold on my harvest was of a WHITE/ gray color helped narrow it down to one a few strands that won't hurt me, and would be able to be gotten rid of. When determining what type of mold your dealing with, it is equally as important to know the conditions of the environment leading to the cultivation, in my case i was refrigerating my cure because i heard that was a good tactic. Based on my conditions, the mold was either a very common type found on everything from rocket fuel to flowers and falls under the category "aspergillus", or the start of Penicillium hah. Can the weed be smoked with either of these two? NO, i mean it probably wont kill you but why take the chance. However i know these two types can be dealt with if the buds aren't infested too bad.

My method to getting rid of as many of the spores as possible was to bust up the contaminated buds and put them on a metal tray, be carefull doing this, if you use a high intensity light while doing so you'll see why, the spores hit the air like a bomb went off. If your smart you'll do this outside as to not contaminate your house/ grow area. The next step is to treat the buds with allot of heat all at once, this will dampen potency hard i believe, because it did for me, but at least you wont have to pitch / make hash oil. Mold CAN survive in high temperatures that kill most other things, HOWEVER it usually cant survive sudden increases in temperature. I've read that 300 degrees F should do some real damage to the spores if the weed is introduced from room temp, to sudden high heat ( ex : preheat the oven before you put it in) I decided to use as much heat as possible, 450 degrees to be sure. Like i said before, it took a real swing at potency, and if you aren't very carefull while doing this you'll ruin and burn the bud. I did mine in two batches, the difference between 30 seconds time in the oven nearly caught one on fire and just about ruined it.

something to note i didn't use a conventional oven, i used a forced hot air oven (convection) The difference is moving air current which could have made the difference in this scenario.

What i did next i don't know if it even helped but better safe than sorry, in a private area outside i was able to fan off the buds with a powerfull fan after the oven, hoping to blow off any remaining spores that i could. After that im only smoking this bud through a water bong, apparently that's supposed to help reduce SOME of the spores getting to you if there are any present still.

The reason i'm writing this!!
Is because i found just as much miss leading/BAD information as i did GOOD, so hopefully this is able to help somebody else looking for answers.

If your reading this because you have this problem and the mold is black, if i where you i'd pitch that bud. Is possible the mold can be toxic, and i don't know if the hash oil process will destroy those spores. Also i've read about, and heard about before this, people supposedly letting weed mold to selectively acquire a certain strain that supposedly "increases potency", i'm not going to say it's not possible, but i will say your probably an idiot. No offense, but your playing around with serious shit and i doubt it was cultivated in a LAB.
(off subject, I've ran into "purple haze" in my area that was black molded weed that gave it a purple look, another surefire way to see if you've got one of the show stopper strands is to put the bud under a black light in a dark room, if it glows you might be in trouble.)

One more thing, take into consideration the AMOUNT of weed we're talking about, i grew my own and am speaking about a large quantity, also the fact that i GREW it, its allot of effort to see it unfold this way. Basically what im saying is, if your reading this because your dime - quarter O of bud is moldy, just get another bag. Any straight up dealer should be real about it and make it right.

I've smoked a couple bowls of the bud since last night, like i said it effected potency pretty hard. it still gets me a nice high buzz but only lasts 30 minutes. It's not harsh to smoke like bud typically would be dried in the oven, but mine was also nearing the end of its cure anyways.

How can I improve taste on my next grow?

Water curing...let's give this a try