What is interesting about this figure is that the dispensaries and recreational stores were shown to account for only about $3.1 billion of that total. Also, that $10 billion total comes from a projected range of $9.6 to $11.1 billion – versus a 2014 range of $7.2 billion to $8.6 billion.

24/7 Wall St. wanted to go a step further on this issue about the economy of legalized marijuana. The reason here is simple: the projections have the legal marijuana business close to $30 billion by the year 2019, and there are so many issues not counted in the figures that the numbers could be much larger.

The Marijuana Business Daily also projected that each $1.00 of cannabis sold at the retail level (legally) adds at least another $2.60 to the economy in states where medical or recreational cannabis is legal.

What makes up the multiplier effect of the $1 in legalized marijuana spending is the money spent by the retailers themselves, the growers, the infused product makers, testing labs, staff salaries and security. That multiplier effect was said to be taken from more than 800 businesses, and it was also touted as being a very conservative number.

Here is the issue at stake though. If the multiplier really does make up $2.60 in dollars spent for every $1 sold, this number is seriously understated in the grander scheme of economics. Things such as the direct product cost (cost of goods sold), business taxes, state license fees and paraphernalia sales are not counted in that figure. Neither are tourism revenues.

If economists were to just take the initial $10 billion figure as gospel, then the rest of the market will be massively larger. Paraphernalia is said to be at least $1 billion in sales.

Another thing that is obviously not considered is the black market. And there is no projected cost for additional food and beverage items, which of course is mentioned because of "the munchies." So no chips, snacks, beverages, additional fast food or junk food spending and the like get tallied up here.

There are several other considerations. First off, literally hundreds or thousands of business ventures are getting backed and funded in states where marijuana is not legal. Whether it will be legal or not is a state-by-state matter, but many inventions and rediscoveries from decades past are literally being created and experimented on.

24/7 Wall St. recently covered a $75 million investment made by Privateer Holdings. This was one of the 10 most important companies in the cannabis industry.

Something else that has not been tabulated is all the money that goes in and out of the public stocks that are in emerging legalized and medical marijuana field. This became large enough of a segment that the Securities & Exchange Commission issued a fraud alert for unsuspecting investors back in 2014. Also, 24/7 Wall St. even once wrote about what a marijuana ETF might look like. Throw in these figures, and the numbers could grow exponentially.

Now consider that GW Pharmaceuticals PLC (NASDAQ: GWPH), based in the United Kingdom, is now a $2.3 billion company. It also has sales, although they are less than $50 million annually. Still, the hope is that GW will grow handily after further regulatory approvals occur (assuming they do) of its cannabinoid prescription medicines.

To show just how much interest is here: GW Pharma recently raised in excess of $200 million in new funds via a public secondary offering, after the overallotment option that was exercised. That equity sale was facilitated by companies such as Morgan Stanley, Bank of America Merrill Lynch, Cowen and Piper Jaffray. Those big companies might not have been considered facilitators of the medical marijuana and cannabinoid medicines industry in prior years. Also, Merrill Lynch recently upgraded GW Pharma as well.

Another consideration is what may be spent ahead in banking and financial services. As of 2015, banks and financial firms like credit card issuers have acted as though they do not want to deal with the legal marijuana industry. The reason here is simple: regulatory risks are simply off the charts and have not caught up to the legalization efforts.

24/7 Wall St. also went into the official taxes collected in the State of Colorado Department of Revenue. The site showed a figure of $52.5 million as a total of all marijuana taxes, licenses and fees year-to-date, as of the December collections. That figure is aggregated and some data is not able to be released due to confidentiality. In short, the numbers may be undercounted – and they are far less than some projected numbers we have seen elsewhere.

With more and more states aiming for decriminalization and legalization efforts in 2016 and beyond, coming up with a true economic figure would be guesswork and admittedly would have very wide ranges and perhaps all sorts of holes in the numbers. What is obvious here, assuming that official $10 billion tally is gospel, is that the net overall economic footprint and economic contribution is far larger than what is counted. 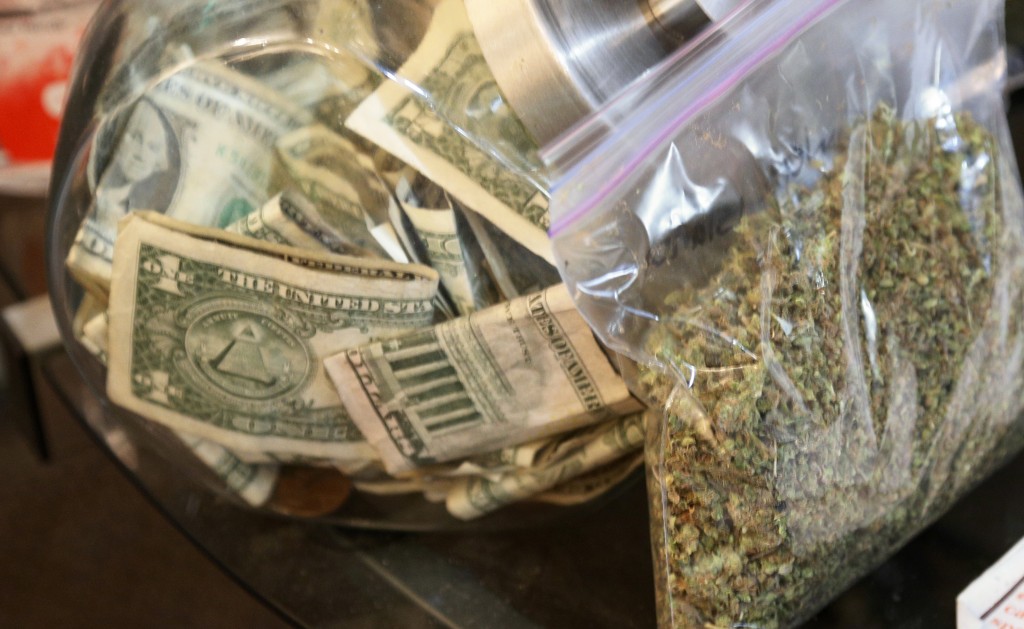