For the past two years, Michael Zaytsev has sold tickets to the New York Cannabis Film Festival on Eventbrite. The yearly event shows off films that span from entertaining comedies to educational documentaries in Brooklyn's trendy Wythe Hotel. But this year, Eventbrite abruptly pulled the event from its platform and suspended Zaytsev's account.

(Zaytsev is also a career coach who contributes to Forbes Coaches Council.)

Besides the film festival, Zaytsev has also organized cannabis industry networking events under the name High NY. He has sold tickets to dozens of events on Eventbrite with no problem. But last week, he was locked out of his account due to "violations of laws surrounding a federally regulated substance," according to an email Eventbrite sent to him.

"In order to have your account reinstated and be able to continue to use Eventbrite, we ask that you please reply to this email to agree to only publish events in compliance with our Terms of Use, Merchant Agreement, and all applicable laws."

Zaytsev says he has responded to the email multiple times, and has yet to receive a response.

"First of all, they have money that I'm owed for tickets I sold," said Zaytsev. "Forget cannabis, this is no way to treat a customer with a 3-year relationship with [the company]."

And though his account is frozen, Zaytsev has another event listing still live on the site. He has no way of logging in and retrieving the guest list.

As to why the event platform would suddenly take issue with the film festival, Zaytsev surmises that it may be due to a reference of CBD-infused popcorn.

CBD is a non-psychoactive cannabinoid that is produced by both marijuana and industrial hemp. While the legality of CBD is disputed, there are scenarios in which selling hemp-derived CBD could be legal under federal law. A spokesperson for Eventbrite said that legal hemp products do not violate the platform's Terms of Service.

CBD aside, other cannabis-related events have also been experiencing problems with Eventbrite.

The Southern California Cannabis Business and Investment Group holds events for professionals in the cannabis industry. "We don't sell cannabis. We just do a business meet-up," said James Jordan, one of the organizers of the event.

Jordan had been using Eventbrite for a year and a half before getting frozen out of his account. The offending listing? A finance panel featuring executives from cannabis-focused investment firms. He had sold 11 tickets on Eventbrite before he lost access to his account.

"I don't know what happened to the 11 payments," said Jordan. "I had to honor the tickets personally without receiving [the money]."

Jordan was eager to remedy any issues with his event listing that might cause him to get kicked off of the platform. But he found it impossible to get in touch with someone at the company to find out what caused the sudden action. He tried to file a complaint, but found that he had to reference a URL to submit one. "If they freeze you out, you can't reference a URL," he said.

"This is a ridiculous way to do it. I probably lost half of my crowd from the [finance] event," he said. "I've had ticket companies calling me trying to get me to be on their platforms, but I like Eventbrite."

Now, he says he is exploring other options.

"In rare cases where organizers continue to re-publish an event that has been found in violation or publish new events that are also found in violation, we will lock the account and work directly with the organizer to provide access to their remaining payments, attendee lists, etc." said a spokesperson for Eventbrite in an email.

However, neither Zaytsev nor Jordan have had any success in communicating directly with Eventbrite to access payouts or guest lists.

"The organizer still receives their full payout from tickets that were sold prior to the event being unpublished," said the spokesperson. Both Zaytsev and Jordan disputed this.

"I have not received anything at all in the way of correspondence or support since the account was frozen. No money. No email telling me final numbers. Nothing at all," said Jordan in an email.

(Update: Less than an hour after this article was published, Eventbrite unlocked Zaytsev's account and initiated a payout for the tickets he had sold for the film festival.)

"In situations like this, organizers can expect any remaining payout balance from ticket sales made prior to the event being unpublished, to be issued the following week," said the spokesperson.

Cannabis event organizers I spoke to for this story all expressed a desire to learn and correct offending material in their listings. Most had successfully used the platform many times before finding their accounts locked and feeling like they had little recourse. Eventbrite's spokesperson said that "certain cannabis-related health and educational events" are allowed on the site. "We cannot permit any event where cannabis is included with the purchase of a ticket or consumption is facilitated."

The arbitrary enforcement is frustrating as a myriad of other cannabis events remain listed on the site — including 420-friendly yoga in Boston and a cannabis happy hour in Washington D.C. advertising "FREE DABS all night!"

"It's very confusing," said Enrico Moses, the co-founder of the California-based marketing agency High Standards. His company hosts both consumption and non-consumption cannabis events. He says one of the firm's educational events was also shut down by Eventbrite last week.

"We've been bringing them a lot of money," said Moses, who has been using Eventbrite since January of this year. "That's why it was a shock. We've been doing it for so long."

Cannabis-related events brought in $100 million in ticket sales nationwide in 2016, according to internal research at EventHi, an event management software startup for the marijuana industry. That number is sure to grow as cannabis continues to gain societal and political acceptance.

EventHi CEO Ali Fakhri said the idea for the business was conceived after an event he helped organize was shut down by Eventbrite in 2014. (It was a non-consumption, educational event.)

Since then, he's been working on developing a platform where cannabis event organizers can find a safe online home for their listings. "In our industry, we have no other outlet but these mainstream brands to manage events," he said.

His biggest challenge in launching the platform was finding a financial institution that would work with a cannabis software company. It took Fakhri 11 months to find a bank that was willing to work with EventHi.

"The hoops [we had] to jump through were unbelievable, and we don't touch the plant," he said. But he wanted to be completely transparent with his bank in order to avoid potential shut-downs from payment processors.

EventHi is launching its platform in November, and will no doubt draw plenty of aggrieved Eventbrite users.

This post has been updated to reflect additional comments from Eventbrite. 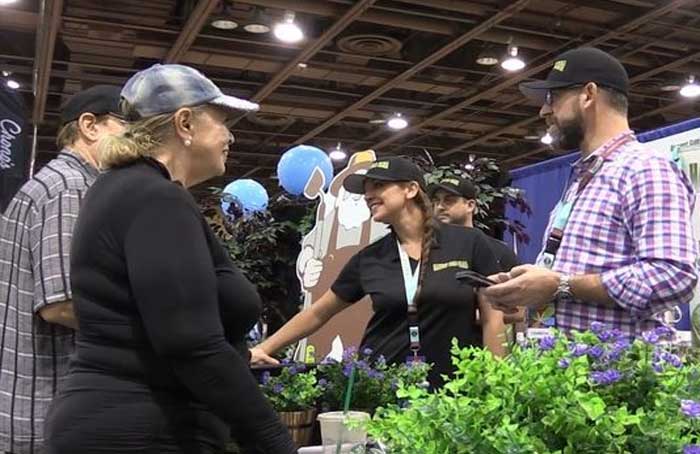