stoneotter said:
Welcome to the place where we dry em out before we chop em Cannafish.
Click to expand...

Right on @stoneotter.
Do you actually let them dry out in the pots before chopping? I was planning to give one last water before harvest.

Me thinks the water will prolong dry time after chop and therefore smoother smoke. 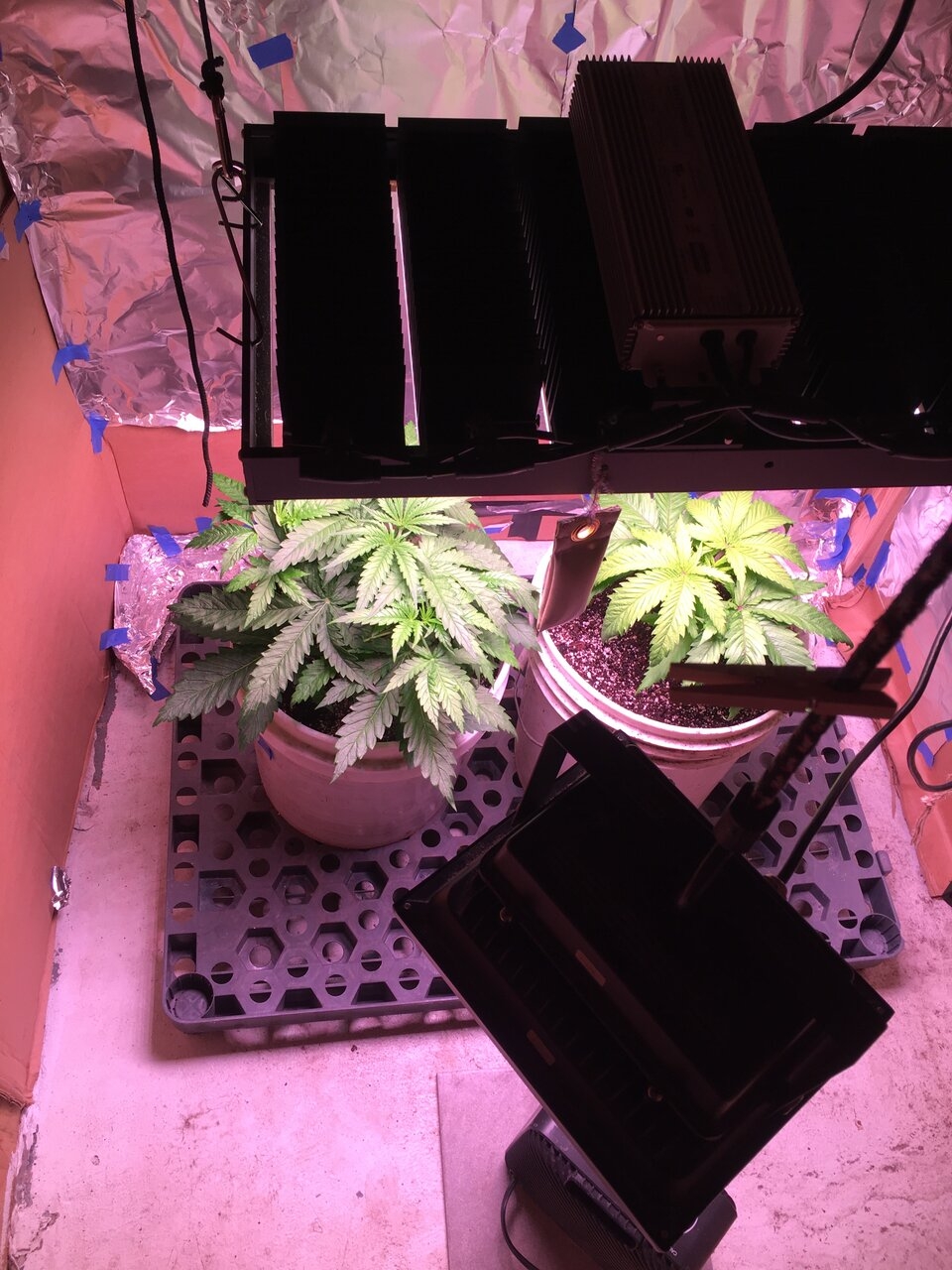 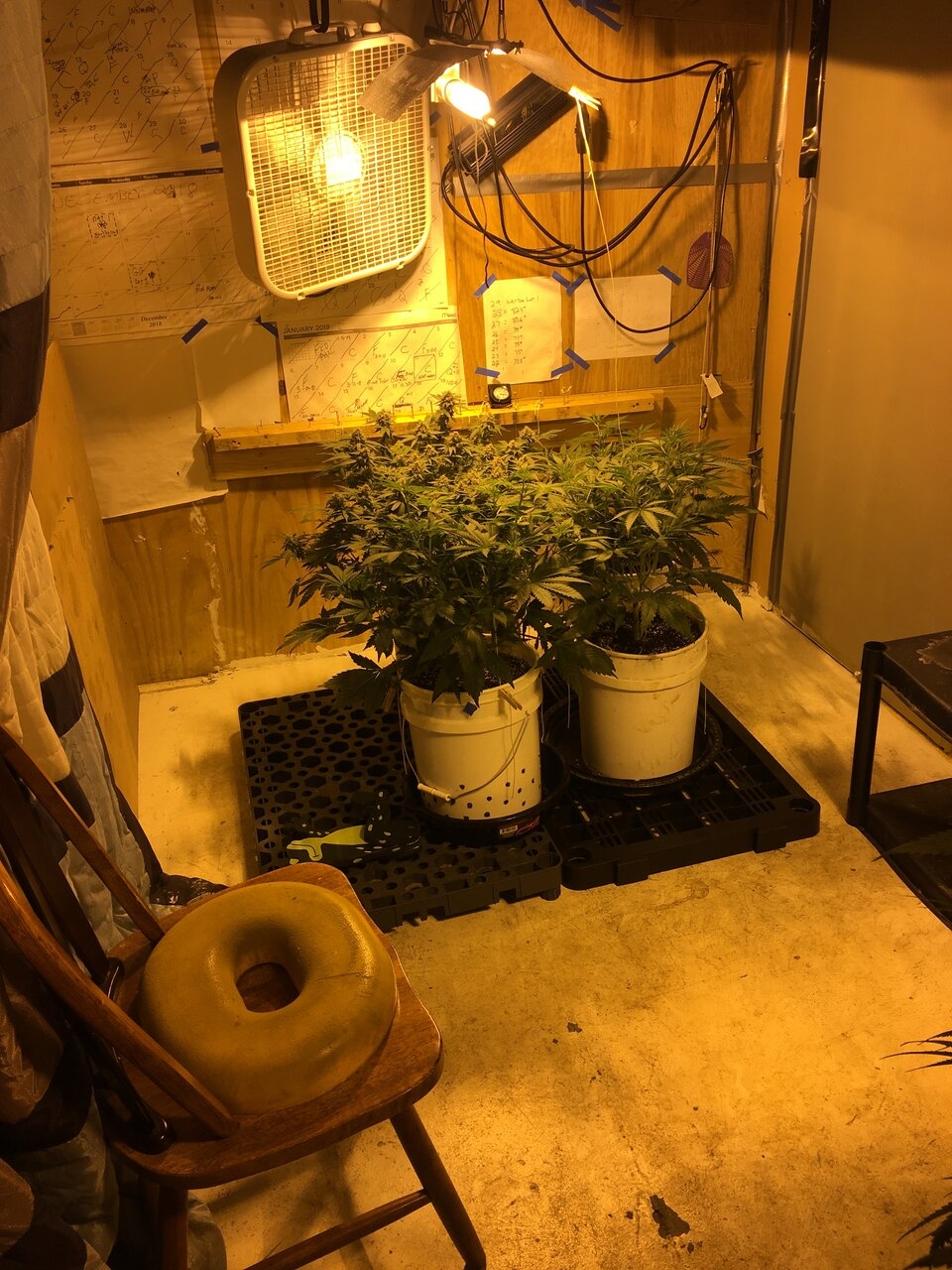 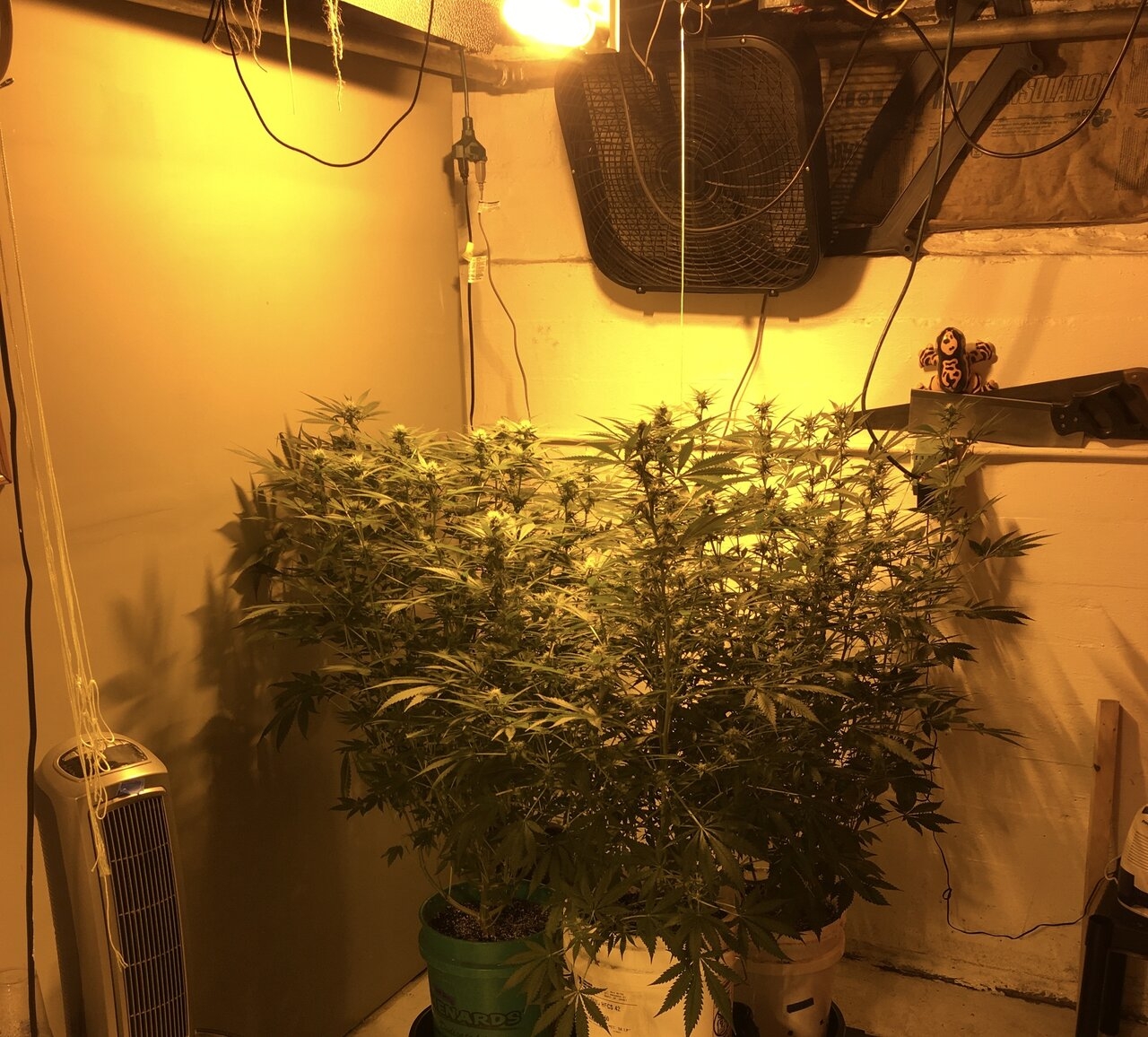 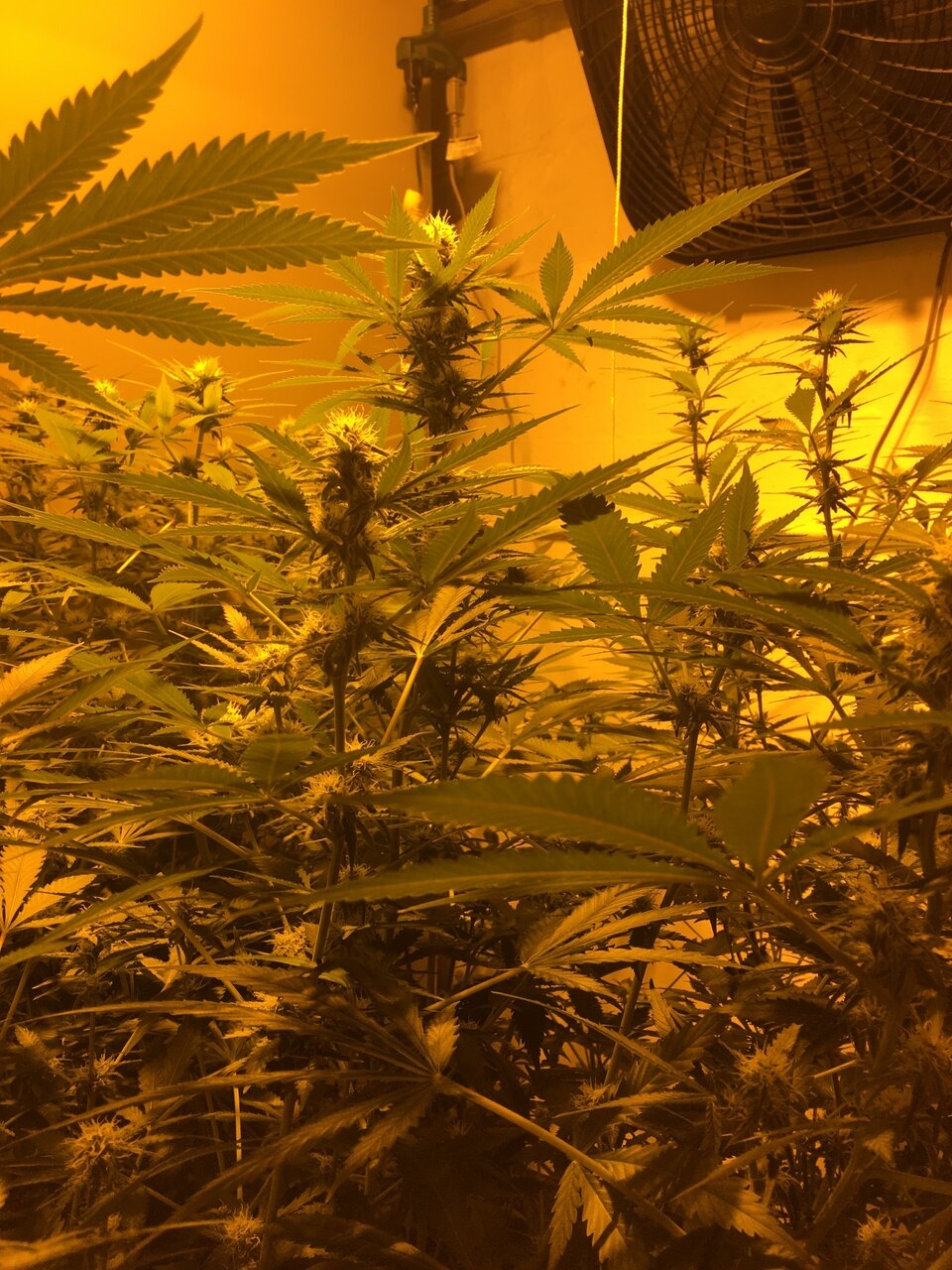 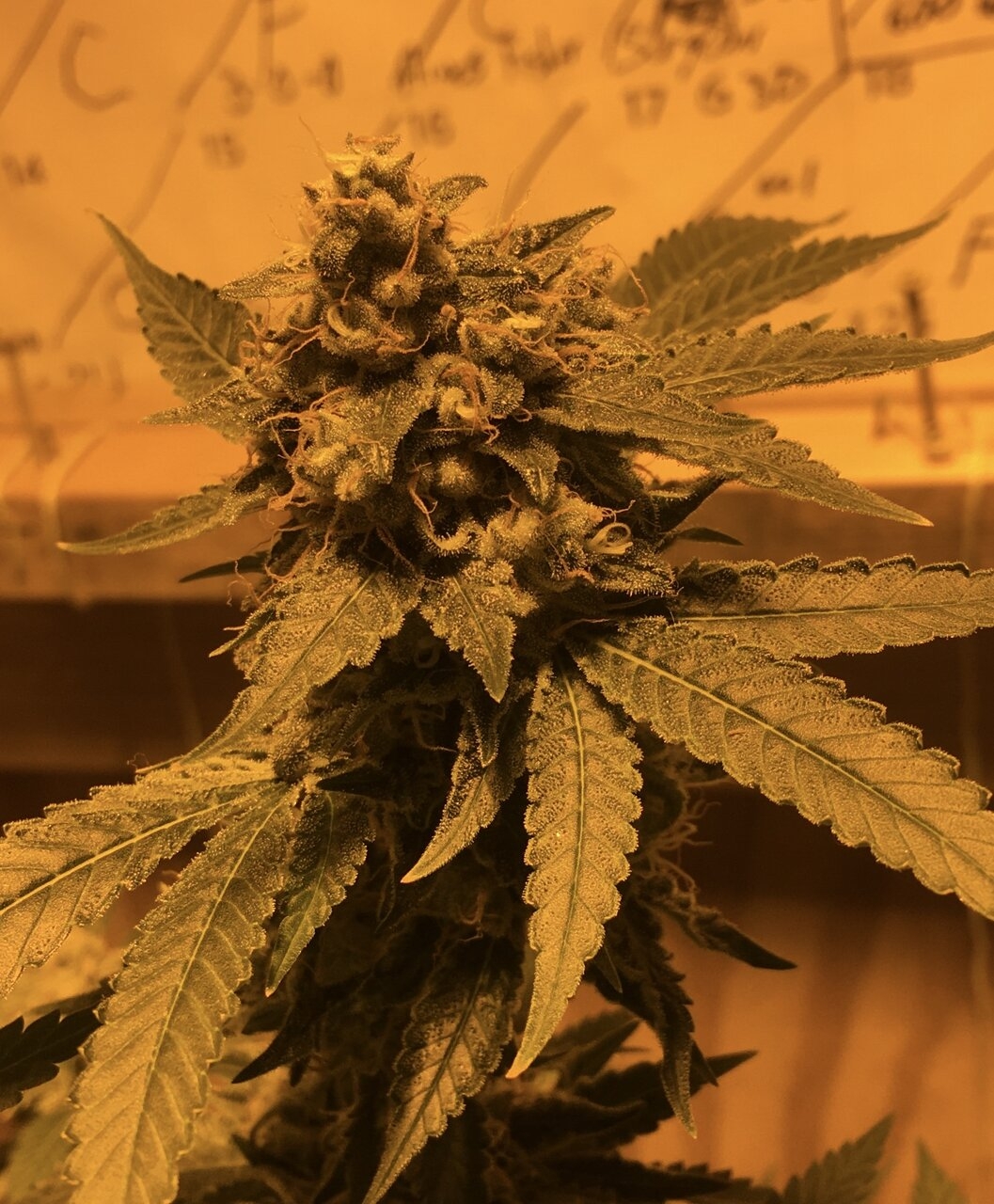 CannaFish said:
Right on @stoneotter.
Do you actually let them dry out in the pots before chopping? I was planning to give one last water before harvest.

Me thinks the water will prolong dry time after chop and therefore smoother smoke.
Click to expand...

I do thanks to Maritimer here. I wait until I see(trich color) that I think is going to be what I want in 10 days. It's trial and error and is close enough for me. I can see the day the trichs engorge when I open the tent first time for that day. I rescue them with water and chop usually the next day. It works for me. Sometimes the stem angle isn't available like my stankberries having little to no leaves left, so I try to use my eyes. I believe I can see it happen.
Observe, Adapt, Overcome
​
WeedSeedsExpress Godfather OG In LOS Scrogged & Cored Current

thanks @stoneotter ! That's what I wanted to know. I'll keep yall updated.

I had another nice seed plant in the tent that was putting out several bananas on the top of the bud at about day 54 so I had to pull her and put in time out in the dark. Going to chop after 72 hrs dark and then do a bud wash. 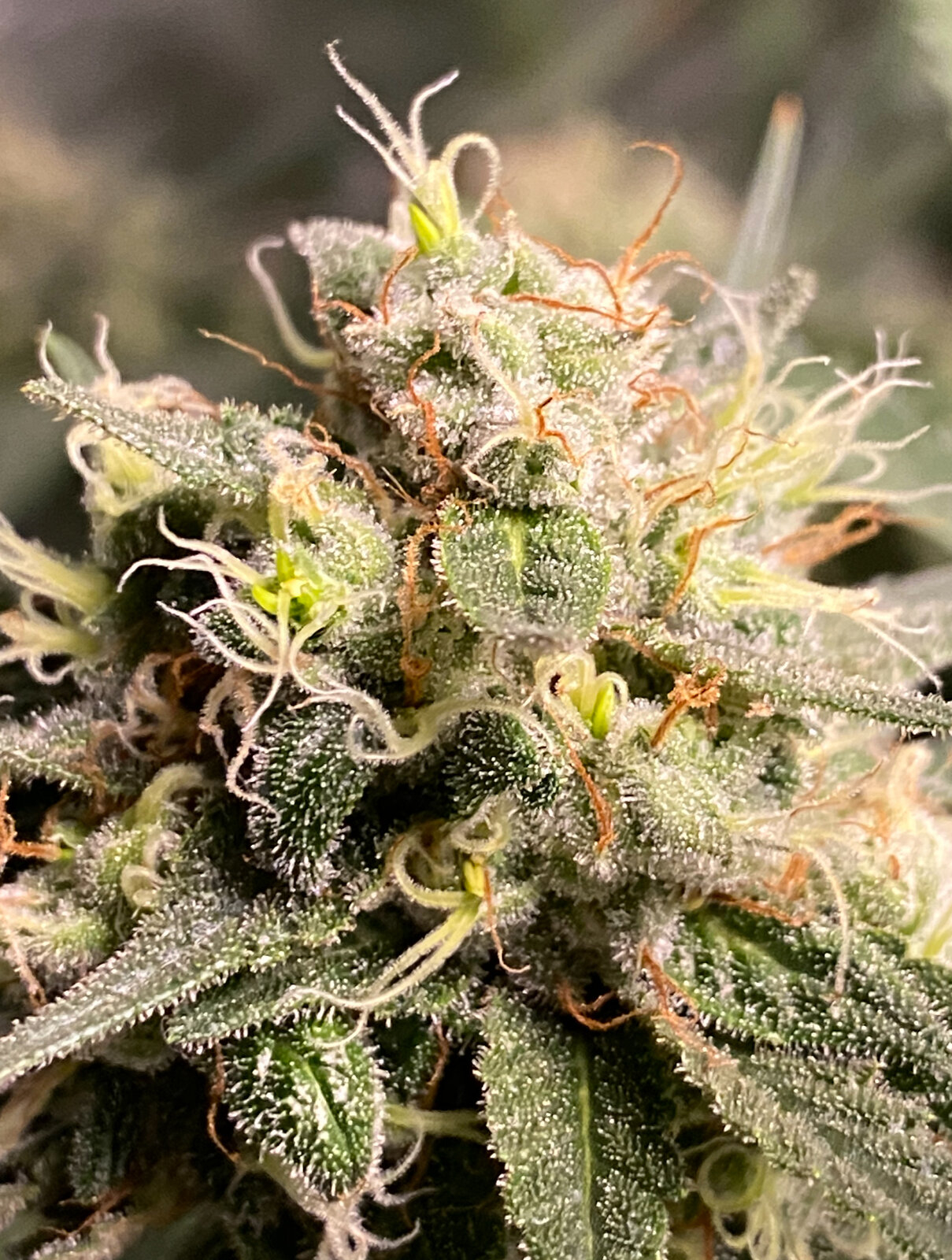 It’s pretty strong. Too bad it didn’t make it to the drought stress part and fully finish with the other 2. The male flowers make choosing a keeper easier.

stoneotter said:
We're having some nice days this week Maritimer, getting some leaves on trees. C'mon warm weather!
Click to expand...

I hope the warmer weather provides additional benefits to all us who suffer structural issues like bad necks, and backs, ect.
Gently Enchanted Science and Gardening Fun

@CannaFish your mentioning of the aloe did not pass bye unnoticed. I plan a full reply tonight during the "straw hat notes" I usually post in the middle of the night when pain overcomes fatigue. I get some of my best research done during times of rough pain. Anyhow, I look forward to chatting about the craft of brass cooking, wherein the blending of some anecdotal practices with some enchanted science will produce broths worthy our efforts. I get all stoned when I dig out the abstracts. Beats the crap out of thinking about how bad my back makes my leg feel.
Gently Enchanted Science and Gardening Fun

@Pennywise it has been too long since we said hello.
So, ohio!
remember ohio in Japanese is good morning, or good afternoon, or good nite. depends on time of day when said of course. LOL

has anyone seen my always missing bong poker?

What do we know about the brass and can it help us with gardening cannabis?

As they say, this is “yet to be fully elucidated” and what that means is we know a bit, but it changes with each new discovery, but yes brass can and does. Brassinosteroids are are a class of polyhydroxylated steroidal plant hormones that are involved in basically every aspect of plant growth and development. I use red or green cabbage or brown rice from the market, and Willow and American Sycamore tree leaves I collect each spring and fall when brewing up some brass. Usually these home brews are administered to a few of my houseplants prior to getting even close to the cannabis. Sort of like making a younger and smaller sibling taste or eat something before you are willing to try it on yourself, kind of thing. We last used a willow brass in effort to germinate old seeds. The amount of fun I get running these studies makes them worth my effort even in the face of repeated frustration over them mostly not working or worse. We never gonna know if we don't try, I hear.

Barket/ 11/2017
Brassinosteroids (BS) are a class of polyhydroxylated steroidal plant hormones. They are of ubiquitous occurrence in plant kingdom and are implicated in a wide range of physiological, biochemical and molecular responses in plants, such as seed germination, cell division and elongation, vascular differentiation, photomorphogenesis, photosynthesis, enzyme activation and senescence. They have also been found to protect plants from various abiotic and biotic stress factors, such as salt, temperature, water, heavy metals and pathogens. BS also enhance the yield of several cereal, legume, and oil seed crops. Moreover, they also increase the fruit production and quality of the fruits, in different plants of horticultural importance.

Pandey/Devi/Singh 07/2020
Brassinosteroids (BRs) are well-characterized growth hormones that are critical for plant growth, development, and productivity. Genetic and molecular studies have revealed the key components of BR biosynthesis and signaling pathways. Insights from Arabidopsis research revealed tissue and cell type-specific roles of BR in controlling cell elongation and maintenance of stem cell niche in roots. More recently, BRs have gained much attention in regulating the root growth during nutrient deficiency such as nitrogen, phosphorus, and boron. Differential distribution of nutrients in the rhizosphere alters BR hormone levels and signaling to reprogram spatial distribution of root system architecture (RSA) such as a change in primary root growth, lateral root numbers, length, and angle, root hair formation and elongation. These morpho-physiological changes in RSA are also known as an adaptive root trait or foraging response of the plant. In this review, we highlight the role of BRs in regulating RSA to increase root foraging response during fluctuating nutrient availability.

to be continued...
Gently Enchanted Science and Gardening Fun

Straw Hat Notes;
The retirement of our friend the Professor Emeritus of Biology at Cornell (Professor Pete) nearly two years ago remains about the saddest moment in my studies. This comes to mind tonight as I would surely enjoy another round of discussion with him regarding our difference of opinion regarding the primacy of ABA signaling in the face of ever mounting evidence to support my hypothesis. I said it then and I will say it now, that the changing of ABA levels are the primary GRN pathway enabler. That makes it boss hog. Sir.

The study I presented earlier Ha/Shang/Yang/Nam 09/2018 states “ In contrast to previous reports that ABA-induced stomatal closure was inhibited by brassinolide (BL), the most active BR, we showed that BL-induced stomatal closure was enhanced by ABA, indicating that the sequence of ABA or BL treatments led to different results. We found that this phenomenon occurred because the guard cells still had the capacity to be closed further by ABA, as the degree of stomatal closure by BL was always less than that by ABA.”.
The stomatal closure control of ABA is what leads me to think the actual drought stress response we seek from the cannabis can be achieved without having to physically drought stress the plant. We will make her think she is experiencing a drought even though she remains fully fertigated.
Time for some rippage

Brassinosteroids
AKA Brass
Overview of the BR Signaling Pathway.

very interesting study I just spied below. we like how the last line sounds. yeah
BR and ABA Pathways Antagonize One Another
Early studies showed that BR-deﬁcient mutants are hypersensitive to ABA (Clouse et al., 1996; Li et al., 2001). Because ABA production is induced during drought stress to promote stress tolerance (Cutler et al., 2010), these observations point toward a close relationship between BR and ABA pathways (Zhangetal., 2009b).Indeed,the molecular basis for BR–ABA antagonism has been extensively deﬁned, ranging from interactions between downstream TFs such as BES1andABI3orABI5(Ryuetal.,2014; Yang et al., 2016) to BIN2 kinase, a negative regulator of the BR signaling pathway that becomes activated in the presence of ABA (Wang et al., 2018a). BIN2 phosphorylates and promotes the activity of positive regulators in the ABA pathway including SnRK2 kinases(Caietal.,2014)andTFssuchasABI5(HuandYu,2014). Given the antagonism between BR and ABA pathways and the role of ABA in promoting drought stress responses, it might be expected that BRs inhibit drought stress responses.This appears to be the case for the BR signaling pathway operating through BRI1 to downstream BES1and BZR1TFs (Chenetal.,2017;Nolanetal., 2017b; Ye et al., 2017). However, overexpression of the vascular BR receptor BRL3 promotes drought responses without penalizing growth (Fàbregas et al., 2018).
Last edited: May 21, 2020
Gently Enchanted Science and Gardening Fun

Nice plants, by the way. Looking forward to watching them grow.
Click to expand...

Ahoy @Magnus8
your stated curiosity is very welcome.
I feel the same way.
the plants say thanks

MeJA study update;
The Cali Orange Clone has exceeded our target wilt of 50 degrees measuring 54 degrees this morning. She ran 10 days in full drought. As I have mentioned before the wilt is not linear and daily measurements or inspections are recommended when over 40 degrees of wilt has accumulated.

The cultivar looks amazing this deep into a period of continuously induced abiotic stress. I have decided to provide her a bonus for being such a good girl. We are preparing a celebratory tea for her refreshment. The 125 grams of OWC have been brewing overnite in a gallon of RO. We will now add two tablespoons of organic blackstrap molasses, and there you have it. Wormstrap Tea. I have been cautioned about some numbers going Hot with my tea combined with nutes, but she only has a few days left before she is chopped. She presents the quicker flowering version in this pheno.
I says let her have a few Bon Bon's if she so desires.

Looking at the spreadsheet she only had 21 days in veg and presently is on only flower day 53 with day 56 looking to be the end. Only 3 weeks veg and 8 weeks flower I reckon looking at her she will do well on the growing metric my friend @Van Stank hipped me to a while back. It takes total time into yield considerations. 77 days and I figure 5 zips this could rate pretty well. The numbers will tell the story, but this might be a #1 run.
Last edited: May 21, 2020
Gently Enchanted Science and Gardening Fun

Ahoy 420,
I am struggling a bit with some chemistry problem so I am soliciting @Brian420pm or another bright mind to maybe help us out. We have a MeJA ester prepared at 100 ppm. solution. I want to double the ppm. without adding MeJA. The basic idea I have swirling around my Polish brain is involving partial freezing of the solution. The water molecules will freeze faster than the ester. What if..as ice begins to form I remove the ice chips to a separate beaker and after gathering a bunch of chips I weigh the results and perform a vaporization test to check for the presence of any ester in our collected fluid. If no ester vaporizes we pulled straight water chips from our partially frozen 100 ppm solution, therefore our remaining ester is more concentrated. No? Wonder if I said that right?
Gently Enchanted Science and Gardening Fun