Washington State - When Top Shelf Cannabis in Bellingham took delivery of 330 bottles of a brand new marijuana infused soda on September 28, they were excited to promote it to their customers. They sold ten bottles of legal sparkling pomegranate soda made by Mirth Provisions of Longview on the first day. But when employees opened up shop the following day, they found a sticky mess of broken bottles and shards of glass throughout the store. During the night, the bottles began to self destruct. The employees didn't think anything was dangerous until they heard and saw bottles randomly explode.

"It sounded like a shotgun going off," said Top Shelf Cannabis manager Zach Henifin. "You can actually feel it, it was that explosive". Wearing a face shield and protective garb, Henifin placed cartons of unexploded soda in a steel box the size of a small dumpster outside of the store. The staff used bleach to clean up the mess and pulled pieces of glass from cardboard boxes. The "pot pop" continued to explode inside the steel container for 10 days.

"It's almost like bomb box because they randomly go off during the day," said Henifin. No one was injured at the store from the exploding bottles, but they don't know if the customers that bought the soda had their bottles explode on them. Adam Stites, the founder of Mirth Provisions, said Top Shelf wasn't the only shop reporting exploding bottles. Main Street Marijuana and New Vansterdam in Vancouver reported problems with the pop.

"It was simply the fact that his batch had a higher yeast concentration, and one of the by-products of yeast is excess carbon dioxide," said Stites. He says his company pressured test the carbonated drink to be 14 PSI -- or pounds per square inch. He says bottles were designed to handle 42 PSI. "The yeast was just building up the pressure in the bottles over a seven to 10 day period," said Stites. He says he plans to offer a full refund to shops, but he's have a dispute with Top Shelf over who is responsible for picking up and destroying the soda.

There's not an easy answer to the question. I-502 gives the Liquor Control Board strict authority on how to regulate the growing, processing, packaging and shipping of any legal marijuana product sold in the state, and that includes marijuana infused products like sparkling pomegranate. State law says Top Shelf had to quarantine any marijuana product for 72 hours to allow the opportunity for LCB officers to inspect the products for compliance. There is little wiggle room that allows Top Shelf to destroy a potentially dangerous product that could cause bodily harm.

"Everything has to have 100 percent traceability, and if things are blowing up and they are no longer good, are they still going to be traced? What happens us at that point?" said Hinefin. Henifin said the LCB enforcement offer told them state rules say the product had to be picked up by the manufacturer for it to be destroyed. But Longview is a 3 and a half hour drive from Bellingham and the bottles were exploding.

"It's basically been exploding for a week and a half all over the store," said Henifin, who added he thought the box was the safest spot so nobody got hurt Stites did send a driver to pick on the product nine days after Top Shelf says it told him of the exploding bottles. Henifin said the driver picked up only a few bottles before they started to explode in his van. He said the driver abandoned the rest, leaving Henifin and his staff stuck with hundreds of bottles and wondering what to do next.

They are waiting to hear guidance from the Liquor Control Board. Stites said his company will pick up the remain bottles later this week. By Tuesday, most of the bottles had exploded in the steel dumpster. "Sometimes when your creating new products in new marketplace there's a little bit of a learning curve and that's what we've experienced," said Stites. 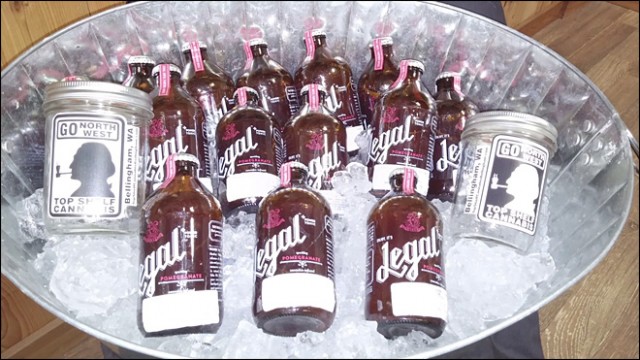 I hope everyone is ok.

Danged if that isn't funny

Radogast is right to be concerned. I mean, everyone knows that soda is not good for you -- and this was before pop bottles started exploding. (Now called Pop Rocks?)

It's really not funny, especially for the guy who bought a defective product, with the manufacturer unwilling to clean up the mess... (Man, do Americans have to resort to suing to make businesses to do the right thing?) No, not funny at all... This is serious business...

"You know that everyone thinks that in order to do South Park we must be wild, crazy, rock and roll stars. But the truth is we're just wholesome middle-American guys. We enjoy soda pop, baseball and beating up old people just as much as anybody." Trey Parker

"For her fifth wedding, the bride wore black and carried a scotch and soda." Phyllis Battelle

What gets me is they seem to worry about the liquor control board number counts... as if there was never an accident involving damaged cases of whiskey and beer. ... just clean up the mess and settle the damages, ok?
Radogast