Since Quinn Stumpf was born, her family has been left with a lot of questions. "We're finding that there are never any answers," April Stumpf, Quinn's mother, said. Quinn suffers hundreds of uncontrollable seizures every day, severely delaying her development. So much so, that she couldn't join her mother at the State Capitol Friday. "Which is why I've got her picture and she's here in spirit," Stumpf said. "I know that she'd be smiling if she were here."

Quinn's mother was in Des Moines for Governor Branstad's signing of the Medical Cannabidiol Act into law, which allows families to gain access to a cannabis oil Stumpf says could stop Quinn's seizures. Branstad said it was stories like Quinn's that changed his mind on the policy. "I've got to say, I was skeptical at first," Branstad said, noting the similar decision in Utah and Alabama. "I became convinced that this was appropriate public policy for the State of Iowa." There are some opponents that say legalizing the oil sends the wrong message to would-be illegal users that drug use is acceptable. However, these parents say the oil cannot get you high, so that's not an issue.

"I wasn't really sure this day would ever come," Stumpf said. "It's a very, very special moment and to share with so many fantastic families we've met a long the way in this process is very special and I hold them all dear to my heart." The new law says a person can possess 32 ounces of the oil with a neurologists supervision, but it must be bought out of State. Still, even thought the Stumpf's would drive to Colorado several times a year, and spend thousands of dollars, they say it's worth it to get their daughter back. "She's just a shell right now and we want to see that personality come back," Stumpf said. The new law takes effect July 1.

ORIGINAL STORY: Friday marks a milestone for the state of Iowa as Gov. Terry Branstad will sign Senate File 2360, legalizing one form of medical marijuana. While the governor's signature brings relief to families and epileptic patients, the legislation outlines specific conditions and guidelines. The drug will only be legal in the form of cannabis oil, a non-smoking product of marijuana with low doses of THC, the component that causes a high. Only those with intractable epilepsy will be eligible to use the drug, a type in which the patient does not respond to medication meant to alleviate seizures. Under the law, no other medical conditions will be eligible.

The patient must have a recommendation from a neurologist, proving the doctor and patient have exhausted all other treatment options. It only applies to permanent Iowa residents 18 years old and older, or given to an adult primary caretaker to administer. Minnesota Gov. Mark Dayton signed medical marijuana legislation Thursday. Once it becomes law in Iowa, 23 states will have legalized the drug for medical use. Gov. Branstad will sign the bill Friday at 2:30 p.m. at the State Capitol. It will become law July 1. 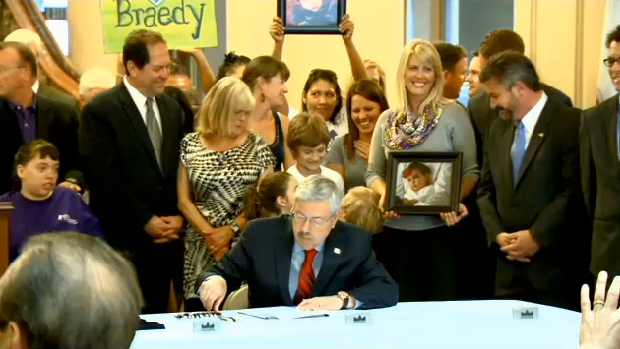 "There are some opponents that say legalizing the oil sends the wrong message to would-be illegal users that drug use is acceptable."

There are some opponents that say legalizing cigarettes, alcohol, or prescription medications sends the wrong message to would-be illegal users that drug use is acceptable.

In fact, many experts say that the FDA's and doctors' approval of prescription medications is part of the reason why kids think it's okay to take them -- that Big Pharma drugs are safer than illegal drugs, which is obviously not always the case.