The parents of RayAnn Moseley, the Pensacola child with intractable epilepsy whose story softened the hearts of reluctant lawmakers, are fighting a new battle: getting Charlotte's Web to Florida. The Moseleys have formed a company to apply to be one of the five medical marijuana dispensaries under the new law that allows for the cultivation of marijuana low in THC, the chemical that provides the high, and high in CBD, the one that calms seizures. They say their motives are pure: to guarantee the strain that worked miracles in Colorado is available in Florida and to avoid the risk of having to rely on imitations.

"I'm only ready to try something that's working and is safe," said Holley Moseley, mother of RayAnn. But their efforts face hurdles – and critics. The Moseleys are partnering with the Stanley Brothers, the family that went from obscure Colorado marijuana farmers to international miracle workers when the mother of Charlotte Figi used the extract of their plants to treat her daughter with intractable epilepsy. That partnership with the Moseleys, if successful, threatens to edge out others who also see business potential in Florida's new cash crop. At a hearing to develop the rules for growing, cultivating and dispensing the legal marijuana last week, several cannabis experts and entrepreneurs dismissed the notion that Charlotte's Web is unique. The testimony was speculative, but presenters said it is one of several high CBD strains that could be developed to treat epilepsy.

"The Stanleys' claim is, through trial and error, they have come across a strain that is especially effective for intractable epilepsy, but other people are saying the same thing," said Kerry Herndon, who owns a nursery in Apopka. He said he has been approached by several people, including the Stanleys, who claim to have unique strains high in CBD and want to partner with his nursery. "Who knows? How can you tell?" he said. "Everybody's got an agenda, and it's all financial, and it's stomach-turning."

Charlotte's Web is the trademark owned by the Stanley brothers, who became famous last August after a CNN special report by medical reporter Sanjay Gupta featured the 7-year-old Colorado girl, Charlotte Figi. After two years of taking a marijuana extract, she has become nearly seizure-free, and the Stanleys called their low-THC, high-CBD strain "Charlotte's Web." Like many families who heard that story, the Moseleys traveled to Colorado, met Charlotte and the Stanleys, and vowed to find a way to legalize the drug in Florida.

After months of working to see the unimaginable – a bill to legalize a strain of marijuana intended to help their child – the unexpected occurred in the form of a surprise amendment to the marijuana bill. The amendment, which emerged in the final hours of the Legislative session, required that the five dispensaries licensed to grow and sell marijuana be nurseries in Florida for at least 30 years. The intent was clear: outsiders like the Stanleys were not going to be allowed to set up shop unless they partnered with someone already here.

"They now have to make a deal with the evil growers who manipulated the politics," Herndon said facetiously. The Moseleys say they understand that Charlotte's Web is just one of the high-CBD strains known, but it's the strain with a track record. "This has never been about money," Holley Moseley said. "All along, our goal has been to get Charlotte's Web for RayAnn, whether that was moving to Colorado or fighting to make it legal here." As the parents of a child with an intractable form of epilepsy, there is nothing conventional about Holley and Peyton Moseley's path through parenthood.

Holley first met RayAnn in a hospital ward in Pensacola, where she was a pediatric nurse. The blue-eyed 2-year-old had cerebral palsy, was in state custody and had been in a non-medical shelter where her treatment needs had been neglected. Her birth mother was a drug user and prostitute. Christmas was approaching, and Holley got permission to have RayAnn join her and her husband for the holidays. That's all it took to win their hearts. They hired a lawyer and for three years fought to adopt RayAnn. Their family has since expanded with two natural children.

The Moseleys found themselves fighting for RayAnn again this year when they joined with other families to legalize a strain of marijuana that promises to treat seizures in children with chronic epilepsy. "Why don't you just find a way to get the stuff into Florida illegally?" Rep. Matt Gaetz asked Peyton Moseley at a January legislative workshop on legalizing pot that is high in CBD. "First of all, Florida is our home, but we're not willing to break the law even to help our daughter," Peyton answered. "And there are so many parents who are in the same situation. If we leave, that's one less voice for everybody else who's suffering."

Recalling the Moseleys' story later, Gaetz, a hard-edged Republican from the Panhandle town of Shalimar, got misty-eyed. "I don't know many people on the planet Earth who spend three years to adopt a severely ill child and then have such respect for our laws that they are unwilling to break them," he said. RayAnn, who is now 11, traveled to the Capitol to win votes for the law, delivering drawings labeled "Rays of Hope" to lawmakers who helped. But when the amendment was added to the bill, the Moseleys realized that if they were going to get Charlotte's Web to Florida, they were going to have to make it happen.

They created a non-profit organization modeled after the Stanleys' non-profit Realm of Caring and, because the law does not appear to allow a non-profit to cultivate plants considered illegal under federal law, they created a for-profit limited liability corporation, at the advice of their lawyer, to operate a dispensary. They named it Ray of Hope for Florida. Under the agreement with the Stanleys, nurseries in Florida will not be able to get the Charlotte's Web plant unless they receive it from the Moseleys and the Stanleys, said Heather Jackson, executive director of Realm of Caring, the non-profit group that provides assistance to families through education about Charlotte's Web. "We generally like to partner with other families because they are so dedicated to it," Jackson said. "They are going to make the right moral decisions, and they're always focused on the best interests of the patient. Who else is going to take a call at 8:30 at night to help a patient?"

The model works this way: The nursery licensed to work with the Stanleys cultivates, grows and develops the extract of the low-THC, high-CBD strain of cannabis the Stanleys have developed and refined over the past five years. They use profits from their dispensaries to finance the research and finance Realm of Caring. In Colorado, they charge families five cents a milligram and work closely with the advocates at the non-profit arm to determine dosage and provide assistance. Realm of Caring has licenses in Colorado and California, with plans to expand their model to other states. Its staff, made up mostly of parents of children receiving treatment from Charlotte's Web, provides education about how the extract works on a child's system and potential drug interactions. They help parents determine dosage and provide free and reduced-price access to the extract. They are now serving 434 patients, and thousands more are on the waiting list.

Jackson's 11-year-old son, Zaki, was the second child treated with the Stanleys' strain of high CBD marijuana to control epileptic seizures. This month, she said, he has been seizure-free for 21 months. Dosage depends on the child's weight and diagnosis. Under the draft rule developed by the Florida Department of Health, there is no guarantee the state will pick the nursery and dispensary that offers Charlotte's Web. Under the proposal, the five dispensaries, one in each region, will be chosen by lottery. That proposal was roundly criticized not only by growers, entrepreneurs and developers, but even the sponsor of the bill. The department is revising the draft rule.

Meanwhile, Joel Stanley has met with several potential growers and is looking for either "licensing the intellectual property or creating joint ventures between our companies and some of the qualified applicants we have." "Which one and how many we're going to propose to pass this torch in Florida – or whether we'll try to develop a relationship with all five – will be more clear once the regulations come out," he said after the rules hearing last week. Complicating things for the Stanleys is that their oldest brother, Josh, has created his own company, FloriCan, and is working to develop another high-CBD strain apart from Charlotte's Web.

"He's been traveling in other countries and working on it with other states," said Jason Unger, Josh Stanley's Florida lobbyist. For the Moseleys, none of these developments change their focus. "If Charlotte's Web didn't make it to Florida, Peyton and I would be moving to Colorado," Holley said. "From the moment that I met RayAnn, she stole my heart. I've been fighting for her since, and this is just another step in the process. It's all about her. We'll do what we need to do." 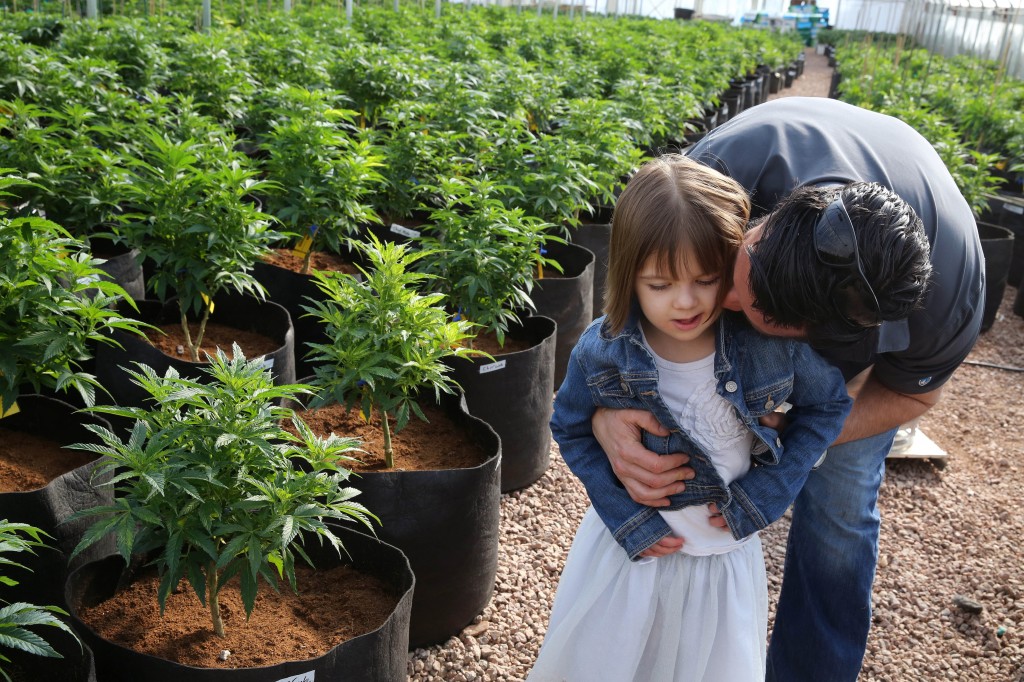