Kansas - During it one family spoke about how legalizing the drug for medical purposes could help their little girl. "There's something that could possibly give her a chance at normal life and we can't even try it," said Christine Bay, the mother of a little girl named Autumn. The 2-year-old has a rare condition that causes her to have seizures that sometimes last two hours. "As of three days ago our neurologist says we are out of options for medication," Bay said. The mother said her daughter's final hope is CBD oil, an oil made from marijuana plants, but she can't get it because medical marijuana is illegal in Kansas. That's why dozens of protestors came out here to 95th Street and Quivira Road to support SB9, also known as the Cannabis Compassionate Care Act. It's an act that, if passed, would legalize medical marijuana in Kansas. "All we want is for her to enjoy life and be the happy baby that she is when she's not having the issues," said Joseph Gordon, Autumn's father.

Both parents said they've thought about buying marijuana illegally, but are worried about the long-term ramifications. "There are programs in Colorado ready to sponsor medications. I have it in my hand and I can't give it to her for fear that they're going to take all of my kids away and put me in a cage," Bay said. More than 20 states have already legalized medical marijuana. Right now, if a person is caught with marijuana, they could face up to a year in jail and up to a $1,000 fine. In Missouri there were more than 20,000 marijuana-related arrests in 2011. However, earlier this month, Missouri lawmakers passed a bill that lets people with epilepsy get a prescription for cannabis extract if other treatments aren't successful. 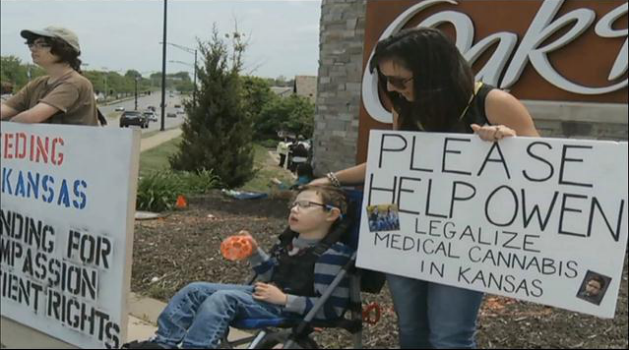 Hi my name is omar galvan and im sorry to hear about ur daughter I hope it works out and please bring up lydia story to convince them she was a young girl with seizures also and whos mom was tryin to get same law changed in th there state but unfortunately was to late.im sure u can find her story on here as well good luck
-onelove-

May 17, 2014
The General
T
T
Marchers Push For Legalized Medical Cannabis In Missouri And Kansas