Arcata, CA. -- Arcata elected officials will discuss the city's medical marijuana ordinance after staff was notified that because of the federal government's intention to step up cannabis enforcement legal action could be taken against the city.

During an August meeting with U.S. Attorney Melinda Haag, Arcata's city attorney and police chief learned that Haag was monitoring the city's medical marijuana zoning regulations. According to city staff, Haag said federal action likely wouldn't be taken against medical marijuana patients who are seriously ill, but Arcata could be prosecuted in civil or criminal court.

The meeting came after the cities of Oakland, Chico and Eureka received letters from Haag's office regarding their medical marijuana laws. Arcata has not received a letter from Haag's office, said City Manager Randy Mendosa. On Wednesday, the council will meet with Arcata City Attorney Nancy Diamond and discuss anything the city could be held liable for.

"The council needs to discuss and review what our current situation is because we have the same exposure the other cities have," Mendosa said.

According to Arcata city staff, in February, the U.S. Attorney sent a letter to officials in Oakland saying the city's proposed permitting of industrial marijuana cultivation and manufacturing facilities violates federal law. Chico officials also received a letter from the U.S. Attorney for the Eastern District of California in July stating that a proposed city ordinance authorizing permits for two medical marijuana facilities of up to 10,000 square feet would authorize conduct in violation of federal law, according to Arcata staff.

Eureka officials received a letter on Aug. 15 advising that the issuance of up to four use permits for medical marijuana cultivation, processing and distribution would violate federal law. In response to the letter, the Eureka City Council on Tuesday will discuss issuing a 45-day moratorium on medical marijuana dispensaries within city limits. It's because of these recent developments in other cities that the Arcata City Council will discuss Arcata's ordinance, Mendosa said. But patients who grow medical marijuana for personal use shouldn't worry, he said.

"My sense is there has been some excesses where people have been cheating and hiding under the umbrella of compassionate medicine for people and lining their pockets with money," Mendosa said. "People looking for marijuana for medicine shouldn't have any worries. The large grows -- those are the folks that are going to need to worry."

In addition to Haag's warning, the Arcata City Council on Wednesday will focus on medical marijuana dispensaries and the growing operations that supports them, said Larry Oetker, the city's community development director. The city council could decide to process pending conditional use permit applications for dispensaries, or it could institute a moratorium on new facilities, he said.

Ultimately, the city's goal is to have no more than two dispensaries, Oetker said.

"The city has had a long position that those people that need medical marijuana should have access to medical marijuana," Oetker said. "If you're just growing marijuana to sell on the street, that's illegal. That's not supported in the city's ordinance."

If the U.S. Attorney decides to take legal action against Arcata, it could come in the form of an injunctive relief, which would suspend the city's medical marijuana ordinance, or a fine, Diamond said. But, she said, the U.S. Attorney's office won't know what route to take until the facts of each case is presented. The attorneys' letters basically outline the options that are available to them should they decide to prosecute Arcata or any other city, Diamond said.

According to Arcata Mayor Susan Ornelas, it's likely the city council will hold off on making any changes that would affect Arcata's existing dispensaries until it can get more clarity on the subject. Ornelas said she also invited a member of U.S. Sen. Barbara Boxer's office to speak to Arcata officials about the issue.

"For us, it's a real frustrating dilemma," she said. "We appreciate our land use code. It limits dispensaries. We're not anti-215, but we didn't want to be overrun by them and so we felt we had worked out a really good plan." 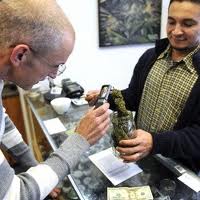 Feds throwing their weight around again.
Enough already!
Everything i say is heresay and probably a lie! :rasta:
K

Yes, this is very bad....its like they (Feds) want to keep their filthy hands on the money as they already know the people are going to be demanding freedom for the plant, but on whose dime? So many paradoxes.


Barbara Boxer needs to be voted out of office like yesterday. That blue blood old war bag simply goes with the money vote and is strongly opposed to legalization. Wow, talk about disrespecting her constituents...:yikes:

keyplay said:
Yes, this is very bad....its like they (Feds) want to keep their filthy hands on the money as they already know the people are going to be demanding freedom for the plant, but on whose dime? So many paradoxes.


Barbara Boxer needs to be voted out of office like yesterday. That blue blood old war bag simply goes with the money vote and is strongly opposed to legalization. Wow, talk about disrespecting her constituents...:yikes:
Click to expand...


Before you throw Boxer out you should consider who might replace her. It could be worse, like if Carly Fiorina was elected US Senator. You think she would support legalization? What Californian US Senator or Congress person supports prop 19 type legalization? We need to educate not eradicate.
Common Sense Is Not All That Common:cool027:

No Medical Pot Growing In Fortuna?