Two San Francisco medical cannabis dispensaries praised as models for their industry will close under federal Justice Department pressure at the end of business today.

HopeNet, on Ninth Street in South of Market, and the Vapor Room, on Haight Street in the Lower Haight, will be the seventh and eighth San Francisco dispensaries to close under federal pressure since a coordinated statewide
crackdown began last fall.

Their respective landlords received letters in the spring from U.S. Attorney Melinda Haag that warned of property seizures and stiff prison sentences if the pot clubs did not depart.

A spokesman for the U.S. attorney did not immediately respond to an email seeking comment. Local Justice Department officials seldom comment on the crackdown, but they have said in the past that only dispensaries located near schools, parks or other places where children congregate are targeted for closure.

Marijuana advocates have criticized Haag and U.S. Attorney General Eric Holder for shuttering dispensaries that appear to be abiding by state and local laws. As recently as June, Holder told Congress that only dispensaries breaking state law would face federal prosecution.

HopeNet opened in 2002, while Vapor Room has been a Lower Haight fixture since 2004. Each facility was in full compliance with local law, according to Eileen Shields, a spokeswoman with the Department of Public Health, which regulates San Francisco's licensed, taxpaying dispensaries.

Both dispensaries also were known for generous "compassion programs" through which low-income cannabis users could receive free or heavily discounted "medicine."

The discounted medicine – as well as the free yoga, veterans support groups and free counseling offered at the Vapor Room's Lower Haight space – will be "temporarily shuttered" while the collective transitions to a delivery-only operation, Executive Director Martin Olive said.

"Hopefully we'll be able to restart those off-site services shortly," he said. "We're working on a way to somehow incorporate compassionate assistance within this delivery model."

To mark the closure, local marijuana activists will stage a "New Orleans-style funeral" protest on Wednesday evening. Activists will meet at Haight and Steiner streets at 4 p.m. and march to the Federal Building by 5 p.m., Olive said.

"Get involved," he said.

Californians first approved the use of medical marijuana for the seriously ill in 1996. While marijuana remains illegal under federal law and some cities and law enforcement officials take the same view, storefront collectives were approved by the state Legislature in 2003 and operate under guidelines published by then-Attorney General Jerry Brown in 2008.

San Francisco began licensing and regulating dispensaries, which pay local and state sales tax as well as more than $10,000 in annual permit fees, in 2005.

According to records from the Public Health Department, there are now fewer than 20 permitted and operating medical marijuana clubs in San Francisco, a ten-year low. 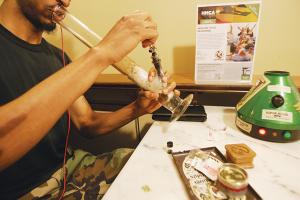