I also had 2 northern lights. One turned out male, and the other stopped growing a long time ago. I suspect I fried it with nutes. Live and learn?

Anyway, I learned that the soil I chose had alot to do with such slow growth. I used Schultz growing mix by itself. BAD IDEA! I feel I'd have way better results had I mixed a medium with the right drainage and sufficient oxygen.

It doesn't help that I added a product called Rare Earth from General Hydroponics. This was added on top of the soil before watering. It's supposed to coat the roots and help them take in more nutrients. What it really did was make my soil even worse. Very clumpy! I uprooted the male to take a look and noticed the clumps too hard for the roots to get through. Lesson learned!

Forgot to mention, the plant that has been doing better was planted in Black Gold cuz I ran out of Schultz. What a difference!!!

The plant on the lowerleft is in Black Gold, planted almost two weeks after the rest. 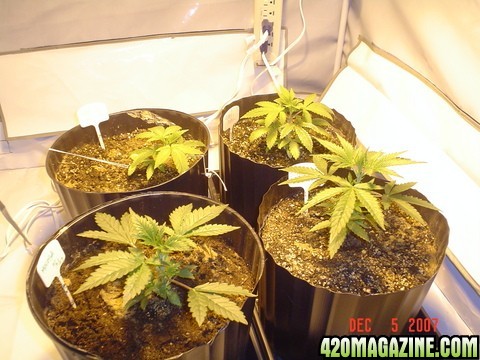 Experimented with LST. Unfortunately this plant turned out male. I think it was too under-developed when I started the LST. 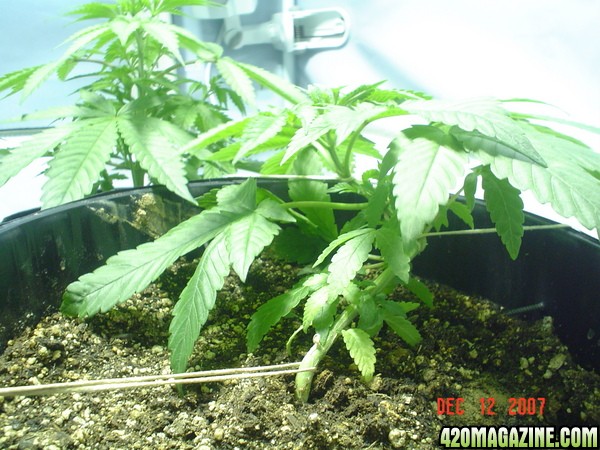 This pic was taken late in the veg phase. I had just gotten a metal halide bulb compatible to my hps ballast. Wish I did this from the start. 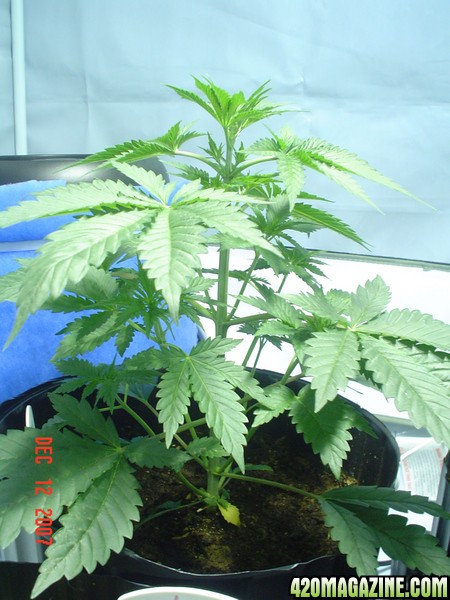 Day 1 of flowering. Notice the hps light. The two NL plants on the bottom were trashed. 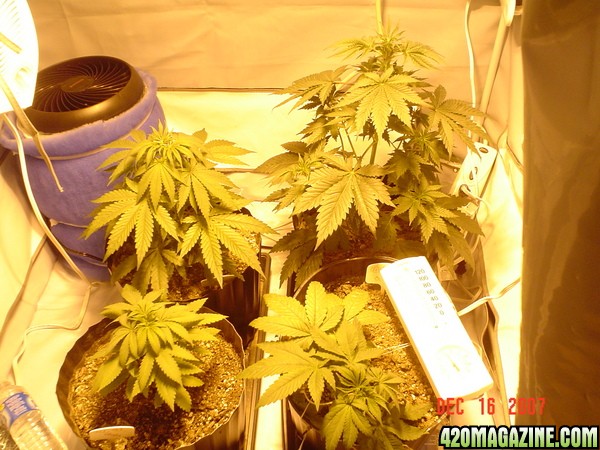 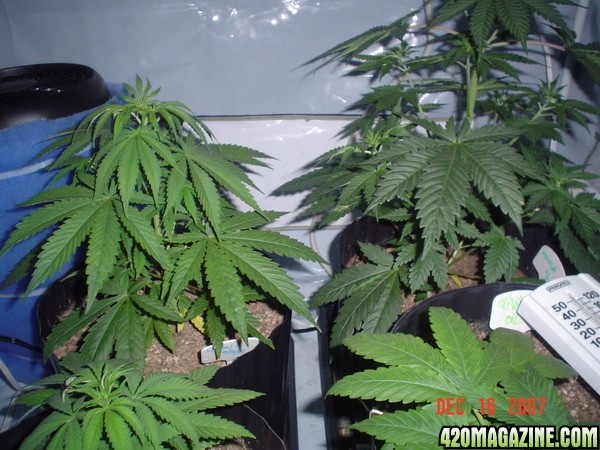 Day 7 of flowering. I realllllly start to notice the new growth. Very exciting. 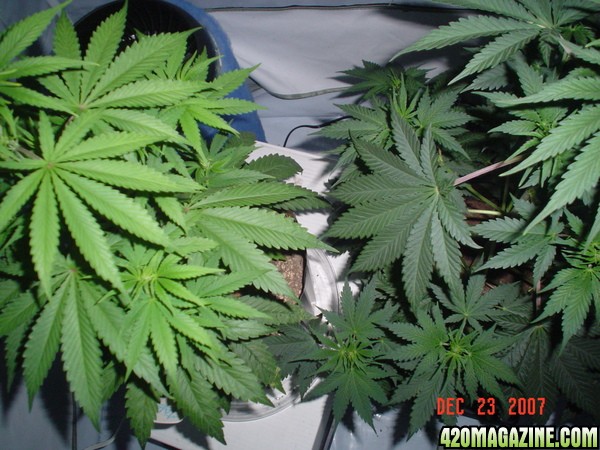 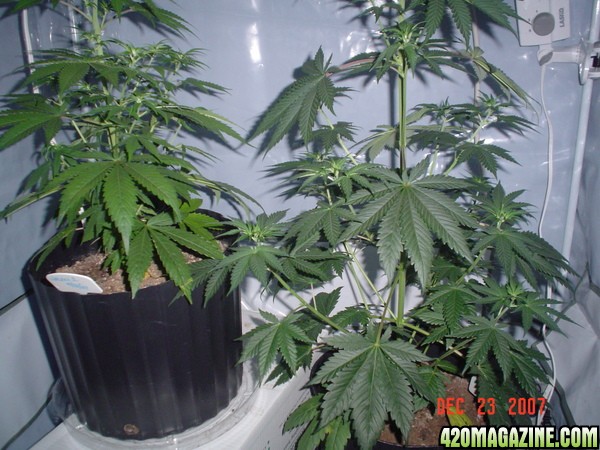 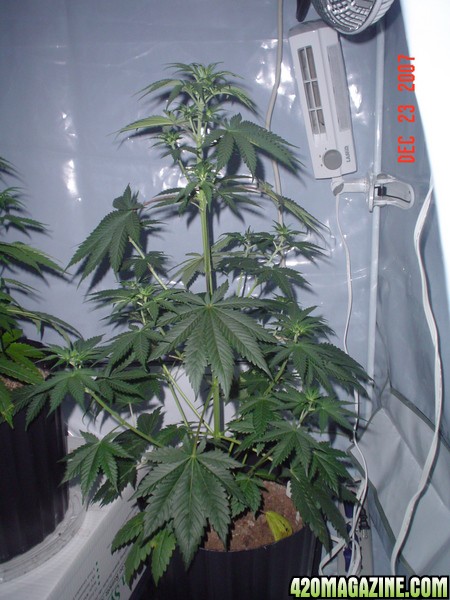 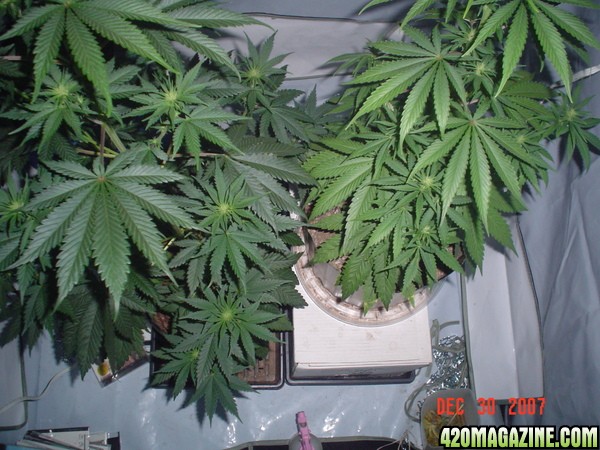 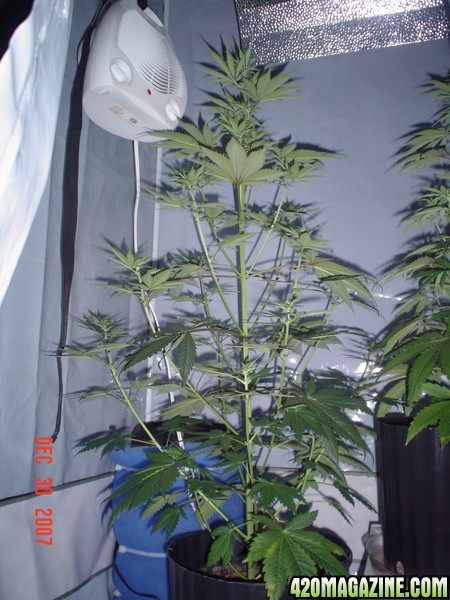 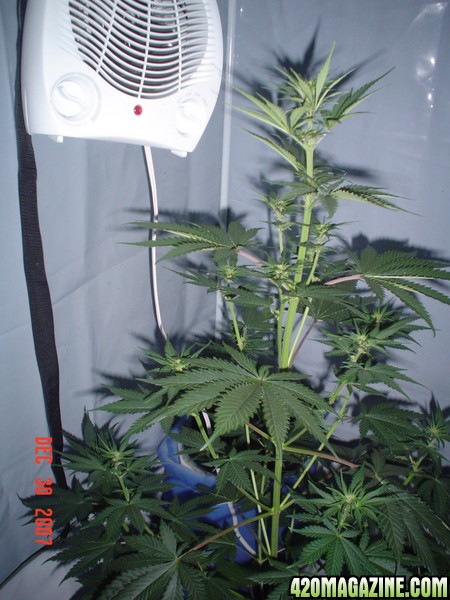 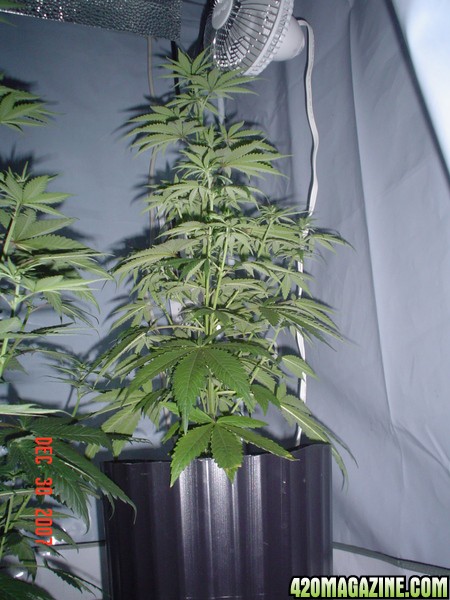 I was getting a bit worried that my light was too close to the tops, but there aren't any signs of them being burnt so I guess they're doing fine. I'm sure the two fans on both ends of the reflector help. 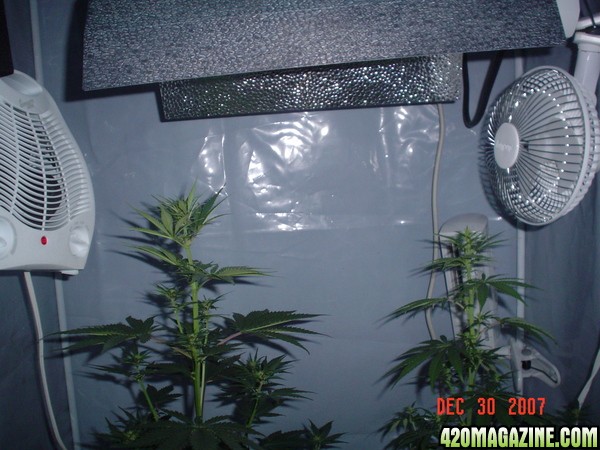 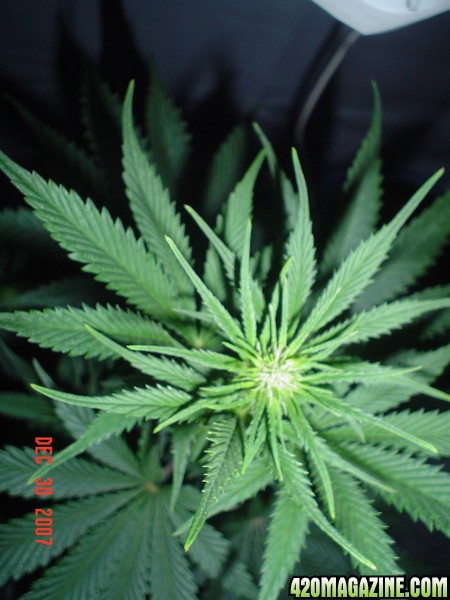 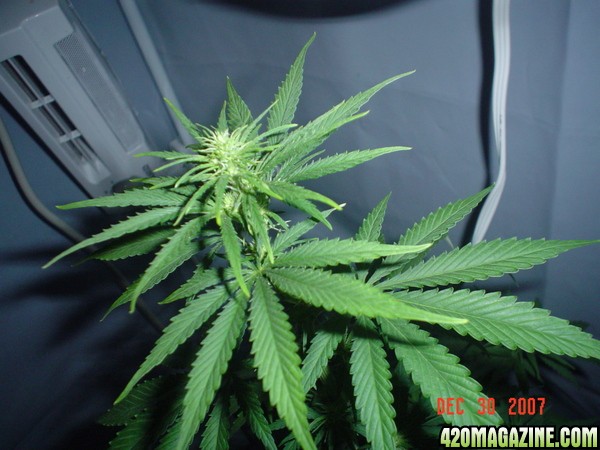 They look VERY healthy, Like Roor said, watch the reaching fan leaves, I have burned many a tips like that

Thanks man. Keeping an eye on them isn't a problem. I find myself sitting on the floor in front of them just watching them for what seems like forever lol.
The lock upon my garden gate's a snail, that's what it is. - Donovan

Healthy and beautiful plants, and a spotless grow room. I will be following this journal for sure. +10 reps for luck!
R

Thanks for the nice words fellas.

Question: I've really made a point of not overwatering. I mix a gallon of water with nutes ONCE a week and I feed each plant half a gallon. I then wait until i see the fan leaves droop a little (which only takes about 2-3 days) and I give them just enough water (about 1/4 gallon) to see those fan leaves straighten out in minutes. My question is, should I be waiting for the leaves to droop? I hope it isn't very stressful.

Oh, and they're in 5 gallon pots, only filled up about 3/4 of the way up.
The lock upon my garden gate's a snail, that's what it is. - Donovan

I usually water when the very lower leaves begin to show droopiness and I usually give them a good blast of water. I would guess they get about a gallon if not a bit more... I look for a small amount of run off (water coming out the bottom vents on the pot). The best way I have found to determine if they need water is to pick up the pot with one hand. It is an acquired sense that comes with time and experience. If you let them droop too much you will notice leafs dying off a couple days after watering.
Live free or die!

Great! .. I haven't lost any bottom leaves yet, so that's a good sign. I'll definitely start weighing out the pots to get an idea of what they're supposed to weigh fully watered and dry. Thanks.
The lock upon my garden gate's a snail, that's what it is. - Donovan

I endorse the wet/dry cycle.

Hey Moose, can you elaborate on the subject? Maybe tell me about other approaches people take on watering and why you dig the wet/dry cycle?
The lock upon my garden gate's a snail, that's what it is. - Donovan

Thanks for the links Moose.
The lock upon my garden gate's a snail, that's what it is. - Donovan

Does anyone know when plants usually stop stretching during the flowering stage?
The lock upon my garden gate's a snail, that's what it is. - Donovan

I notice a big slow down in between 2 and 3 weeks.
Live free or die!

Good. I'm on day 17, so hopefully most the stretching has been done. I'm ready to see buds!

Hey Kick, congratulations on your last grow. Results look great! You actually have me thinking about trimming the bottom leaves the way you did. Do you think it's too late?
The lock upon my garden gate's a snail, that's what it is. - Donovan

I cropped mine at 21 days so the vegetative growth would not come back. Any later than say 3 1/2 to 4 weeks may effect yield, but I haven't tried it... The nice thing was I have no "larf" or wispy buds to deal with, all nice nuggets. My first plants that went down yielded about 2 oz ea. give or take when finished. The last of the plants that are still hanging look like they will yield between 3 and 4 oz. each. I only veg for a couple weeks by the time they go into the room. I finished harvest completely two days ago and am ready to send new clones in to veg tonight. I will keep a full journal this time around.
Live free or die!

I'm still gonna do a little more research on the subject. I'd hate to mess up my plants by doing something that isn't exactly necessary. Plus, I've been turning my plants around evenly so that most the bud sights get sufficient light. Should I expect little popcorn buds from the lower branches even if they're receiving plenty of light?
The lock upon my garden gate's a snail, that's what it is. - Donovan

Well, before skirting my plants no light was getting to the bottom of the plants. After skirting them light could make it all the way to the dirt. Another way to attack the problem would be to add side lights. I have considered using a T5 fluorescent for this, but I opted to go with the skirting for the added benefit of removing what can amount to being a hiding place for bugs. I have been back into growing since 2001 when I got my card. I have taken on other patients since then and have been growing on a much larger scale for the last 2 1/2 yrs. This is my best crop yet. The yields I got before this technique where close but a lot of small buds and larf. Hard to deal with and hard to manicure, etc. Now that has been eliminated. I have read in a few place that to be considered efficient one must produce .5 g/watt. I am above that level by quite a bit which is encouraging.
Live free or die!

Most plants usually stop stretching by week 3. Some growers cut back on the Nitrogen a little to discourage stretching, but this must be done carefully as to not cause a deficiency.

If you do some LST with the lower branches and move them out of the shade caused by the larger fan leaves above then the buds will be bigger. In the past I have completly cut off the really small growth at the very bottom. This is done in an effort to cause "energy transference", by cutting away the under-developed parts and allowing the plant to put it's energy into the larger buds recieving more light making them even more robust. I typically do not cut large fan leaves off the plant because these are the main solar collecting panels on the plant by which alot of light energy is absorbed. Moving the buds out of their shadow is a better idea then cutting them off.