First Grow Ever, Check It Out.


This is a grow a close friend and i put together. Its our first attempt at growing, so we are

using it as a experimental learning challange. We planted normal bag seed in two solo

cups and put them under clfs. After about two days they sprouted and looked good for the

first few days. We then moved them to our dresser where they could get better light.

pots. The first plant that sprouted was from the blue solo cup (blue girl) before the

transplant she looked good and after she seem to do better in the new soil. But the other

seed thats in the red solo (Red Girl) was showing some yellow on the leafs, and after the

transplant it kinda got alittle worse but new growth is green.
And now for the pictures: 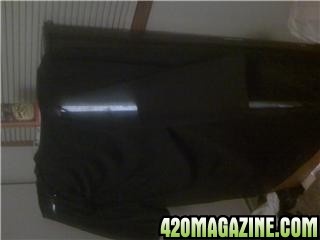 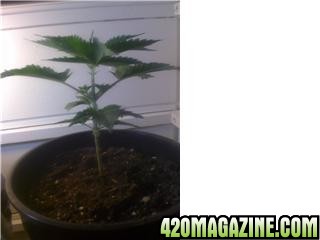 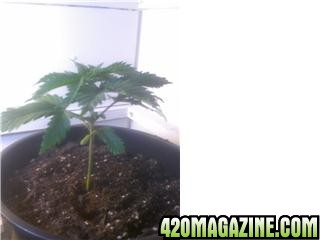 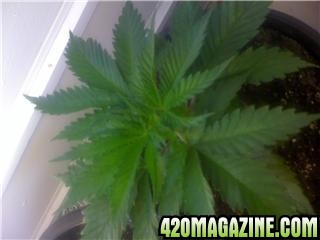 Its been about three weeks and we have a few questoins
1. Red girl still has yellow leafs on the bottom but the new growth is green is that a

problem we can fix?
2. Its been about three weeks since they started and im wondering when to start my

flowering. I want to keep the plant small and bush like, do i just tie the top down?
3. Sex? When should we look for the sex of the plants?

Thank to everyone who posts in this topic, feel free to comment anything.
Last edited by a moderator: Oct 17, 2008

1) The yellowing on the lower leaves may be a lack of nitrogen or even a fertilizer burn from the soil itself. Unless it progresses on to upper tiers of leaves, not a problem. Many people experience yellowing early due to how sensitive seedlings can be.

2) I judge a flowering time, personally, by when my plants reach just under 1/2 of the total height i have. I see you wish yo keep them short and bushy(i would assume that is due to your grow space's interior height. The rule of thumb, i believe, is that a plant will a bit more than double in size when flowered. Thusly, I veg until its half the height of my grow area. You mentioned tying the top of the plant down. You may want to research LST(low-stress-training). It helps growers with limited height.

3) Sex? Well, I look for sex after i begin my 12/12 light schedule. If you can determine that before hand, cool. Ive had trouble even determining the sex of plants before flowering. Flowering causes a hormonal reaction in the plant which show the sex organs and eventually leads to flowering.

4) I know there was no 4th question. I just want you to know i am not an expert and that this is my opinion. I've learned alot but i have plenty more to absorb. Take all the advice as a whole and use your own common sense. Learn from everything you observe. Best of luck, dude. +rep
Last edited by a moderator: Oct 17, 2008
My food is my blood is my heart is my mind...​
Share your BEST 420 RECIPES!:29:​
T

Thanks for all the reps in the next few days ill have new ones up and some more progress on the two new hopefull ladies.

I Am the Close friend The_Viper mentioned. Both of the ladies have nine leaves. I was just wondering is that good or is that normal? I thought they only had seven leaves... We have a pic of it on the way.
Who said money doesn't grow on trees?! They must have the wrong kind of tree. :smoke2:
T

there are not a set amount of leaves in MJ. maybe different phenos or what not but keep looking for the signs of healthy foliage. But most of all let your plants grow with your love and do not rush them. don't overlove them as that is MJ's #2 killer behind Johnny Law..........................

In a closed society where everybody's guilty, the only crime is getting caught. In a world of thieves, the only final sin is stupidity -

We have pics on the way for an update... We're kind of concerned that we've outgrown our space... especially with flowering on the way. But I guess we will have to see. We have another house we can bring one of them to if necesary. When the pics get aproved any input on what to do would be appreciated. I think we doin pretty well for out first time around. Oh, and so Nine leaves doesn't mean anything? It just happens?
Who said money doesn't grow on trees?! They must have the wrong kind of tree. :smoke2:
B

As long as the leaves are an odd #, like 3,5,7,9,11...they are fine. When they start going even is when there is a problem.
1st Grow
2nd Grow
3rd DIY Grow
4th Grow
White Russian and White Russian X Blueberry (4th Grow)
White Russian, Purple Kool Aid and Deep Chunk Grow(In Progress)
B

Berry, I don't understand. Could you elaborate a little?

Its like a genetic thing. If you look at your plant, it should be totally symmetrical. All the nodes at the same spot. See what im saying.
1st Grow
2nd Grow
3rd DIY Grow
4th Grow
White Russian and White Russian X Blueberry (4th Grow)
White Russian, Purple Kool Aid and Deep Chunk Grow(In Progress)
B

Ahh got it, Thanks!
420 Magazine®
Creating Cannabis Awareness Since 1993

This is The one that was smaller... It so caught up. and is starting to be bigger than the other one. 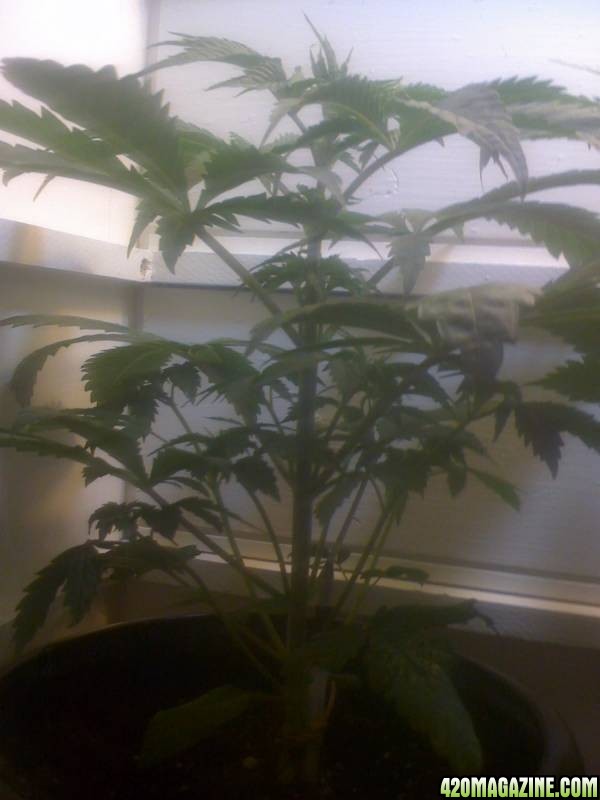 This was the big one. Now they the Same size about. 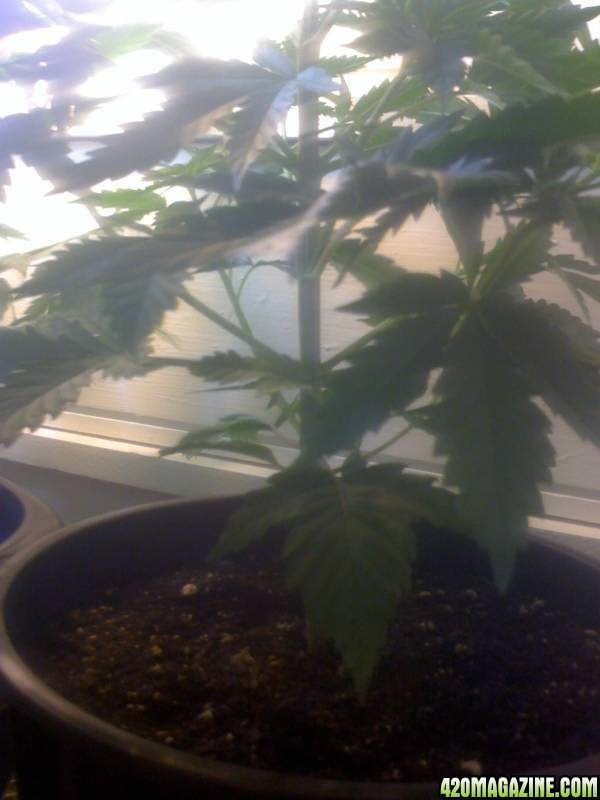 Should we move one? Keep in mind its would be transported in single digit weather. like 5-10 degrees F from building to car and from car to building. I thought i uploaded the pic of the grow space and the two side by side but i guess i didn't. it's on the way. forget it i'll take one when the lights come back on. Oh and the pics are from a camera phone... thats why they look fuzzy...
Who said money doesn't grow on trees?! They must have the wrong kind of tree. :smoke2:
B

Are your cfl's 2" above the plants? This seems to keep the hight down a bit for me. Just wondering.

pretty good so far. i saw MG earlier in a post and i automatically thought this was going to be a short thread. good luck

see the thing is they wer actually really close and that was keeping the height down... but then we altered the dresser a little bit and well we moved the lights too high... they getting to big now. its crazy and we think we may have a male... we have pics on the way.
Who said money doesn't grow on trees?! They must have the wrong kind of tree. :smoke2:
B

I actually think it's good to raise the light up a bit after they start to get bushy. I just had to trim mine and oooh god it hurt

So by allowing them to stretch a bit, then bringing the lights back down, you may be doing both of you a favor

Ok so heres a couple of pics we took we started flowering thursday night. we know we probably cant tell sex yet but we took some pics just in case.

The "Big" One, We were able to use a better camera for these. 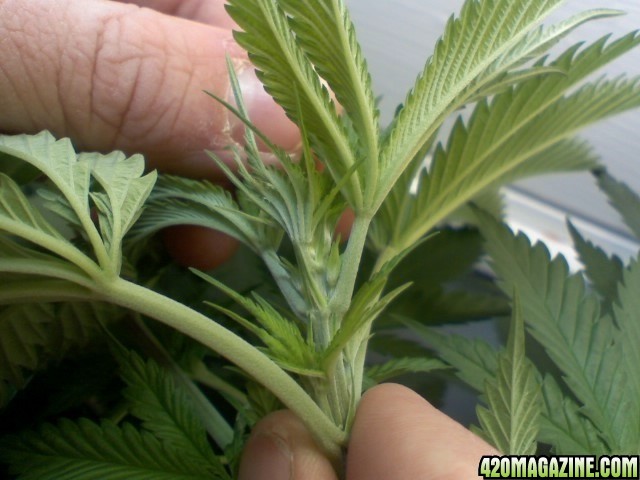 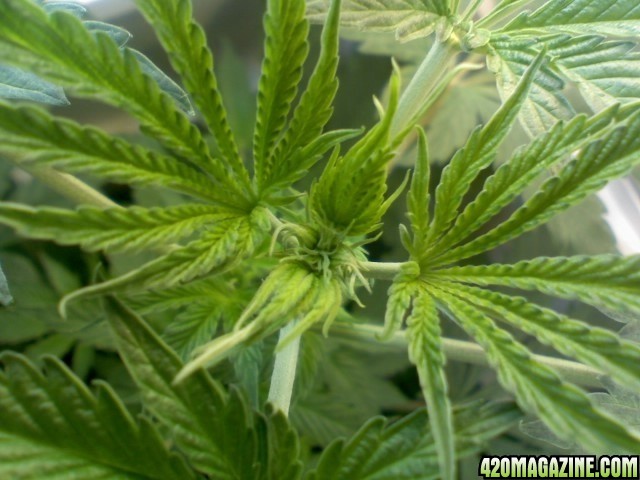 And i do have one of them side by side on the way
Who said money doesn't grow on trees?! They must have the wrong kind of tree. :smoke2:
T

Ok everyone its been about 4 weeks and maybe some odd days, we just switched the lights on friday to a 12/12 set up. The plant in the top picture i believe is male but it could possibly be new leafs and branches forming, Anyone have any input on this?
B

I thought so too. I read that short even node growth means male. But I could be wrong. That was from a breeder in NL.

And in that photo, I see somthing really small, like a ball, but, I would wait.
420 Magazine®
Creating Cannabis Awareness Since 1993

Even node growth shows that the plant is not sexually mature yet, or not ready to be flowered. Once the nodes start alternating, you can flower or take clones successfully. Correct me if I am wrong please.
1st Grow
2nd Grow
3rd DIY Grow
4th Grow
White Russian and White Russian X Blueberry (4th Grow)
White Russian, Purple Kool Aid and Deep Chunk Grow(In Progress)