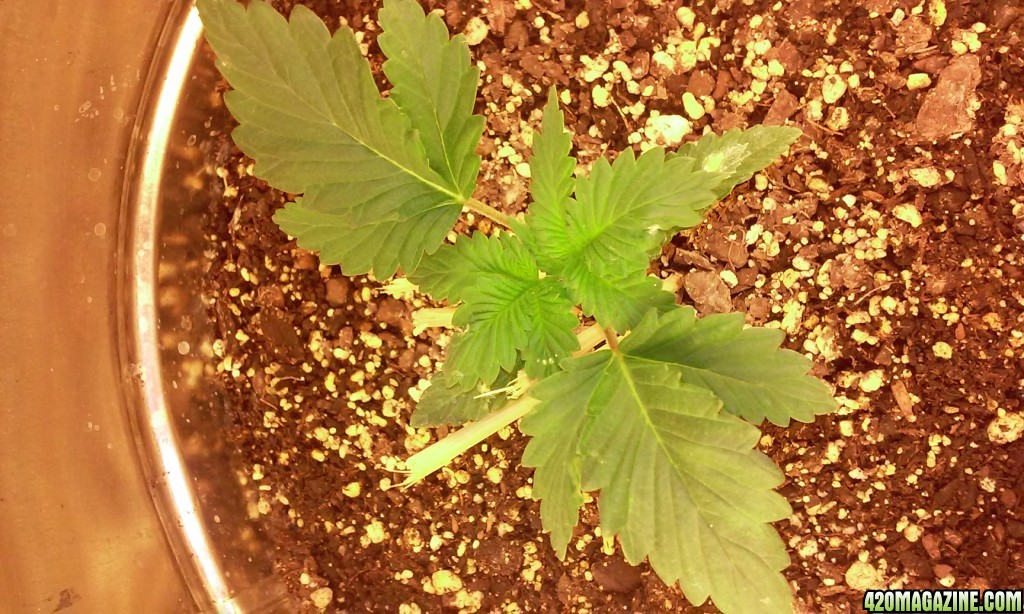 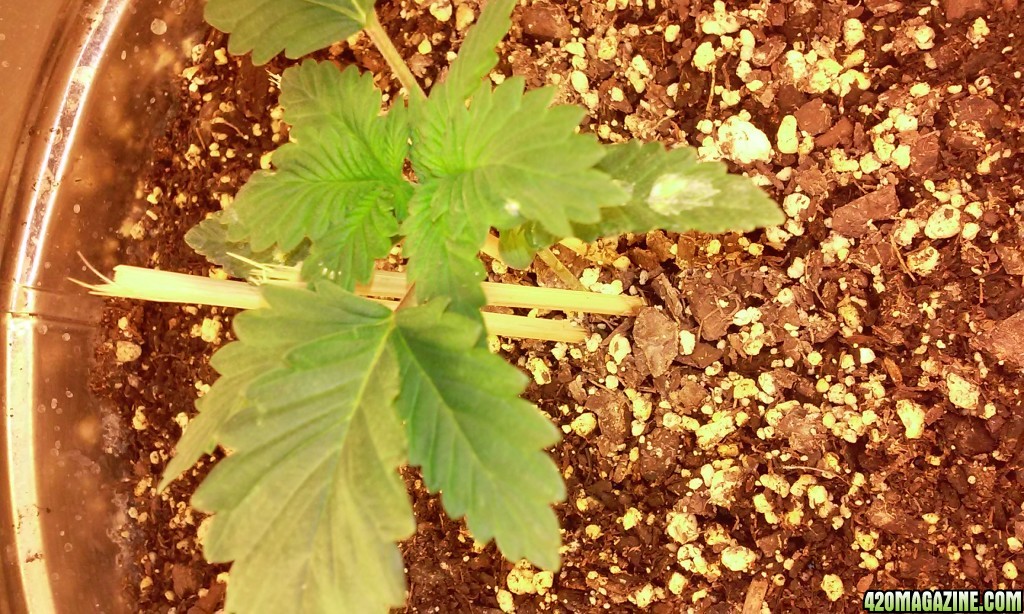 the first two photos is my boss hogg x recon. it has been growing muchh slower than my other plant. looks like it may have slight nute burn? 81 degree fahrenheit and 47% humidity, right now. the high and lows for humidity are 58 and 45. 82 and 77 are the high and lows for temp. granted, the thermometer/ hydrometer has only been in there a few days. this plant went into the soil as a little sprout on Oct. 4th so it's been 18 days vegging. it's in fox farm soil with a very, very small amount of a time release fertilizer ( i originally was following buds for less book. i had a really nice plant that unfortunately was a male, so i had to pull it. and these two i was following the book still but only put a tiny amount of the fert.) next time i'm getting a much better book, i just thought it'd be more simple for the first round. i've put small amount of fox farm fert in liter sized water bottles on the fifteenth of oct., and a 1/2 tsp of molasses in a normal sized bottle of water on the 17th., on the 20th it got a 1/2 tsp of magical in a liter of water. yesterday (the 21st) i flushed it with 1 liter of DISTILLED water. this was the first time i got distilled water. before this i used filter water thru the fridge and left it with the lid off for several days before use to evaporate chlorine. but now i have distilled so that wont be an issue. it is in a 3 1/2-4 gallon container. have not seen any pests. it is being grown under 4 CFL's, i will increase to 6 when it's a little bigger. 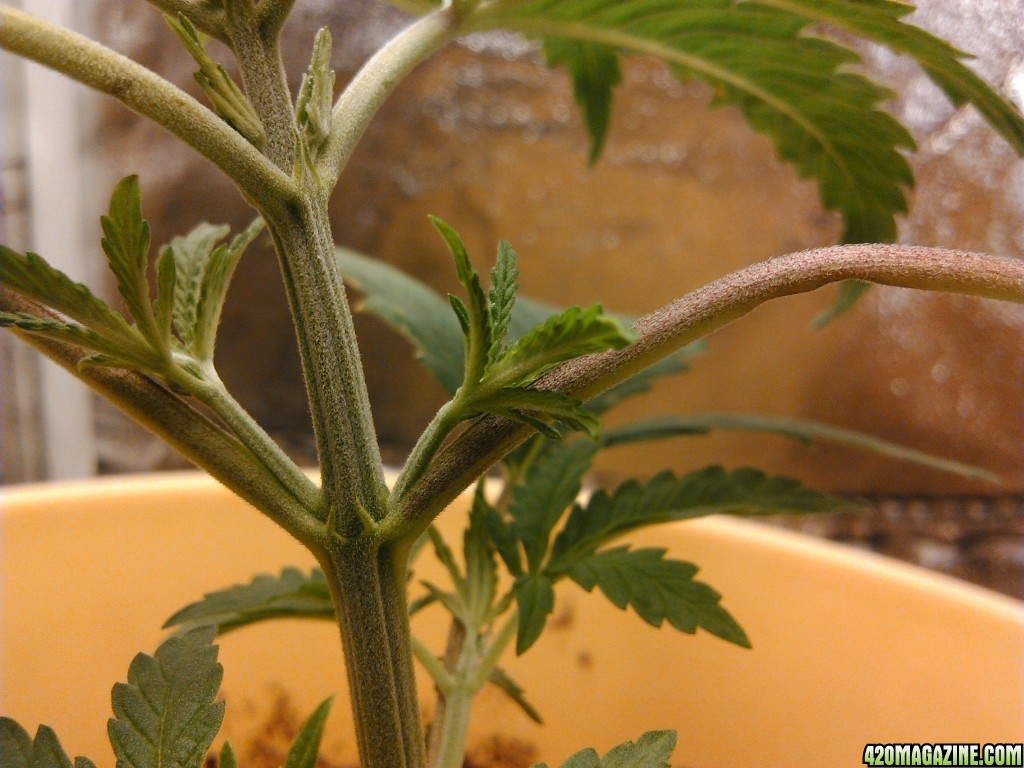 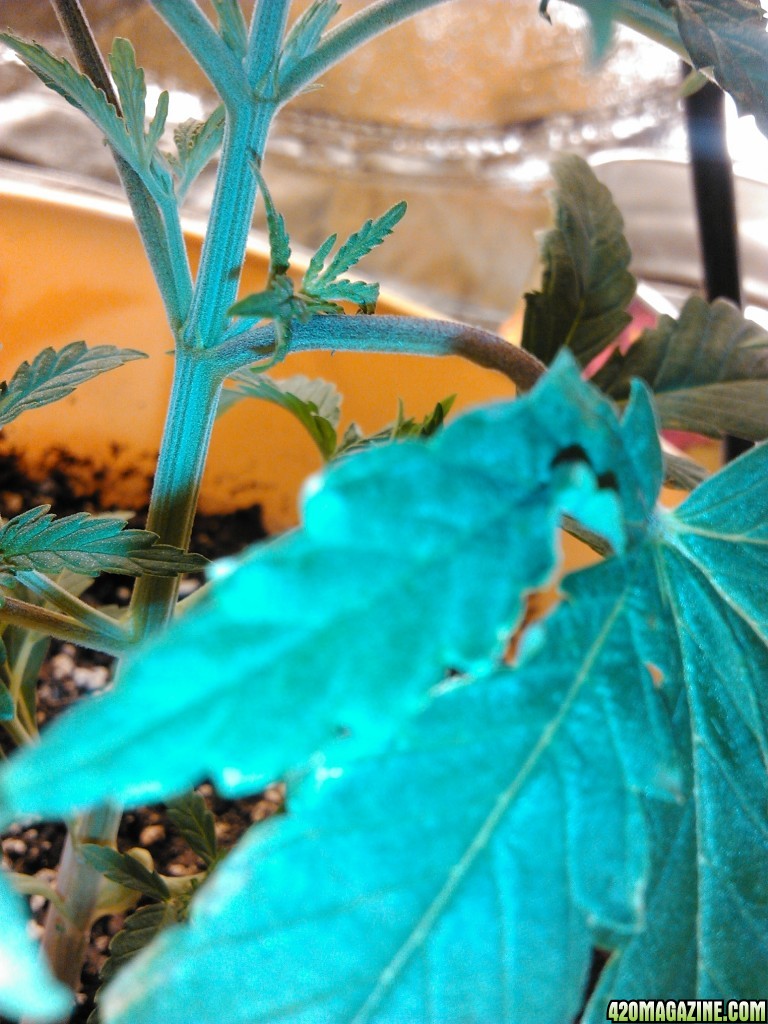 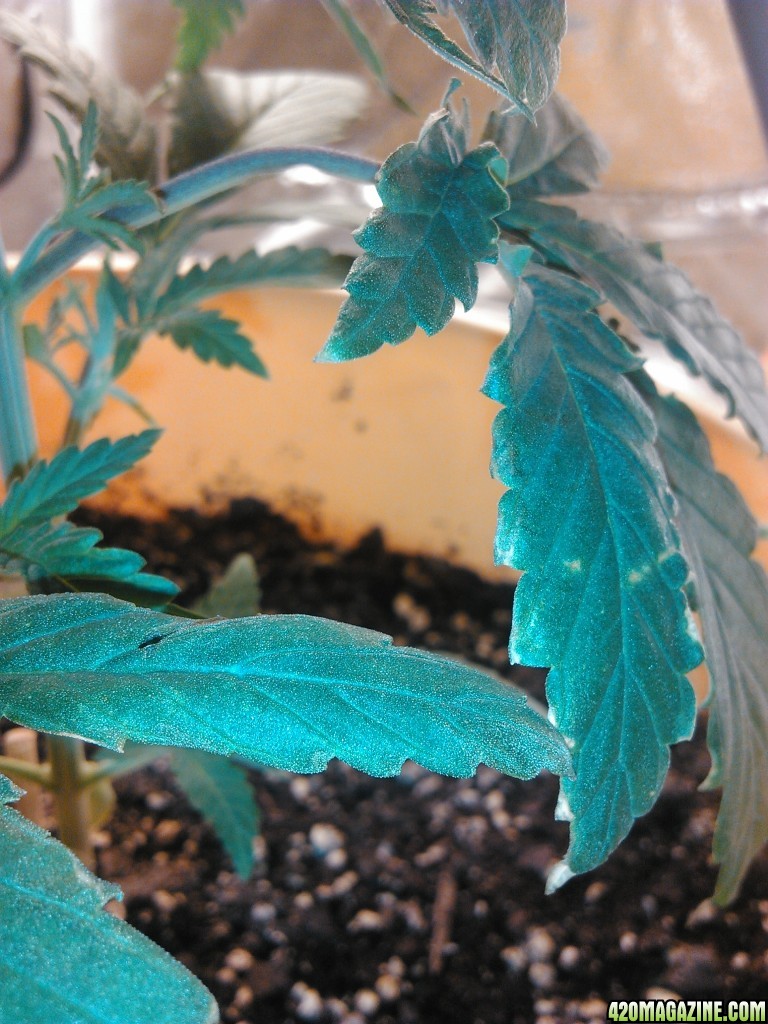 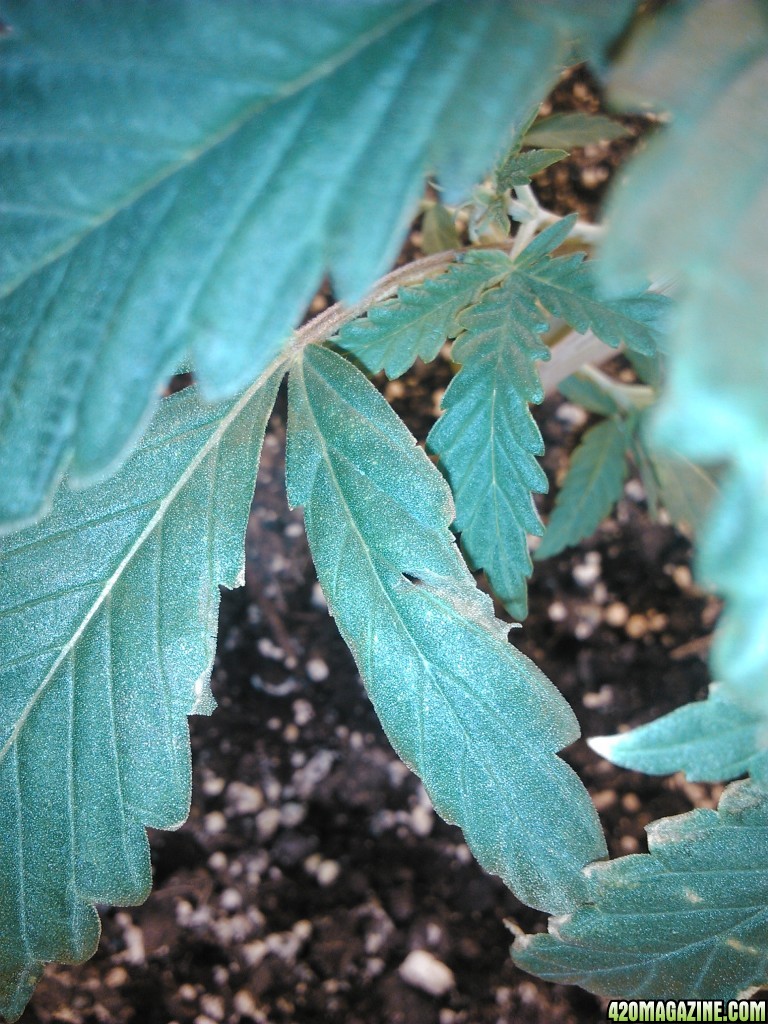 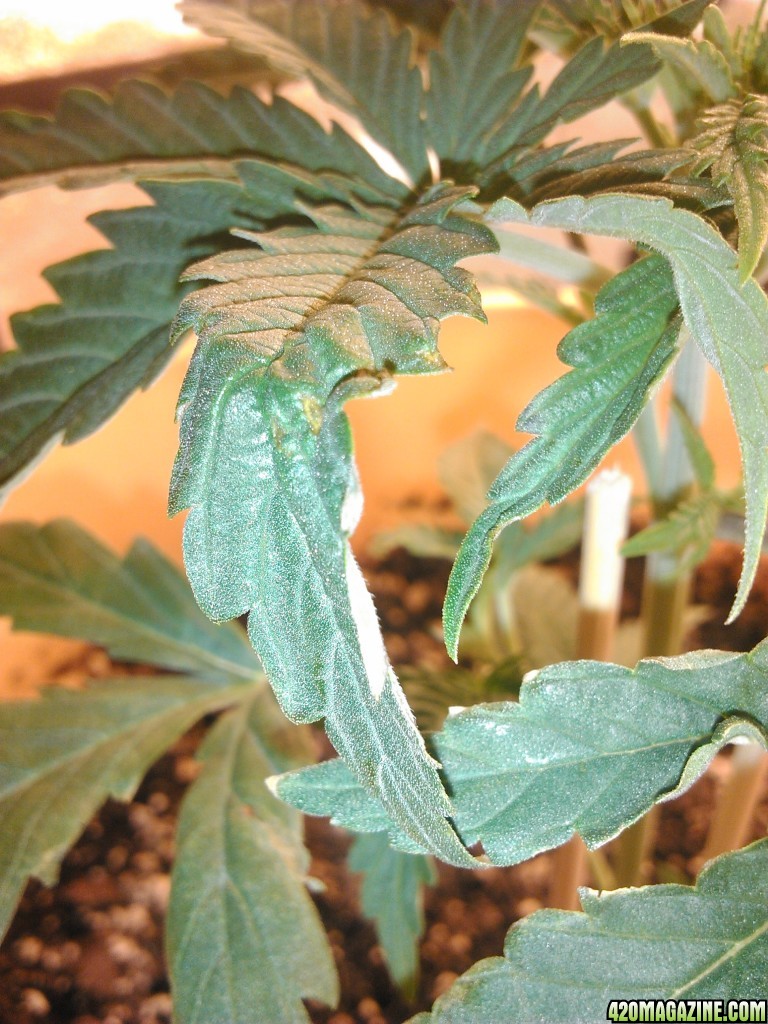 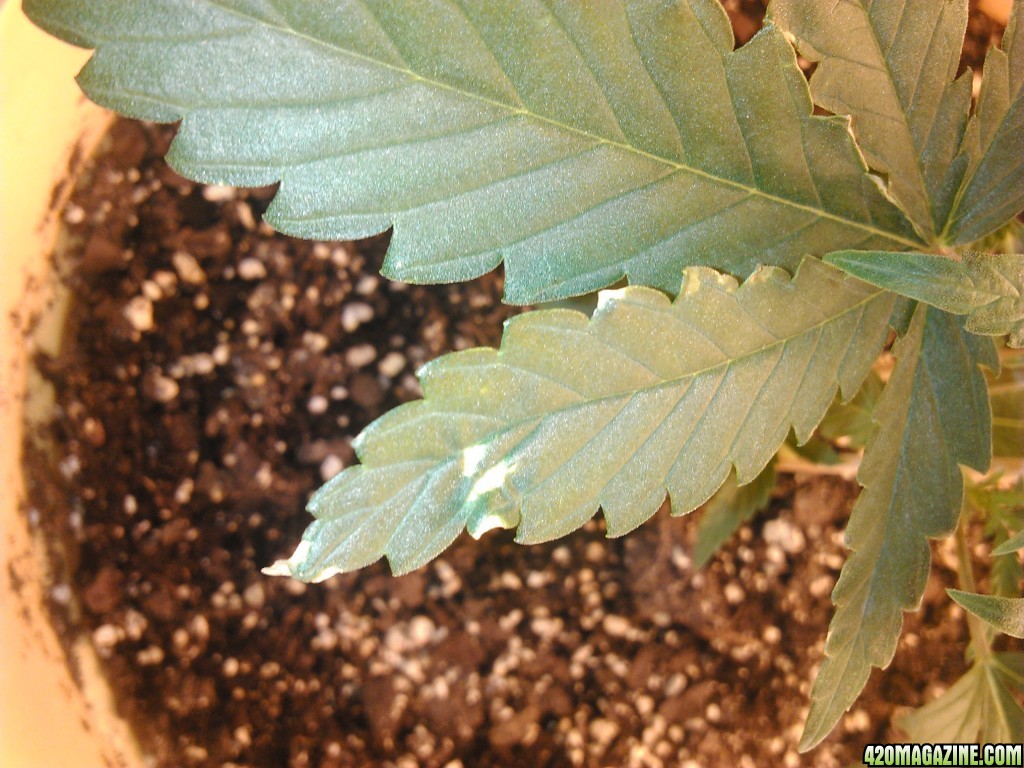 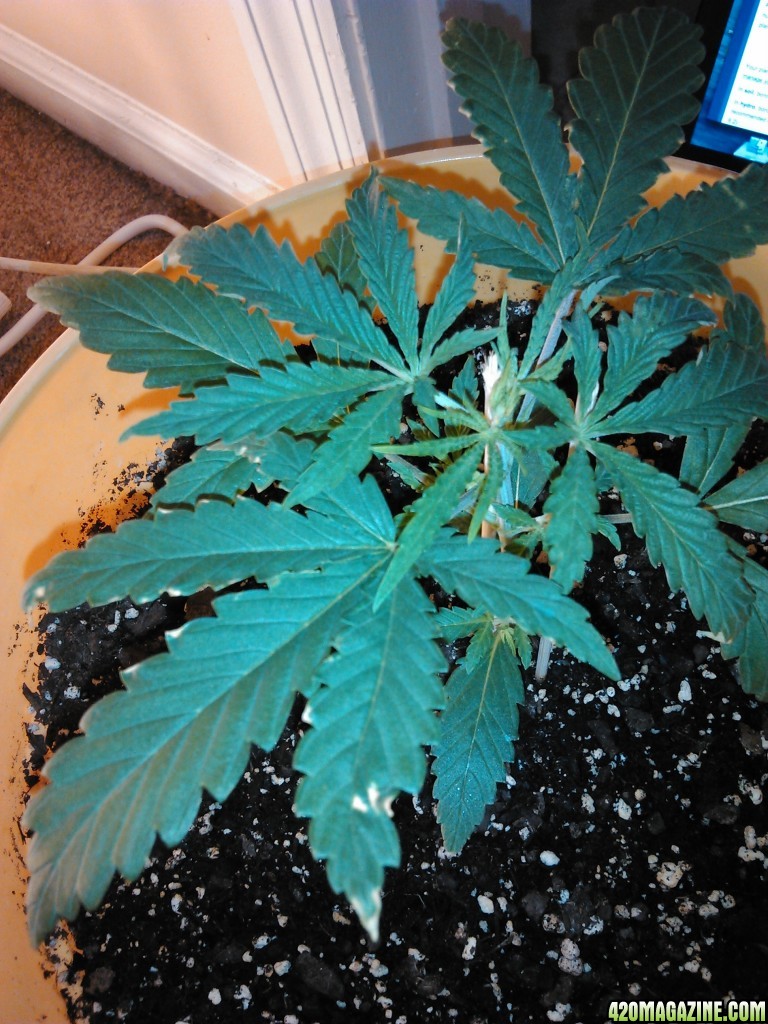 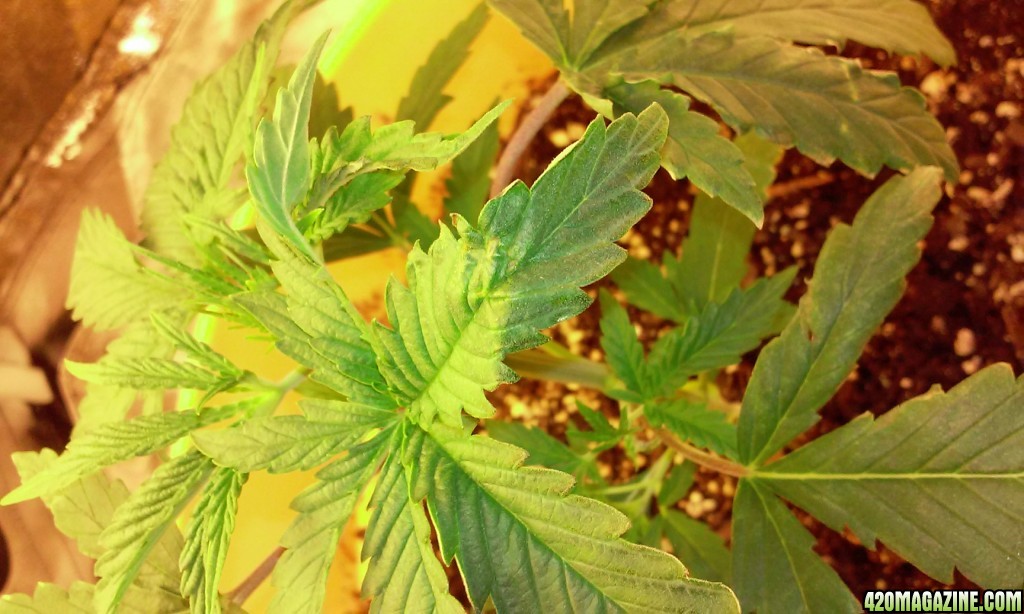 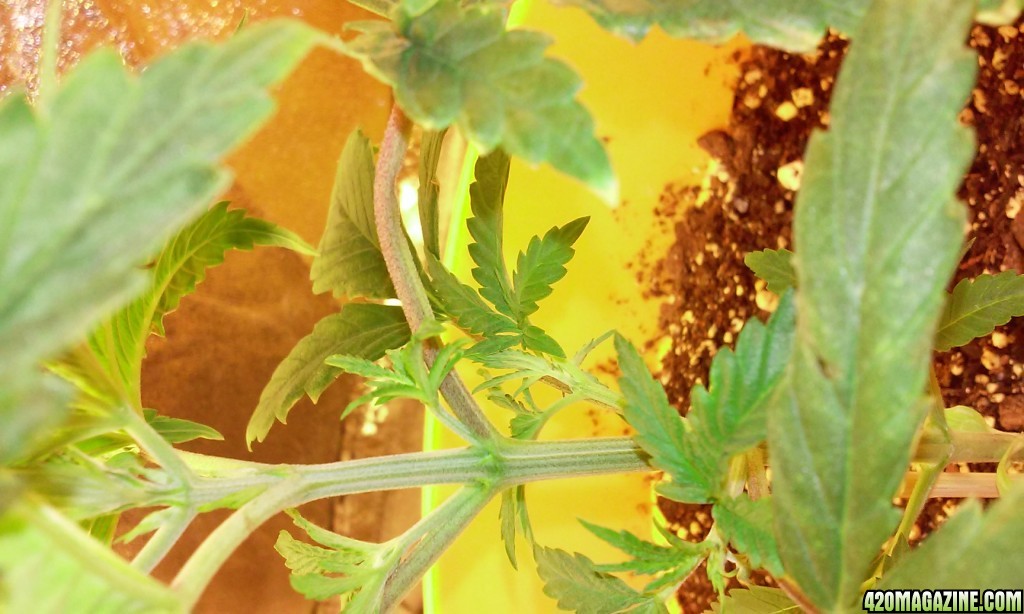 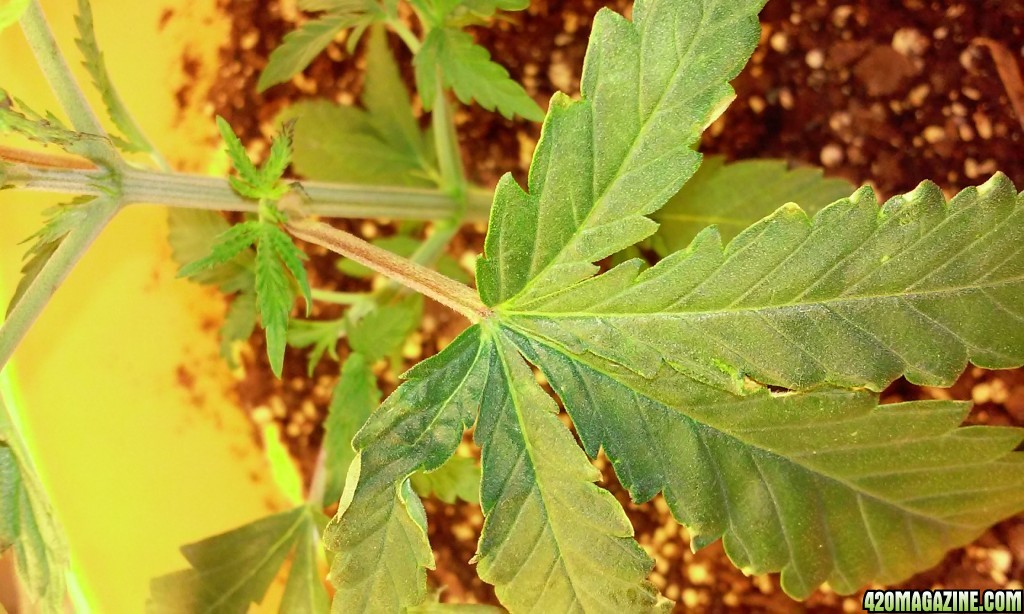 those next photos are lsd x headband. it is a 3 1/2 gallon container. it was planted a few days before the boss hogg x recon. it has been under the same conditions as the other plant, except that it is under a large fluorescent light, and it has been fed the fox farm nutes at least one extra time. there are also three fans in the room.
S

it's in fox farm ocean forest soil. I had a hanna ph stick that just crapped out, i'm looking to get a new one. the last watering i did as a flush b.c i was thinking it was a nute problem i just put a liter of distilled water in each b.c the ph meter didn't work. but i'm thinking maybe it was inaccurate throughout the whole grow so far, i guess no way to tell for sure, but i need to grab a new ph test asap.
S

i didn't think the fox farm ocean forest soil was coco? am i wrong?
D

You are right, it is not coco, but it does have a lot of organics added to it, worm casing, bat guano are a few and it should be good 3-4 weeks with out adding any nutes. I would probably flush good and give a few days to dry and see how they are doing

ok true thanks so much i'll be trying that

The time released ferts, did you put that in the bag or did it come incorporated into the soil?

That in combination of feeding may very well be your issue.
In Progress
600w/400w Multiple room SCROG/Clone/Veg/Mothers + Multiple Strains
https://www.420magazine.com/forums/...e-strains-multiple-rooms-3-a.html#post2656521

it is osmocote smart release plant food, flower & vegetable. i put a very small amount in the top third of the soil, like probably less than 20 of the little fert. balls (though that may be even more than i actually put in, i put very little). next time i'm definitely not putting any, but i was originally following the buds for less book (with my own changes here and there) and the book said to put the fert.
it has definitely been a learning process but i'm continually learning more! :]
D

Let us know how she doing in a few days, You need anything will try to help.

Were all still learning

Your issue is probably the time release ferts combined with regular feeding probably stunted her growth. Leave the time release capsules alone for sure next time, FF is great soil with great byproducts in them to help it grow! After that it's just regular feeds for her and she will survive.

Trial & Error is the only way to get to certain knowledge.
In Progress
600w/400w Multiple room SCROG/Clone/Veg/Mothers + Multiple Strains
https://www.420magazine.com/forums/...e-strains-multiple-rooms-3-a.html#post2656521

thanks DSXJ it wont be going in my soil next time!!
S

so i was just reading in this forum, do you guys think there is any truth to this guy saying adjusting ph for soil is unneeded??
https://www.420magazine.com/forums/...h-when-growing-soil-damaging-your-plants.html

sf42091 said:
so i was just reading in this forum, do you guys think there is any truth to this guy saying adjusting ph for soil is unneeded??
https://www.420magazine.com/forums/...h-when-growing-soil-damaging-your-plants.html
Click to expand...


Your Soil PH will change by the PH of the water you're putting through it frequently. That is why it's best to have a constant water ph of 6.0-7.0 in your water. My tap water comes out at 7.9 but once I add my nutes it comes down to about 6.0 that in turn makes it a ok to water with. Some peoples tap water comes out at different ranges so adding nutes will change the ph of the water. Water the plant with 4.0ph three times in a row you start to rapidly decrease the PH in the soil and make it more acidic in turn leading to issues. PH levels play a crucial role for nutrients being absorbed. Ill try and find the chart I got somewhere here
In Progress
600w/400w Multiple room SCROG/Clone/Veg/Mothers + Multiple Strains
https://www.420magazine.com/forums/...e-strains-multiple-rooms-3-a.html#post2656521

M
Help it is having issues! pics