Student volunteers and staff at Western Kentucky University began harvesting the university's first hemp crop today. The crop was planted at the WKU Farm on June 3 as a joint project with the University of Kentucky. A total of 13 different types of hemp were planted at the WKU Farm.- This afternoon,-agriculture professor Todd Willian associate professor Paul Woosley were on site with student volunteers to harvest hemp that was planted to collect data on fiber production of the crop and optimum nitrogen levels needed to grow it. Another set of hemp plants will be harvested later to collect data on seed production of the plant, Woosley said.

Volunteers cut and bundled the tall, leafy plant by hand.- It will later be shocked and left out in the field, Woosley said. Exposure to the elements will help to separate the fiber of the plant. The process is called retting. After data is collected it will be shared with staff at the University of Kentucky where it will be compiled and referred to the Kentucky Department of Agriculture, he said. The plant must ultimately be destroyed after data is collected, Woosley said.

Though the market for hemp is yet uncertain, it is versatile in its uses, Willian said. The pith of the plant can be used for high quality bedding while fibers can be used in products ranging from clothing to concrete. The seeds of the plant also have many uses. "It's got a lot of potential products to be made from it," he said. Hemp is related to marijuana, and both contain the chemical that gives marijuana users a high — tetrahydrocannabinol, or THC — but the trace amounts in hemp aren't enough to produce a high.

A provision in the Agricultural Act of 2014 allowed state departments of agriculture and institutions of higher learning in Kentucky to grow industrial hemp as part of pilot programs to study hemp growth and marketing. Before that act was signed into law, Kentucky passed Senate Bill 50 in 2013 to allow the cultivation of industrial hemp. The bill set up a framework cultivation if it were to become legal on the federal level. It became law without Gov. Steve Beshear's signature. Into the early 20th century, Kentucky was a leading producer of hemp. But in the 1930s, laws began to limit production. A marijuana tax passed in 1937 taxed hemp growers at a level that made it unfeasible to grow. During World War II, hemp was grown for the war effort, but in 1970, it was grouped with marijuana and outlawed. 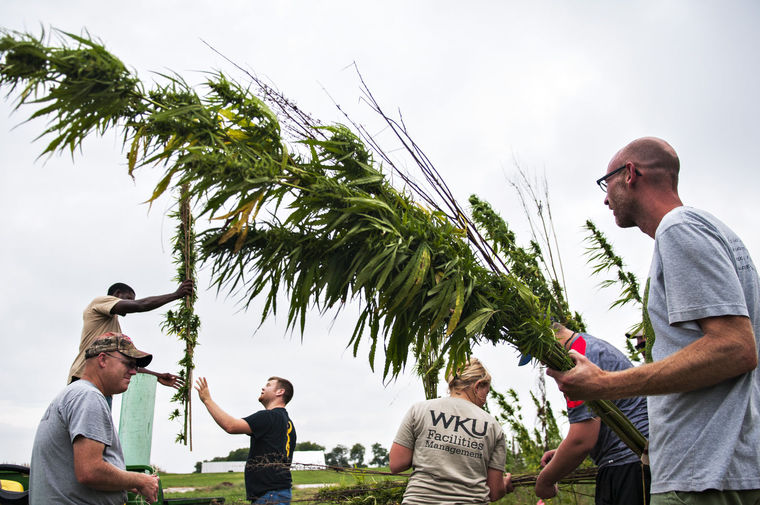