First real grow, clones, autoflowers & random seeds: need all the tips and advice I can get!

Hello everyone,
This is my first real grow. Currently have 12 plants growing. 7 clones ( Green Crack, Sour Diesel, Skywalker, Platinum, Big Bud, Cookie Glue, XJ-13), 2 Autoflowers ( Critical Purple and Gorilla Glue), Seeds ( 3 random seeds from some Reggie). I have some Feminized White Widow on the way. I have them all in fox farm ocean forest soil with great white shark mycorrhizae. When I water them I PH my water to 6.2 and add HRs +Life and dirty veg+bloom. I also add some mammoth P active microbial. I have a 9x10 garage that I can use for growing. During the day I leave them in direct sun light. When it starting to get dark or to windy I bring them inside where they are under 4 T5s on a timer. I had them at first on 18-6, but now I have them on 20-4. I have a bunch of fans in the room and I let it air out everyday. I have a hummifder running. So the room is usually around 78-84 degrees with a humidity level 55-62%. I have a couple questions. Is it a good idea to be moving them like that? If the T5s are actually a good grow light? Should I buy a different light or more T5s and be able to expand and use the whole room, cause I do want some more green friends. Is the nutrients I’m using a good idea? How high should I have my lights? Im open to all options, please send some advice my way! 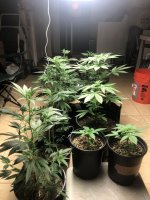 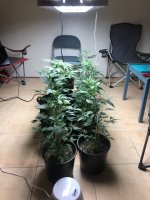 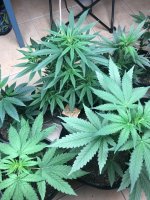 First tip I'd offer would be to stop trying to grow inside a larger open space like that and size my grow space to the lighting, then fill it with plants. And use something for wall material/covering that's highly reflective to light, such as Orca Film or just prep, prime, and then paint the walls with the brightest white paint you can get (flat by preference, but flat paint isn't something you can clean, while something like eggshell can be scrubbed if necessary). A significant percentage of those light's output is getting wasted (unless you consider being able to sit in one of those chairs and read the newspaper to be as equally important a use for those grow lights as growing cannabis with them is, of course

They're going to cost you the same in electricity each month to run the things whether you're using all of the light they produce to grow plants or not, so you might as well do that with them and go spend ten bucks on a cheap desk lamp to read the paper under. . . .
Respectfully,
Tortured Soul

Thanks! I was thinking making a grow tent line everything with. I saw a lot of different things about Mylar sheeting. I’ll look into the orca brand! Do you have any recommendations for everything else?

Probably, lol; like most folks I have opinions on many things. But they're mostly just that, opinions. Others' will differ (and some may be more useful than mine).

I just noticed that you've posted this thread in the "Introduce Yourself" section (I initially saw it by hitting the Unanswered Threads link). So, knowing that:

You might get a lot more answers to specific questions if you ask them in one of the "growers' " sections of the forum. Not everyone monitors this area (or at least not rigorously and regularly).
Respectfully,
Tortured Soul

Awesome, well thanks for the help so far. Never been on a forum before, so this should be very interesting.

@TorturedSoul took your advice and build a little grow tent, still fixing it up and putting on a door. 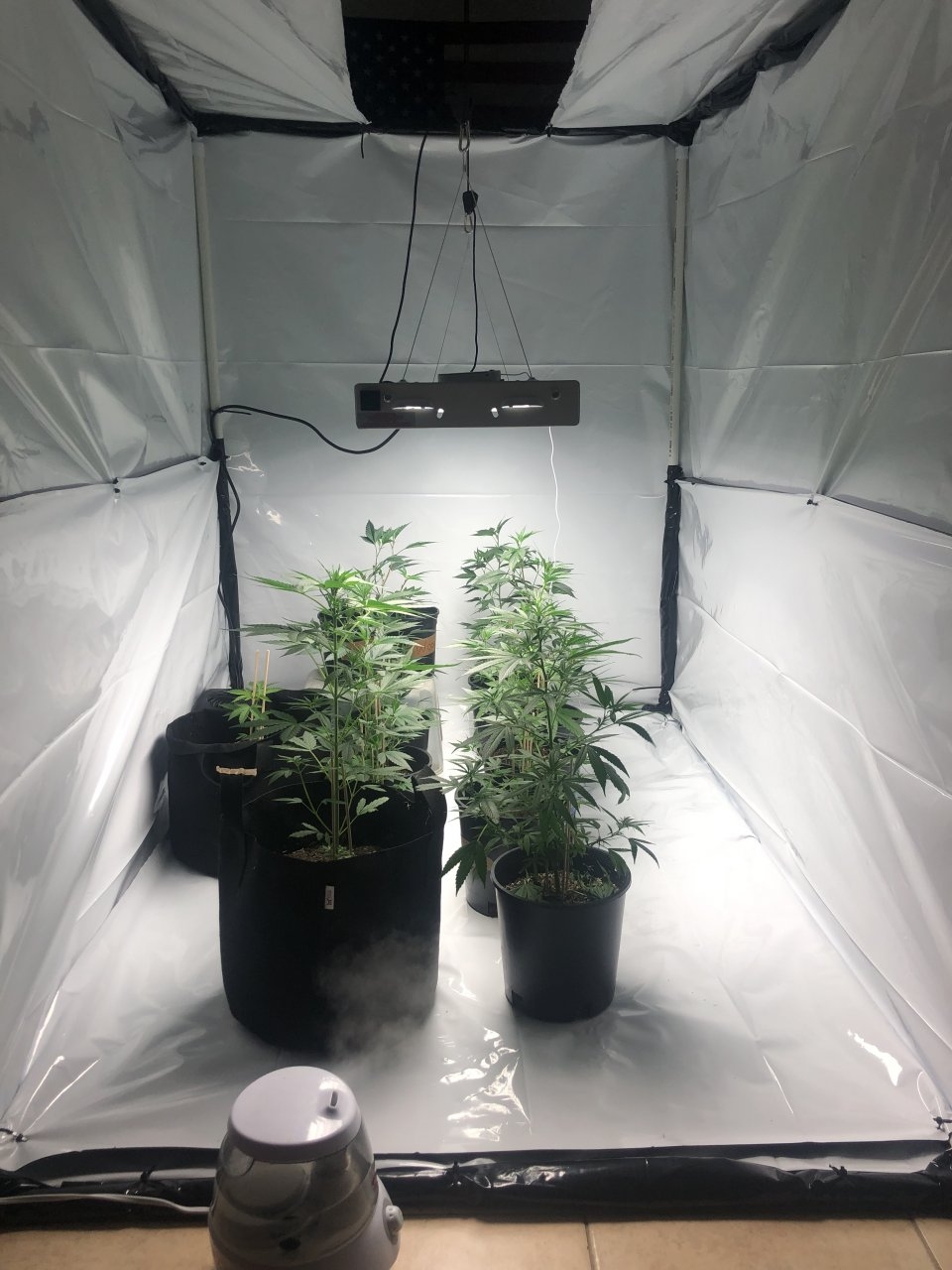 MVcowboy said:
Thanks! I was thinking making a grow tent line everything with. I saw a lot of different things about Mylar sheeting. I’ll look into the orca brand! Do you have any recommendations for everything else?
Click to expand...

a nice 6x6 would do nice there

a helpful link for newbies

didn't see the tent before I posted looks good sir

a helpful link for newbies

So its 6x4x5 feet, I made it out of pvc, film, and a shit ton of zip ties. Costed around 125 bucks to make. @TorturedSoul

Lots of bonuses to growing in a tent, you'll be glad you made the effort

Barney's Perpetual Hydro House
All you need to know about how to feed in Coco
How to feed a reservoir. (Non recirculating)

Do you think I have to do anything different for my growing style? @Barney86

MVcowboy said:
Do you think I have to do anything different for my growing style?
Click to expand...

I know you're not asking me,but I suggest you top them-so you can have at least 4 main tops,instead of just the one on each plant....

MVcowboy said:
Do you think I have to do anything different for my growing style?
Click to expand...

If you've never grown in an enclosed space before, be sure to monitor temperatures.

That $125 seems like a lot for a homemade setup like that. I assume the bulk of the cost was the Orca film, if that's what you bought to make your walls with? I've read that this stuff has about the highest light-reflectivity ability you can get in a product of that sort; I even watched a video in which someone held one of those PAR light meters on the floor of a grow tent while a helper reached in and hung Orca film over each of the tent's walls - and the meter reading went UP each time. Therefore, one could look at it as a value even with the high price of admission. The difference in yield between plants grown under artificial lighting in a large open area and one where that light is kept inside highly reflective walls could easily be more than 28 grams, lol, and $125 won't buy an ounce of good cannabis in my neck of the woods.

Just be sure that you have properly matched the size of your new grow space to the power of your lighting. You'd lose the above advantage if the light is underpowered for the space. Also, if you can easily tighten up those walls a bit in order to remove the "bagginess," it would be helpful. But this isn't an absolute necessity, so don't take a chance on destroying the thing if that's a possibility.

In addition to monitoring temperature, it's a good idea to monitor the space's relative humidity (especially later in flower). If your space is heat-cycling (warm during lights-on, then cool after they shut off), you'll see a spike in RH at "night" because cooler air cannot hold as much moisture. In extreme cases, this could lead to condensation and, worse, moldy buds. Good airflow tends to prevent this. But even so, if you're growing plants that produce dense buds, pay close attention.

Enjoy your new custom grow space. Improve it as and when you can, and take satisfaction in the knowledge that YOU built it.
Respectfully,
Tortured Soul

It was like 40 bucks for all the pvc, the rest was the film. I ended up buying this huge role that was like 100 feet long by 10 feet. So I could use more for other grow boxes for the future. Also I have a humidifier that I keep it around 54-65%. So my temp stays around 78-84 degrees @TorturedSoul

You don't have to "page" me every time you reply. I - like most here, I assume - have my account configured so that I'm automatically subscribed to any threads that I post in.

It's handy for inviting someone into a thread who is not already aware of it, though. Or to get someone's attention if they're subscribed but happen to "fall behind" on it. That can happen if the person is subscribed to a lot of threads, has an occasional absence of more than a few days, or both. Er... so you might end up using the function to get my attention one of these days, lol.

That's a good temperature range. They do fine in reasonably hot temperatures as long as there's enough moisture available for them to transpire moisture (self-cooling function) from the tiny stomata in their leaves, enough airflow through the canopy to help evaporate that moisture and carry it away, and the plants are receiving enough light energy.

If you can prevent the temperature during the dark period from falling more than 10°F, that'll be good, too.
Respectfully,
Tortured Soul

My bad, still getting the hang of this thing

carcass said:
I know you're not asking me,but I suggest you top them-so you can have at least 4 main tops,instead of just the one on each plant....
Click to expand...

Never topped before. So what I understand is that I just cut the tops of the plants a couple inches down from the top

I didn't realize that a few of them are autos (didn't read close enough the first time)
You probably shouldn't top the autos this late in the game..I don't think you say how old they are,
but judging by size,the autos are either flowering already,or they're pretty close....

Usually,topping is done earlier,so at this size you could either just snip the tops off,or top them down above the 4th node-you'll be cutting off about half the plant that way,but they'll recover pretty fast.
You might run out of headroom in there if you don't do something to control the height-5 feet sounds like enough,but if you figure in the height of the pots,and the length of the cables hanging the light,you've actually only got about 2.5 feet for them to grow....
You can shorten the cables on the light hanger to pick up another foot or so in there if / when they start getting too close to the light....it's fine for now,but down the road you may need to do it.
Type "Topping Techniques" into the search box if you'd like to research the different ways you can top them
to not only control their height, but also improve your yield.