First time grow here. I got a seed in a bag of very fine quality bud from a past friend, who is now imprisoned for some heavy marijuana related offenses. I figured what better way to honor him than to grow it!

I know being broke isn't a good time to grow, but with all the down time lately I just said why the hell not and germinated the seed. I know Miracle Grow is frowned upon, but I had just enough sitting in the garage at the time, so that's what I'm using. This is going to be a little confusing as I'm already currently into flowering and have not kept track of plant age or weeks of anything.

I sprouted it in a small container, quart maybe, and then transplanted to this bigger black container when it gained a little height and some leaves. I know it's pretty small, but thats for plant height purposes and I don't have any more soil anyway.

I've had some minor gnat issues. When I do, I start spraying every other watering or so with a 1/4 hydrogen peroxide to water mix. I've also had two little cups of vanilla extract with holes poked in plastic covering them inside of the grow space the entire time, and outside of it I have an apple cider vinegar trap.

I've also recently started using a little Algoflash 6-6-6 every other watering, as its the only nutrients I have for it.


This thread is going to be a little spread out at first as a recollect and organize it, but heres some pictures of her! Deemed "Saulina Dromez" after a name change from the original "Saul" and drunken banter about salina gomez after finding out the plant was female. 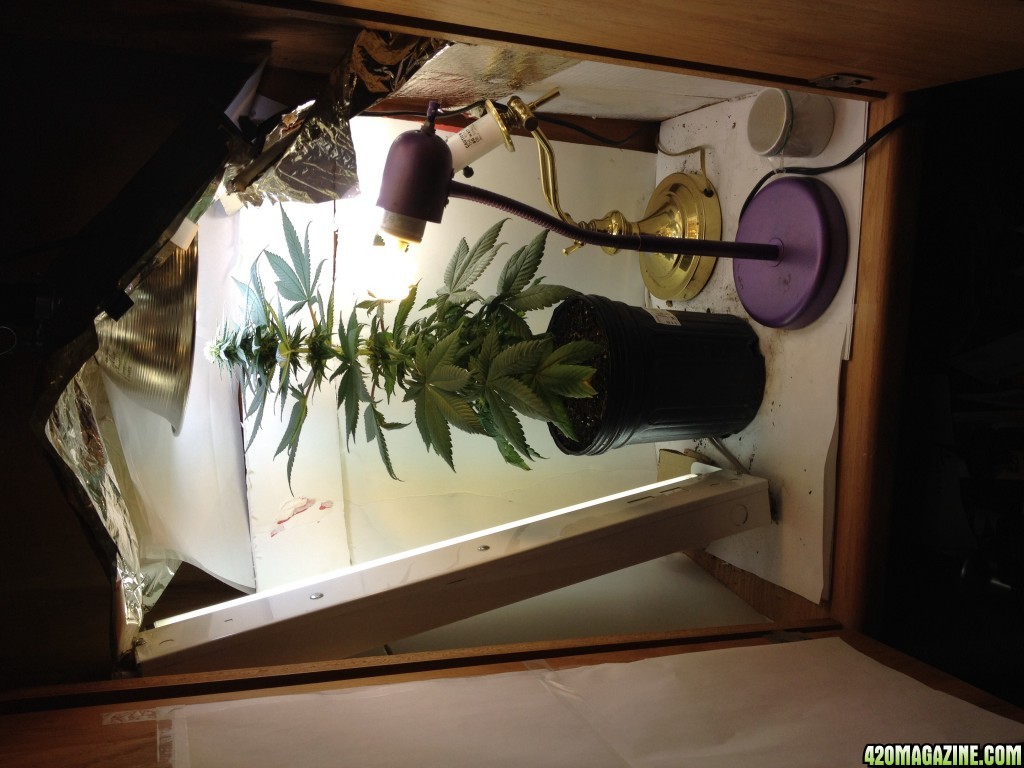 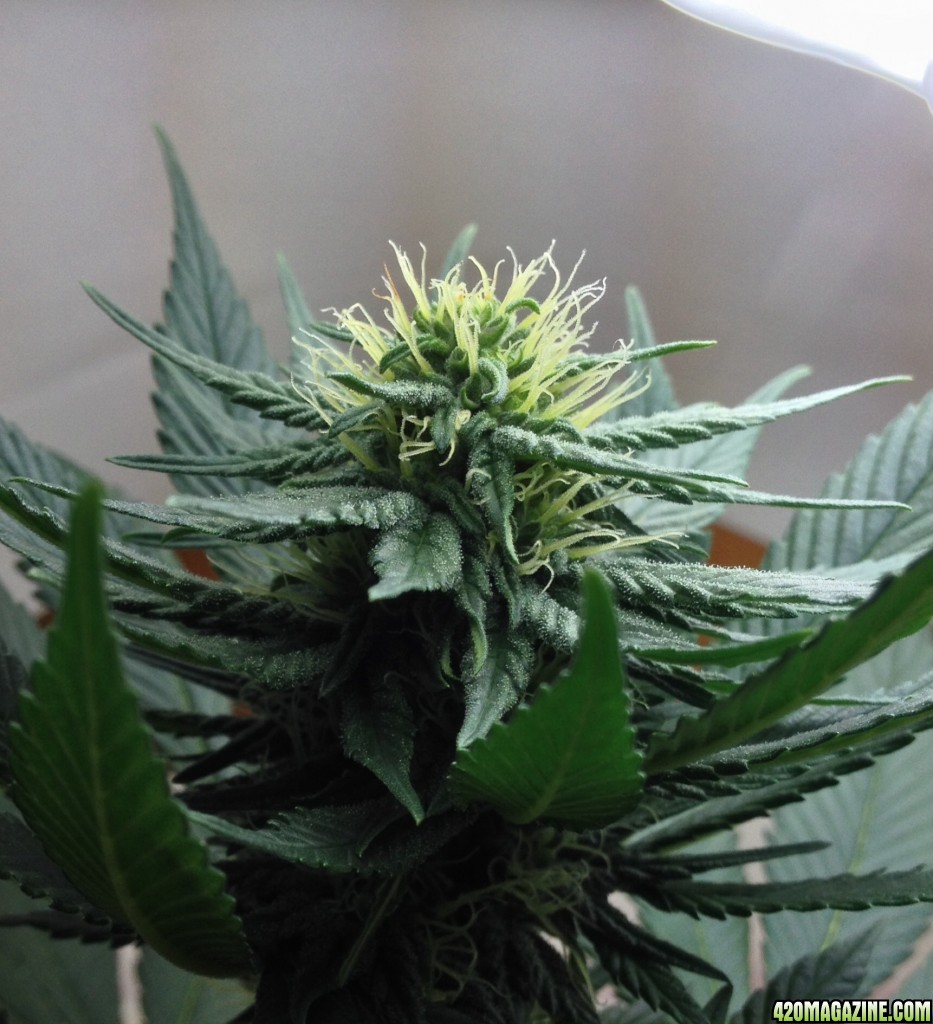 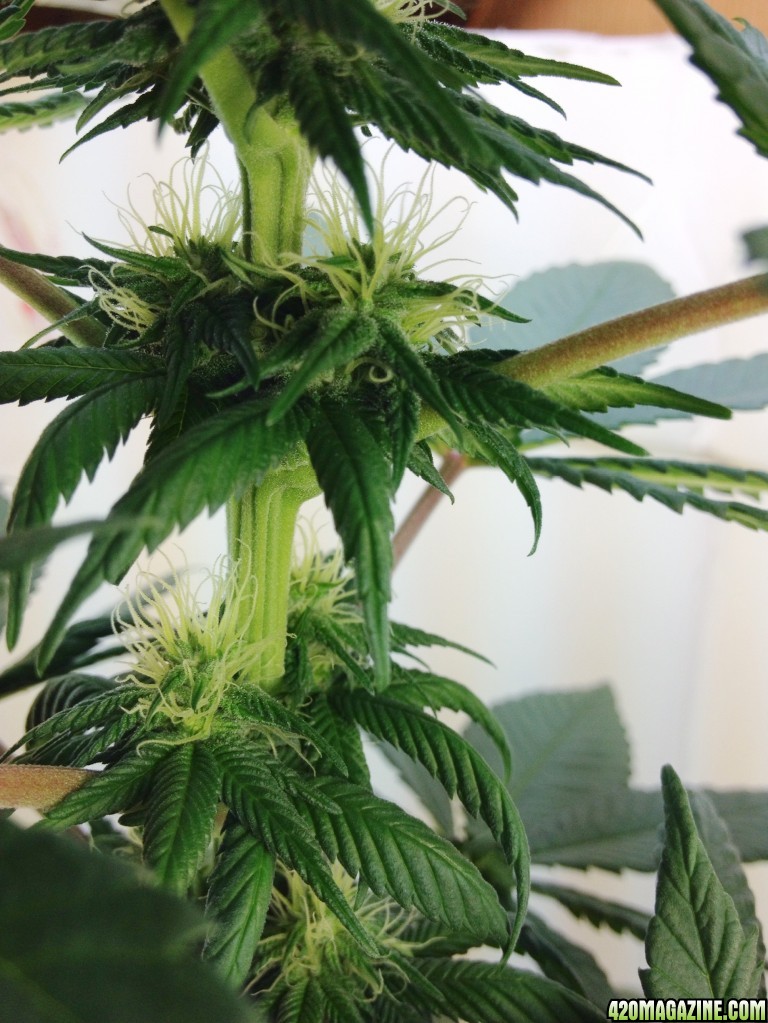 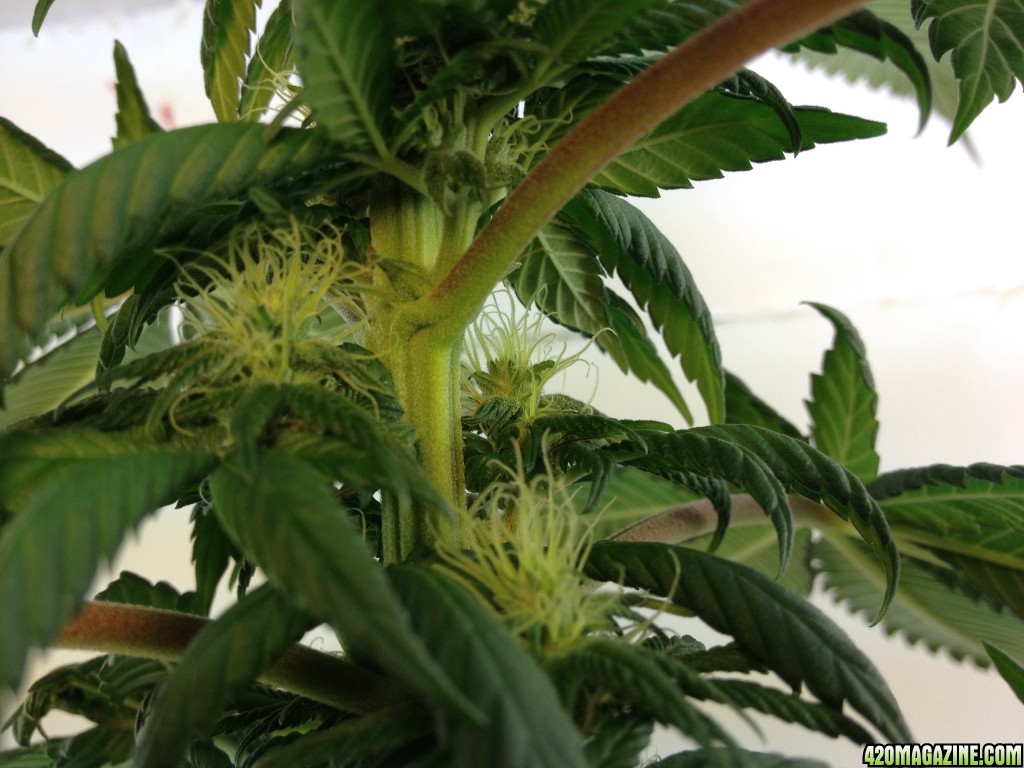 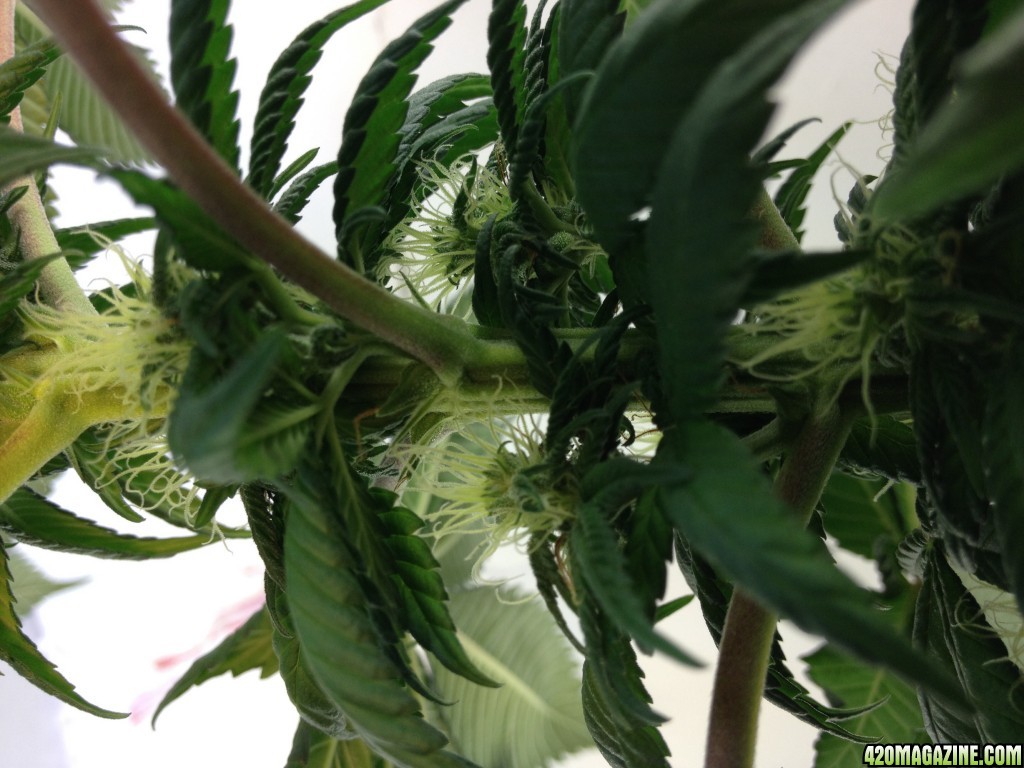 Let me know what you guys think so far and any questions you have, again I'm sorry for not keeping track of how many weeks its been in flowering or even how old the whole plant is!

I'm starting to get really curious about those calyx's found in the last two pictures on the main stem at the base of the fan leaf stems(nodes?)

The hairs coming out of them are already all orange, and I find their placement a little odd. Are they maturing much quicker than the rest of plant? Can they be cut off soon and smoked with no downside to the plant?

I'm also starting to wonder how much I'll actually yield off of this with such low wattage. 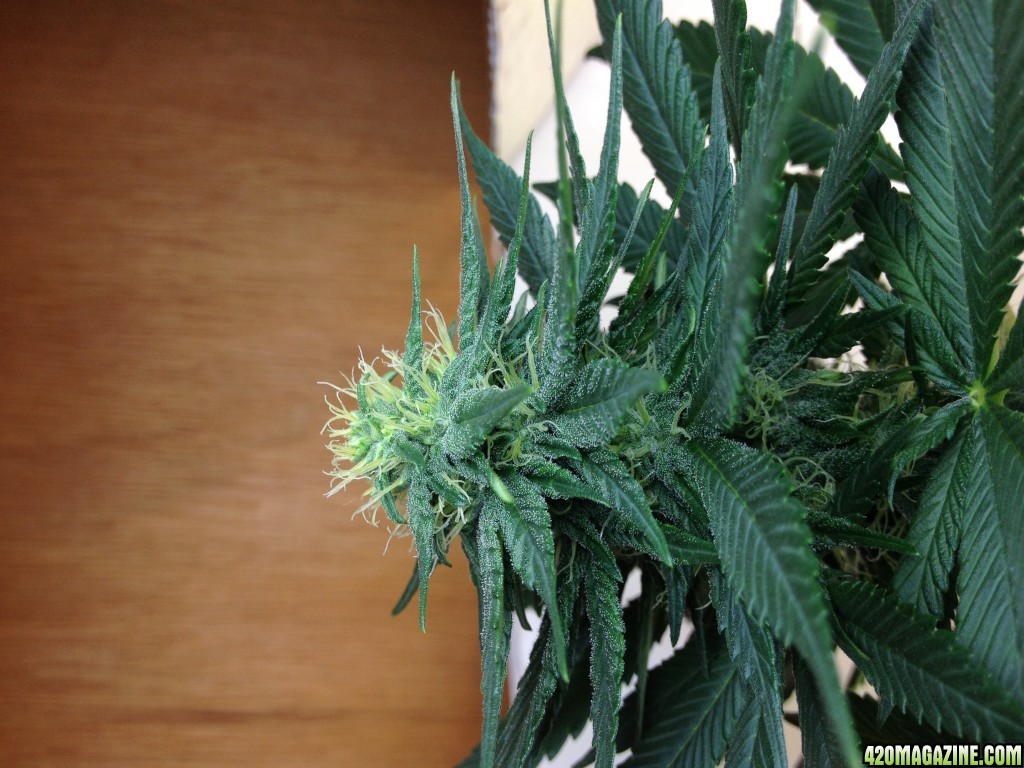 And I forgot to mention, I believe the strain to be White Domina.


Today I started adding 1tbsp of blackstrap molasses per gallon of water in every watering. Still using a little algoflash 6-6-6 every or every other watering depending on my gut instincts. 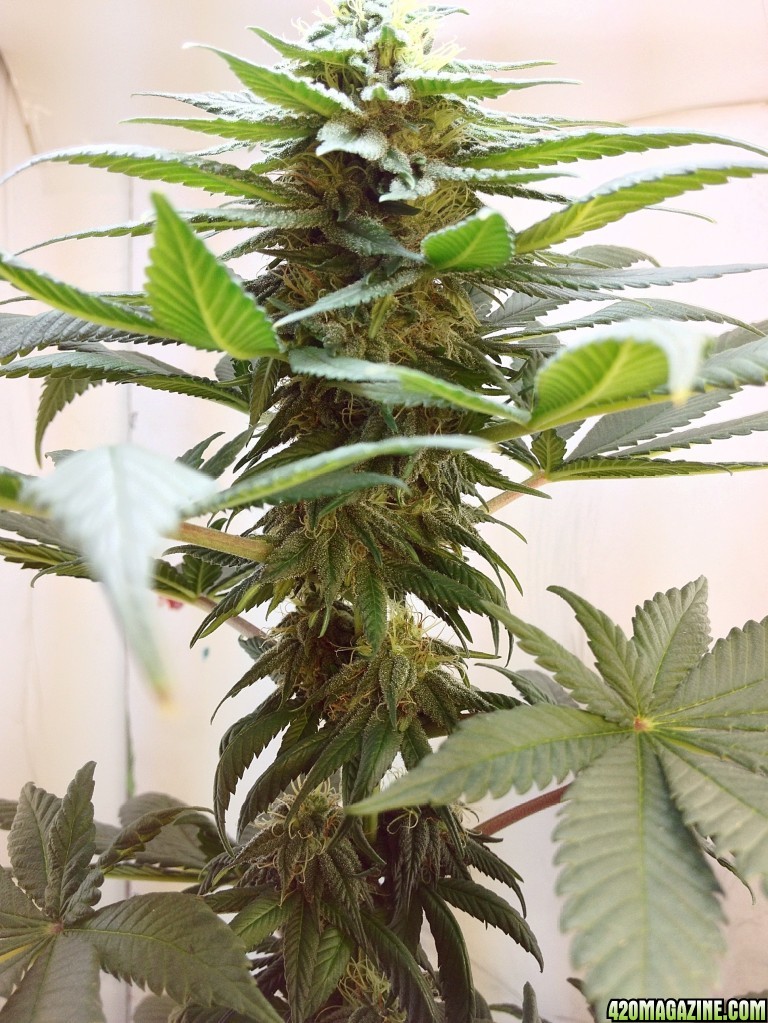 Besides the very low yield due to pot size, watts, and time I started flowering, she's lookin very good! Not bad for a <100 watt super-duper-low-budget grow. 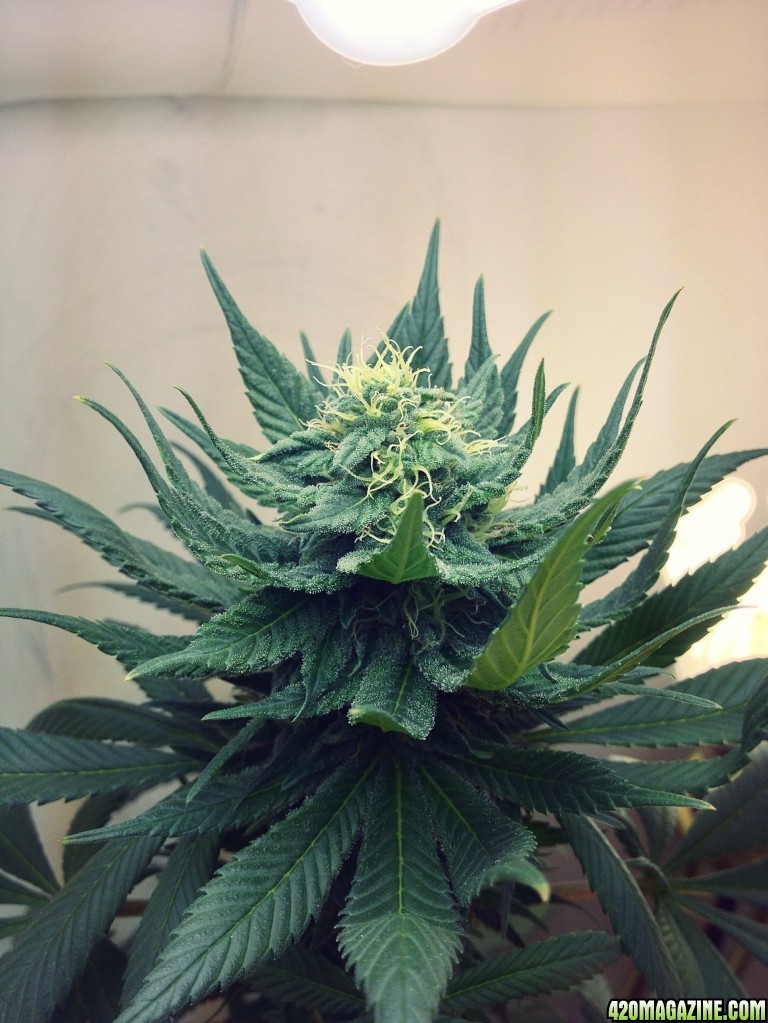 Looks Damn fine to me but I'm a newbie too... I have a journal with mine as well and I also used MG soil.... keep it up looks like a good low budget first run to me and keep the up dates coming I'll be watching I'm on day 9 running cfl and t5 lights so check mine out as well.... you are in kinda the same boat so any of your input in my journal is more than welcome.... keep it up hope you have a good yield