Aloha everybody. I am from San Diego, CA. Not only do I have a recommend, I am taking my first venture into growing....My current set up is EXTREMELY ghetto, and mostly hand made. I'm in about a 28"x36" grow area(half of my sliding closet.) I am using for right now(due to extremely tight monetary restraints) 3 X 120 watt plant grow lights(home depot) in 10" clamp light reflectors all right next to each other pointing down. Currently also using an organic soil mixed with perlite.(50/50)

I am more interested in responses about the plants, being this is my first attempt( and only having had a recommend for 3 months) I am just not sure if they are healthy, the seem to be but there are small things that concern me. Photos will be added very shortly.

I am also planning on building a sort of hydro system...i am pretty handy and and innovative.....ohh and a side note, I was wondering is it possible to have a manual ebb and flow system....basically where i fill up and drain my self through out the day. What I am wondering is how often would it need to be done? every 4 hours? every hour? Also in that type of system what would be the best medium for growing? I was thinking the hydro-clay(i think) since it does expand and hold water nutrients, but I am open to other input, tending time is not really and issue so I am not worried about that.

Anywho any and all input is appreciated. I will have photos up as soon as i get home from work.

Welcome to the best cannabis-awareness site on the Internet!

If you're a total newbie, you might consider going with a simple DWC (Deep Water Culture) setup. Basically, a reservoir with lid with plants' roots growing directly into it with aeration. Very easy (and cheap). Can handle short(+/-) power failures without the plants instantly tanking on you. Allows you to focus more on the plants and how they grow/behave and react to changes and less on your setup.

I'd even suggest that for some, it's better to start with DWC than with soil. While soil(sic) has a buffering affect in that changes you make don't usually show up instantly, I feel that it can be somewhat counterproductive for a person that is just starting and trying to learn about the plants. Sure, if someone lives in a vacuum, knows nothing, and isn't going to learn anything then that person is more likely to harvest something by dropping a plant into soil. But with a resource at your disposal such as 420Magazine.com, you are not in a vacuum. IOW... If you do something bad in a soil setup, you might not see the affects until tomorrow. At that point, you have a problem but what caused it? Something you did this morning? Last night? The other day? If you do something in a DWC setup, you might return a couple hours later and notice Something Is Not Right, lol; you'll probably be far more likely to immediately guess that it was the very last thing that you did that caused it (and you'd probably be correct). At that point, you can log in here and post - or do a quick search - and learn what happened... And quickly correct things. <SHRUGS> Or you could of course just immediately dump your reservoir and refill it.

Bah sorry it took so long to get the photos up! So here they are! 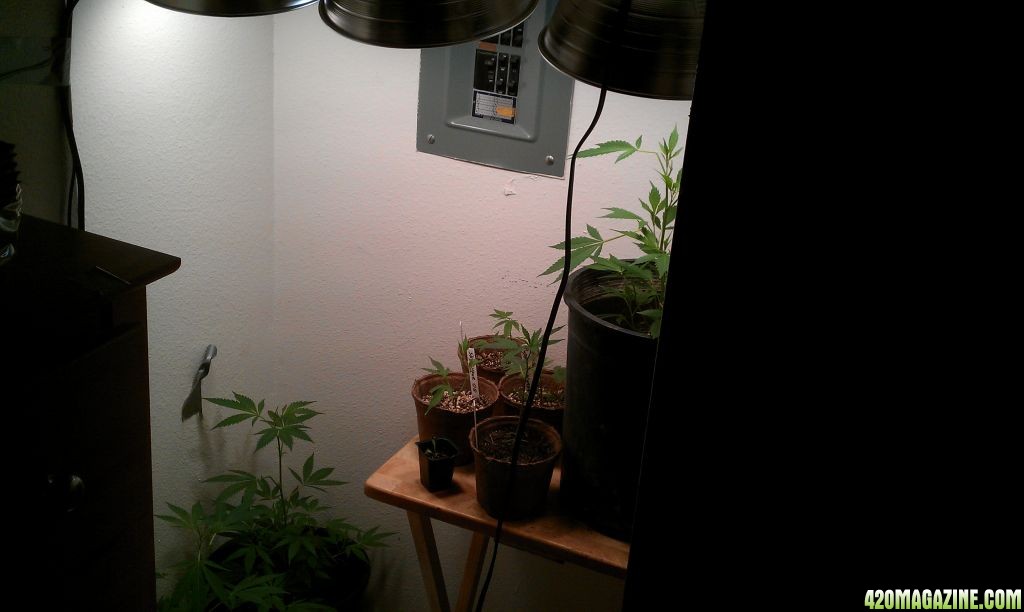 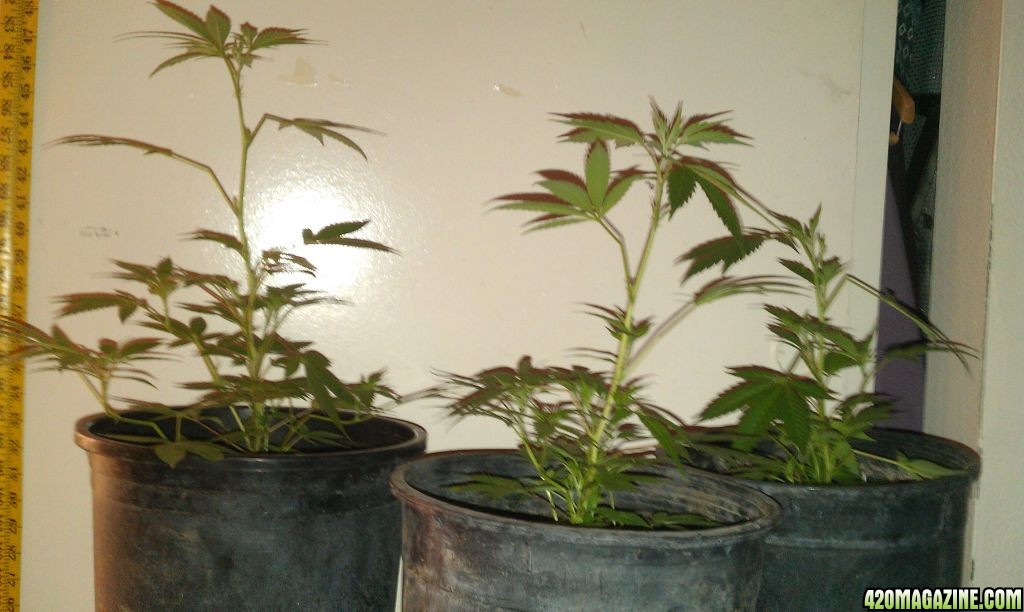 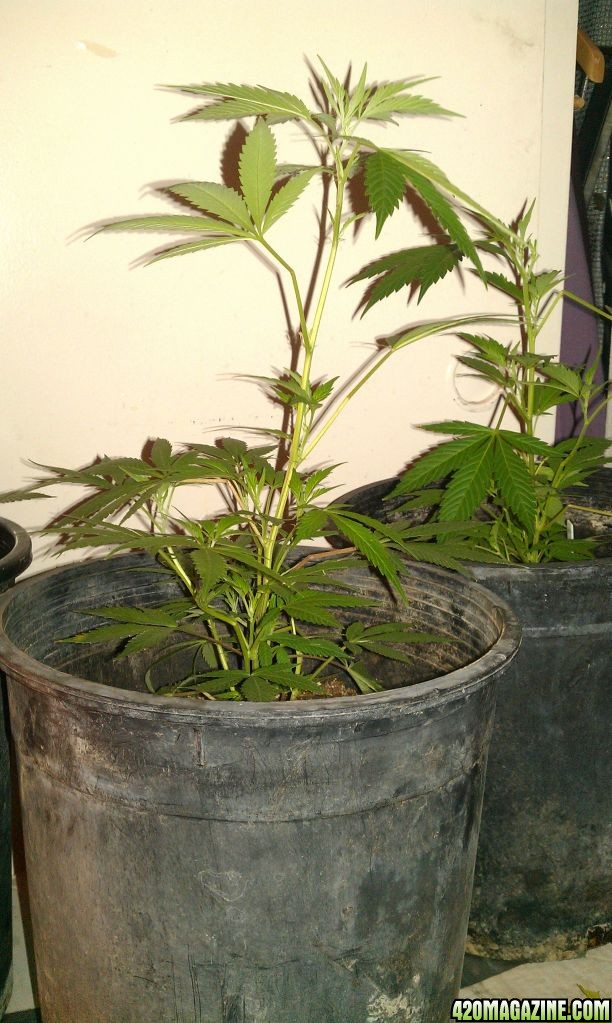 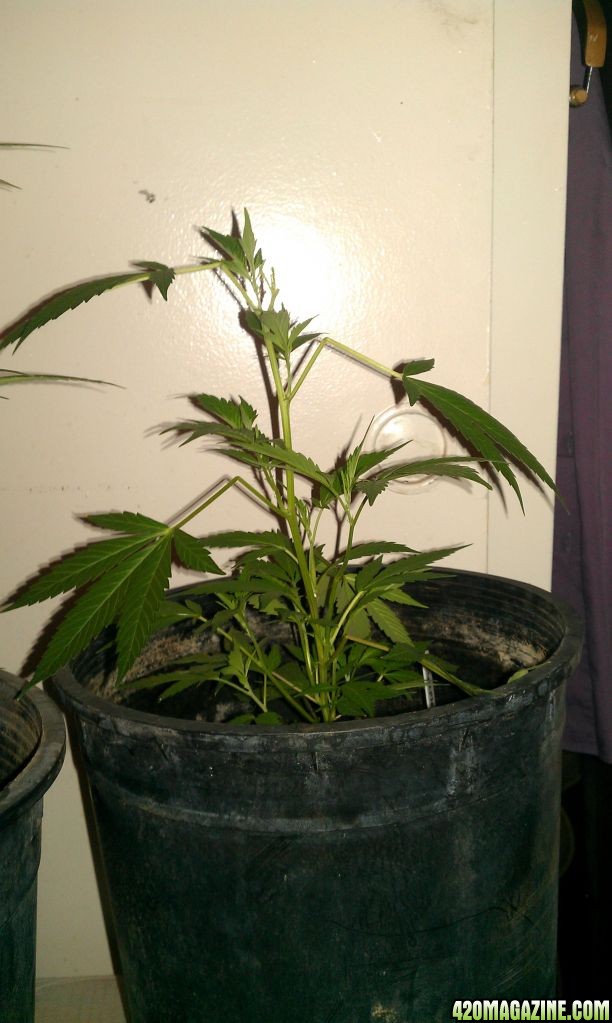 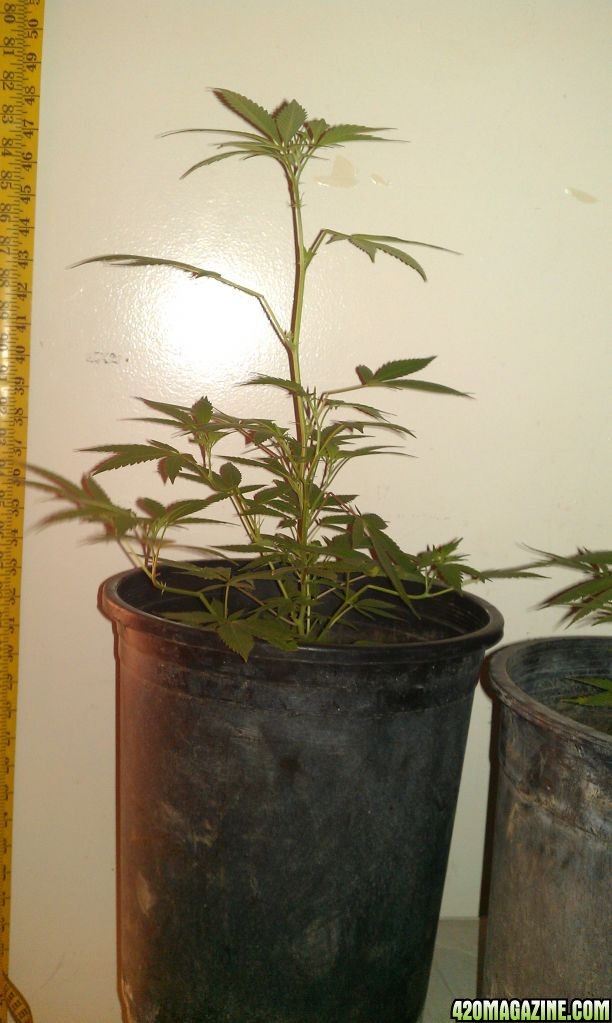 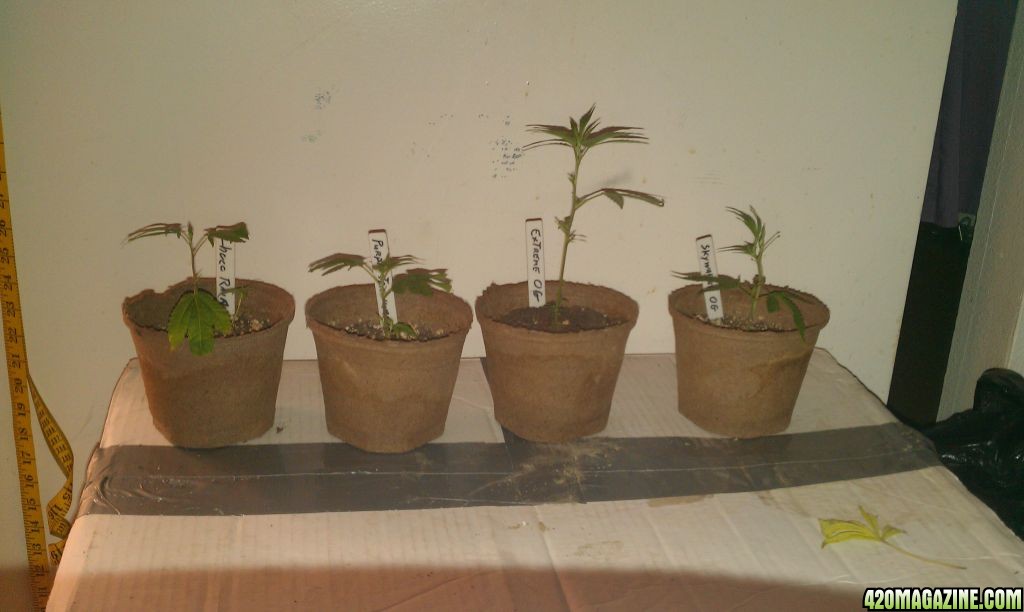 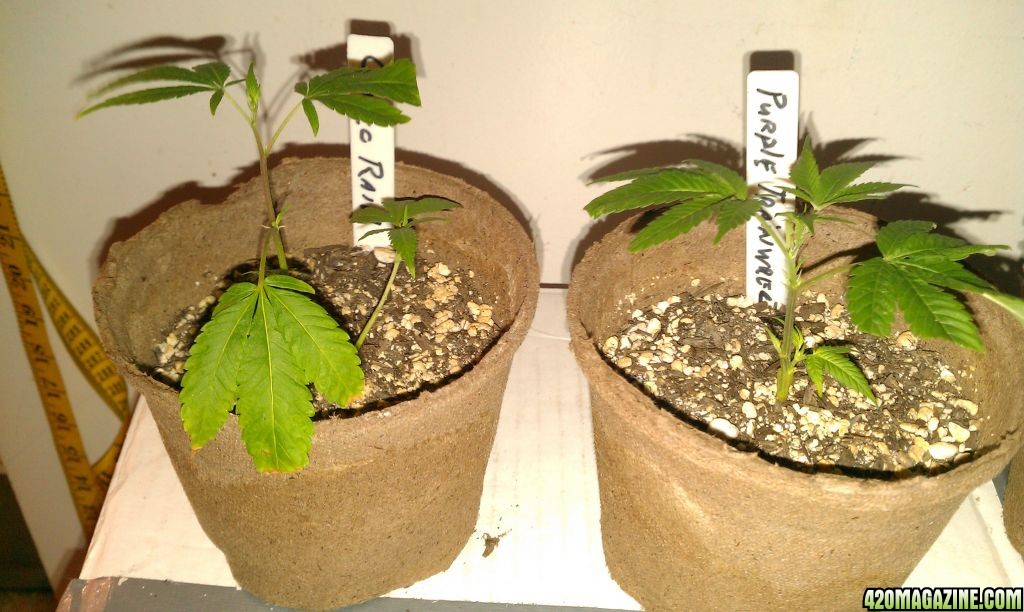 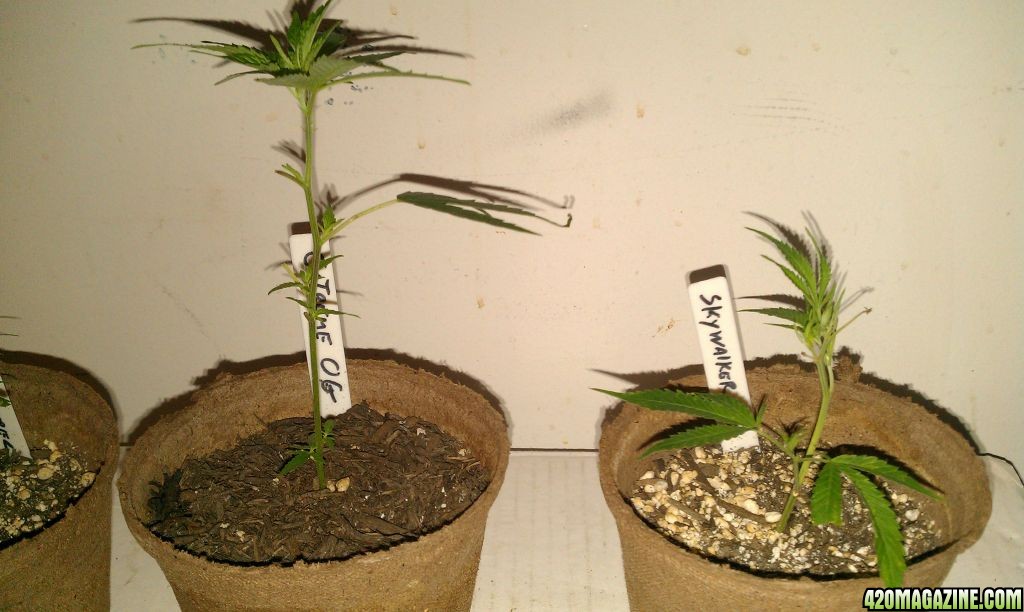 Also just info about the bulbs I am using. Phillips Plant Light(Agro-Lite) 120, using 3 side by side as seen in the first photo. And no I do not plan to keep it that way. since summer is here i am thinking of just letting the big plants sit out side all summer and get nice and big alone. I am basically going to start a perpetual crop. 4 clones starting every 2 weeks.Putting each clone into flowering after 2 weeks with me. And ideally harvest after 8 weeks in flowering.(give or take for tricom ripeness) then every 2 weeks after that harvest.

Again thanks for all the info, I will def check out the DWC set up try it on a a clone or 2. I am really absorbing a lot of info and being as creative as I can.

One thing I wanted to try is i saw that someone set up a Wick Hydro set up using a 2 liter bottle and paper towels, using hydro clay as the medium....anyone know if that is something worth attempting?

Ok now my brain is spinning with so many querys and ponderings i am going to stop for now and go do more re-search...ohh and water the babies! Thanks again everyone.
Last edited: Jun 23, 2011
Fun w/ 2L Hempies!

Ohh and all the branches that look bent/broke was my attempt 2 mornings ago.....whats weird is the branches feel healed but stayed bent, and now the rest of the branches are curving.
Fun w/ 2L Hempies!

Why not fill your pots with soil? Cannabis likes a deep root system (enough so that in large-scale experiments from seed with deep containers vs. shallow containers of the same size, the M:F ratio was adversely affected in the shallow ones, although I do not remember the exact percentages).

Those lights... If they're like the ones that I saw several years ago, then they're incandescent lights with a bluish glass. Which would mean that they take electricity and turn it into heat with a small amount of light on the side. 3x120w equals 360 watts of electricity to run them (unless they've since gone to CFL design in which case they're probably about 30 watts each?). 40 more watts (plus some more for ballast losses) and you'd have a 400-watt HPS.

Most department store "plant lights" are next to useless. They're sold to people that have houseplants in rooms that are generally well-lit by sunlight and whatever tiny amount of usable light they produce is intended to be supplemental in nature. They're also almost universally overpriced. They only really sell then because most houseplants are leafy & have pretty low overall light requirements. One can grow a number of plants inside under these conditions - as long as one doesn't expect useful fruiting. But cannabis is a light-loving plant both in the amount and intensity and most people don't grow it for the leaves but instead for the "fruit" (nice tight groups of flowers(sic)).

If money is a consideration or if you just don't want to spend any more than you have to for a first run, get a 6-pack of 6500K ~23-watt CFLs, a handful of "socket plugs," and cut up an empty six-pack of pop to make passable reflectors. Then hang the lights in a horizontal orientation (IOW, laying on their side) nice and close to the plants. You will have markedly better growth with shorter internodal spacing.

BtW, this advice is not meant to be criticism. Well, it is, lol, but it's meant to be constructive criticism. I just like to see everyone's "first time" be successful on at least a limited scale, regardless of how much - or how little - they decide to spend. Both yield and enjoyment of the growing hobby can be maximized (or at least enhanced) no matter what the budget.

Although the information is somewhat dated (might be from the old OG?) and doesn't include "recent developments" such as LED information, you can find a LOT of useful information linked from this thread:
How to Grow Cannabis - Everything You Need to Know!

Also these two forums in particular are a source for "catch-all" information that can be both indispensable to new growers and still useful for "oldsters":
How to Grow Marijuana - 420 Magazine
Frequently Asked Questions - 420 Magazine
Respectfully,
Tortured Soul

Bigpappa1983 said:
Ohh and all the branches that look bent/broke was my attempt 2 mornings ago.....whats weird is the branches feel healed but stayed bent, and now the rest of the branches are curving.
Click to expand...

Switched a few things up. Returned the plant lights and got 3 300 watt equal cfls

Grow space- half a sliding closet approx 2'x3'
Lights are equally spaced across the 2ft hanger rack in the closet
Approx 1ft above the plants.
Soil is 2/3 organic soil with worm casting, bat poo and other things(nothing I added got it from home depot) says for palms/cactus/citrus plants. otger 1/3 is perlite.
I will get the exact name/nutes in soil as soon as i get home.
I am having issues with white speckeling on a lot of the leaves of my pkww plants.
Now from what research I have.its either bugs or nutes that is the issue(please be nutes).
Otger enviroment factors.
Closet door remains open with a fan blowing in it, about 10 ft away is the patio whichis always open(screen door closed)
My ph is high according to my 3 dollar tester, need to get it down about 1 full point. I was suggested lemon juice?
Any thoughts?
I couldn't see any bugs with plain nught under the leaves and they look good othrwise.
A photo will be up shortly.
Also when transplanting some little guys out of there "plantable" cups(terrible waste imo) I saw what could be small webbing on the edge of the soil after peeling the pot away. Looked more fuzzy than webby(meldew like) thinking.it could just be those pots.
Photo of a leaf coming up soon. Any input would help. Hope I gave sufficent information.

There is one photo i have, can post others this evening. If any specific shots are requested.i can oblige.
Fun w/ 2L Hempies!

E
Do I need to worry about water pH in my soil?