Fla- Bob and Cathy Jordan are used to being on the offense when it comes to the fight for medical marijuana.

But on Wednesday, the couple entered the ring with a defensive purpose: to protect themselves from the law by suing the manatee county sheriffs office.

"We sued the county and the sheriff for our medicine back. Either it's medicine or it's not," says Bob Jordan.

Cathy was diagnosed with amyotrophic lateral sclerosis, or ALS, 29 years ago; years filled with more obstacles than moments of hope.

So when she experienced the healing properties of marijuana during a vacation to the Suncoast in 1989, she knew she found something worth fighting for.

"She said that day on that beach when she smoked that cannabis, her disease stopped," her husband says.

And the couple have been activists ever since, but it hasn't always been a smooth ride.

Two years ago, the marijuana plants that Bob grows at home for medicinal purposes were seized in a raid by the sheriff's office.

Although prosecutors chose not to press charges against him, Bob and his wife filed a lawsuit against the county sheriff's office to protect themselves in the future.

"We need protection right now, so we're going to court for what's called 'conjunctive relief,'" Bob Jordan explains. "In other words, as long as she's alive, and she needs her medicine, just leave us alone."

The Jordans and their lawyers entered a Manatee County court room with the unprecedented request of a circuit court judge to protect Bob and Cathy from any more sheriff's office visits regarding illegal cannabis;
but it was a request Judge Gilbert Smith Jr. did not feel compelled to grant.

"Unfortunately the judge agreed with them, and dismissed the case," says Russell Cormican, one of the couple's attorneys. "We don't agree with that opinion, and are taking the case on appeal."

The couple felt pressure to act following the Florida House decision to leave Tallahassee before the bill pertaining to this issue could be reviewed.

Round 1 of the Jordan's fight has ended in Manatee County, but they hope the next round, which will take place in a district appeals court, brings better news. 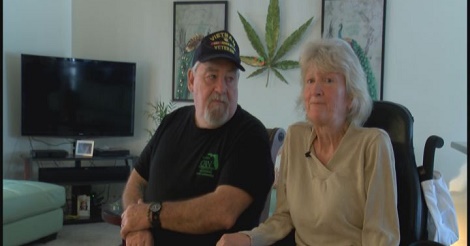