Just as 13-year-old Branden Petro flops into the passenger seat of his mom's car, his eyes roll back. His face twitches uncontrollably. He curls into a fetal position.

It is his third seizure on a particularly bad day. His mother, Renee Petro, 36, jumps from her seat and runs around the car. She pulls the backpack off her son and grabs his hand.

Every seizure terrifies her. Any seizure could cause more brain damage. Any one could be the first sign his condition is getting worse. Other children with his condition have taken a turn for the worse and been dead within a year.

She knows many people think marijuana should remain illegal. She recognizes law-enforcement fears that legalization could make marijuana easier for recreational users and addicts. She's heard how pill-mill doctors would line up to dispense pot. She respects that it is illegal in Florida, and she does not want to break the law.

"I have said it a thousand times. I will not bury my son. But I should not, not for a split second, have to think about doing something illegal to be a good mother. We live in the United States of America," she said.

During summer vacation in 2011, Branden had what seemed like a routine fever. A few days later, he had a seizure and ended up in the emergency room. He fell into a coma. The seizures have not stopped since.

Eventually, he was diagnosed with febrile infection-related epilepsy syndrome. The condition is a medical mystery and it is treated with high-dose drugs, including antipsychotics.

A balancing act began. The drugs helped control seizures, but if he took too many, he became extremely lethargic. If he took too few, or the wrong mix, the seizures were not controlled

For his parents – dad is an active duty, deployed Army colonel, Renee occasionally works part time – the drugs have become as dangerous as the seizures they try to control.

"It isn't the disease that is taking Branden away from me. It's the medications that are taking him," Renee said. "And how many times have we had to watch him be suicidal or the times he saw things that aren't there?"

Renee heard about children with epilepsy who did better with medical marijuana than they did on pharmaceuticals. So, last October they flew to California, where medical marijuana is legal. Brandon began treatment under a doctor's supervision and they began to wean him from his other drugs. Renee said he went seizure-free for the three-week trial. She said his mood seemed to improve.

"Stories of epileptic children responding to medical marijuana are legitimate," said Dr. Selim Benbadis, director of the Comprehensive Epilepsy Program at University of South Florida and Tampa General Hospital. "If it was available, I would prescribe it next week."

But Benbadis is cautious. "There is very strong anecdotal evidence, but we need clinical trials. There are also people who do not respond, but you don't hear about any of them in news stories."

"Do I think it's going to be miraculous?" Renee said. "No. Nothing is perfect. To be honest with you I don't want perfect. Perfect is overrated. All I want is for him to have a chance to live a life, be happy. Maybe fall in love."

By the end of this year, she plans to move herself, Branden and his 10-year-old sister to California so he can get the treatment she feels he needs. She believes she can't afford to wait.

On a recent night, Branden paced the family living room punching the air. He has a teenager's energy, but has been left mentally disabled by all the seizures. Renee says prescription drugs make him irritable and make his behavior unpredictable. He jumps on Renee, who is sitting on the couch. At first, she doesn't know whether he is being playful or having the kind of outburst that leaves bruises.

"No. Gentle. Remember you have to be gentle."

He wraps her up, pushes her back into the couch and forcefully covers her mouth.

He giggles, jumps up and runs away.

She is relieved, but worried. Branden sometimes gets the giggles when a seizure is coming on.

Renee worries her son is getting worse. She blames Florida lawmakers and excessive bureaucracy for her situation.

"I am disgusted at Florida. None of the politicians care about us. They don't know how it is. They don't live it every day. Sleep next to my son and watch him seize. Then you tell me if you would do something illegally." 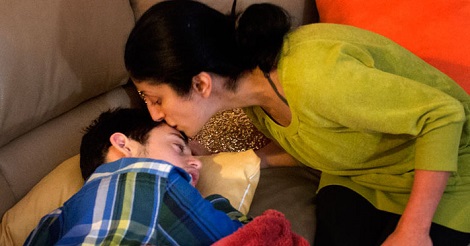