Lisa Miller believes pot may be the cure for the tremors that regularly overtake her dog Dinah.

After years of legislative wrangling and bureaucratic delays, ailing Floridians might finally have access to medical marijuana by next summer. Now a paragraph in Sen. Jeff Brandes' bill is giving pet owners like Miller hope their animals could also benefit from the drug's medicinal effects.

SB 852 constructs the framework for human patient access to medical marijuana to treat people with seizures, cancer, HIV/AIDS or other chronic ailments, but it also opens the kennel to researching marijuana's effect on animals with seizures.

The bill sponsored by the St. Peterburg Republican would authorize the University of Florida to work with a veterinary research organization to explore using the same low-THC extracts the Legislature approved for humans in 2013 in treating animals. However, the legislation prohibits the use of state funds to conduct the research.

If the bill makes its way through the Legislature, it would be the first in the country to open the door to research of pot for animals.

THC is the main chemical in marijuana that produces the high associated with its use.

Miller, who is a registered lobbyist, political consultant and CEO of Lisa Miller and Associates, said she'd never seen a dog go endure seizures until her pup had one in January 2014.

"She was slamming her body on the floor, writhing up and down," Miller said. "You're helpless and they're helpless. It's the ultimate helplessness."

'You do anything you can for your pet'

Dinah goes through cluster seizures about once a month. The only thing that has provided any relief has been veterinary prescribed medications given during the onset. A daily regimen of medical marijuana may keep the seizures at bay, Miller believes.

"Just like all of us who know that low-THC cannabis will be tremendous help to humans with seizures," Miller said, "it makes sense that it will have the same effect on those precious friends that we call pets who suffer from these same symptoms."

Miller said she approached lawmakers with the idea during last year's legislative session, when they and the Department of Health were struggling with how best to implement a system for providing the low-THC medicine to people. But pet concerns were set aside in the Legislature.

For those whose pets suffer with epilepsy, however, it's a pressing issue. Freddy, Cecilia Rush's 11-year-old English springer spaniel, suffers from seizures that are less pronounced than Dinah's.

Rush, of Tallahassee, said Freddy has had minor seizures since he was about 6. She can always tell when they're coming on.

Freddy comes, curls up in Rush's lap and growls quietly.

She gives him the anti-seizure drug Zonisamide twice a day.

Pets, like Freddy, often are prescribed the same medications as humans for the same ailments. They also suffer the same side effects, which is why Freddy has to get his liver checked regularly to ensure the drug is working properly.

Rush, a retired state employee, is curious about whether the medical marijuana approach would provide relief for her dog. But only if it's legal.

"Maybe it would help and maybe he wouldn't have to take these medications that can damage his liver," Rush said. "I just want him comfortable and I don't want him having seizures. I know how hard it is on his system and his brain. You do anything you can for your pet."

There's no harm in giving pets and their owners a chance at exploring the option of marijuana, Brandes said. It would be a shame to stifle potential research.

"We don't want to prohibit the researching of this on animals," the Republican lawmaker said. "So, if we're going to allow research on humans, we should allow it on animals."

And just as marijuana and its oils are being used by humans to ward off pain either through illness or in old age, pets could benefit too, Brandes said.

"For dogs suffering at the end of their lives ... it may be a rational use," he said.

The American Veterinary Medical Association hasn't put its stamp of approval on marijuana for pets, but sees the value in conducting the research.

Just as in Brandes' bill, the AVMA's official position is that the idea needs to be researched more thoroughly.

The federal restrictions on the drug, even in places where marijuana has been OK'd, present another challenge for vets who are bound by national laws when distributing prescription medications.

Marijuana is still classified as a Schedule 1 narcotic by the federal government, which means vets may not legally prescribe it.

"There is a need for increased research into marijuana so that it can be evaluated and a more therapeutic dose and toxic doses can be identified," said Assistant Director in the AVMA's Division of Animal and Public Health Lynne White-Shim. "Certainly, vets are educated to evaluate the benefits and risks of plans they prepare for their patients. They must continue to use their sound clinical judgement when preparing those plans."

Through its annual journal, the AVMA has published a series of articles regarding marijuana use by pets. It welcomes the research into its effects but remains cautious of federal law. One article profiles pet owners who aren't waiting on the science and giving their pets pot with mixed results.

Miller acknowledged that the results may not be immediately available to Dinah or Freddy, but continuing research into using marijuana to treat ailing pets is important.

"It may take us five years, 10 years and my dog my may be dead and gone," Miller said, "but I want to make sure the search is kept top of mind." 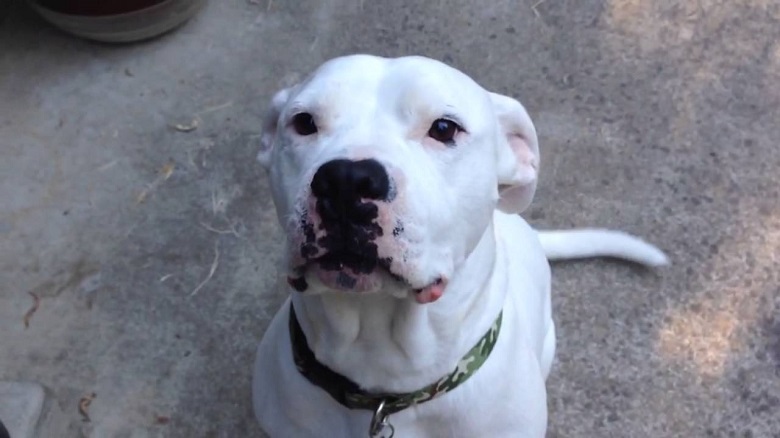 I had two dogs myself a few years ago and both of them suffered from seizures until I started trying out different foods for them and realized that it was the gluten found in allot of the dog food I was feeding them that was causing their seizures and once I switched over to Iams, which is gluten free, my mid size bulldog lab mix almost quit having seizures entirely and my Jack Russel, who had them way more frequently was only having seizures about a quarter as much as he was before I switched their food. That tells me that the gluten was the main cause of their seizures and not just a medical condition. My Jack Russel "Harley" was having about 10 to 15 seizures a day and when I switched their food he was only having about 1 to 2 per day and sometimes would go a couple of days without having any seizures.

I'm not saying that people can't use Cannabis to help their animals, due to the non toxic nature of it, but they should also look into the diet their animals are given as well.

I can totally relate to this story because it's really sad to watch a sweet little animal that you care about suffering like that and the sheer feeling of helplessness in not knowing how to help them.

TBH, I'm proud of my self for seeking out and finding something that seemed to work to help them and I'm also proud to say that they both finally passed away from old age and not because I didn't take the best care of them I possibly could. For the record, it was me who figured out it was the food and not their vet, who didn't seem to have a clue to what was causing their seizures.

Experts Say Medical Marijuana Could Be Good For Pets