i decided to start my grow journal one day into 12/12.

Plants look very healthy....i had 4 plants pre flower before i switched to my 400 watt HPS conversion..

This might sound stupid but does pre flowering white hairs, guarentee they are female? 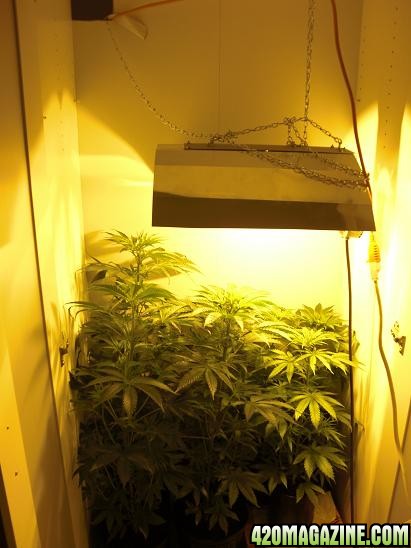 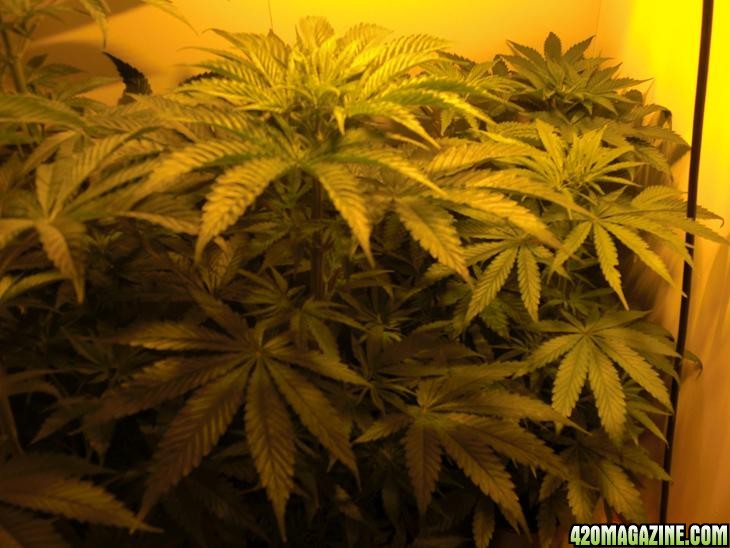 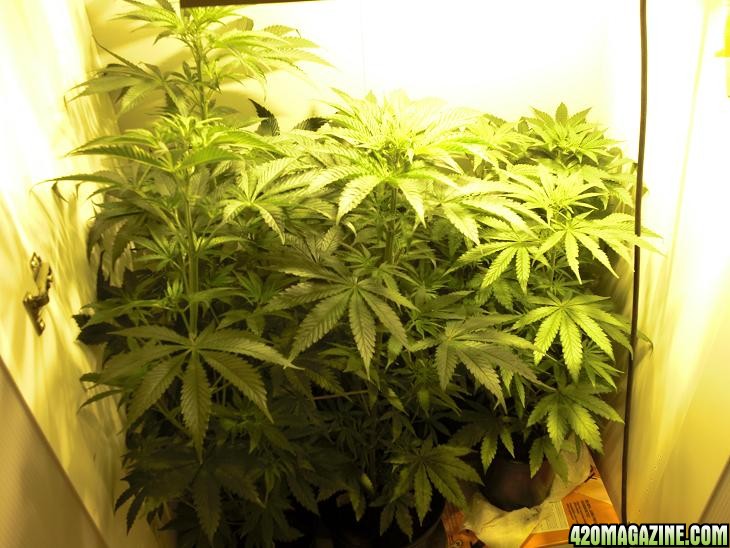 In the above pic you can see the difference in pot size from the ones ont he right...they are way smaller and i feel they are not growing to their full potential because of it. So i need to transplant as fast as i Can...which is why i am looking for the earliest signs of male. 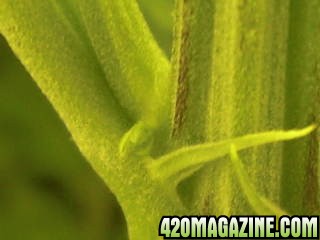 this is the one that it think is male...if you guys need more pics to tell..ill get some..whaat you think is it safe to take it out??

one last question...in time of transplant does the plant have to be totally dry, or is it ok if it is moist?

_Pimpin
Last edited by a moderator: Sep 8, 2008
Smoking is a habit, and Habits must be upheld.
F

Not always But Most of the time!

plants that show pre-flowers can hermie too, if not all out male.
More likely to hermie than be just male.

depends on what comes out of those bumps next to the spurs
Ref. pic, new_camera-3_037
420 Magazine
Creating Cannabis Awareness Since 1993
How to Grow Cannabis
Please Visit Our Sponsors
P

two things, "if there is a good chance that one will be male", and i have 3 others that i am not sure at all about, but are being held from their potential would you sacarafice that other on Ref> new camera-3_37? So i can transplant the other one in bigger pots and start my SCROG as soon as possible, because i have no room on top either?

bassically sacrafice that one i think is male, EVEN THO IT MIGHT NOT BE, for the best interests of the batch?

and can i transplant when the soil is moist, like will they be over wattered?

-PIMPIN
Smoking is a habit, and Habits must be upheld.

cant really tell to well from the pic but to me it does look like nuts. if it looks like mini bannabas kick him to the curb
:MoreNutes:Purp Haze, Ak 12/12 No Mercy- Current Grow(Harvest time has begun)

"Why use up the forests which were centuries in the making and the mines which required ages to lay down, if we can get the equivalent of forest and mineral products in the annual growth of the hemp fields?"
- Henry Ford -
P 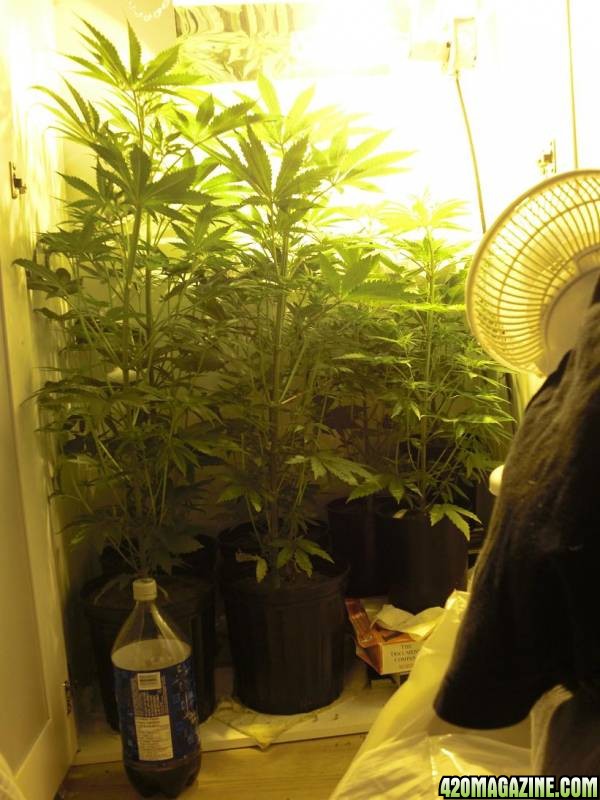 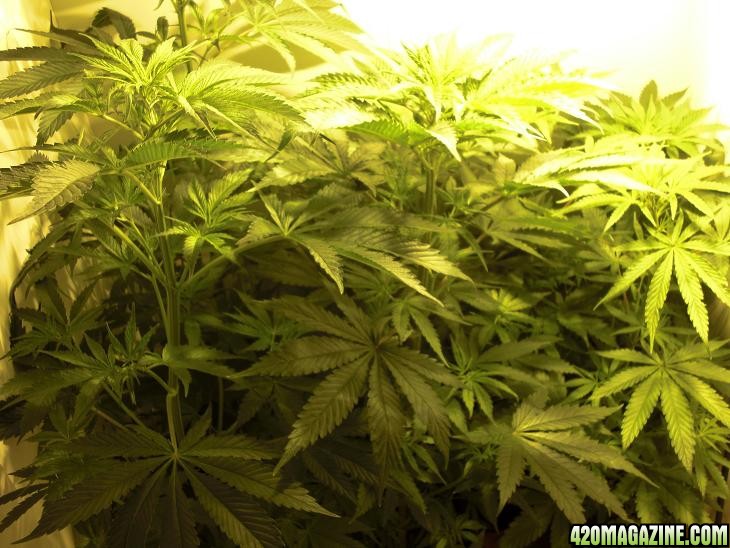 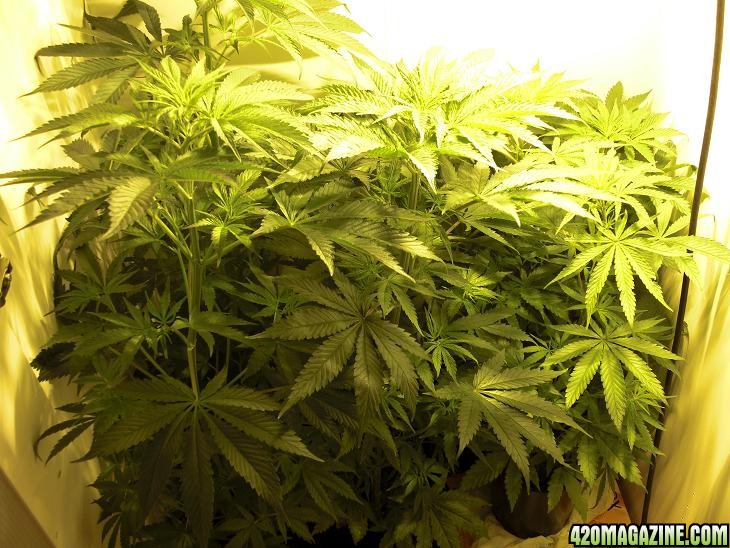 Last edited by a moderator: Sep 8, 2008
Smoking is a habit, and Habits must be upheld.
F

Tough call,
I'd wait a bit to make sure(it's a male).
420 Magazine
Creating Cannabis Awareness Since 1993
How to Grow Cannabis
Please Visit Our Sponsors
P

well I have 6 plants in the cab now five ofwhich are showing signs of female sex and I'm waiting on the last one. I know its kind of late with size my plants have become but I do want to attempt some sort of SCROG. I am going to wait for the sex of the last one.

Question, can I cut most of the fan leaves off with this method? And if so what's the best way to do so, pulling downward? Or cutting?

Any help would be appreciated

-thanks
-pimpin
Smoking is a habit, and Habits must be upheld.
F

It's easier to SCROG with clones(all the same size).
Not sure about cuttin' leafs,
I run a perpetual SOG

Sorry for the delay guys, it has been my birthday week, and i have been attending to other "females".......

well the last i pics i see are from pre- NEtting, well i pulled of some sort of netting action, and i mean its not the best done, because of the fact of how big they actually were. I acomplished what i wanted and that was to restrict the plants tot he hieght i had to work with......

These pics following are probably 3 or 4 days after the last ones, and i will follow later in the reply with where we are today. 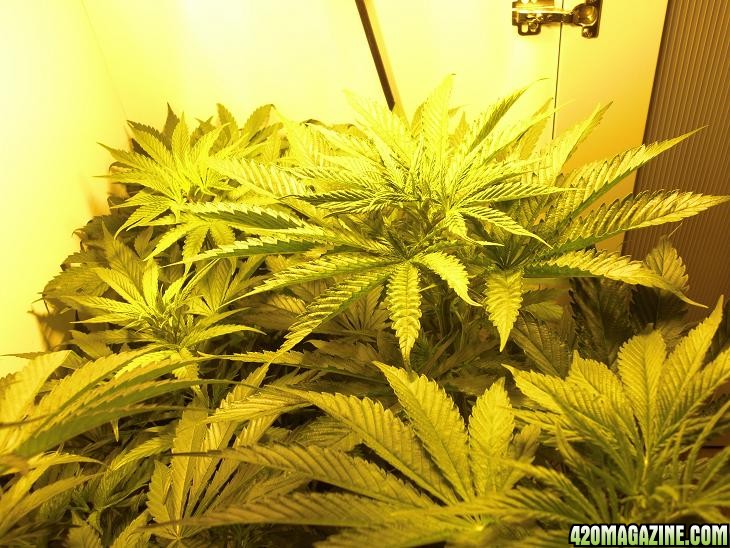 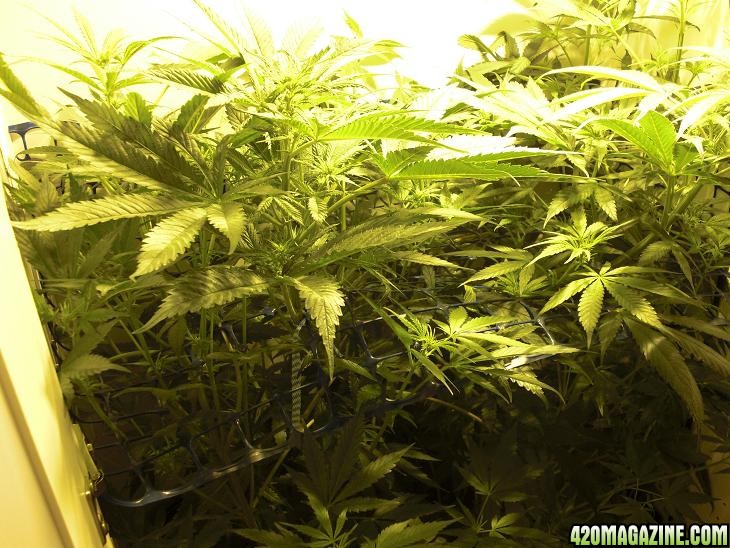 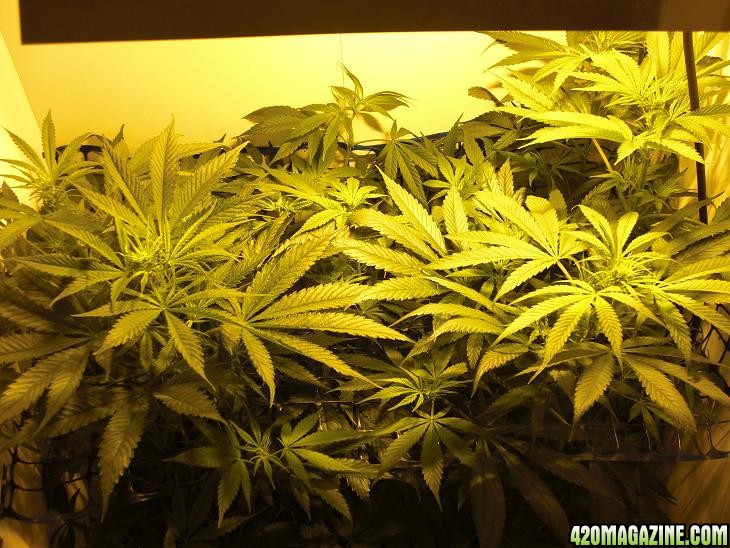 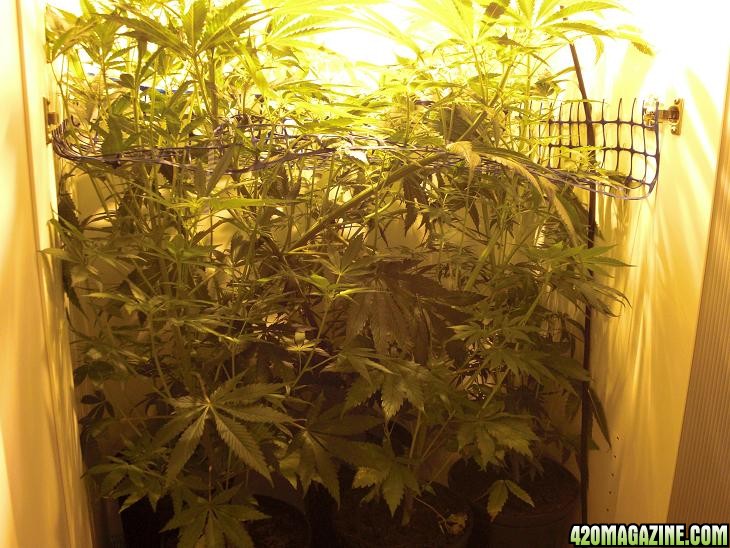 as you see ^^^its not the most proffesional job, but it did its job, you will see in the recent pics that i actually had to tie them down to the net because they were touching the 400 watt lamp 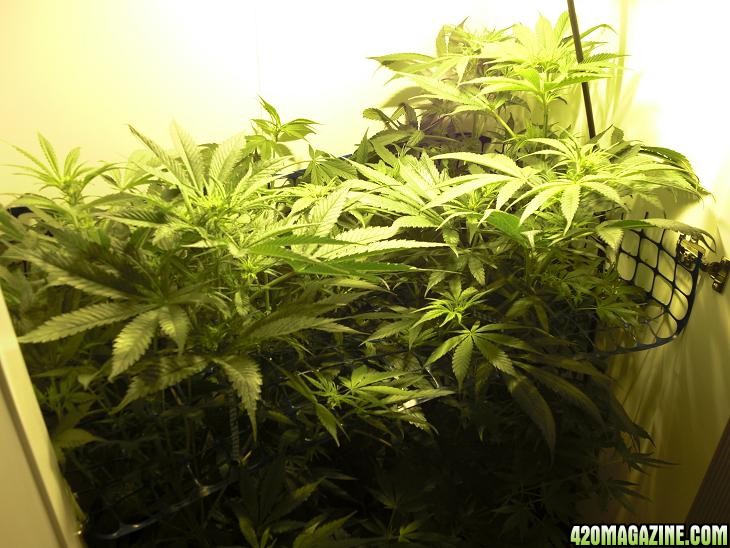 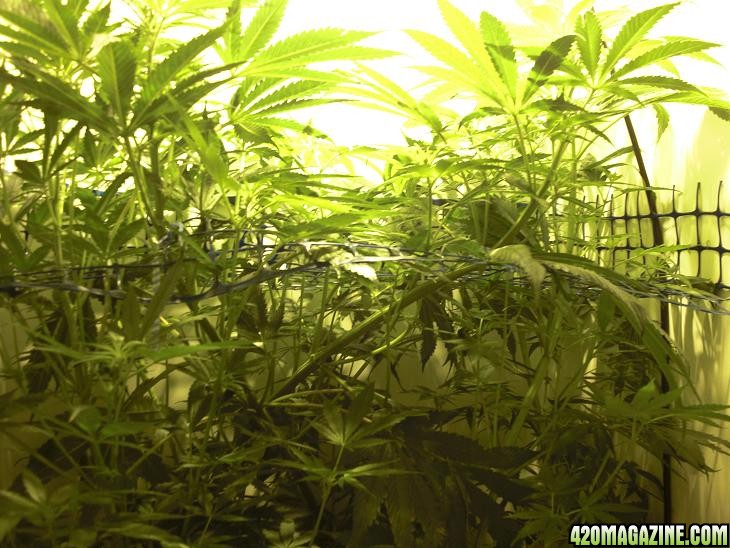 you can get an idea^^^of how they just wont stop growing....


Now this is presnt time and i have added from my old grow a home depot 150 watt HPS just for the fck of it...hopefully it will make a diference 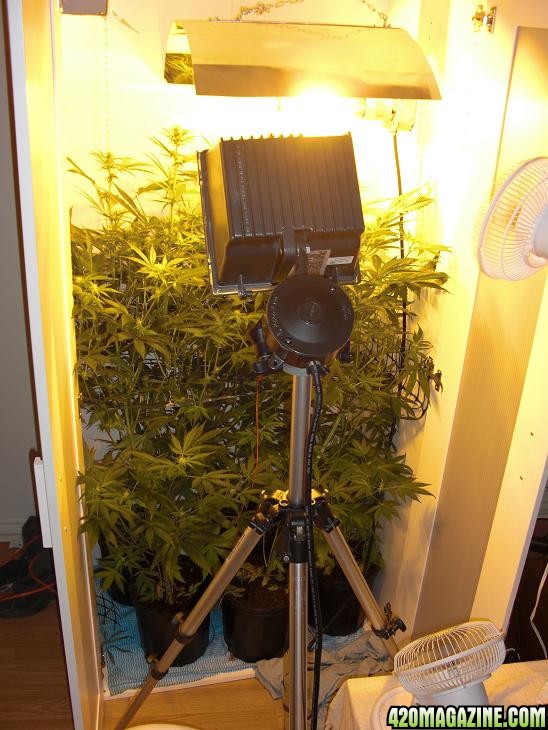 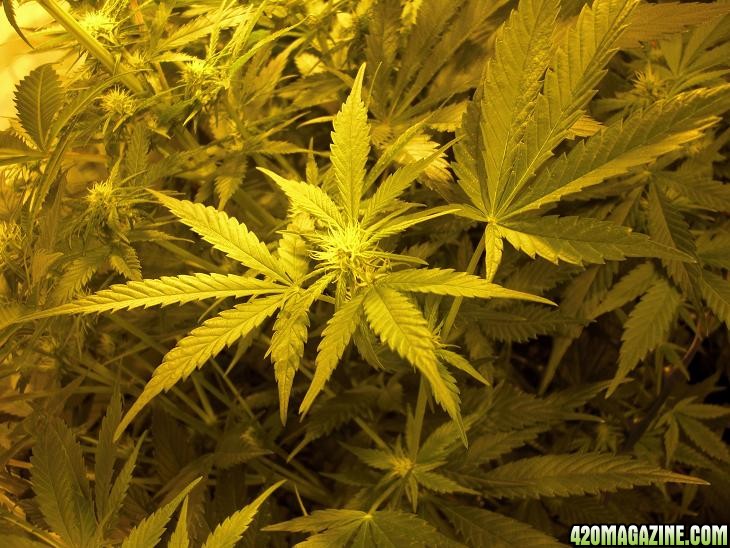 one of the many tops i have aquired^^^^^ 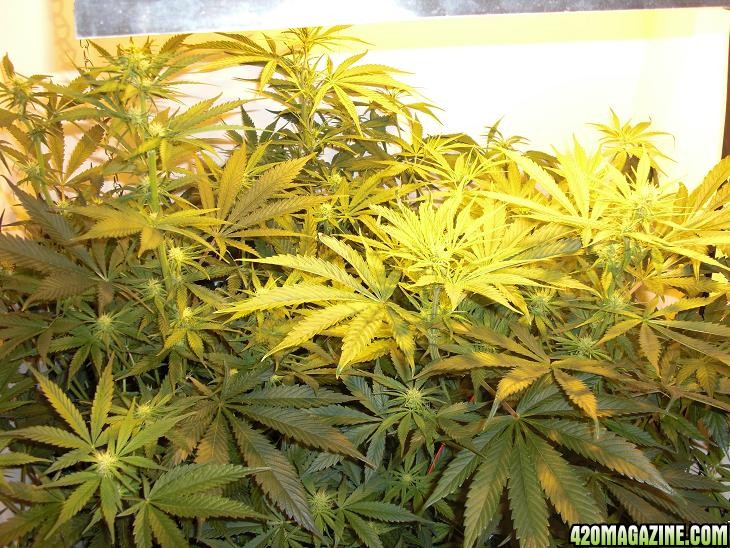 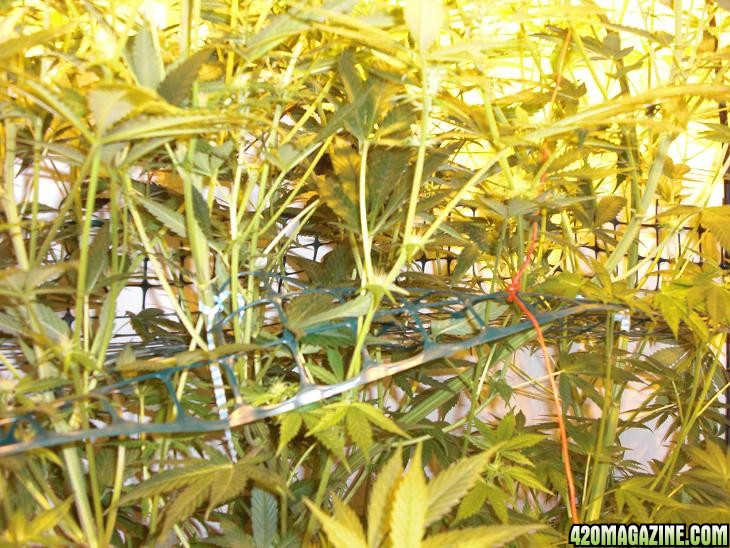 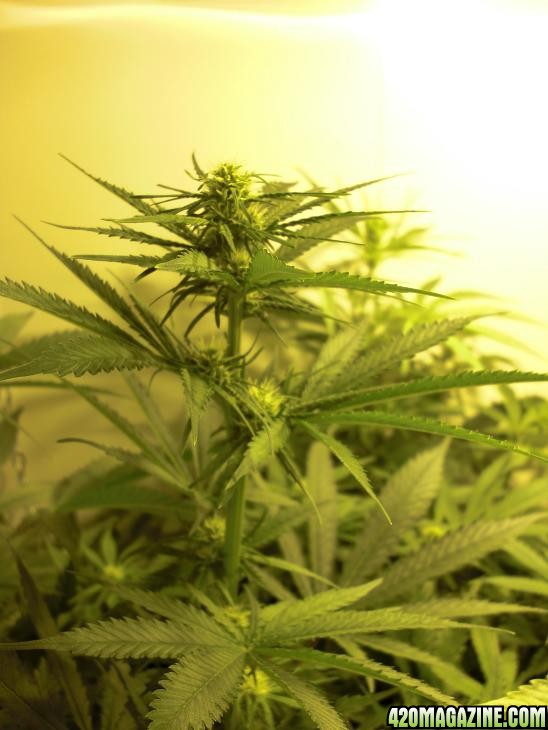 its been about 2 weeks since i went into flowering do you guys think that this slow or on track progress from the development you see? this is worrying me for some reason.... 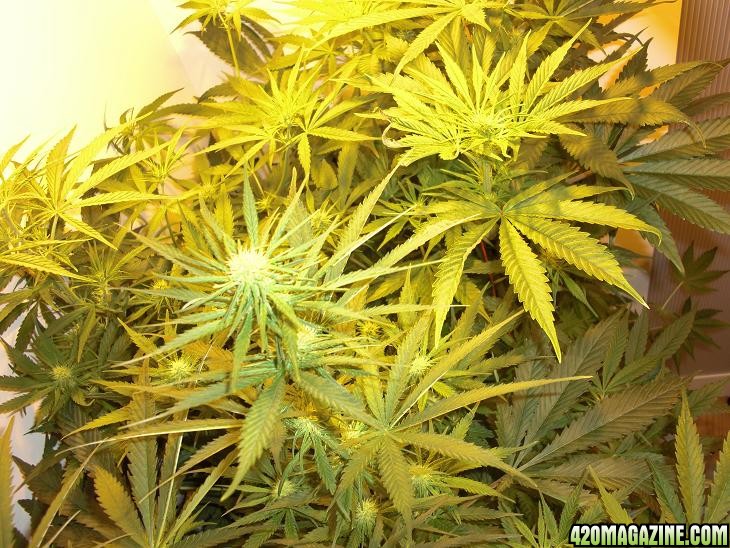 well any input or adivice or conformation would be great...again apologises for the delay on the progress of the journal.

P.S i wanted to say thanks to Herb Fellow for his ratting on one of my pics, i just firgured out that there is a message area. hahaha..stoner i am
Last edited by a moderator: Sep 8, 2008
Smoking is a habit, and Habits must be upheld.
P

thanks dude, i guess its been a while since my last grow, and my patience is growing thin......haha i just want to SMOKE it!
Smoking is a habit, and Habits must be upheld.
P

yeah man i understand what your saying......i dont even think i should use the word scrog after seeing that......lol

and yeah a lot of homework, my first couple grows were cool but my light was just too week......

the reason why im scared they wont nug up is because some of the colas have a lot of space between nodes.....what do you think, i dont want to end up with patches of bud.....what can i do? if anything....or do you think it will turn out ok?
Smoking is a habit, and Habits must be upheld.
B

Not a lot you can do now, but maybe introduce some MH or blue CFL's to try and tighten it up, but they have done most of their stretching already.
420 Magazine®
Creating Cannabis Awareness Since 1993

knocks your socks off and grows great after you've harvested and tested them out.
Click to expand...


I may have to convert

or would that be an upgrade SOG to SCROG?
420 Magazine
Creating Cannabis Awareness Since 1993
How to Grow Cannabis
Please Visit Our Sponsors
P

Well heres an update, things are progressing quite well. I am having a huge problem with hieght i am trying to tie as many as i can down but its blocking light from others. The colas are going to get wider and youll see how close they are to the light. Im kind of tripping, one of the plants is higher than the light, and i can tell a huge difference in progression of that plant...not as good as the others.

I guess my only option is to tie them all down, one of them is burnt at the top, i really dont know what else i can do, i guess i made a amateur mistake by taking them into flowering way to late...... 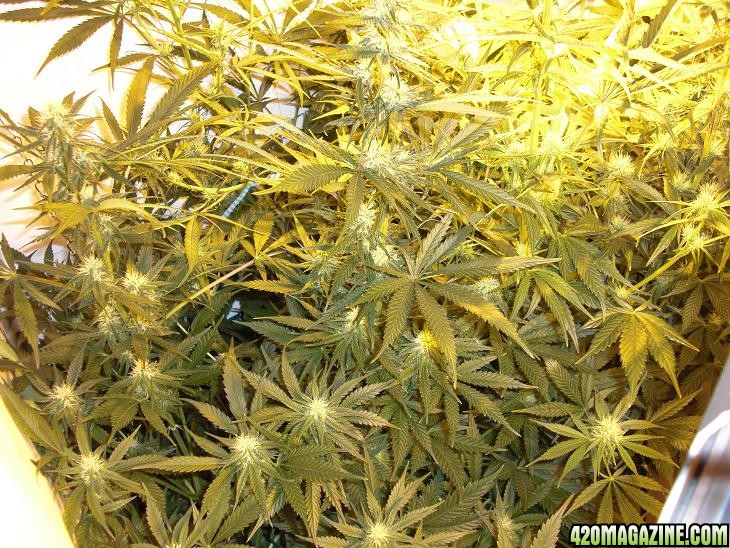 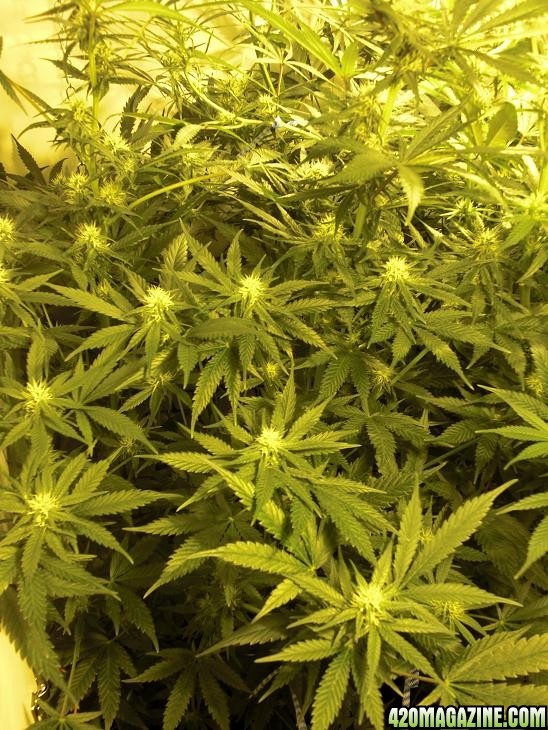 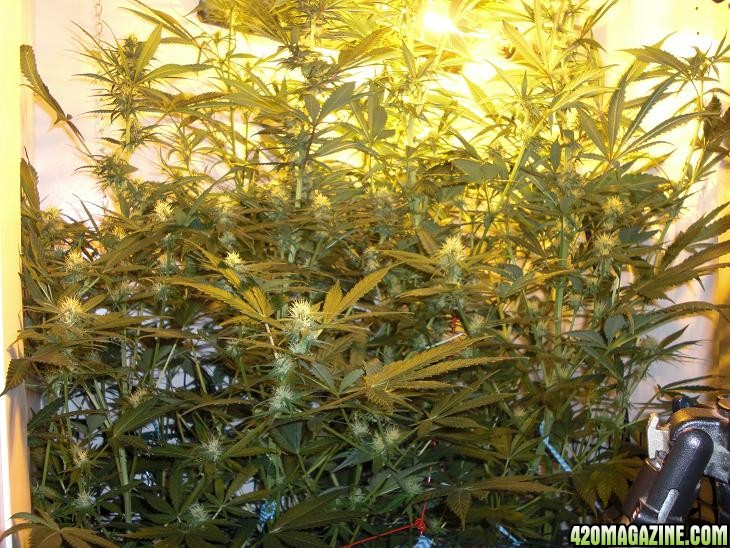 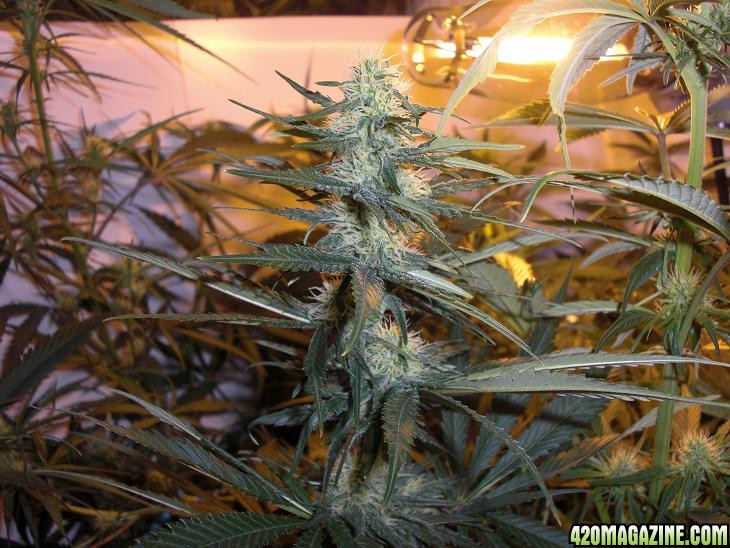 look at this back plant in the bottom pic...i think its topped off but i have to tie it down so i can get some better growth out of it 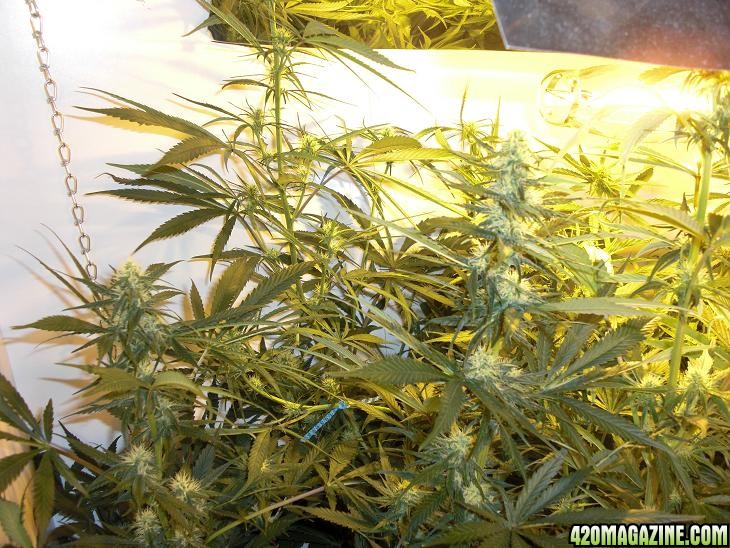 same plant, its touching the reflector...hahaha i am screwed...any help will be appreciated 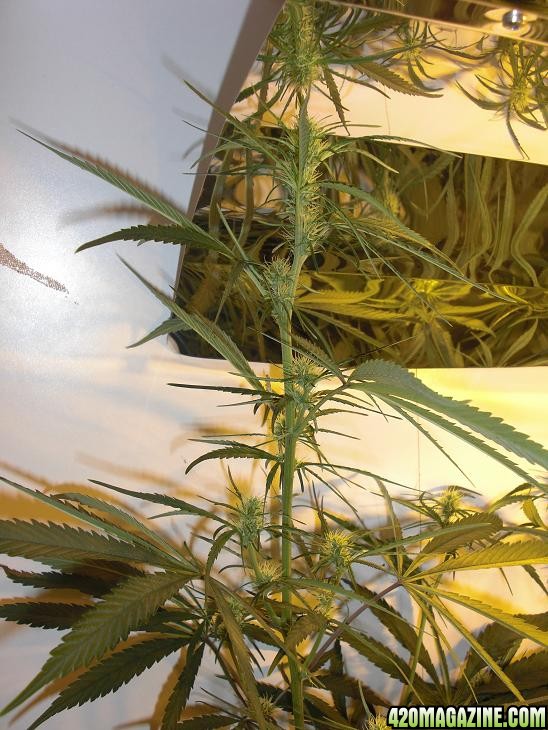 these are the tops directly under the light i have tied down a couple but i guess i have to do a lot more, the problem is that the distance is a lot from the net???? 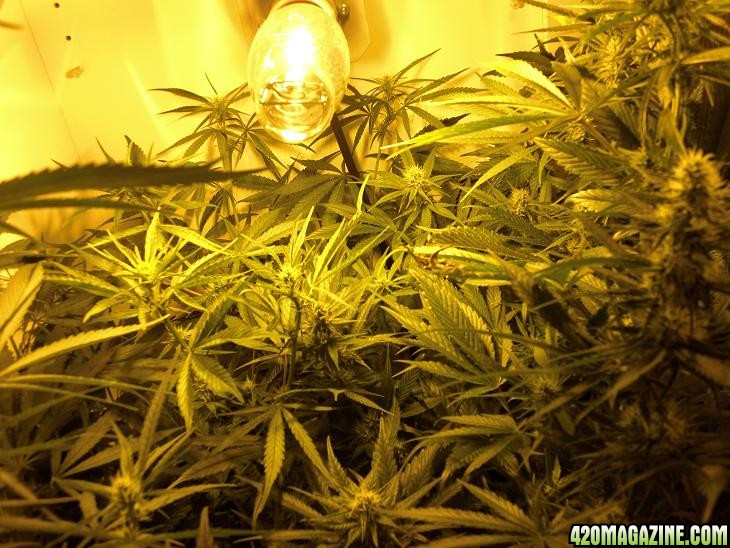 hopefully i wont lose on yeild, any suggestions?

also i am findind that some fan leaves and tops at the bottom of some of the plants...that get no light at all....get week and pretty much fall off almost is that strange?

-pimpin
Smoking is a habit, and Habits must be upheld.
B

I would just get string and tie it all over. Just bend it. Looking really good man!
420 Magazine®
Creating Cannabis Awareness Since 1993

thanks boss, yeah i started today on the tie downs, its a little harder than expected, to get maximum light on every piece of green.

i have another question, from the pics you see and number of plants being 5, knowing that some plants are not doing as well as others, what do you assume that my yeild will be, i have never grown these many, at this scale?
Smoking is a habit, and Habits must be upheld.

ok cool man thanks for the info, so your saying cleanliness has an effect on yeild? Like i wont see any signs of unhealthiness it just wont yeild as much?

another thing every once in a while i see some wattery substance on some leaves, what is that, i do not foilar and its been like 2 days since wattering? i smelled it and it smells really good
Smoking is a habit, and Habits must be upheld.

Cleanliness is just one more thing to pay attention to, for instance, dust on the leaves and on the mylar. I foliar spray my plants throughout the whole veg period and the mylar looks pretty nasty and that cant be good for reflection. I would venture to say cleanliness does play a role in yield, I try to avoid any possible contamination. With alot of air circulation you are going to have shit get in the room especially with the door open. So wipe those leaves and walls down and be sure to clean the pots after each grow with bleach and compared to a person who does none of the above you will see the difference! Oh and as far as the wattery substance you got me, the only thing that looks wet on plants is the resin.
----------------------------------------------------------------
I keep it simple, Toke On!:rasta:
S

Damn Gina! You could fall in love with an orangutan in there! Good job on the healthy looking plants.