Was doing some reading on effects of fluoride on cannabis...

"Some growers believe if you let water sit out for a day or two that it will evaporate the chlorine and chloramine away. This is only half true. Chlorine evaporates easily; chloramine doesn’t. And you will also find that water suppliers are adding fluoride, another potentially toxic element."

Your cheating on 420 with another magazine huh? LMAO

Seriously though, interesting info. Thanks for sharing.
"Governments are not competent and do not have the moral authority to ban something, based either on disapproval or a desire to protect people from their own choices. It is high time we stopped interfering with adult choices. Government opinions are only relevant to those who are incapable of deciding things for themselves.â€

know what you mean buddy, I have problems with the tap water in my area so even if sat out could still be potentially poisonous to your plants. I notice that a lot of the bottled / mineral water is full of the nutrients listed above. a lot of guys on here use distilled water, but aint really available where im from (uk) . so the question is what do you do? just make sure bottled water is phd properly? any thoughts chiefs?

Your cheating on 420 with another magazine huh? LMAO

Seriously though, interesting info. Thanks for sharing.
Click to expand...

I didn't mean to...just couldn't find any info here on it.

I'm using tap water that's been filtered with regular and fluoride filters. no problems so far.
"Vegetable rights and

cheers for your reply duckula not been on in a while been waiting on my new arrivals, in the end went with a big bottle of spring water and ph test with up and down. just started 10 x WW x BB seeds there in some root riots and a propagator. well recommended on here and I have to say they are top notch ( all 10 germed up through cubes and showing leaves within 3 days

does anyone know when to pot up?? mine are showing roots out the bottom allready
SKUNKYFLAVOURS FIRST GROW 10 X White Widow X Big Bud Feminized , 600w hps

count duckula said:
Was doing some reading on effects of fluoride on cannabis...

"Some growers believe if you let water sit out for a day or two that it will evaporate the chlorine and chloramine away. This is only half true. Chlorine evaporates easily; chloramine doesn't. And you will also find that water suppliers are adding fluoride, another potentially toxic element."

Have you seen any data to suggest that fluoride and chloramine inhibit cannabis growth or flowering? There is substantial research in the horticultural field for negative effects. Curious is others have done comparison growing or know of research.
S

Chlorine will evaporate out pretty easily. Chlorates can be removed using a Vitamin C tablet, crushing one pill into about 1 bath tub's worth of water, or with iron powder. To remove the Fluoride, you either need an activated alumina (aluminum oxide), a bone carbon filter, distilation, and reverse osmosis,.

Realize because of our insane drug policies and laws, there's not been a definitive scientific examination of these things in the water. However, I'd guess that if ALL plants aren't too keen on it, then cannabis will also fall in line.

And it seems flouride isn't too good for people either. Besides rouning your teeth, it can cause a lot of serious bone issues, since flouride seeks out bone, but once there has a reaction to the calcium, and starts making your bones more porous.

There is substantial data in the horticulture industry that shows fluoride inhibiting phosphorous uptake and therefore limiting flowering. The new Bud Booster water filter (Elevate 420 | Water filters for Cannabis Growers) will remove chloramine and fluoride without the maintenance issues of reverse osmosis. 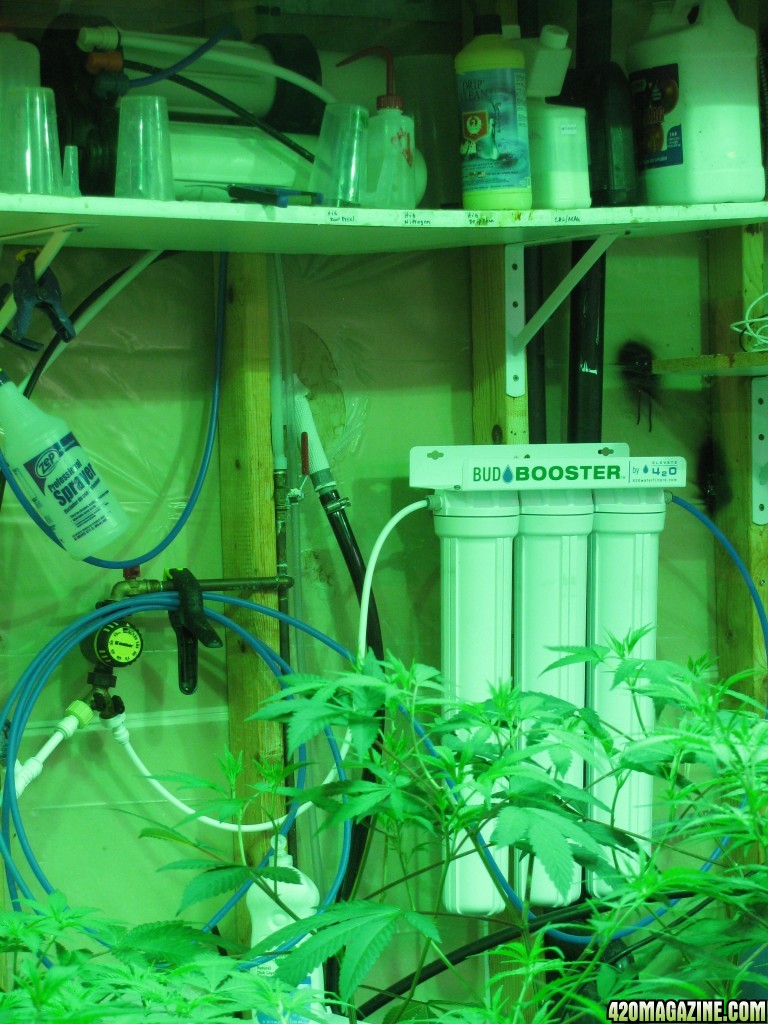 That ought to handle it pretty well. For a poor man's version, a BC or activated Alumina filter to get rid of the flouride, sitting out for chlorine removal, and then just crush up some vitamin C tablets for your chlorates. there's some research stidies coming out now looking at adding vitamin c to plants for air pollution resistance aid. And if you're having to get rid of chlorates, it's not a bad way to kill 2 birds with 1 stone.

First crop at LoDo Wellness in Denver using the Bud Booster by www.420waterfilters.com show a 33% increase in production over a chloramine filter alone.
S

Why not distill your own water its really pretty easy and once you have the still built you could use it for other extracurricular activities....

I leave a poly garbage can outside to catch rainwater that I transfer to a standard size Rubbermaid garbage can kept indoors with a fish tank aerator in it.

Has anyone tried using the boiled water ( after letting it cool ) that u used with your vegetables?? As I know there's some nutritional value of that water ( of course veg would need to be organic )

Yo Yoitoke I like that idea , it could be used as a tonic once a week or so to feed the soils microbes/fauna

Has anyone tried using the boiled water ( after letting it cool ) that u used with your vegetables?? As I know there's some nutritional value of that water ( of course veg would need to be organic )
Click to expand...

Unless your soil is primed with correct bacteria you'll probably end up with some funky odors. I sometimes dump it into my compost pile to feed the bugs. I may start adding it to compost tea, as long as it has time to ferment. Good idea.

Enter the Contests on your way to winning POTM: (you know where to go.)

Down the Rabbit Hole ... a refuge for wayward plants and critters.
Rabbit's BIG LEAP - High Brix with Doc's kit
Pest and Problem Solver : Proper way to water a plant
How to take a CCO suppository
A

I started my plants in small pots early this Spring, and set them out in raised beds by May. They looked very good for the first three months, then the growth seemed to slow down, then I noticed the leaf tips turning brown. Those leaves soon died completely, and the plants suffered. After buds began growing, they seemed healthy at first, but did not get as big as other plants of this strain grown in previous years using well water (in a different city). Some plants died, while others kept growing at a very slow rate. I started using bottled water on them, and they showed definite improvement. I finally started harvesting, even though the trichomes are tiny enough to be almost invisible. It is NOVEMBER, and I used to harvest in August or September. Most of the vegetables and flowers growing in the same soil nearby were also dying. I live in a city with higher than average Fluoride levels, so I will definitely be getting some sort of filtration system before I try to grow anything else. I did use a hose-end filter that supposedly removes chlorine but not fluoride. That seemed to help a little but not enough. I know this was not a strictly controlled, scientific test, but I am convinced that Fluoride is deadly to most plants, and not too good for humans and animals, either.
G

I started using seachem prime, and it seems to work great without interfering with anything but chlorine and chloramine.

1g of potassium metabisulphite in 100L, before you add anything, does the job. It is a homebrewing ingredient.
My grow thread: White Rhino Fem In 4-Way Scrog Under CMH 315W Gaslight Schedule
You must log in or register to reply here.
Share:
Facebook Twitter Reddit Pinterest Tumblr WhatsApp Email Link
Top Bottom