I'm a beginner grower. Discovered this place earlier in the year via @Katins ' diaries of 2019! Lurked for a while and eventually gave in and created an account.

I stumbled onto growing by stumbling onto a curious looking seedling in our herb garden. I didn't believe my GF at first when she said she thought it looked like a cannabis plant. I was deeply excited, in a way I didn't immediately recognise.

In the beginning, I tried to suppress this excitement. I said to my GF (and myself) that I didn't have any high hopes. I moved the plant from the herb garden into some spent, store-bought soil, perforated by old, dead tomato plant roots, (yes, I know, horrifying in retrospect), and said, what will be, will be. In the meantime, in other parts of the world, a different kind of entity was beginning to grow and spread, and would be referred to widely as Covid-19.

Fast-forward a month or so. The plant was UNDENIABLY a cannabis plant. My GF and I debated how it got there. I believe that I threw one of my bagseeds into the herb garden while very stoned one day and didn't remember. She thinks it might've been the birds. Will we ever know? At this point of the story, my country decided to move into full lockdown to counter the pandemic. I started working from home. The plant was a month old, a tiny specimen, sitting on our deck, perhaps 8 or 9 inches tall. We were into autumn at this point, with temperatures ranging between 15 and 20 degrees celsius.

My mind, itching to escape the overwhelming amounts of information pouring in about the pandemic, eventually latched onto the plant for some respite. I did my first bit of active research about cannabis cultivation. One of the first facts I learnt was that my plant had germinated in the worst time of the year possible, the beginning of autumn. It also occurred to me that it's so tiny because its roots probably didn't have any space to grow in that spent soil. Heartbreak. But nothing I could do, I thought. It was also around this time that the plant started showing sex. Definitely a female.

I learnt about plant training for the first time. As she was showing the first signs that she was entering flowering, I decided that I would have one shot to try my hand at training. I did the simplest form of LST - bent her sideways. And also gave her a little defoliation.

It's illegal to grow where I live. But the excitement I mentioned at the beginning has stretched its own roots out - I'm caught! I've invested in a little starter LED and a cabinet to start a micro, stealth grow. My accidental plant is so small, and the deck where she lives so far from the street and passers-by, that I deem her not a risk to be outside until she meets whatever end she has coming.

I will be lucky to get a joint's worth of weed from her. She is still growing in that spent, store-bought stuff. I don't have any appropriate nutes for her, so I have been feeding her some banana peel tea for P and K. It's been dropping to 8-9 degrees celsius outside at night, so I have been bringing her in at night and have fashioned her a hat to stop light exposure while she's in the house. I call her Hatty. Even though she probably won't yield me anything (much), I love her dearly, and will try to take as good care of her as I can, until the end. 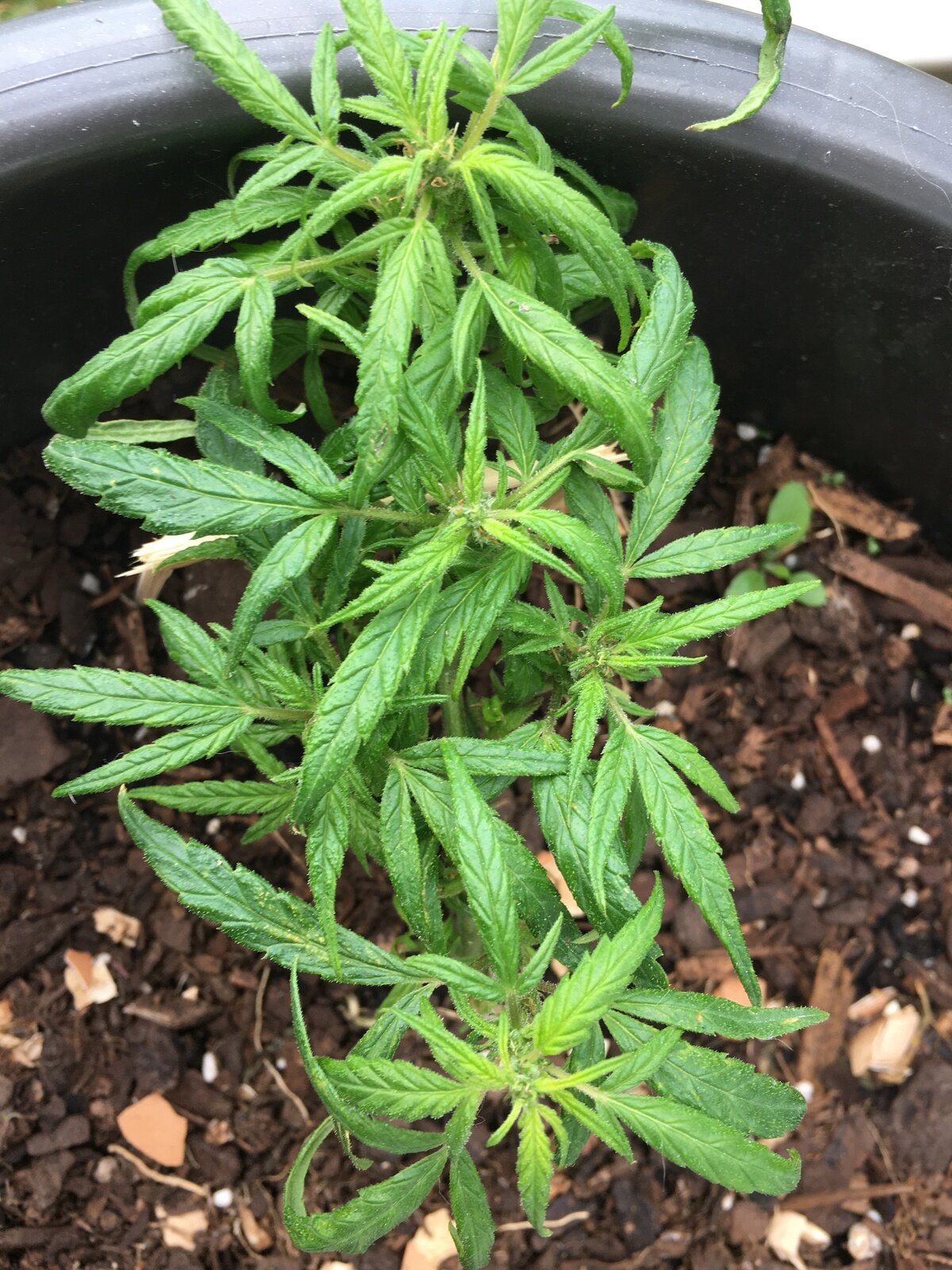 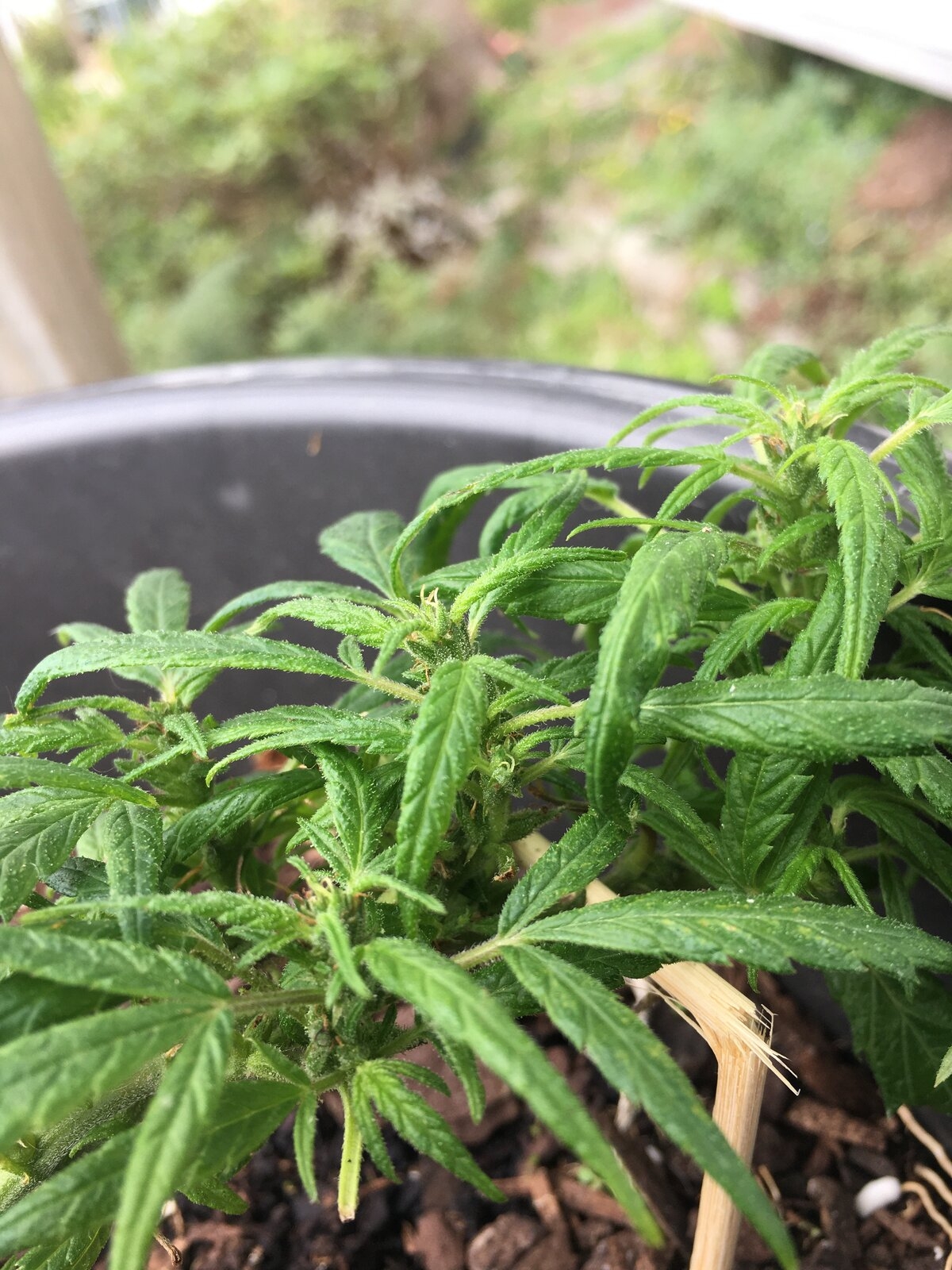 While Hatty is doing her thing, nearing the end of her time, and in anticipation of the indoor gear I have coming in about 2 weeks, I have also sprouted 3 seedlings. All bagseed, all presumably from the same batch. I have 20-30 bagseeds. I will probably look to invest in some proper seeds once I've gained more experience and confidence.

I now have some better soil, containing peat, perlite, neem, lime and worm castings. I am waiting for the deliver of Canna Bio Flores and Bio Vega. Sadly, I can't get any Megacrop where I am. I've heard so much about it and feel like it would've been ideal for a noob like me! 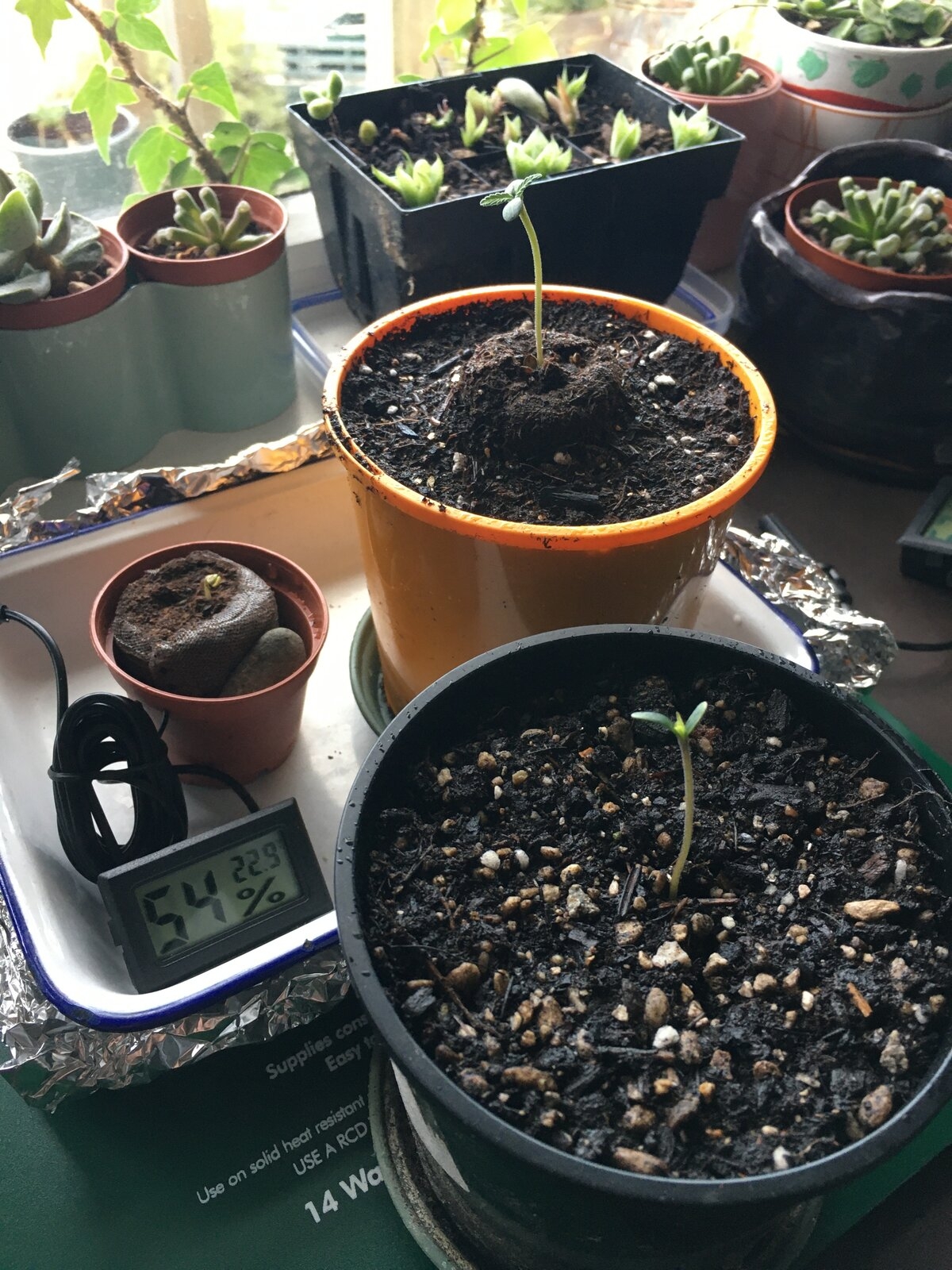 My intentions and experiments

1. I would like to take care of Hatty until she's ready to be harvested

I think this is self-explanatory.

This seedling will go into my indoor cabinet. It will be fed with the Canna Bio line. So I guess that makes them "pseudo-organic", i.e. no living soil and with derived nutrients, no matter how "organic" the source/derivation.

3. I would like to test how the other seedlings/plants cope with a temperate winter (5 - 15 deg celsius), while living indoors at night

As I only have space to grow 1 plant indoors, 2 of my seedlings will be forced to live outside, at least in part. I plan on leaving them in the sun during the day, when it's the warmest, and bringing them in when it gets dark. While in veg, I will have no choice but to leave them under ordinary house lights for the evening, after the sun has gone. There's also a possibility that I will have some spare LEDs that I can dedicate to them for the period during the day when they are inside. Who knows, maybe ultimately I can make some space for a small cardboard box to veg them in? Regardless, for now, they will be part-outdoor and part-indoor plants.

4. I would like to test some less orthodox nutrient sources (banana peel, coffee grounds, eggshells, etc.)

For my suboptimally placed plants, I would like to feed one of them with "teas" made from bananas (PK) and coffee grounds (P) that have been sitting in 1L of water for the past week. In the further future I would like to move to living soil and amending it myself.

5. I might try different (permutations/combinations of) training techniques on each of them

I haven't decided yet who-what-when.

6. I would like to learn how to water them properly

I will be trying my hardest to follow @Emilya 's advice on watering.

It's the beginning of winter here. It's too cold for cannabis plants but I'm growing them anyway. Some of my plants will get fed with improvised (ill-advised?) nutrients and some of them are in crappy soil for now. (See: "fool")

Plant 1, "Hatty", flowering in crappy soil, outside in temperate winter cold for the day, and inside at night.

All bagseeds. All will live an indoor-outdoor lifestyle until my indoor growing gear arrives, at which point I will select one to be grown "optimally".

Ultimately, the strategy is to do the best with what I've got, while in some areas, indulging some ill-advised impulses, partly to get them out of my system, partly as fun experiments and learning opportunities. This is a passion project, and I am growing solely for enjoyment. Some yield for my own consumption would be a bonus!

That's all for now! If you made it to the end, thanks for reading this long introductory post!!
Last edited: May 28, 2020
Fools Rush In: Newbie's adventures in suboptimal conditions (First grow)

My first macro challenge with the seedlings: How do I get the best of my indoor and outdoor conditions? How do I adapt the seedlings, who germinated indoors, to life outside?

I'm attempting to "harden" the seedlings gradually. I left Desert and Baglady on the deck for 2 hours, as it was both still and cloudy outside, my hope being that those are gentle enough conditions for them to overcome to start with.

I will do the same tomorrow if I see no ill-effects from today. Maybe I will leave them out for longer.

They are now back inside, on the windowsill, on their heatmat.
Fools Rush In: Newbie's adventures in suboptimal conditions (First grow)

You cannot flush nutrients from your buds! Click the two links below for the science:
#noflushclub link 1 • #noflushclub link 2
PERPETUAL...Carnival, Chocolope, and Power Plant now in progress. Come for the banter!
Do we need to pH adjust our nutrient solutions?
Low Stress Training (LST) - a tutorial
Supercropping - The Hows and Whys
Aeroponic cloning bucket - The Cloninator - build your own!
Rice Balls to Quickly Lower RH in Jars
Great macro pics for under $10

Honoured to have you aboard, @InTheShed !
Fools Rush In: Newbie's adventures in suboptimal conditions (First grow)

In like Gonzo.
Kismet Goes Gonzo For Carnival & Chem Dog

Ok . Read up. First thing . Ditch the soil. As a beginner go straight into coco or perlite. Passive hydro. Can get organic with it without the soil. Faster results.
Kismet Goes Gonzo For Carnival & Chem Dog

Focus on worm farming before you rock the soil. In um 3 years?
Kismet Goes Gonzo For Carnival & Chem Dog

Kismet said:
Ok . Read up. First thing . Ditch the soil. As a beginner go straight into coco or perlite. Passive hydro. Can get organic with it without the soil. Faster results.
Click to expand...

Oooooohh I am really keen to go down this route! But there is some strange tendency in me to want to learn about this most basic and ubiquitous medium first.

... that and I can't afford to spend much more money on this right now

Please indulge my soil leaning for now, and I have the feeling coco will enter the scene a bit later this year

Kismet said:
Focus on worm farming before you rock the soil. In um 3 years?
Click to expand...

Yeah I think the living/super soil thing is just a dream for now, for various reasons. Will experiment with coco before that!
Fools Rush In: Newbie's adventures in suboptimal conditions (First grow)

I like the hempy buckets easy way to grow. Aka perlite thoroughly washed then a hole drilled in a 5 gallon bucket(or 3 gallon} 2 inches above the bottom. No more bugs in your grow. For the most part.
Kismet Goes Gonzo For Carnival & Chem Dog

Kismet said:
Focus on worm farming before you rock the soil. In um 3 years?
Click to expand...

In good weather you can make a shit-ton of castings from a small bag of worms, and more worms!


syenite said:
Please indulge my soil leaning for now, and I have the feeling coco will enter the scene a bit later this year
Click to expand...

Feel free to soil and not have to water every damn day!
You cannot flush nutrients from your buds! Click the two links below for the science:
#noflushclub link 1 • #noflushclub link 2
PERPETUAL...Carnival, Chocolope, and Power Plant now in progress. Come for the banter!
Do we need to pH adjust our nutrient solutions?
Low Stress Training (LST) - a tutorial
Supercropping - The Hows and Whys
Aeroponic cloning bucket - The Cloninator - build your own!
Rice Balls to Quickly Lower RH in Jars
Great macro pics for under $10

InTheShed said:
Feel free to soil and not have to water every damn day!
Click to expand...

Why i like the perlite/hempy method. The 2 inches reservoir at the bottom means i can go camping or the beach for the weekend.
Kismet Goes Gonzo For Carnival & Chem Dog

Did someone say hempy?

FelipeBlu said:
Did someone say hempy?

¡Hola Syenite! Are you a rock hound too?
Click to expand...

Float on by my hempy journal sometime..

Will do Felipe. I loved coco before. The fungus gnats.
Kismet Goes Gonzo For Carnival & Chem Dog

Alright, coco/perlite/hempy fans - your thoughts have been received, understood, and appreciated!
After I'm done and satisfied with crawling through the soily trenches I will visit one of your provinces.

Take your time. The easy way will always be there..
FelipeBlu’s Outdoor Hempy Photos & Autos 2020 (current)