To understand football, Nate Jackson says, you need to remember one inherent truth about the game: a human body was not made to absorb that kind of punishment.

"There's no safe way to get hit by a truck," Jackson puts it.

Jackson, author of the football memoir Slow Getting Up, spent six seasons playing tight end for the Denver Broncos. Recounting a lifetime of football-related injuries is nearly impossible, because, as he put it: "You're always kind of battling with something."

To hurry players back from injury, a cocktail of pain pills and anti-inflammatory injections are typically dispensed. Hydrocodone, Vicodin, Percocet, Toradol, Celebrex, Vioxx (before it was recalled for increasing the long-term risk of heart attacks and strokes) and so on. The widespread use of highly potent prescription pain drugs, some argue, has allowed the NFL to become the multibillion-dollar industry that it is today, but at a price.

A 2011 study by researchers at Washington University in St Louis found that former NFL players were four times more likely to abuse prescription painkillers than the general population. And more than seven in 10 players who used pain medications during their playing days went on to abuse them, though former offensive tackle Kyle Turley said he thinks that number is actually closer to 90%.

Turley and Jackson are among a group of former players trying to fight this epidemic of prescription drug abuse by lobbying the NFL to change its policy and allow players access to an alternative: medical marijuana.

Currently, marijuana, whether recreational or medical, is on the list of prohibited substances. All NFL players are tested once a year during the pre-season. "As long as you pass that test, you can medicate all year with marijuana," Jackson said.

That's what Jackson did. After tinkering with various cocktails of painkillers throughout his playing days, he decided that medical marijuana was the most effective for him.

"I feel like I can speak about this because I've tried everything," Jackson said. "I've shot up HGH [human growth hormone], done the injections, tried the pills, tried marijuana. It's not that I'm this big marijuana guy, it just helped my body the most."

Jackson guessed that at least half of all active NFL players medicated with cannabis, an estimation corroborated by other former players such as Chris Kluwe.

Though some consider medical marijuana an excuse for healthy people to con their way into buying weed for recreational purposes — college football coaches have called player marijuana use an epidemic — ex-players insisted that was far from the truth. "It wasn't about 'I'm going to go get blazed and tear up the town.' It was like, 'Yeah, I smoked a bit and passed out on the couch because I felt like crap after practice,'" Kluwe told HBO's Real Sports with Bryant Gumbel. The advent of other forms of cannabis, from topical creams to edibles to tinctures, can also help players target specific ailments.

For years, Turley had been given a plethora of different prescriptions to deal with injuries, as well as insomnia, mood disorders and suicidal thoughts. Side-effects were overwhelming, though, and he called the experience "horrific". But his football-related medical issues remained, and pills seemed like the only option.

But Turley said that moving to California last year and becoming a medical marijuana patient changed his life. "It was exactly what I was looking for in rest, recovery, alleviating my mind," he said. He eventually weaned off his other medications. "I don't take Aleve, Advil, aspirin, nothing," he said. "I've gone nine months now, what I like to say, completely drug-free."

Earlier this year, Turley founded the Gridiron Cannabis Coalition, a group of former players dedicated to sharing their personal experience with medical marijuana and advocating for its inclusion in the NFL.

One of the goals of advocates is to push the NFL to fund research into how medical marijuana might benefit players. Harvard Medical School professor emeritus Lester Grinspoon, a leading researcher in the potential health benefits of marijuana, sent an open letter last year to the NFL commissioner, Roger Goodell, urging him to finance a scientific investigation into marijuana's potential in treating the after-effects of concussions.

Grinspoon also called on the NFL to end its policy prohibiting cannabis. This may not be that far-fetched. The National Hockey League, for instance, does not include marijuana on its list of banned substances. And the NFL didn't always prohibit players from using cannabis. In fact, the league only began testing players for marijuana in the 1980s, a direct result of the emerging national "war on drugs".

Though few active players have openly advocated for changes in the league's marijuana policy, one leading coach has expressed his support. Seattle Seahawks' head coach, Pete Carroll, who has led his team to the past two Super Bowls, said last year he thought medical marijuana should be allowed if it would benefit the players. "Regardless of what other stigmas may be involved, I think we have to do this because the world of medicine is trying to do the exact same thing and figure it out and they're coming to some conclusions," Carroll said before Super Bowl XLVIII.

The NFL may ultimately be forced into reform of its prescription opiates policy. Earlier this year, approximately 1,300 retired players filed a lawsuit against the NFL, alleging that teams and their medical staffs were illegally pushing painkillers in a way that jeopardized players' long-term health. The suit claims that information about the severity of injuries was withheld from players as they were given prescriptions to get them back on the field as quickly as possible. It also says that some former coaches and assistants told players they would be cut from the team if they didn't take painkillers and return soon from injury. (A similar lawsuit filed in 2014 was dismissed and is now being appealed.)

Jackson also suggested that marijuana use could reduce alcohol abuse among players. "For guys who fail the marijuana test and are in the substance abuse program, they're getting tested three to four times a week and can't medicate with marijuana," Jackson said, "so many turn to alcohol instead."

Commissioner Goodell expressed an openness to consider the issue in January 2014, saying: "We will follow medicine and if they determine this could be a proper usage in any context, we will consider that." But, he added: "Our medical experts are not saying that right now." For its part, the NFL has liberalized its marijuana testing regime, increasing the threshold for a positive test from 15ng/ml of THC in the blood or urine tests to 35ng/ml, but even that new level is far below the 150ng/ml threshold set by the World Anti-Doping Agency, which oversees testing for the Olympics.

Were the NFL to lift its marijuana ban, it could create a competitive advantage for teams in medical marijuana states. Right now, 20 of the league's 32 teams play in states that permit medical marijuana; those teams could wind up with an edge in attracting free agents if NFL marijuana rules were to change.

Turley said the Gridiron Cannabis Coalition has tried to reach out to the NFL league office on the issue but hasn't received much response. "They're just giving lip service like they were on concussions," he said.

Still, both he and Jackson were hopeful that the NFL would ultimately relent, whether in five years when the new collective bargaining agreement with players is negotiated or perhaps sooner.

"Players need medication, like it or not, to go back on the field every week," Jackson said. "Marijuana's already keeping the game afloat. Roughly half of those guys are already using it every week. They have to keep it a secret, though. If they get caught they get fined or suspended. It's a really uncompassionate stance to take." 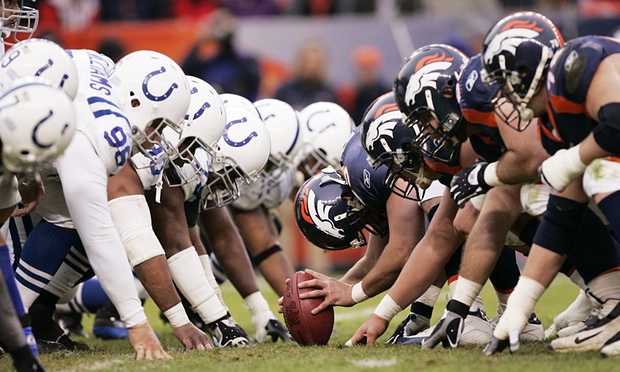 Awesome! We need all the help we can get and if professional athletes are getting in on the action along with other types or celebrities and the general public as well, then our government will soon have no choice but to admit that Cannabis prohibition effects people from all walks of life and we're not just a bunch of lazy no account stoners after all and that stigma doesn't hold water anymore.

The more nonbelievers see their favorite celebrities are using Cannabis, the more inclined to be converted to the facts they will become until the day comes where there are no more nonbelievers out there to push back and the few that can't be converted, will be so overwhelmed that their voices will never be heard again.

I am so glad to see the negative long lived stigma about Cannabis is finally starting to loose it's foothold and that it's happening in our time so that the next generations to come will be free of living in a world of fear that's been created by a failed war on our beloved Cannabis plant.

People are finally waking up to the fact that a world with failed policies like Cannabis prohibition are holding the human race back from addressing more important issues that effect us all because of over expenditure of valuable resources.

Roadblocking politicians better start taking notice if they want to keep their jobs because beloved celebrities hold more weight than your average Joe does when it comes to convincing people to do the right thing.