Former Player Speaks Out About Cannabis In Pro Football

It's no secret that professional athletes have been known to use illegal drugs, but many times it seems the drugs of choice are related to performance enhancement on the field or court. But one former NFL star said he believes that most of the professional football league's players indulge in smoking marijuana, not PEDs. However, the NFL's alleged reefer madness is perhaps not for the reason that may immediately come to mind.

As many as 70 percent of NFL players smoke marijuana, said Ricky Williams, a one-time star running back for a handful of NFL teams, Sports Illustrated reported. He doesn't have to look any further than into a mirror, as Williams has emerged as somewhat of a champion of cannabis. It is a stance he maintained as a player before, after and during his multiple suspensions from the league for violating the NFL anti-drug policy with weed use.

It's no coincidence Williams is currently speaking out about marijuana. He's set to open a gym in San Francisco that markets and caters to marijuana smokers. Williams is looking to jump start a new career with California's growing marijuana industry. "It's like I have the chance to make a difference and be a superstar," he told Sports Illustrated before somewhat correcting himself. "Be a superstar again."

Williams said marijuana carries a negative connotation for those who use it, and successful athletes are typically not associated with smoking anything that experts have for decades said has a negative effect performance-wise, the Associated Press reported.

"I think a lot of people buy into the stoner stereotype where guys just sit on the couch, smoke and don't do anything, and they're not very motivated," Williams said. "I found when I was playing football that using cannabis helped me relax physically, relax mentally and even spiritually."

Beyond recreational use, studies have shown that marijuana use may be especially appealing to athletes who have engaged in grueling physical contact sports, such as tackle football, because of pain and the degenerative effects of chronic traumatic encephalopathy (CTE) brought on from experiencing multiple concussions in a career, according to Medical Daily.

"If cannabis is implemented and [the NFL] can lead the science on this, they can resolve this brain injury situation in a big way," said former NFL player Kyle Turley, the co-founder of Gridiron Cannabis Coalition, which is made up of other retired players. 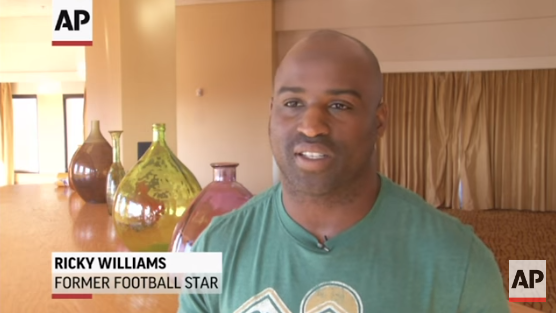