California - When Fresno County supervisors approved the medical marijuana cultivation ordinance in January, they might not have anticipated the workload that would go with it. The ordinance banned medical marijuana gardens and established a fine of $1,000 per plant, which growers may appeal. Supervisors, who serve as the appeal board, have overseen a handful of cases in the seven months since it became law.

But on Monday, supervisors will spend an entire day hearing appeals from residents who were issued medical marijuana cultivation citations. There are 12 appeals on that agenda. A second day of hearings is scheduled for October. It's expected a similar number will be on October's agenda. The hearing schedule has some board members pondering their role in the process.

Supervisors could hire someone to rule on the appeals, board Chairman Andreas Borgeas said. "We should not be the body where appeals are heard," he said. "We could make more efficient use of this process through an appeals officer." But Supervisor Debbie Poochigian said she's "not interested in handing the job off to someone else. "I think it's our job and our responsibility," she said.

Supervisor Henry R. Perea suggests creating a citizens hearing board made up of medical professionals, law enforcement, lawyers, medical marijuana advocates and others with knowledge of the issue. He said he thinks medical marijuana advocates are advising people to file appeals in an attempt to overwhelm supervisors. But he also said the ordinance should be reviewed to ensure that it's being carried out consistently.

"We've determined we have an issue with marijuana and there is a lot of marijuana floating around the community that is far beyond the use of medicinal," Perea said. "Until it's resolved on a broader scale (state or federal level), we have to enforce it." A significant issue in a lawsuit filed against the county by a woman who was fined $43,000 is whether state law allows 15 days to clean up a public nuisance. The county's ordinance labels marijuana plants as such.

Lawyer Brenda Linder, who represents some of the people filing appeals, said the county must give violators time to dispose of the plants before levying fines. Initially the county did not, Linder said, but she has spoken with violators who removed their plants and were not fined. Under the Fresno County ordinance, fines can be imposed immediately.

The ordinance allows deputies to make a judgment call and not cite violators when they remove the plants, said Fresno County sheriff's Lt. Patrick Hanson. When deputies arrive and find plants being removed, growers are not always fined, he said. "Within the ordinance, we can choose to give you your ticket." The Sheriff's Office pushed for the ordinance after more than 40 violent incidents related to marijuana cultivation were reported in unincorporated areas in 2012 and 2013. "I think we will show that there is a lot of violence that did not occur" because of the ordinance, Hanson said. "We won't be able to put our fingers on it but we'll see that numbers have dropped."

If you go:
What: Fresno County Board of Supervisors meeting
When: 9 a.m. Monday
Where: Fresno County Hall of Records at Tulare and M streets in downtown Fresno 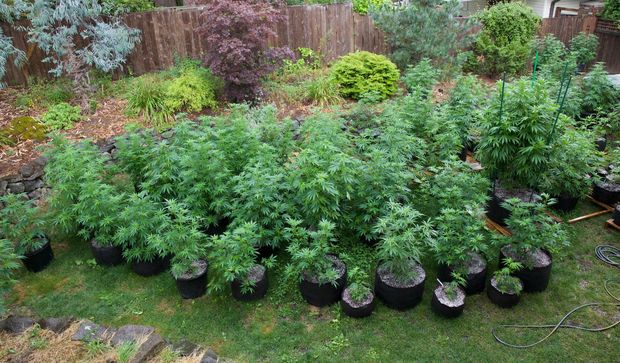 I hope the patients use language like "Shame on you, Mr Jackbooted Supervisor!"
"Want to take my cancer away with those plants you took?!"
Radogast