Frank Marzano knows from personal experience that the wheels of justice grind slowly. Way back in 2007, he was arrested on marijuana charges even though he had plenty of patient information proving the pot was MMJ. His attorney, Rob Corry, eventually proved that in court -- and at 1 p.m. today, nearly four years later, the police are returning his confiscated property.

Marzano's trip through the justice system began in 2007. Back then, authorities were searching for a fugitive named Randall Zandstra, who was suspected of holing up at a home in Loveland. U.S. Marshals got a warrant to search the property for Zandstra under complicated circumstances described as a "sham" in a brief Corry filed in his 2010 appeal of Marzano's conviction. But Marzano, the person actually living there, refused to let them keep poking around after determining that Zandstra wasn't present.

They did so anyhow, and subsequently found lots of marijuana -- and while Marzano had what's described in the brief as "41 pages of medical marijuana documentation" establishing that he was growing the weed for patients, he was busted for assorted drug beefs anyhow. He was ultimately cleared of distribution charges, but he was convicted of possession and cultivation -- a verdict that frustrated Corry.

"The judge held that Frank couldn't call as witnesses any patients who had not affirmatively and expressly designated him as a caregiver on their registry card," he told us last summer. "And if you read the definition of caregiver in the Constitution, it's an adult who has significant responsibility for the well-being of a patient -- and whether or not that person is on the registry card isn't dispositive of that person being a caregiver."

Corry also believed "the judge had a substantial bent of mind against Frank and medical marijuana. The judge said that I, his defense counsel, couldn't use the phrase 'medical marijuana' during the trial. He told the jury, 'I have ruled that there's no such thing as medical marijuana.' So I had to say, 'marijuana for medical use.' The judge used the words 'medical marijuana' over and over again, as did the prosecution, but I was under a separate command that really polluted Frank's opportunity to get a fair trial."

In the end, these arguments proved secondary to a more important factor: According to the Colorado Court of Appeals, which ruled last August, the search of the house was illegal.

Why? The ruling noted that permission to search the home had been granted by Anthony Dugasz, whose late mother had owned the house. But they didn't get clearance from Marzano, who held the lease -- and that proved to be a key point. Here's an excerpt from the ruling:
Upon entering the home, officers found defendant, who answered in the affirmative that he had a lease or other arrangement with Ms. Dugasz to be on the property. The existence of such an arrangement without Mr. Dugasz's knowledge was certainly possible, given his limited knowledge of the property. At this point, the police should have obtained consent from defendant to continue searching the house or obtained a search warrant if he refused.

In oral argument, the People conceded that they relied exclusively on the consent of Mr. Dugasz for the warrantless search. However, a third party does not have the authority to consent to a search simply by virtue of his ownership of the property... Defendant confirmed to police officers that he had a lease or other arrangement with Ms. Dugasz to occupy the property, and it is undisputed that he never expressly gave authorities consent to search. The People, therefore, had the burden to show that he was an occupant without permission, a burden which they did not meet. Accordingly, the initial search was unlawful because it was conducted without consent from the present occupant...


Did the illegality of the search mean the marijuana that led to Marzano's distribution and cultivation conviction should have been considered inadmissible? In a word, "yes," as the following explanation from the ruling makes clear:
Because probable cause for the search warrant was based upon the officers' discovery of a large marijuana growing operation in the house during an illegal initial search, the search warrant was also invalid...

This decision should have marked the end of Marzano's ordeal -- but shortly thereafter, the Colorado Attorney General's Office filed a petition for rehearing. In the end, though, the Colorado Court of Appeals decision held.

Today, Marzano, Corry and representatives of the Rocky Mountain Caregivers Cooperative and the Cannabis Legal Institute's Patient Advocacy Project will walk into the Fort Collins Police Department... and they're expected to walk out shortly thereafter with property seized back in 2007 as a result of a search that a court says never should have taken place. 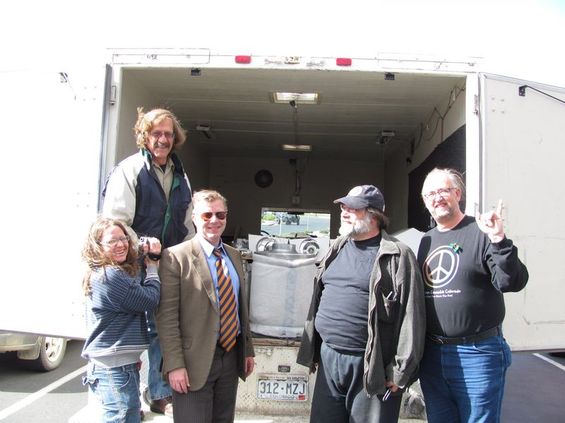 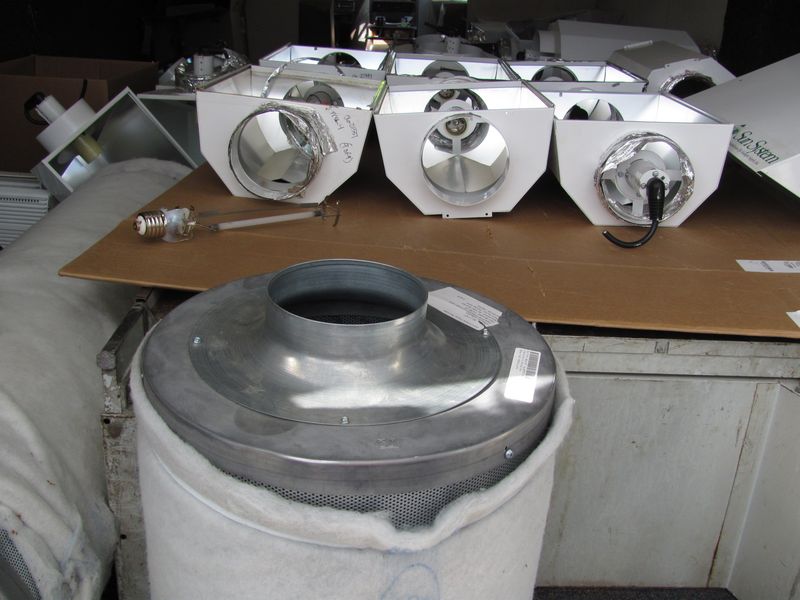 Some of the returned equipment.​