The sun had barely risen Friday, April 1, when the Douglas Interagency Narcotics Team tactical response unit broke through the side door of Vanessa A. Brammer and Michael Scott Luther's house in Gardiner.

"There was no knock, and they did not call out 'police' before they came through the door," Luther said. "They only said 'police' after I came around the corner (into the living room) and ran into a cop's gun."

Luther went on to say that the cops jammed a gun into his gut and he went down on the floor.

Things moved quickly after that. Brammer ran into the living room to find what she estimated to be 20 police officers in her house.

"This is one of the most traumatic experiences of my life," Brammer said. "I have never had a ticket or did anything wrong. This is a nightmare."

The nightmare turned to public humiliation when DINT officers arrested the couple on drug charges and allegations they had endangered their 6-month-old son by forcing him to inhale marijuana fumes through a vaporizer mask.

The couple denies they did anything of the sort, and the baby tested negative for tetrahydrocannabinol (THC), the main psychoactive substance in marijuana, according to a Department of Human Services social worker.

But that night, according to Luther (who was roused from sleeping in the nude), he was forced to lie naked and double-handcuffed on the floor of the living room for 10 minutes before he was allowed to put on boxer shorts, despite the fact that a female social worker had followed the officers into the room.

Luther then sat on a stool in the dining room for another 10 minutes before he was served with a search warrant, he said.

"I didn't even know what they were here for," he said Thursday at his home. He said he knew how to act toward officers because he's had prior experience with the law. He served a 10-year prison term for burglary associated with robbing a police evidence warehouse in Hawaii.

While officers searched the house, Brammer said, their baby was crying in the bedroom. After half an hour, she said, she'd had enough. When she told the officers that she was going to get her child, she said, they pointed guns at her.

Officers found a vaporizer Luther used when smoking marijuana for his episodes of extreme nausea and dizziness. According to Luther, he has undergone extensive testing to determine what is causing his health problems, but so far doctors have been unable to make a diagnosis.

Luther said he has had a medical marijuana referral for the program since early March. Detective Mark Norris of DINT insisted Friday that Luther did not have a valid card.

In his initial press release Monday, DINT commander Lt. Curt Strickland said the couple had used the vaporizer with a mask to cover the baby's nose and mouth to give marijuana to the baby.

"There was some confusion initially if they used the mask," Strickland said when asked about the allegations. He then amended his statement to say, "It was the end of a bag attached to a valve they were using."

According to Luther, however, "it is impossible to use the bag and valve to give marijuana to a baby. The valve closes if you try to push smoke out. You have to inhale deeply to get smoke out of the bag. A baby cannot do that."

He admitted, however, that he'd made a mistake in not locking up the substance up to keep it out of reach of his child.

The search warrant listed numerous items associated with growing marijuana that were to be searched for and seized. It did not, however, include two Daylite canoes and a Panasonic flat-screen TV that had allegedly been stolen in a burglary in Lane County.

The kayaks and TV had been given to Luther by a Florence man, he said, who was unable to pay rent on the room he was renting from the couple.

When asked why no one at the house was charged with having stolen property, Strickland said the couple could be charged with theft by receiving, but hadn't been yet.

After searching the house, DINT officers arrested Brammer and Luther, and a DHS social worker took the baby into protective custody.

Brammer was released on bail shortly after being charged. Luther was jailed in Roseburg, and was released Monday on his own recognizance, without being required to post any amount of the $356,000 bail that a judge had initially ordered.

Of that amount, Luther said, only $6,000 was for the child endangerment charge. The other $350,000 was related to the drug charges.

"That's what's criminal," Luther said, "that endangering a baby would only be worth six grand."

The warrant showed police were looking for a major marijuana production facility, but what they seized instead were two viable plants and two nearly dead plants, Strickland said.

When asked why they didn't seize the all other items listed on the search warrant, Strickland said he didn't know.

Luther claims DINT officers also seized some smoking pipes, "a tiny bud of marijuana in a bottle we didn't even know we had, and some leaf stems taped up in a packing box."

The couple had been living in the neatly kept house on Mound Street for about a month, Brammer said.

"We moved there from Florence to get away from the guy who was renting a room in our house there ... and it's probably him who told the cops that lie about how we were giving pot to our baby," Luther said.

"We would never do that." 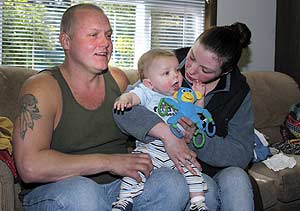 Umpqua Post/Lori Newman
M. Scott Luther and Vanessa Brammer visit their 6-month-old son in Reedsport's DHS office Friday. Brammer says she just wants to get her baby back from the state, which took him into protective custody when police believed he was being exposed to marijuana smoke in the family home in Gardiner.​