We like it when New Mexico makes the travel or food channels for its Hatch green chile; we're not keen on making the late shows as the butt of bong jokes.

Thus we feel some trepidation upon learning former Gov. Gary Johnson, who advocates legalizing marijuana, may run for president in 2012.

The Republican, with a lot of Libertarian in him, was on Thursday's straw poll at Saint Anselm (N.H.) College. It's the first coming-out for some who seek a feel of their political strength.

It's gets our name out there. New Mexico has always had somewhat of an identity problem – as in, "So, do y'all get to Mexico City much?" But, Johnson has always been a tad off the spectrum in the political world.

We're not sure just how serious Johnson is about gaining the presidency; perhaps he just wants some face time on the primary dais in order to get his marijuana message out? However, Johnson had been seen on the Saint Anselm College campus several times.

We do know that he's one for calculated moves. After all, it wasn't until he'd secured his second term as governor that he made public his position of marijuana legalization.

Johnson is most popular for his stances of anti-tax and anti-bureaucracy.

The legalization of marijuana – mostly as a government money-maker – is only beginning to reach the whisper stage among politicians. It's still considered political suicide to come out in favor. And those whispers may get no louder, ever, at least in this generation. Many pundits agree on that.

Thus it's with mixed feelings we watch our former and popular governor, a real fiscal hawk, test his wings for the highest office in the United States.

Twice in a row a New Mexico politician runs for the presidency? Sounds great. 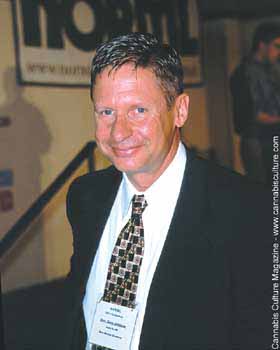 He's my number two choice so far... Dr Ron Paul being number one.
I like how they said "he's got a lot of libertarian in him", like that's a bad thing...
yeah, gotta watch out for those freedom and independence loving libertarians.
"The Truth shall set ye free, but first it shall make ye miserable."
(Soren Kierkegaard)
M

He's an interesting candidate, but as with Ron Paul has a weak political showing. Since the only way to be a good politician, is to be a generally slimy and dishonest person.

I am very excited to watch this whole thing unfold and hope that at a minimum Johnson and Dr. Paul get the Marijuana Legalization message out for some great discussion nationally in the future.

Gary Johnson for President in 2012