Gov. Nathan Deal said during his recent State of the State speech that while he supports the removal of criminal penalties for the state's medical marijuana users, Georgia's recreational marijuana users will still face arrest and prosecution for possessing the drug.

"I hope to sign legislation to decriminalize cannabis oil so families who need and obtain it legally will not be prosecuted for possessing it," Deal said during the address. Though derived from the same plant, cannabis oil contains very little THC, the chemical which causes marijuana users to get high. Cannabis oil has been found to be an effective treatment for those suffering from seizure disorders.

Several Georgia families, desperate to procure cannabis oil to help their sick children, have moved to Colorado to buy the medicine legally. Deal said that those families would be welcome to return home without the fear of arrest or prosecution should decriminalization become law.

Despite the leniency of Deal's stance toward cannabis oil, he remains staunchly opposed to legalizing marijuana for recreational use. The governor said during his address that he wants to bring "children home from Colorado without becoming Colorado." Colorado is one of a handful of states which have legalized recreational marijuana use.

Deal's remarks show support for State Rep. Allen Peake (R-Macon), who has proposed legislation that would allow Georgia families to acquire liquid cannabis oil which contains less than five percent THC in states like Colorado and bring it back home without fear of arrest or prosecution. Peake's legislation adds a caveat that Georgians who return home with cannabis oil must have a loved one who suffers from a disease named on a yet-to-be-created list.

Peake also supports the legal growing of marijuana for medicinal purposes in Georgia, and originally submitted HB 1 with a provision to immediately legalize the process. However, a modified version of HB 1 instead proposes the creation of a committee that would examine and determine the best way to regulate the growth of medical marijuana plants in the state, the Macon Telegraph says.

In last year's legislative session, the Georgia Senate approved a cannabis oil bill, but the measure didn't win pasage in the House. 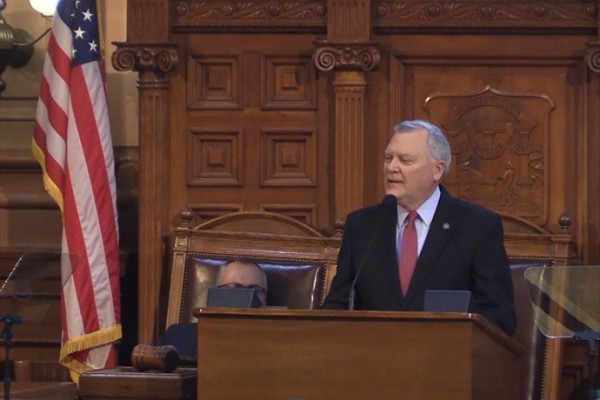