Georgia State Representative Allen Peake is questioning the state's laws governing the use of cannabis oil to assist families of children with medical conditions.

For thousands of Georgia families, the oil is truly life-saving. CBS46 has done stories in the past highlighting the use of cannabis oil to treat conditions in children, including epilepsy and Crohn's disease.

Before the last legislative session, there were thousands of families using the oil and now several more are expected to gain access to the substance now that the list of conditions has been expanded from 8 to 14, including autism.

Representative Peake says there's a huge problem for those families because there's really no place to purchase the oil in the state.

"There's no ability to access the product and so we're having folks come to us and say 'I have a medical marijuana card. I'm registered with the state but I don't know how to get the product'," says Peake.

The state allows for 14 medical conditions which can be legally treated with cannabis oil but the state doesn't allow any cultivation of cannabis or the oil and Peake says there's a gaping hole left by lawmakers.

That's why he has taken it upon himself to connect Georgia families who qualify for the oil with out-of-state providers.

"I am not involved in the transportation of oil here to Georgia. I honestly have no idea how it gets here," said Peake. "We've provided a vehicle for them to basically access a product that we know has been lab tested, is safe and consistent and has been proven to be successful with many Georgia families. We don't provide a product that's above the 5 percent THC level that's allowed in Georgia law. We're only providing product to those who are properly registered with the state. And we're not selling the product, we're giving it to folks."

But Peake is operating in a grey area. Everything he is doing is in compliance with Georgia law but there are questions about the transfer of cannabis oil across state lines, which the DEA classifies as a schedule 1 drug. That breaks federal law.

"Our law, as it's structured right now, is causing parents to either violate federal law by bringing it back themselves or having someone else do it and provide it to them," said Peake. "That's why I'm not involved in the transportation of the product across state lines. But it does show the fallacy and the gaping hole in our existing law. That we have to look at breaking federal law in order to provide relief to Georgia citizens who are properly registered in the state to possess this product."

Also, skeptics have said that Peake is only fighting this to score political points, something he disputes. He says he's not running for federal office or governor. He says he's not even likely to be a state representative for much longer. He says he's doing it simply because it's the right thing to do. 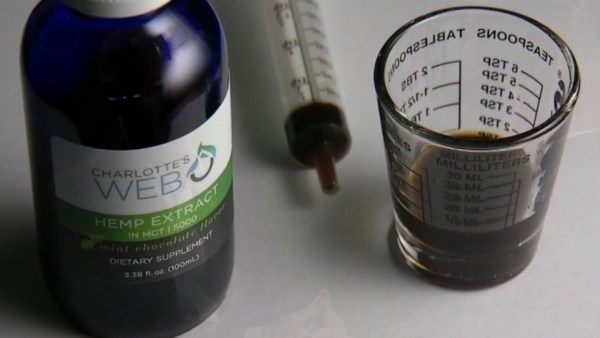 K
Cannabis Edibles Are Not Legal In Georgia

K
In-State Medical Marijuana Cultivation May Be On Georgia's Horizon