its was called night queen , got 12 off another called the ultimate
Plant and pest problem solver

ive a smaller place now so im breeding for the perfect height , the strains from dutch passion get MASSIVE too big at times lol they do smaller so the Cinderella jack was a nice height and the shape of a christmas tree blows the head off you 25%+ , i like her , the grandaddy purple and og cross i did was a lovely height also with plenty of thc id say 22/26 % very relaxing , you just melt , the bruce banner was short and packs a punch too , so i copied them too , the harder hitting the less you need to grow , im using it for medicine so this suites my needs
Plant and pest problem solver
S

That's what I want to do without too much pissing around with inferior strains. Cinderella 99 and Jack Herer are legendary but I've never had the pleasure. I am curious how "modern" hybrids are, are they even better if that's possible?
I am just outdoor container growing, so I'm only doing it once a year, I really want to find the best strains/breeders to go with and then look to pollen chuck between them to make plenty of female seeds to cut the stress out of being somewhere that ordering seeds to is a PITA. Any good strains or breeders that come to mind let me know or PM me.
Are you generally just growing Autos? The big fear with them is often that there is a loss in potency, but if you're getting mid 20's for Autos that sounds pretty damn good.
#Quadsquad

ive had autos blows regular out of the water , theres strong ones there and tricks to make them stronger , the Cinderella jack was lab tested twice with average 26% in 70 day finish , i cant see why every one dosnt do them , its a 1/4 of the hassle and you have a supply always
Last edited: Jul 27, 2020
Plant and pest problem solver

my top strains for pain , laughter and sleep
blue diesel gives you the giggles
gods gift giggles and relaxing as any thing ( my fav ) like a Thai massage lol 70 day finish from seed
bruce banner gives you a heavy stone if you cant sleep and in pain ,short little plant finish 60 days to 70 from seed its a good back up plant for extra weight
Cinderella jack , good all rounder , gives you a big head blast for about 20 mins then your off to chill city for a long time, finish 70 days from seed
Plant and pest problem solver

TheNuttyProfessor said:
ive had autos blows regular out of the water , theres strong ones there and tricks to make them stronger , the Cinderella jack was lab tested twice with average 26% in 70 day finish
Click to expand...

I had a grow that inadvertently was exposed to a lot of regular drought stress and when harvested remains the stickiest plant I have grown and it had superb potency which I put down to the drought stress.
Last grow I did extensive supercropping I don't know if that assisted, probably not as it was done in stretch and not near the end of flowering like folk who deliberately stick a nail thru the stem base to hopefully add potency. Is there anything additional that I could be doing? I am impressed you are favoring autos and don't feel let down on potency compared to regulars.
#Quadsquad

you can use a MH on the last two week of full flower , i also split stem
Plant and pest problem solver
S

What is MH (it'll probably come to me as soon as I post)?
#Quadsquad

TheNuttyProfessor said:
you get hps light and = mh metal halide
Click to expand...

Ahh ok, I only grow outdoors under the big yellow bulb in the sky, I'm not familiar with the indoor growing terminology, so now I understand, giving my grow a bit of MH will be out of the question.

its lovely has the best smells too , great for oils also due to the sticky buds
Plant and pest problem solver
S

Here in NZ there is no way to verify the THC% of bud. You can only take a guess. A lot of strains seem to be listed over 20% but others a lot less yet people speak very highly of them, I guess it is the 'sum is greater than the parts' and all the other cannabinoids & terpenes that come into play, I think I saw the term 'entourage effect' to describe this, the Blue Diesel is relatively low compared to the Bruce Banner so clearly there is more going on than just THC%. I read of a study, I think in Canada, of something like 300 strains from dispensaries where the average THC% was found to be, I think, about 14%, which was way lower than what I was assuming it would be, say, 20+%.
#Quadsquad

think this was one i just did 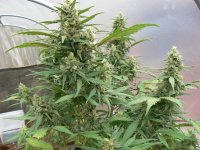 you can make the pollen sacs out at the bottom buds . yes theres loads of bull , i know these autos work they are the best ive found so far
Plant and pest problem solver

Jumping in if ya don't mind. I love that sideway cabinet. Nice clean setup. This should be a fun show to watch. Looking great so far.
FreeWill Koolaid For All That Stop By....Donations Appreciated
Current Grow...Greenhouse Scrog Blueberry/Kush, White Widow, Scooby Snacks #1
How To Ask For Grow Support
Cannabis Plant and Pest Problem Solver

i think i remember you by another name maybe ? lol