Now that Arizona's once-rosy budget outlook has evaporated, a state lawmaker wants to decriminalize and tax marijuana as a way to raise revenue. After seeing Colorado's experience with legalization, Rep. Ethan Orr, R-Tucson, said Friday that lawmakers should get creative about how they're going to confront the state's dim finances when the Legislature convenes in January.

Revenue projections provided Tuesday to the Legislature's Finance Advisory Committee predict the state will end this budget year with a $520 million deficit and an up to $1 billion deficit in the coming fiscal 2016. "Given the massive budget shortfall we're facing, we need to look at revenue and I think this is a logical place we need to look," Orr said. "I think it's time to have an intelligent conversation about it (legalization)." Similar attempts to decriminalize pot have failed in recent years.

Orr said lawmakers should consider his proposal before supporters of an effort to legalize recreational marijuana take their measure before voters in 2016. The Marijuana Policy Project of Arizona initiative almost certainly will be modeled after the voter-approved marijuana program in Colorado. For about a year, Colorado has allowed adults 21 and older to buy and possess up to an ounce of pot, which can be purchased at one of the many marijuana shops allowed under the law.

Colorado's 2013 measure taxed recreational marijuana at 25 percent and earmarked $40 million in tax revenue for school construction. The state's Legislative Council recently estimated Colorado can expect to bring in about $175 million through the fiscal year that ends in 2017. Orr said he plans to talk with Republican leadership in the coming weeks to try to build support for his proposal. Leadership in the House and Senate did not immediately respond to a request for comment about Orr's idea. "If I don't think I'll have the votes, I won't take it forward," he said. Orr said he know he'll have a tough time pitching his idea to his colleagues. But, he said, he'd rather have state lawmakers impose a tax and direct its uses rather than leave it to an unpredictable plan from a citizen's initiative.

Orr said taxes from marijuana sales in Arizona could be put towards education, law enforcement and tax incentives "for certain industries." Marijuana is legal for about 50,000 Arizonans, but only for medicinal purposes. Patients must get recommendations from a physician and obtain a card from state health officials under the Arizona Medical Marijuana Act approved by the voters in 2010. Any effort toward full legalization in Arizona is expected to be met with stiff opposition from law-enforcement officials and possibly from medical-marijuana dispensary owners who have spent the past few years building their businesses around the medicinal model. 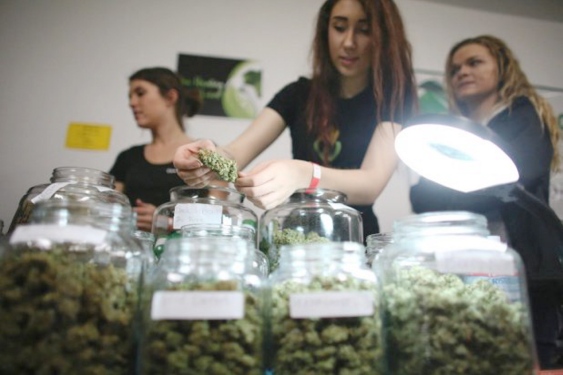 When I think of Arizona, I think of Kimberly Yee... (That's right, Ms. Yee, cannabis users have long memories... Who would've thunk it?)
M

Orr said he know he'll have a tough time pitching his idea to his colleagues. But, he said, he'd rather have state lawmakers impose a tax and direct its uses rather than leave it to an unpredictable plan from a citizen's initiative.
I take offense by Senator Orr's statement. He and the rest of his cronies want to make MORE money on the backs of the pot smoking civilians in Arizona. Already we have to cow-tow to dispensary's within 21 miles of our homes. If we have a dispensary then we can no longer grow marijuana on our own. Gotta make that revenue. Who owns these dispensaries . . .anyway?
J

People own the dispensaries. Arizona is about old Chicago money and political war, then add in rackets and real estate booms and busts. And it''s the 25 mile rule for those poor folks.

OK 25 miles. Arizona might have come from money and politics but we're short of right now. The most important issue is the Republican party trying to side with legalizing marijuana:
1. To get votes
2. To garner more revenue
All from the very people who have less. I'm on a fixed income and in constant pain. The dispensary here in OV is as far away for me as the insurance I should have to cover pain pills.

T
If You Support Legal Marijuana, Memorize These 13 Stats