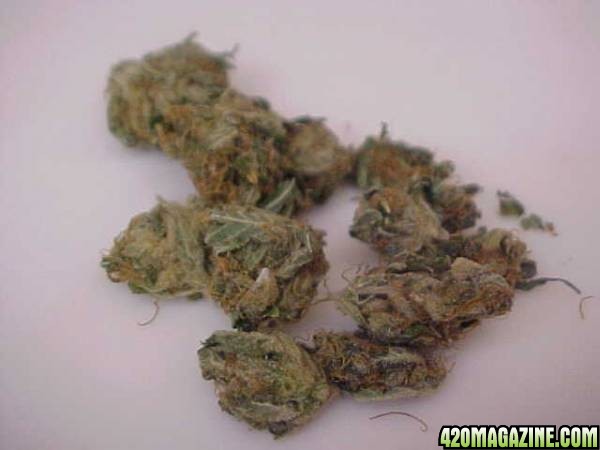 Here's some Kush. What we call Krip in the Durrty. And heres what u do with it

That shit looks good, but it don't look like the usual kush I see. Also, why's it called Krip if it's Kush?

for some reason all kind bud in FL is called krip or baby krip....
... long as i got blutns to smoke and 40s to guzzle, imma keep this shit together like a jigsaw puzzle...

That looks fyre..i can see the crytsals on it..nice cam too...i had some of that shit last night mixed with some haze..blew my gotdam mind
O

I don't have any kush, but I sure would like some.

Very fine nougents, what's the buzz like?
"Champange for my real friends, and real pain for my sham friends."

Holla at me on my cell
:allgood:

Thanks folks. The reason why I called it Kush. Is Because One night I was blowin on higrade wit my homie. Then He just told me it was Kush. But it smelled like Krip. So I really dnt know. And another time, one of my friends said he had white widow. But it did'nt really smell like dat krip it smelled good do. As long as it's High Grade and not dat bobby brown, and reggie miller. But I dnt pay much since i'm so frequent wit my cnct. So I get eights and half eights. nothin big. Just try to keep me steady ya kno.
The high is great. Clean, Sweet perfumes like aroma. I guess it has a lemony smell to it. With Some sourness to it. But after smokin BS regs and then u get this. It's the best shit. But I been blowin on this stuff almost awhile. And the highs not the same. But there great and clean. That's what I need and look for. Oh yea dat smell too. But It's powerull. ur definately gonna cough when u hit it. Especially in th mornin.:smokin3: