Patient advocates celebrated the signing of two bills to improve Hawaii's 13 year-old medical marijuana program — the first updates to pass the legislature since the program began. Approved today were measures to move program oversight away from the Department of Public Safety Narcotics Enforcement Division ("NED") and to the Department of Health ("DOH"), and to adjust the type and amount of medical marijuana a patient can legally possess.

HB 668 CD1 moves oversight of the program to the DOH, a move welcomed by advocates as both symbolic and substantive. HB 668 will go into effect January 1, 2015, giving time for the transition between departments to occur.

SB 642 CD1 increases the amount of medical marijuana a patient or caregiver can grow and possess. Lawmakers also added a provision requiring that only a patient's primary care physician can certify them for eligibility, but later clarified that people covered in the Federal system (e.g. military dependents at Tripler) and those seeing specialist physicians will still have access to Hawaii's medical marijuana program. This measure will also take effect in 2015 — one day later than HB 688.

Representative Della Au Belatti, who advocated strongly for the bills, said: "Today's bills represent a significant step forward in improving Hawaii's medical marijuana program and aligning it with best practices of medical cannabis programs in other states. By refocusing the program on medical matters such as the role of the primary physician and the role of the Department of Health in providing regulation and program oversight, the State can better ensure the compassionate treatment of people suffering from debilitating health conditions."

The policy shift is part of a serious discussion on the future of marijuana law in the Islands, mirroring reforms happening around the country. Bills to tax and regulate marijuana like alcohol and to remove criminal penalties for adult use garnered unprecedented public support and legislative interest and received hearings, but were ultimately shelved until 2014 with no final votes taken.

Pam Lichty, President of the Drug Policy Action Group, said: "While Hawaii still has important work ahead in updating our medical marijuana program, these bills are a significant first step. The emergence of legislative champions for medical marijuana like Senators Will Espero and Josh Green and Representative Della Au Belatti shows that lawmakers recognize the broad public support among voters. We look forward to working with the 2014 legislature to establish state-regulated dispensaries, and to make additional patient-centered improvements to the Hawaii program."

Vanessa Chong, Executive Director of the ACLU of Hawaii, added: "In 2000, Hawaii led the nation as the first state to legislatively establish our medical marijuana program. Now, a total of 18 states plus Washington, D.C. have programs. Finally, 13 years down the road, Hawaii is moving toward patient-focused policies and away from a law enforcement approach. These bills do not address every concern, but are the first real steps toward a more sensible public policy – we are encouraged and will redouble our efforts next legislative session." 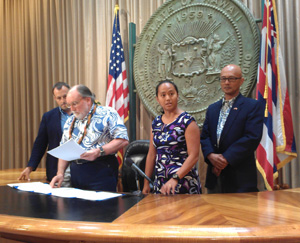