Vote Hemp and the Hemp Industries Association, the nation's leading grassroots organizations working to revitalize industrial hemp production in the U.S., urge Governor Brown to support SB 676, the California Industrial Hemp Farming Act. After moving smoothly through the California legislature with bi-partisan support, this landmark legislation is now up for the Governor's signature and would establish guidelines for farming the non-psychoactive plant that is used in a wide variety of every day consumer products, including food, body care, clothing, paper, auto parts, building materials and bio-fuel.

"California is one step closer to building a successful hemp industry in the Central Valley," said Senator Mark Leno, following news on September 7 that the Assembly approved the legislation in a vote of 49-22. The legislation allows California farmers to grow industrial hemp for the legal sale of seed, oil and fiber to manufacturers. The Senate approved the bill last night in a concurrence vote of 26-13, making the next stop, Governor Jerry Brown's desk.

Introduced by Senator Mark Leno earlier this year, SB 676 would create an 8-year pilot program to allow industrial hemp farming in four California counties: Kern, Kings, Imperial, and San Joaquin. This is the third time in ten years that the California legislature has passed a hemp farming bill. However, SB 676 is further refined than previous bills and has significant support from businesses, farming groups, local governments, labor unions, and even law enforcement.

Strong support for the bill has come from Kings County Sheriff David Robinson who wrote in a letter to Senator Leno: "I strongly support this important step in giving our farmers another crop option and another economic opportunity, to help create jobs during these difficult economic times." Letters of support from the Kings and Kern County Sheriffs, as well as the Kings County Board of Supervisors who voted unanimously to support the bill, can be viewed at: Vote Hemp: Information: General: Archives: SB 676 Support Letters .

The bill is also endorsed by the California State Grange, the UCFW-5, the Imperial County Farm Bureau, California Certified Organic Growers and other leading farm organizations. SB 676 takes careful and measured steps toward industrial hemp cultivation with a 4-county pilot program that will sunset after 8 years. Near the end of the pilot program the Attorney General will report to the legislature on law enforcement impacts, and the Hemp Industries Association (HIA) will provide a report on the economic impacts.

"Hemp is a versatile cash and rotation crop with steadily rising sales as an organic food and body care ingredient. Today, more than 30 industrialized nations grow industrial hemp and export it to the U.S. Hemp is the only crop that is illegal to grow yet legal for Americans to import," explains Eric Steenstra, President of Vote Hemp and Executive Director of the Hemp Industries Association.

California businesses spend millions of dollars each year importing hemp from Canada, China and Europe. Demand for hemp products has been growing rapidly in recent years. It is estimated that the U.S. hemp market now exceeds an estimated $419 million in annual retail sales. From natural soaps to healthy foods, there is a large variety of "Made in California" hemp products that could greatly benefit from an in-state source of hemp seed, fiber and oil.

For the environment, the agricultural benefits are not limited to the versatility of uses. Industrial hemp is an excellent rotation crop because its dense growth smothers weeds without herbicides and helps to break the disease cycle. Hemp requires less water and agricultural chemicals than other crops, has deep roots that leave the soil in excellent condition for the next crop, and is proven to increase yields. These benefits save farmers money and reduce the amount of pesticides, defoliants and chemical fertilizers that run into our waterways.

"Vote Hemp's goal is to relieve California farmers of the over-reaching prohibition on industrial hemp cultivation and reintroduce the crop to the state," says Patrick Goggin, California Legal Counsel for Vote Hemp. Among the numerous California based companies supporting the bill are Dr. Bronner's Magic Soaps, makers of North America's top-selling natural soap, and Nutiva, a rising star among innovative health food companies. Both of these businesses currently must import hemp from other countries. "We expect Governor Brown to do what's best for the state of California and sign this important bill into law," continues Goggin. 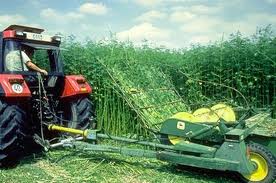