Darren Miller is ready to enjoy his second chance at life.

The 50-year-old Granite City man is putting out the word that a steady diet of cannabis oil coupled with chemotherapy wiped out what doctors had only months earlier diagnosed as "incurable, inoperable" lung and pericardial heart sac cancer.

He'd basically been given about a year to live, with chemo.

"Glad to be here, glad to be anywhere with the diagnosis I had," Miller said by way of introduction during a sitdown with KMOX News.

He carried with him a stack of medical documents to back his claim that he's been given a clean bill of health just months after being handed a death sentence.

"I have the medical records to show the evidence of what I'm saying," Miller said. "Now it's going to be interpreted differently by people everywhere, but I've researched and there are thousands of testimonies that you can go on the internet and see every day people doing this and it's been going on for years."

After his diagnosis was handed down on his 50th birthday, Miller began looking desperately for a cure beyond chemotherapy, which left him with "blisters on his mouth, blood hands and feet" according to his Facebook page.

Miller's wife quit her job so they would qualify for medical assistance and they moved to California, where he became a legal resident.

There he started using cannabis oil and learned how to produce it himself.

"And then today, which is seven months later, they tell me I am completely cancer-free — not remission. I've cured my cancer," Miller said. "Now, am I giving credit to the cannabis oil? Absolutely. Am I giving credit to chemo? I would have to say yes, too. I did both."

Now that he's back in Illinois, Miller said he's running a "compassionate cannabis" program to help others who find themselves in the same situation he was in.

"What we're doing is we're just making small amounts to keep it around and educating others on how to do this," he said. "Because if you have access to any kind of cannabis, I can give you links on my site to show you how to do this in your own kitchen and save your life."

Miller's claim of the healing power of cannabis oil comes ahead of the opening of the Metro East's first medical marijuana dispensary in Collinsville next week. 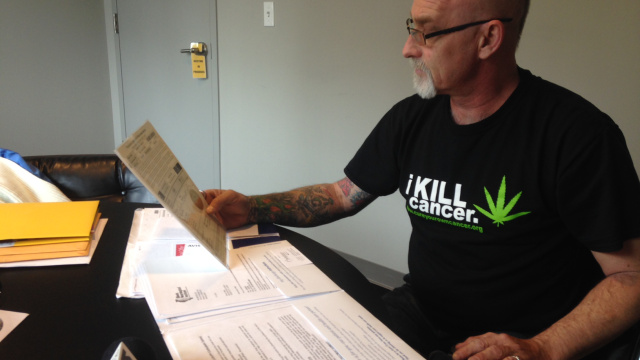 So great,bless that guys heart,and may god keep him here to enjoy the rest of his peaceful life.

Sent from my SM-N900V using Tapatalk

Disclaimer: All images here are fictitious and are sourced from external sources. I have no knowledge of any illegal or legal growing of any controlled substances under any local, state, or federal law.

K
How Cannabis Oil Can Help Save A Cancer Patient's Life