I am continuing the perpetual grow goal I have going and planted 6 feminized seeds from The Cali Connection of Grape OG. Only two sprouted. They have been pretty slow growing too in my opinion, but they are starting to look respectable. I must say, I am not impressed with The Cali Connections other plants I have grown. Hermies and stretchy poor growing plants with minimal trichome development.

The Grape OG seeds looked underdeveloped and were sold at $60 for a 6 pack. I planted them 1" into dirt and they took over a week to pop up. This was the slowest germination of seeds I've had in a while. They were planted on 6/1/17. They have been growing under 300 watts of metal halide with an air cooled hood about 15" away and temps staying around 85 with humidity in the 40s-50s. I topped each plant as soon as there was sufficient space to top at the first node with 5 fingered leaves. The smaller plant that is on the right of most of the photos didn't develop 5 fingered leaves until the 4th node. However, this will allow for a more even growth as it is a bit shorter than the bigger plant. So far, the smaller plant is lagging behind training and trimming by about half of a week.

The first topping was done and the plants were allowed to grow. I then removed the side shoots, leaving the fan leaves and top shoots. I am using a single bamboo stick and gardening wire to train the top shoots horizontal in a flux styled technique. Here are some photos from July 1st, one month after seeds went in soil. 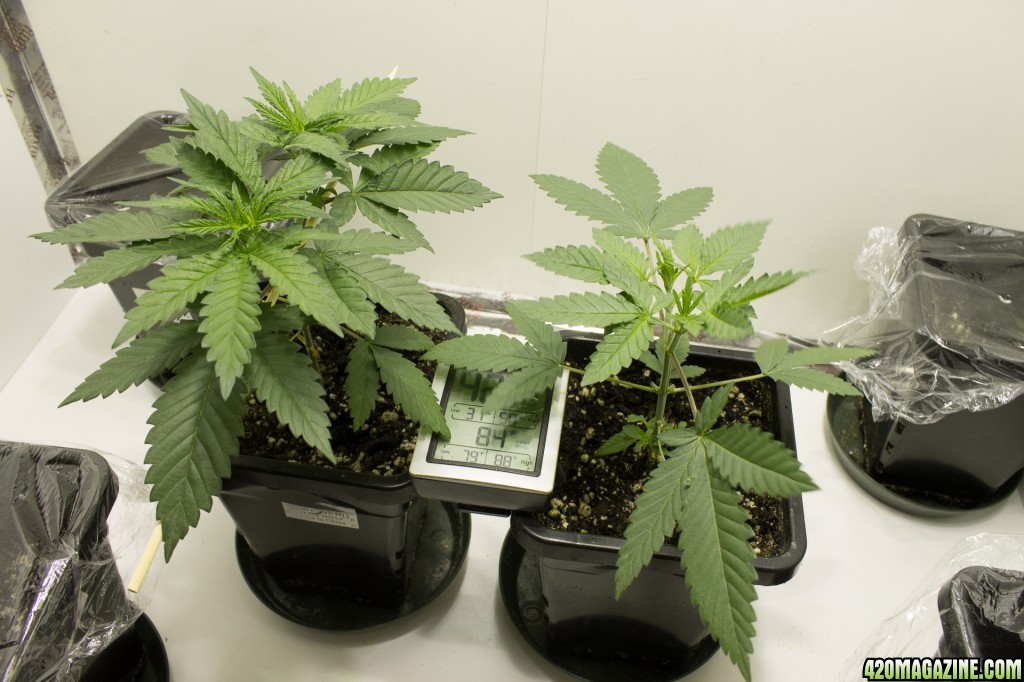 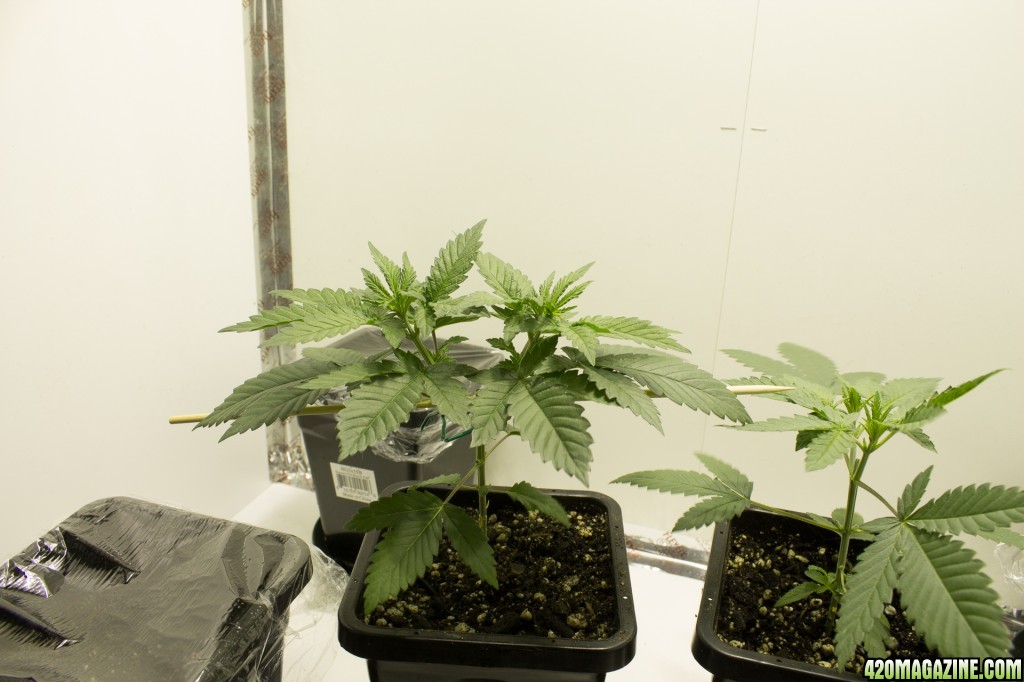 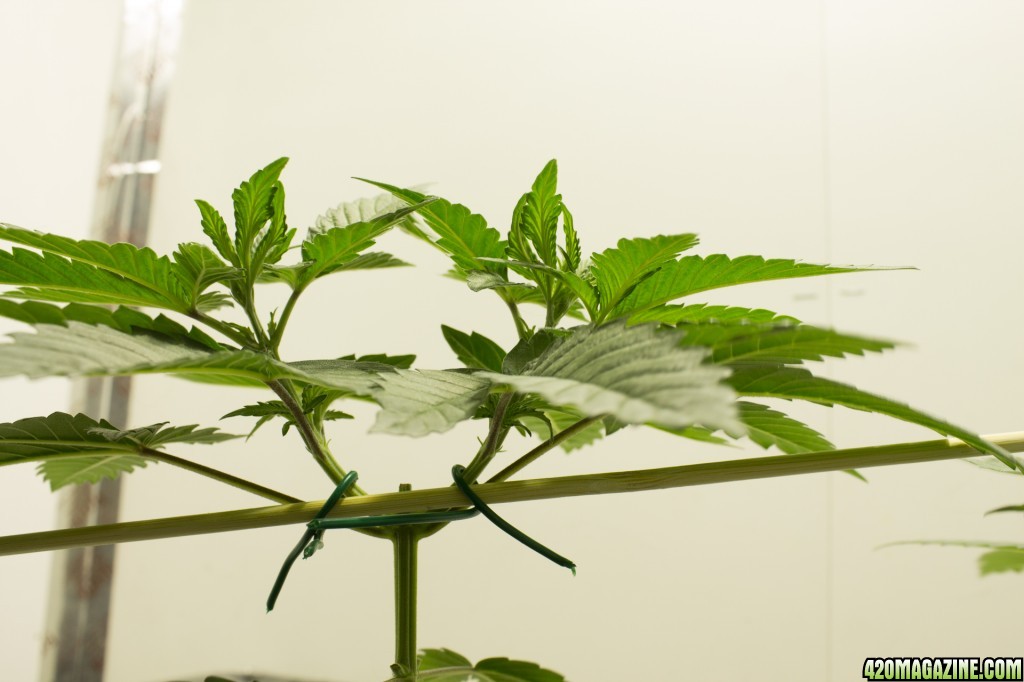 I had already attached the bamboo to the shoots to start bending them over so the next stage of training wouldn't be as stressful. I believe the initial bending also helps stimulate growth hormones to be released as the vigor improved slightly afterwards. I proceeded to then Cut off the second node shoots from the top shoots. Those second node shoots were vertical and would interfere with the goal of a perfectly even canopy. 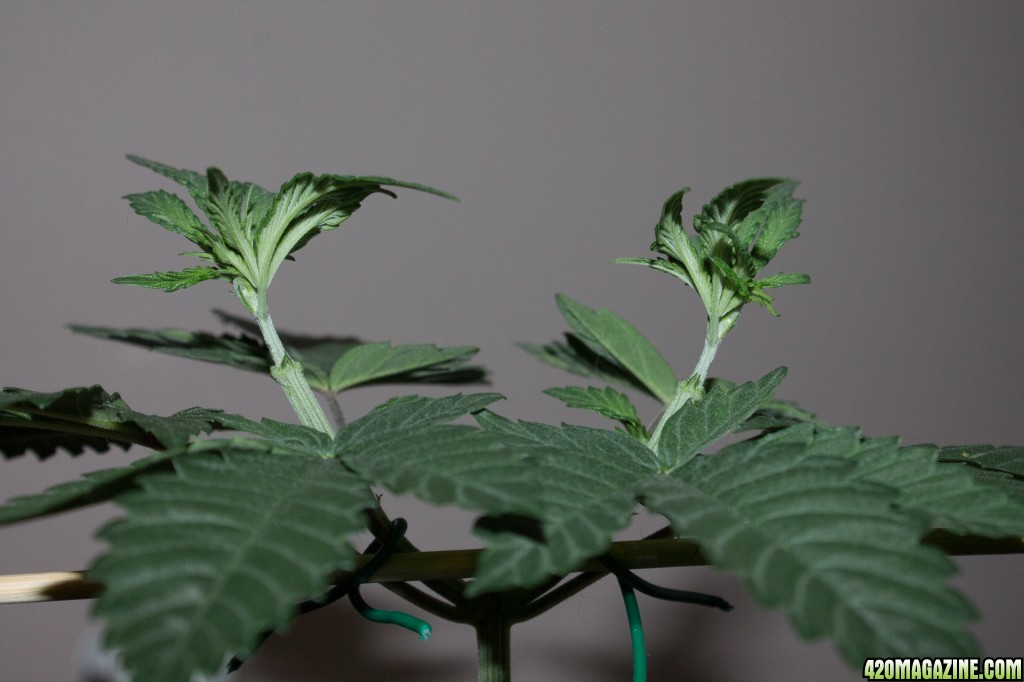 The side shoots were then wired to the bamboo to create even horizontal growth. 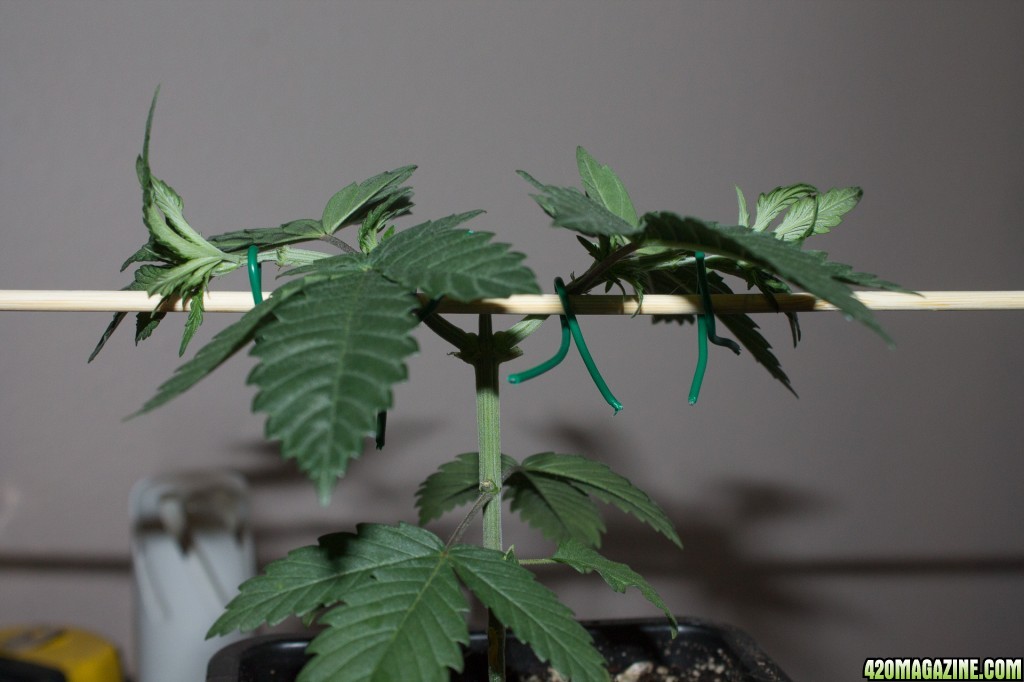 The plant on the right was then also given the initial training treatment to prepare it for horizontal growth. 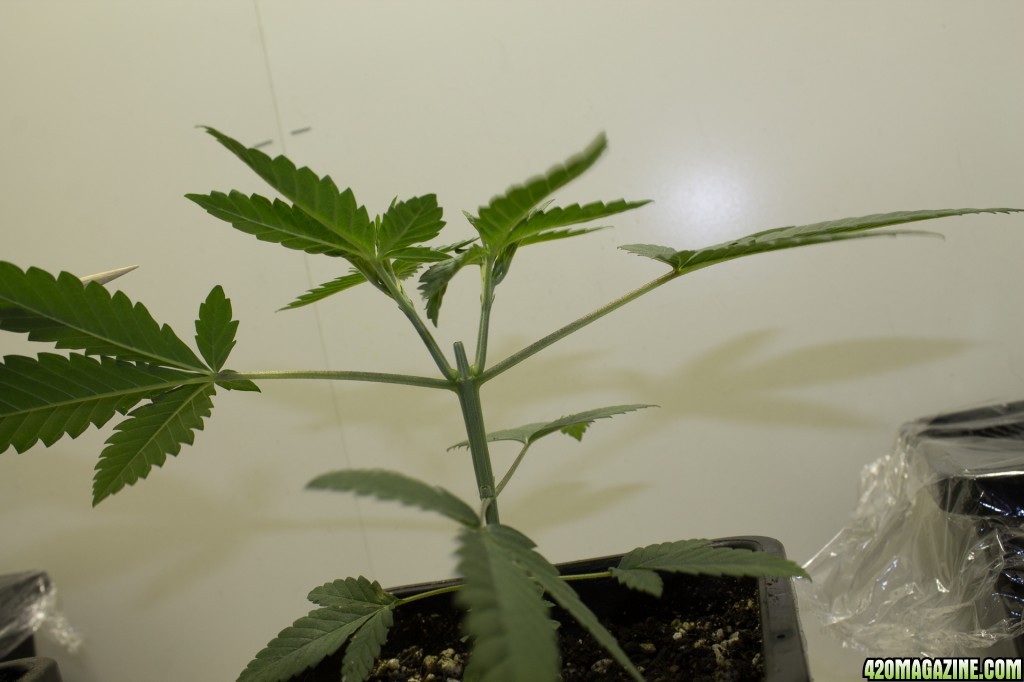 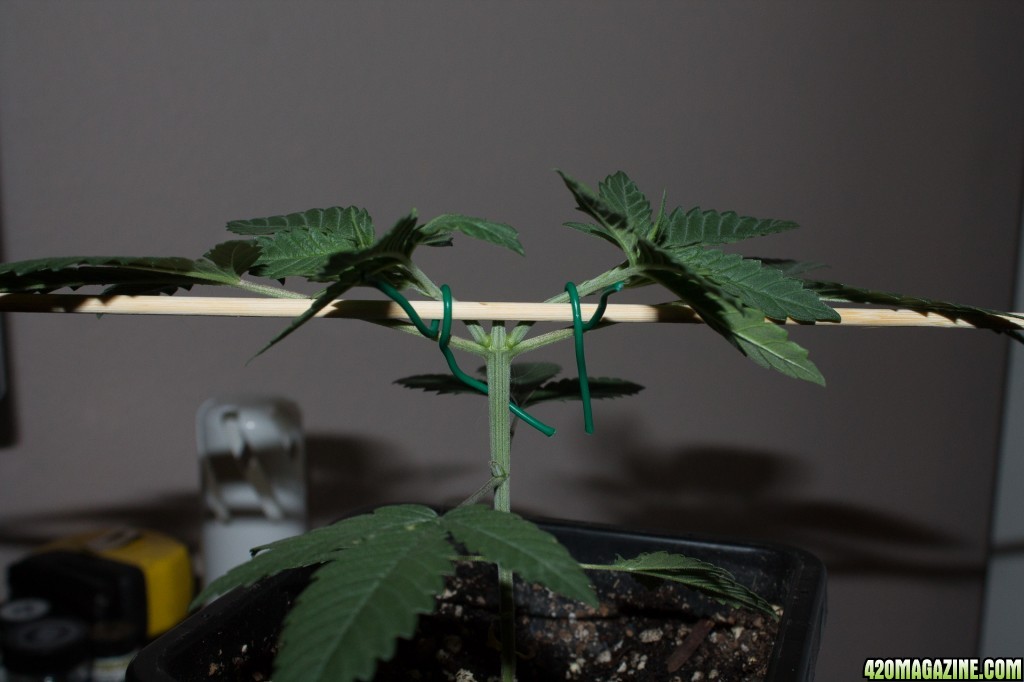 After the training was done on 7/1: 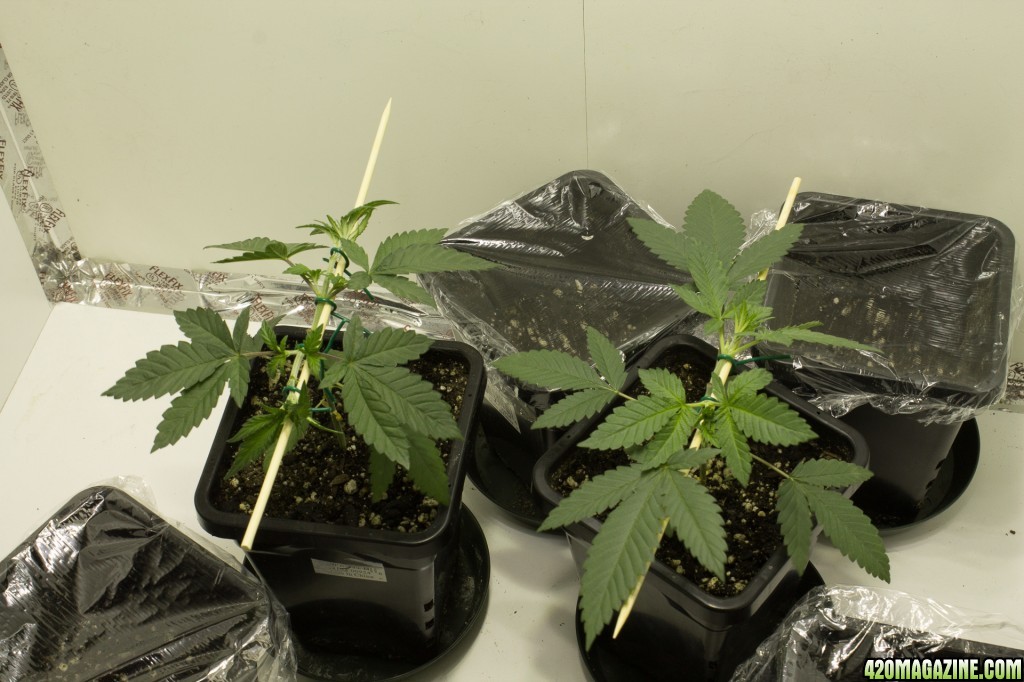 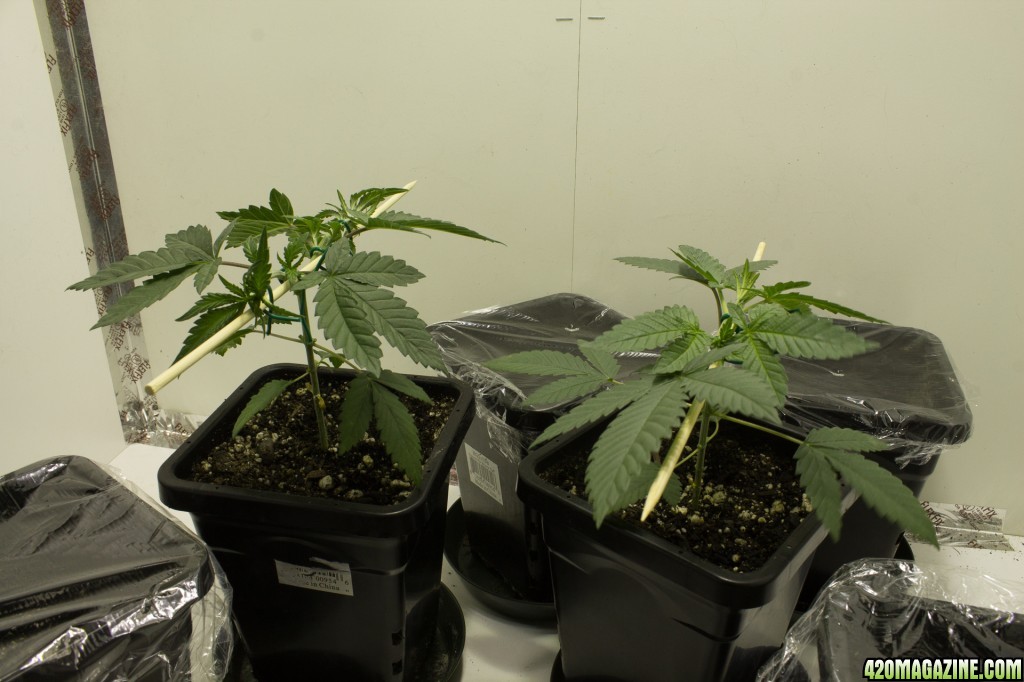 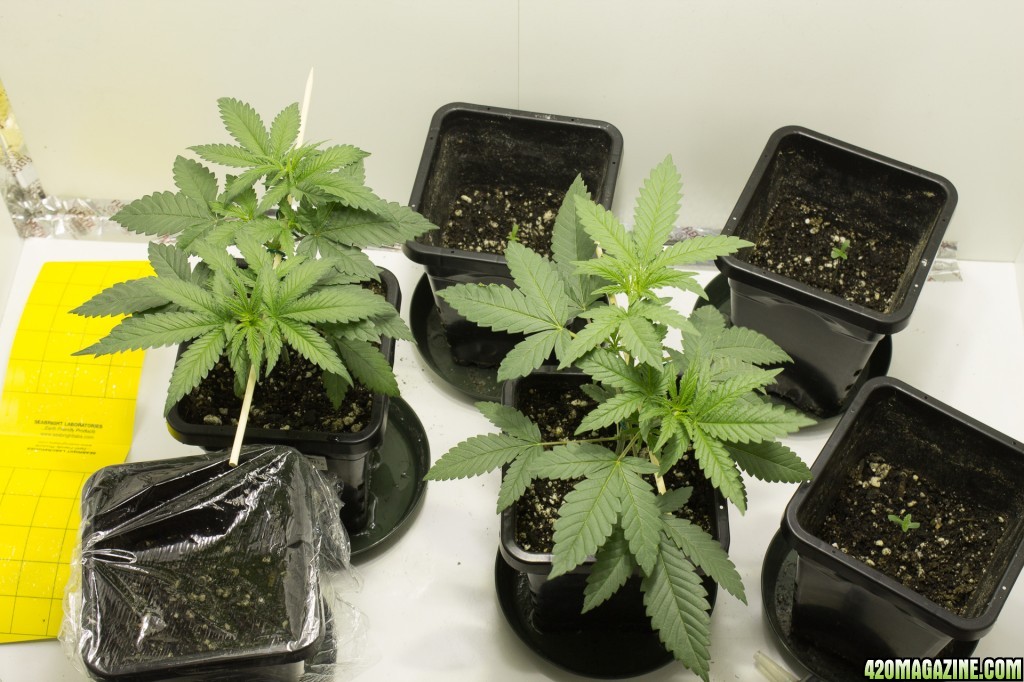 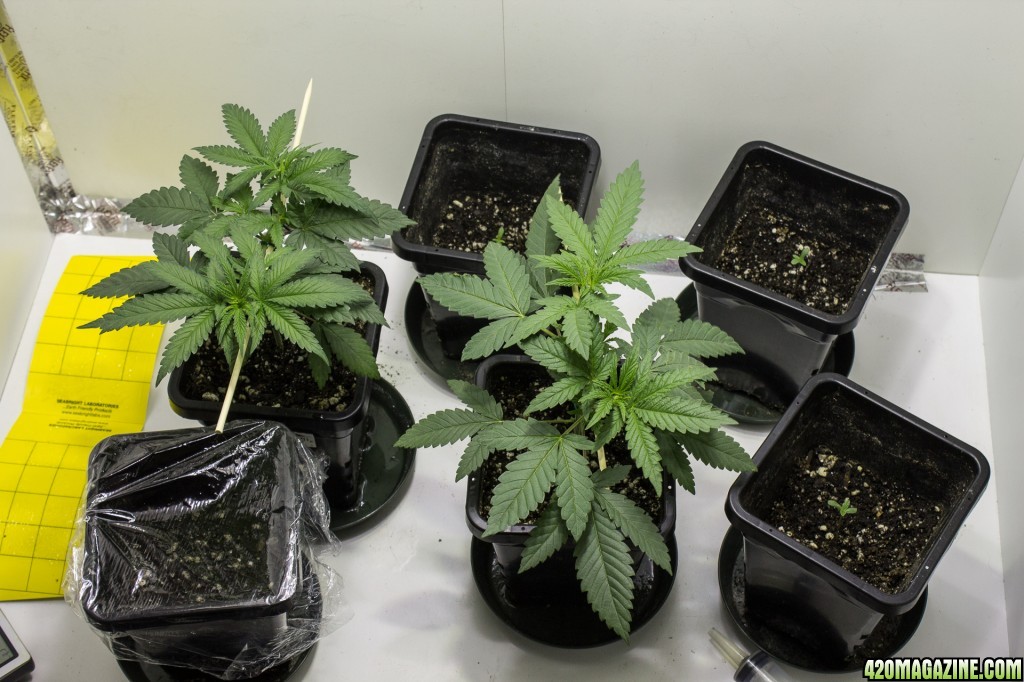 The right sided plant was ready for the second round of training. Once again the vertically oriented shots were removed, second node after the top shoot split. The shoots were then wired to the bamboo to orient them to horizontal growth. 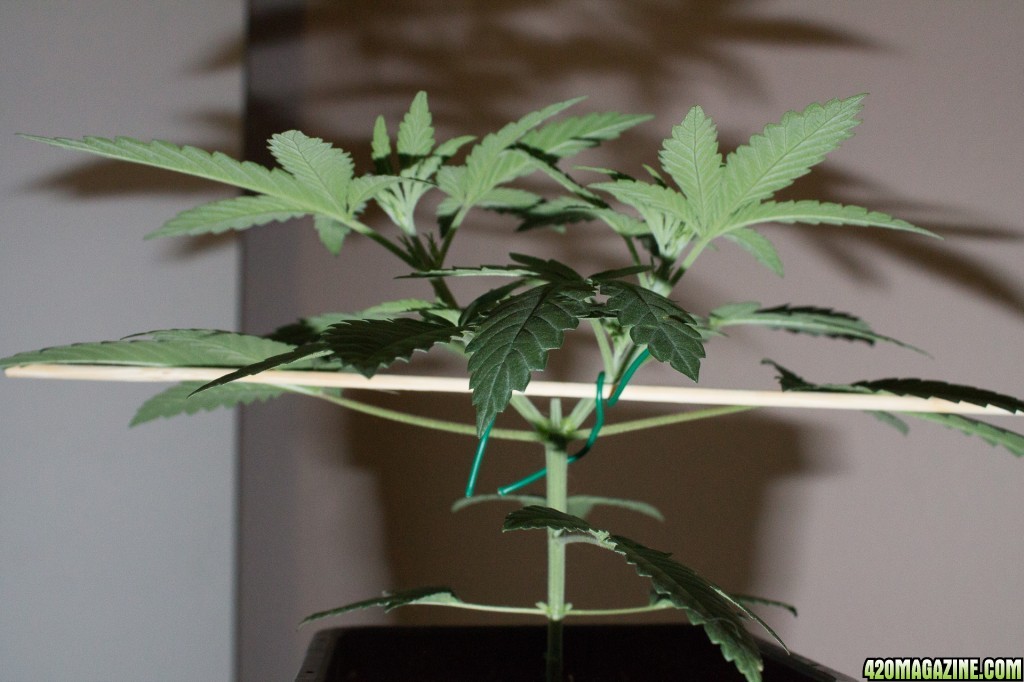 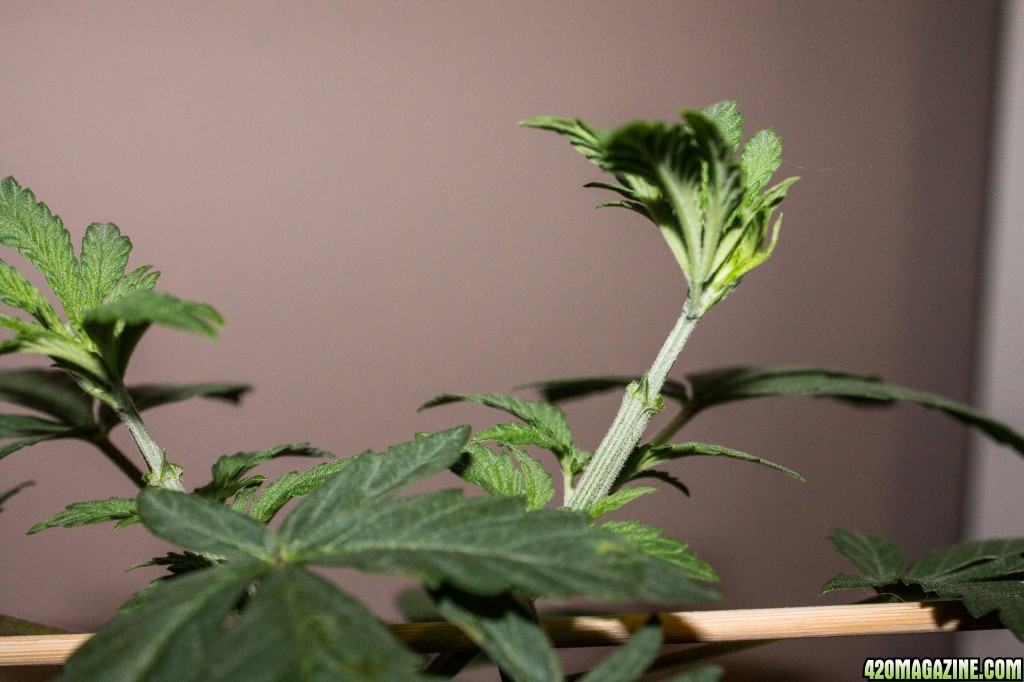 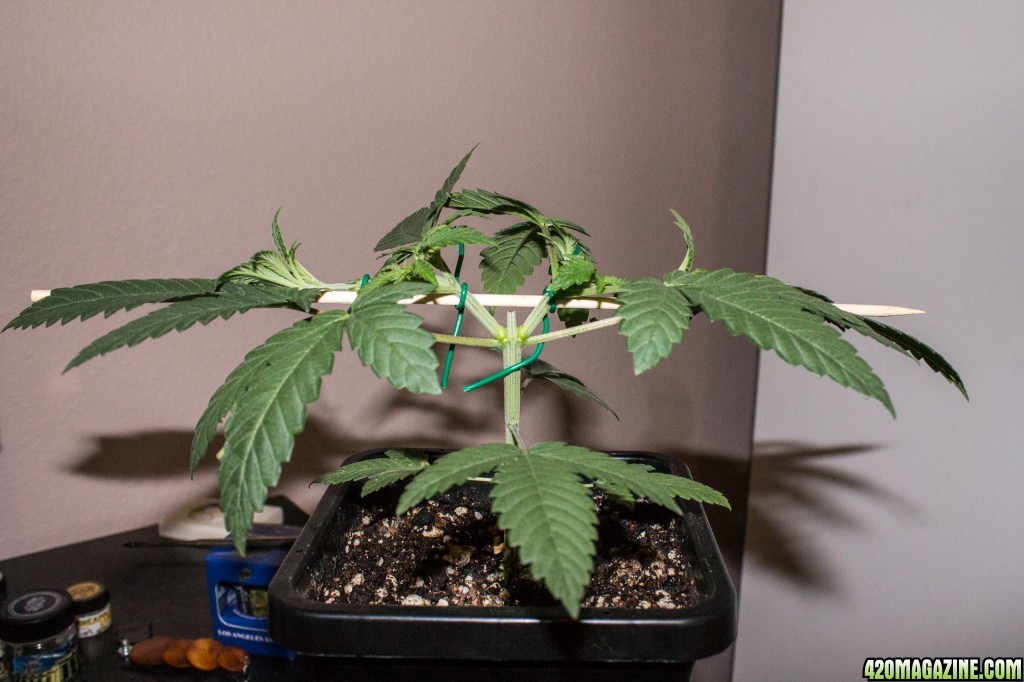 I also adjusted the position of the wires on the left plant to stretch it more horizontally and try to establish a nice hard and horizontal stem. The theory is that horizontal growth like this will eliminate apical dominance and all the shoots will grow with similar vigor. Feel free to ask any questions and I'll answer what I can.
Check out my Grow Jounals​
Grape OG - Feminized - The Cali Connection -in progress​

Check out my journal, girl scout cookies grown in a cabinet - complete​

That's a horizontal stretch technique I haven't seen before, so I'll be here for the rest of it [emoji106]

Thanks for the interest in this technique. I have been experimenting with ways to grow a flux style plant. I never really liked the wires the way light addict runs them. Too hard to get a perfectly even and horizontal stem. I then tried making a frame and using the bamboo as a horizontal trellis of sorts to keep the stems even. That worked well, but was finiky. This technique that i'm trying on this grow is kind of finicky as well and would not be good for anyone with arthritis, or poor dexterity. A frame that clipped onto the pot and was easily adjustable would be awesome, but that would require some serious manufacturing. Anyways, here is an update on the current Grape OG plants in question.

They are growing well following the training.I have adjusted the tightness of some of the binding wires that were cutting into the quickly growing stems. The stems have bounced back and show no signs of slowing down. The smaller plant had one side slightly higher than the other, and apical dominance really showed for that side. That has now been corrected by running a wire from the edge of the container to the side of the skewer that needed to be lowered. Yesterday I did some further training as the side shoots were now working on their third node and growing straight up. Here are before and after photos of the big plant, none of the little one. 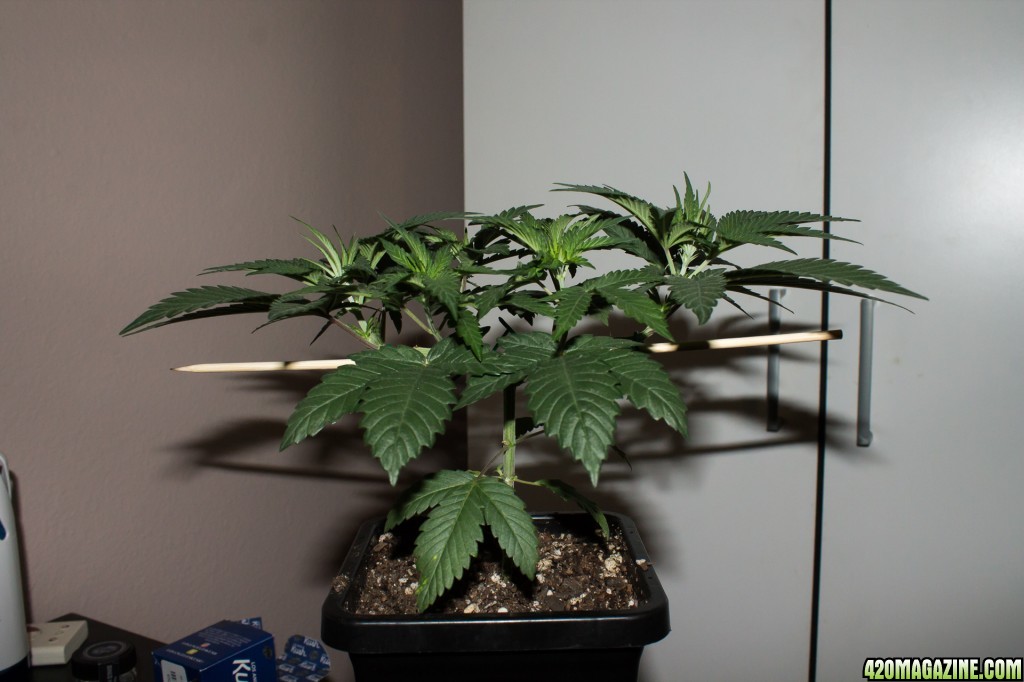 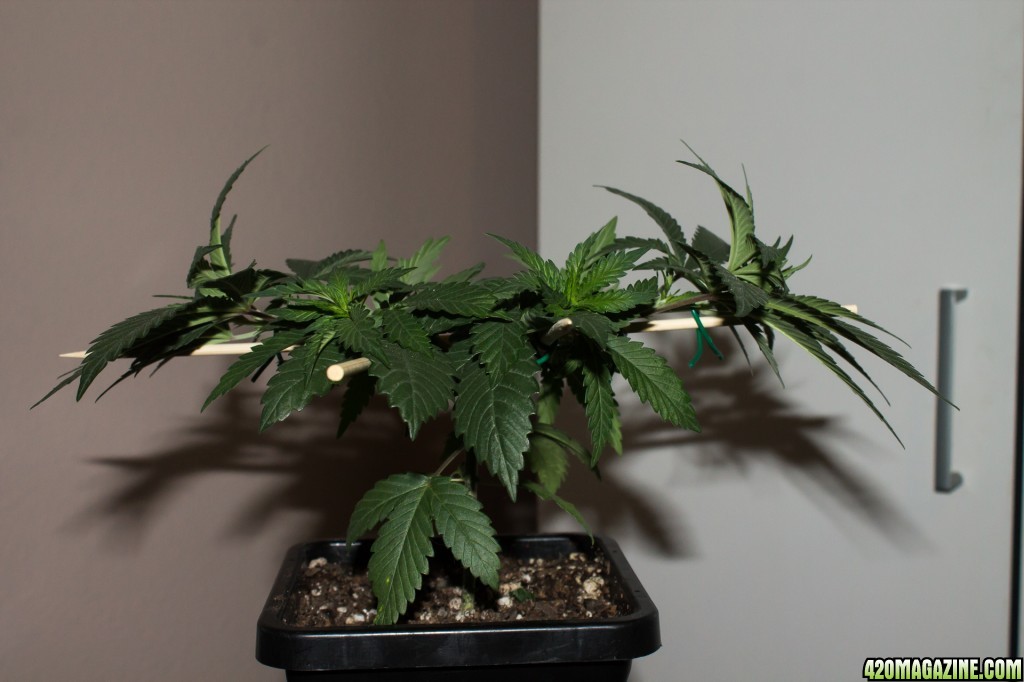 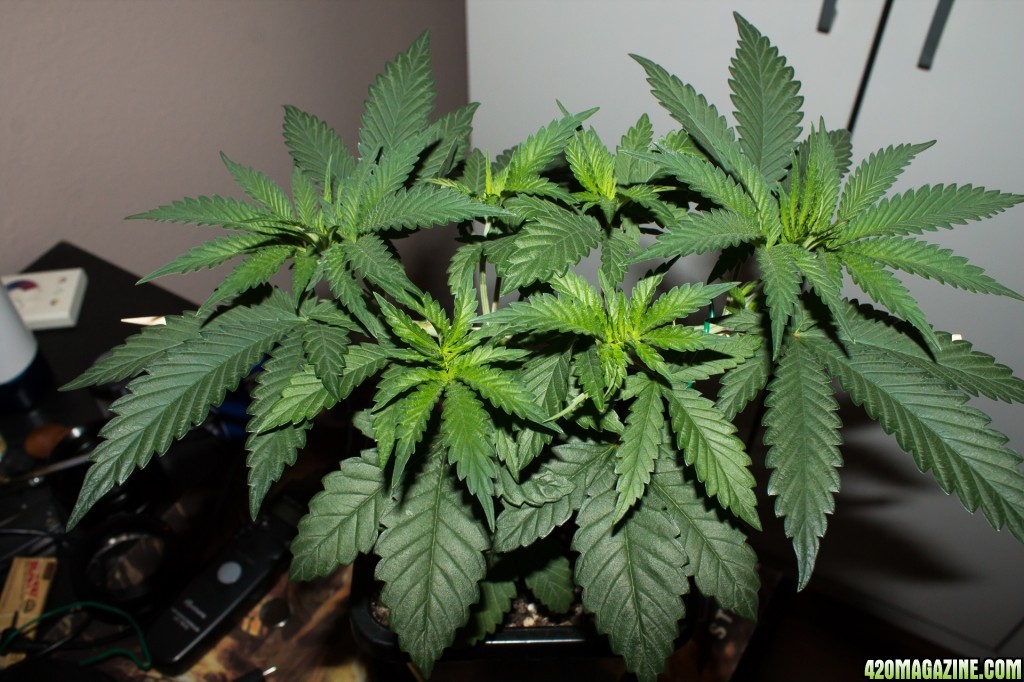 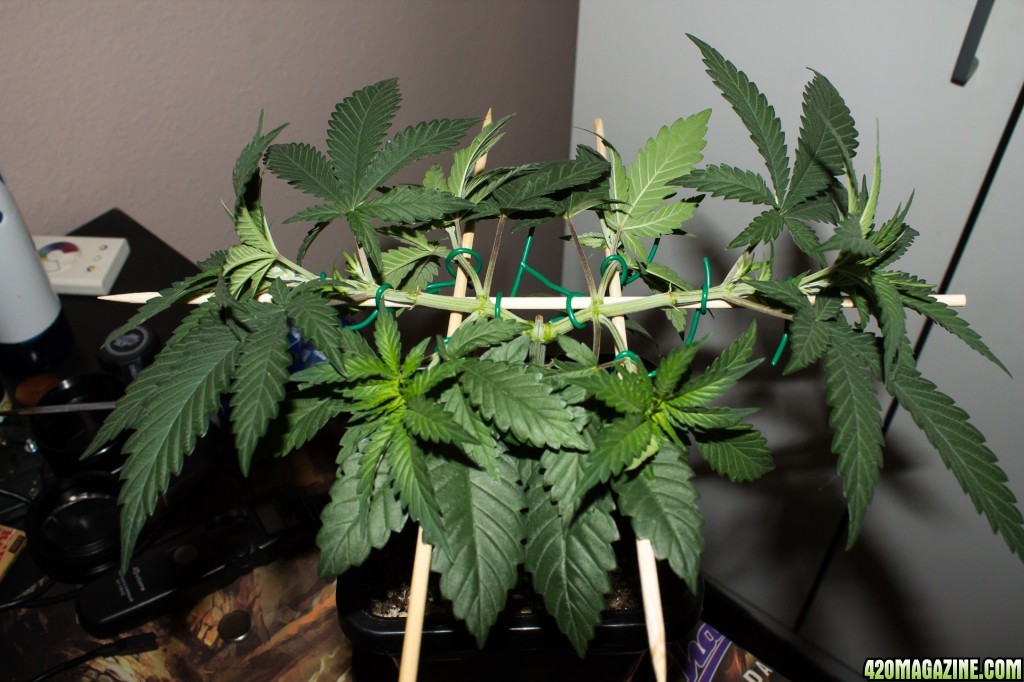 And now, 12 hours later, the shoots are already turning back up. The soil is drying out and will be watered in the "morning" when the lights come back on.
Check out my Grow Jounals​
Grape OG - Feminized - The Cali Connection -in progress​

Check out my journal, girl scout cookies grown in a cabinet - complete​
C

Unique technique! I like how everything's looking, very impressive.
My $.02