On April 29, Ivan Pearce and his wife Adrianne sent a letter to the Washington Department of Health notifying the state agency of their desire to establish a marijuana dispensary called Simply Pure Remedies near their hometown of Moses Lake. "Our intent to open and operate should not be one that is boastful or overbearing to our community," the couple wrote. "But rather should be ran with the utmost respect to the laws that govern our state." The Pearces, along with dozens of other aspiring dispensary owners and marijuana growers from across the state, thought that by alerting the DOH of their plan they were complying with SB 5073, which had been approved by the state legislature a week prior. What they didn't know was that their letter and the personal details it contained would eventually be made public.

On the same day the Pearces dropped their letter in the mail, Gov. Christine Gregoire wielded her veto power and axed the sections of the bill that would have permitted dispensaries and created a confidential registry of marijuana patients and providers. As a result, their letter, which was only supposed to be accessible to DOH and law-enforcement officials, became a matter of public record. Now they and others who believed they were making a good-faith effort to abide by the new state law are concerned that zealous police and prosecutors, or perhaps enterprising criminals, could use that information against them.

"The information in that letter was supposed to be between us and the Department of Health," Ivan Pearce tells Seattle Weekly. "It shouldn't be public. If [the bill, SB 5073] went down, I figured everything we sent in would be destroyed."

Pearce, who is authorized to use medical marijuana because of a debilitating back injury suffered as a result of a car accident on I-90, says he and his wife spent several hundred dollars scouting locations for their dispensary and paying fees to register their bud business with the Washington Secretary of State. He was excited about the prospect of opening a dispensary in a rural area where safe access to quality medical pot can be hard to come by.

"We planned on making it a 100-percent-legitimate business, only helping those that needed to be helped," Pearce says. "I was really hoping it would pass. Now it's back where it was before: You can have it, you can use it, you just can't get it anywhere."

Donn Moyer, spokesman for the DOH, says Pearce and others were under the mistaken impression that the pre-veto version of SB 5073 required them to formally notify the DOH before May 1, 2011 in order to qualify as a dispensary owner under the new law. "There was some misunderstanding that they had to get it in by a certain time," Moyer says. "There never was anything for us to do with those letters. There never was a place to take them and a thing to do with them. It was unfortunate that those people thought they were doing what the law asked them to do."

The confusion stems from two separate sections of the version of SB 5073 that was approved by the legislature. In one instance, the law would've required the DOH to establish "a registration system" to keep track of marijuana patients and providers. The system would have been implemented no later than January 1, 2013, and would have used the "current best differential privacy practices" to ensure the data would not be compromised. Access to the registry would have been limited to officials from the DOH, the Department of Agriculture, and state law enforcement. The outdated version of the bill explicitly stated that the info would be "exempt from disclosure" to the general public.

Elsewhere in the pre-veto bill, in section 1201, the lawmakers acknowledged that numerous individuals across the state were (and still are) already growing and selling pot for medicinal purposes. "These producers and dispensary owners and operators run the risk of arrest between the effective date of this section and the time they become licensed," the bill reads. "Therefore, the legislature intends to provide them with an affirmative defense." The pot producers, the lawmakers decided, would be in the clear if they had registered with the Secretary of State by May 1, 2011, and also filed "a letter of intent" with the DOH and their city clerk.

Shane Silverthorn, an attorney in Port Orchard who represents more than a dozen individuals who sent letters of intent to the DOH, says he was under the impression that the state would only authorize a finite number of dispensaries. Several of his clients, he says, wanted to be first in line for what stood to be a lucrative business opportunity.

"There were multiple interpretations as to what was required," Silverthorn says. "It was clear the licenses would be limited, and so people had to act. You could just plan to buy a license. The license itself could be valuable whether you did anything with it or not."

But when Gregoire nixed both of those two key sections from the bill, the letters and any attempt to register with the state became moot. Moyer, the DOH spokesman, says that even if the Governor had approved the law without making any changes, the letters that had been sent in prior to the bill's passage would have been invalid.

According to Moyer, the DOH received 71 letters from individuals who hoped to open dispensaries or legally grow weed. After the Governor's veto, he says, "there was nothing we could do, so those letters just go into a file." Those who contacted the DOH received a reply notifying them of the last-minute changes to the marijuana law, and explaining that the agency was "required to retain your letter and that it may be discloseable under the Public Records Act."

"Any document that comes to an agency is public record," Moyer tells Seattle Weekly. "The law requires that we retain records. We can't willy-nilly destroy them. That'd be against the law."

Two would-be Seattle-area dispensary owners who sent letters to the DOH were unaware that their information--including their addresses and cell-phone numbers--had been made public until they were contacted by Seattle Weekly.

"That sucks," said one of the men, who asked that his name be withheld because his neighbors might frown on his involvement with the pot trade. "It said in the bill that that information would not be public record. The Governor really kind of screwed everything up. Now it's just harder to get [marijuana], but everybody knows already knows how to get it anyway, so why not make it legal?"

Seattle dispensary owner and medical-pot activist Steve Sarich alerted Seattle Weekly to the fact that the letters of intent received by DOH are now public records, and handed over copies of the letters he had obtained from the state. Sarich says he didn't send a letter himself for fear of this exact scenario.

"This is why we'll never trust the state on issues of confidentially," Sarich says. "They kind of make up their own rules. We have not had very good treatment from Department of Health. As long as they've been involved with medical marijuana, they've very often made decisions behind closed doors."

Sarich is concerned that the now-public documents could be used for nefarious purposes. "Certainly a lot of marijuana growers have been robbed," he says. "If I'm a bad guy, I now have quite a list of addresses where people are growing medical marijuana."

But in eastern Washington, Pearce and others fear that because of the letters, the cops might come calling before the crooks, just as they did in Spokane, where Pearce used to legally replenish his pot supply before the DEA shut down most of the city's dispensaries with the help of local law enforcement.

"I'm not doing anything, they can come look, but there's no businesses like that here," Pearce says of his aborted pot-peddling endeavor. "That's something I wanted to do. And if the state would ever, excuse the expression, pull their head out their ass, of course I would like to do it again." 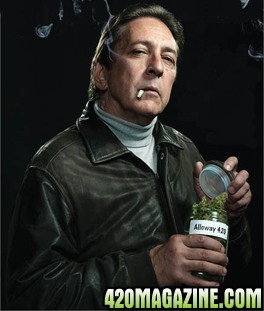