Organized crime is back in business in Griffith as the mafia returns to its traditional ''grass-roots'' operation in the Riverina district.

More than 30 years after the contract killing of Griffith anti-drugs campaigner Donald Mackay, police have finished a two-week swoop on the area, netting $23 million worth of marijuana hidden in three vineyards and an orange orchard.

''Organised crime is back in business here but we have put a major dent in their operation and will continue to do so,'' the local area commander of the Griffith police, Detective Superintendent Michael Rowan, told The Sun-Herald.

The scale of the crops showed the mafia was behind the operation, Superintendent Rowan said. ''There is organised crime behind it. Clearly it has got to be destined for the Sydney and Melbourne markets.''

The police attention that surrounded the 1977 killing of Mackay, a Griffith businessman whose body was never found, forced the local branch of the Calabrian mafia syndicate known as Ndrangheta (the Honoured Society) to move its marijuana-growing operations far afield to areas such as Bungandore, north-east of Canberra, and Cobar, north-west of Dubbo.

It was Mackay's covert information on the whereabouts of major marijuana crops that made him a target, particularly his disclosure to police in November 1975 of a then Australian record crop worth more than $100 million at today's prices. It was found at Tharbogang, where police found another big crop of marijuana plants in last month's operation with the aid of helicopters, Superintendent Rowan said.

Police found 10,447 cannabis plants and 917 cut plants with an estimated value of $23 million in a five-day operation targeting farms, vineyards and other properties at Tharbogang, Bilbul, Nericon, Hillston and Coleambally, all within 60 kilometres of Griffith. ''A number of cannabis crops were located growing within grapevines at a number of vineyards and amongst orange orchards in an attempt to disguise the presence of the crops," Superintendent Rowan said.

The seized cannabis was destroyed by fire.

Police seized 14 kilograms of cannabis leaf, one kilogram of cannabis seeds, seven firearms, including a .357 Magnum pistol, and ammunition. Also involved in the operation were members of the Dog Squad, Southern Region Operational Support Group and detectives from the Drug Squad and the Firearms and Organised Crime Squad. 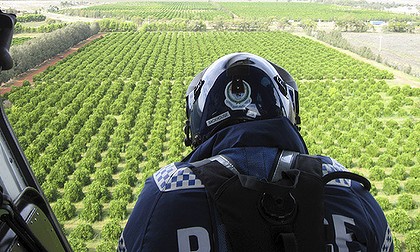 Large haul ... aerial police survey an orange orchard, one of four sites near Griffith
in which marijuana crops were found hidden among the vegetation. Photo: NSW Police 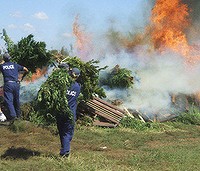 Police To Use 'Mafia' Law In Cannabis Cases

AK: Thinking About Moonlighting In Marijuana? You Can't If You're A Cop