Hey everyone! This is my very first grow and I know I have too much going on. I'll get to that in a minute, but first here are some details:

These are all being grown indoors.

Dakini Kush was started from seed in 5" pots with ProMix HP.
Orange and Euphoria Kush were received as clones in rockwool, but will also be in soil eventually.

Eventually they will all be in 3 gallon smart pots in ProMix HP.

I have a 1Kw HPS light with a Phantom PHE1THD Ballast.

This is being done in my basement, and the temp is about 75-80F

I don't know RH, but will be getting a meter.

So the original plan was to start only with clones. The first source went sour. The second source was still on track, but kept getting pushed back. I finally gave up and bought the Dakini Kush seeds. Shortly after, the clones showed up. I got 5 Euphoria Kush, 6 Orange and 1 larger mystery clone. This mystery strain was well established and is currently in a 3 gallon smart pot. 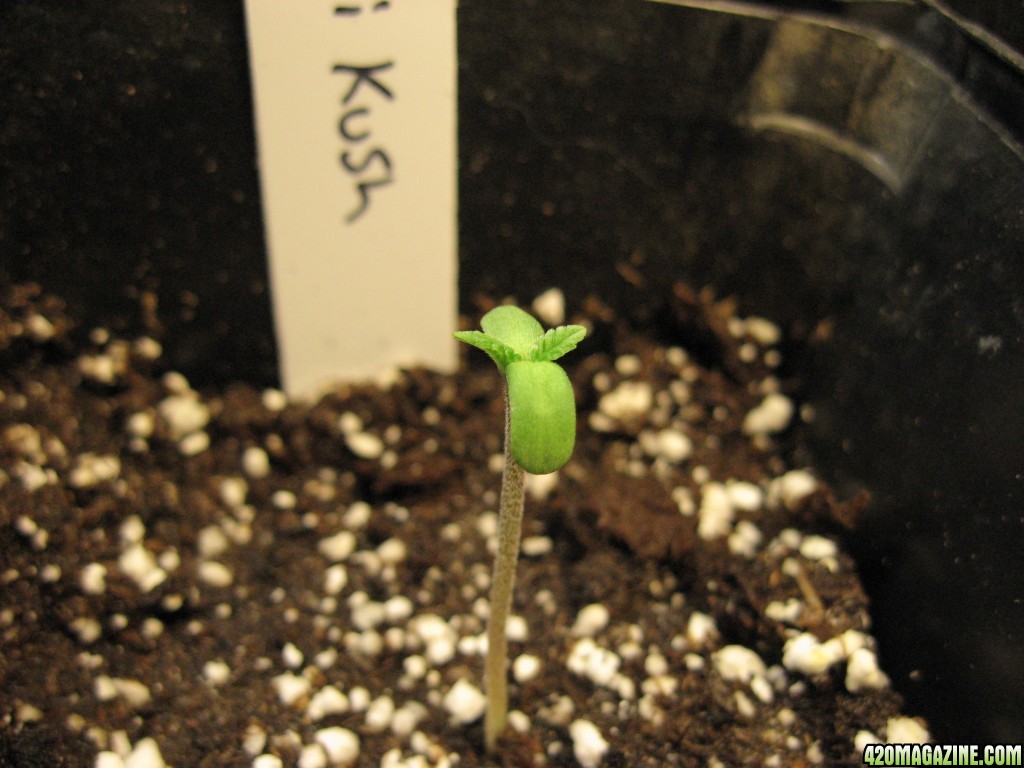 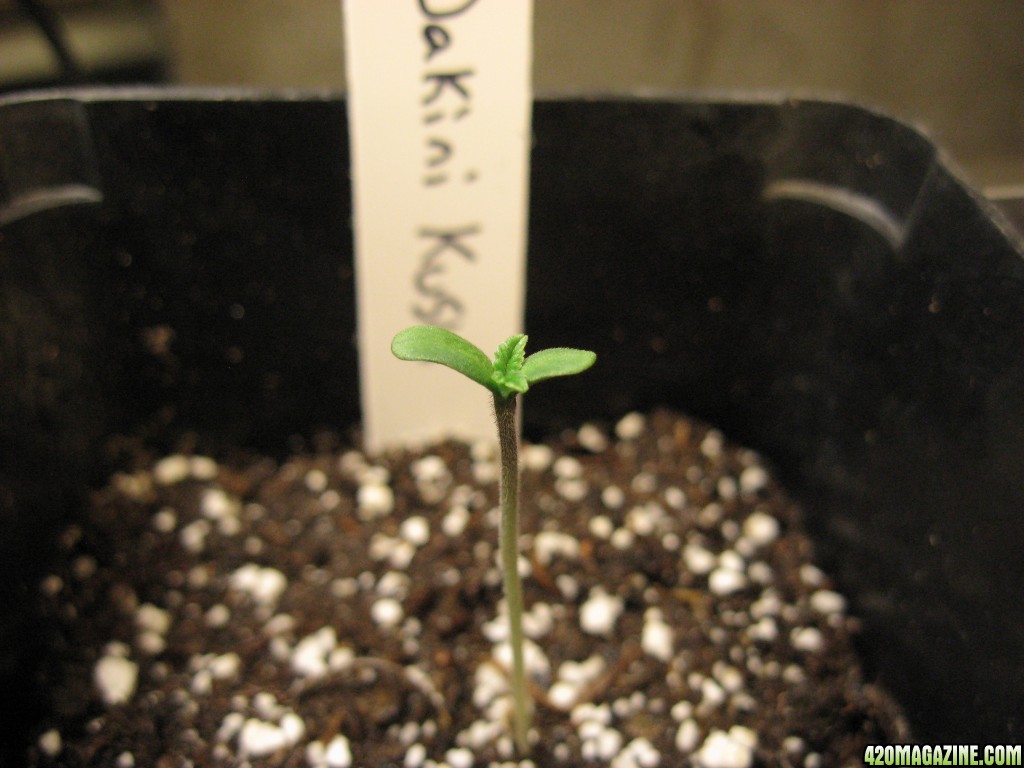 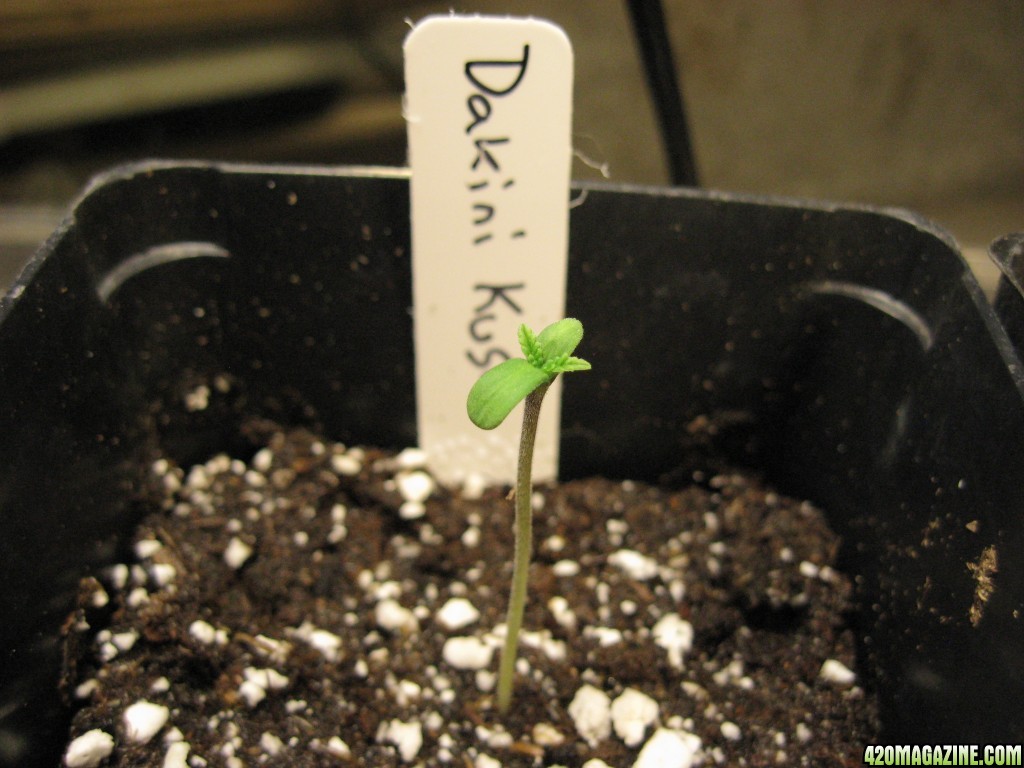 And here are a few photos of them today: 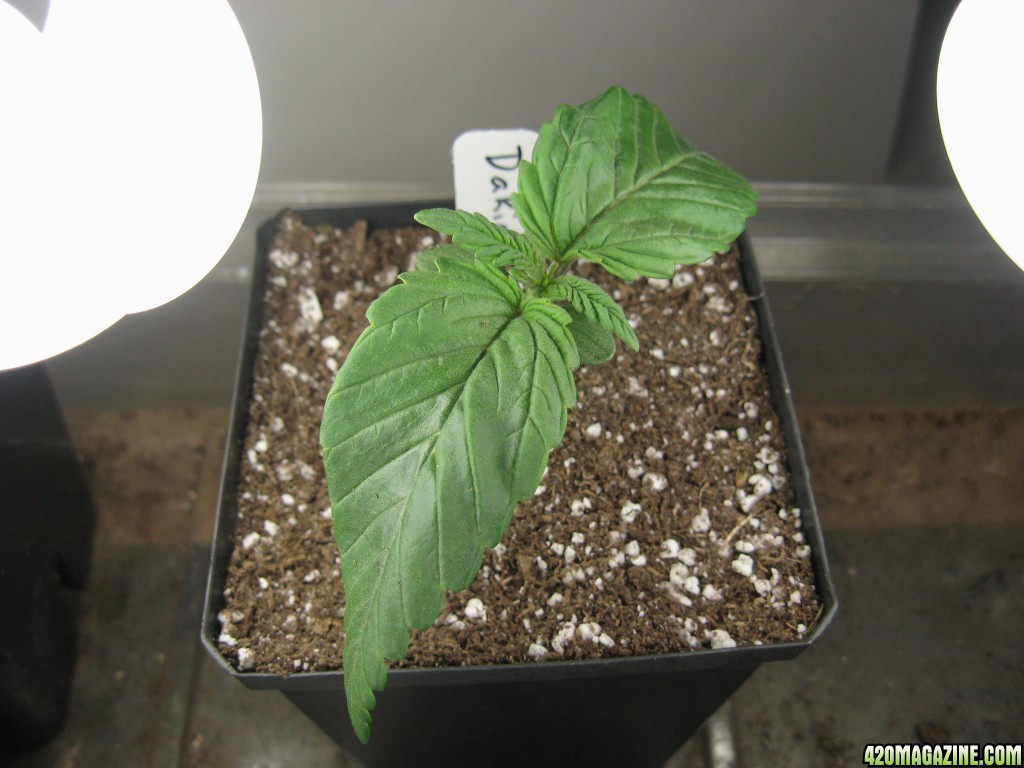 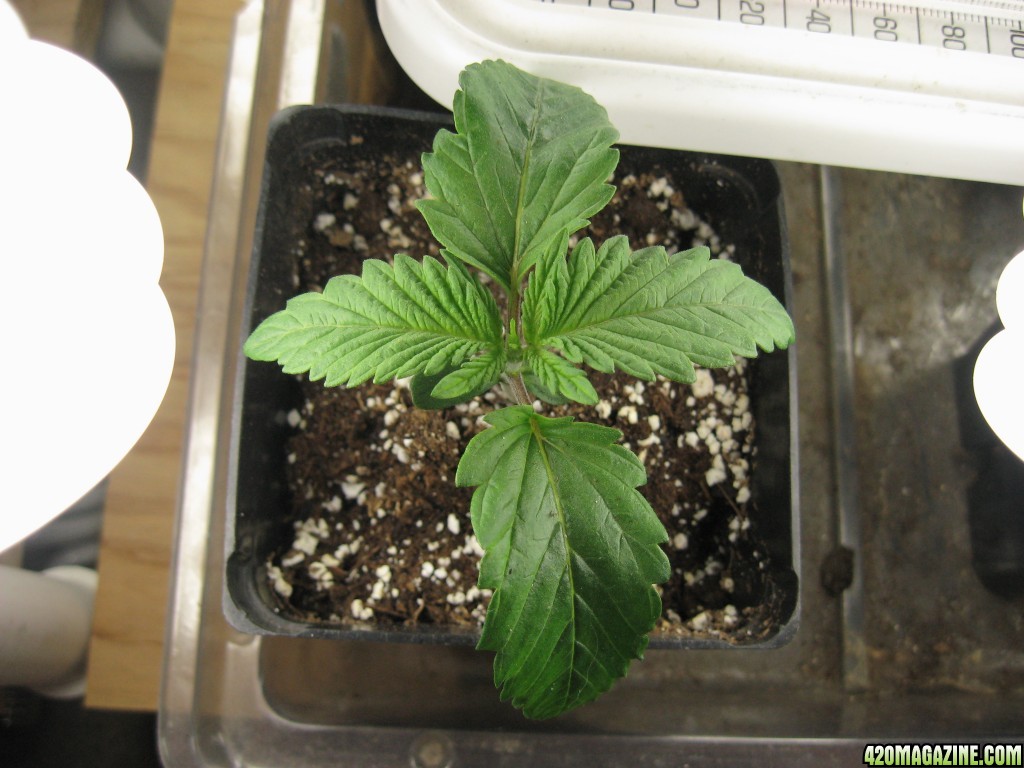 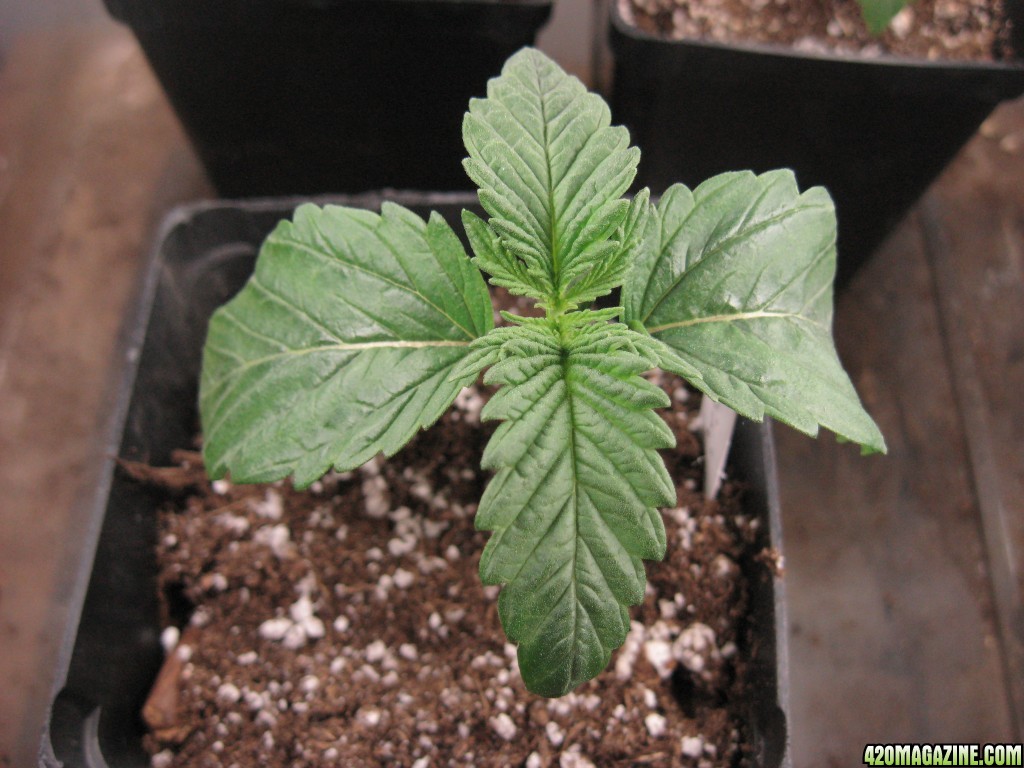 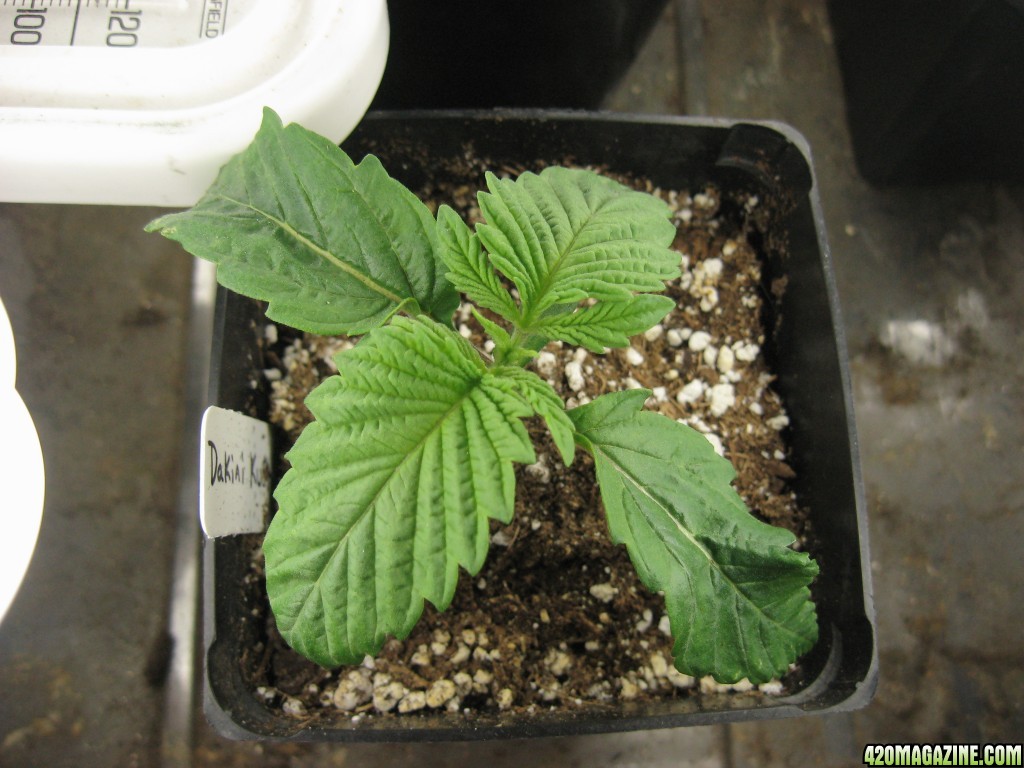 The seedlings seem to be doing well. If you notice in the last picture, one of the secondary leaves has a bit of a kink in it. This developed very early, and I'm not sure why. It doesn't seem to have an adverse effect though. These plants are growing under 8, 23w 5000k CFL's.

This is one of the clones I received. I have no idea what it is, since it arrived unmarked. It was about half this size. It's been under the 1Kw HPS light since it showed up for 24 hours on. I water it when the first inch or so of soil feels dry...this is about every three days. Plain water: 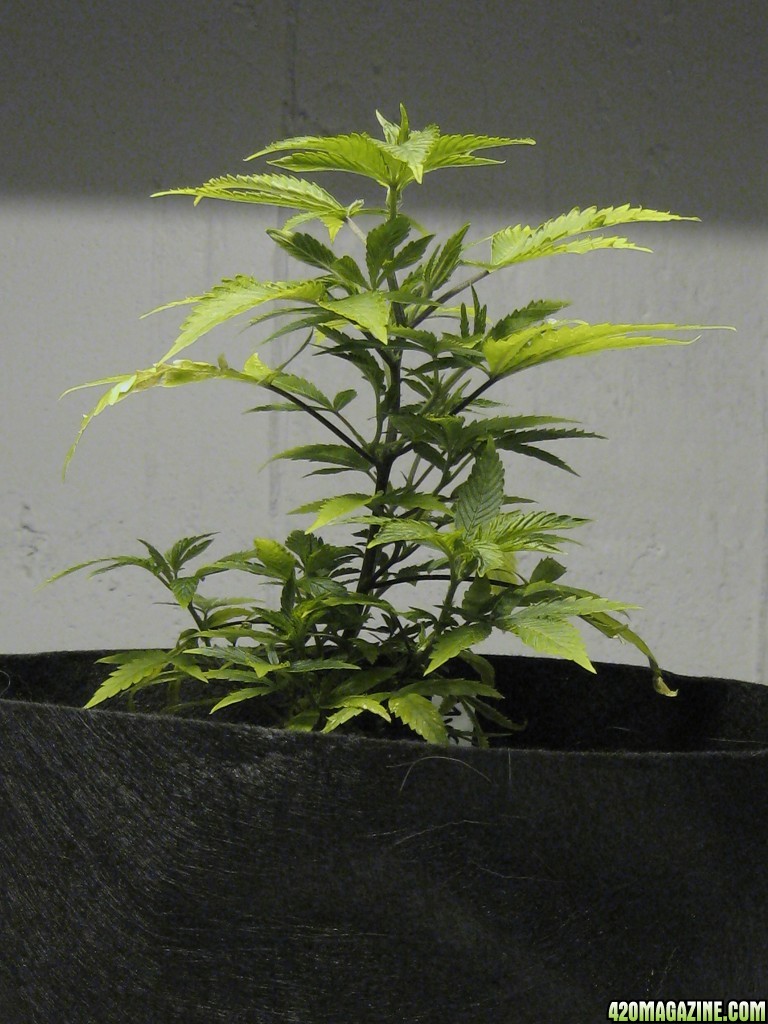 It has sprouted a lot of new growth since it arrived, but I noticed some discoloration today. Also some leaf curling at the edges: 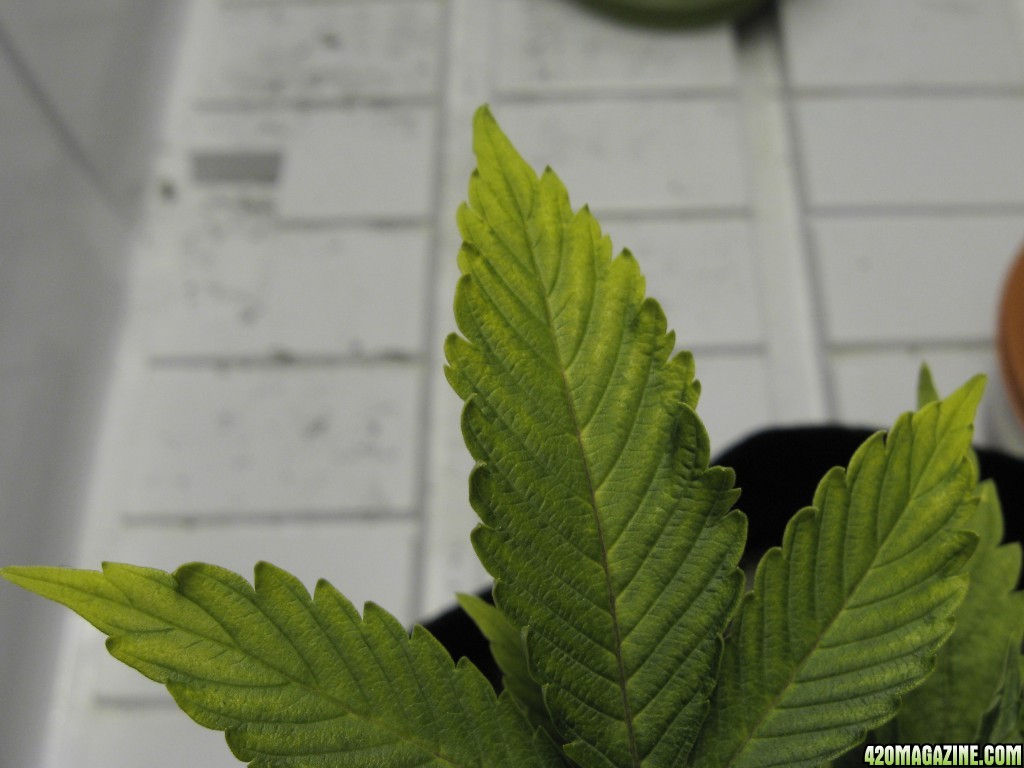 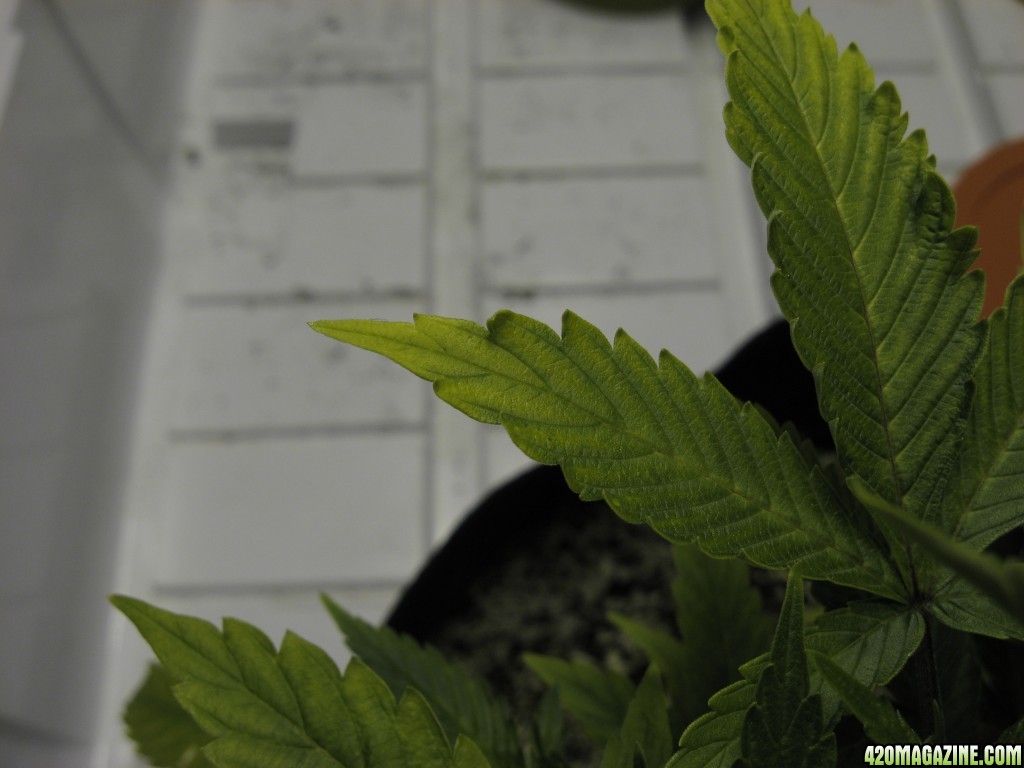 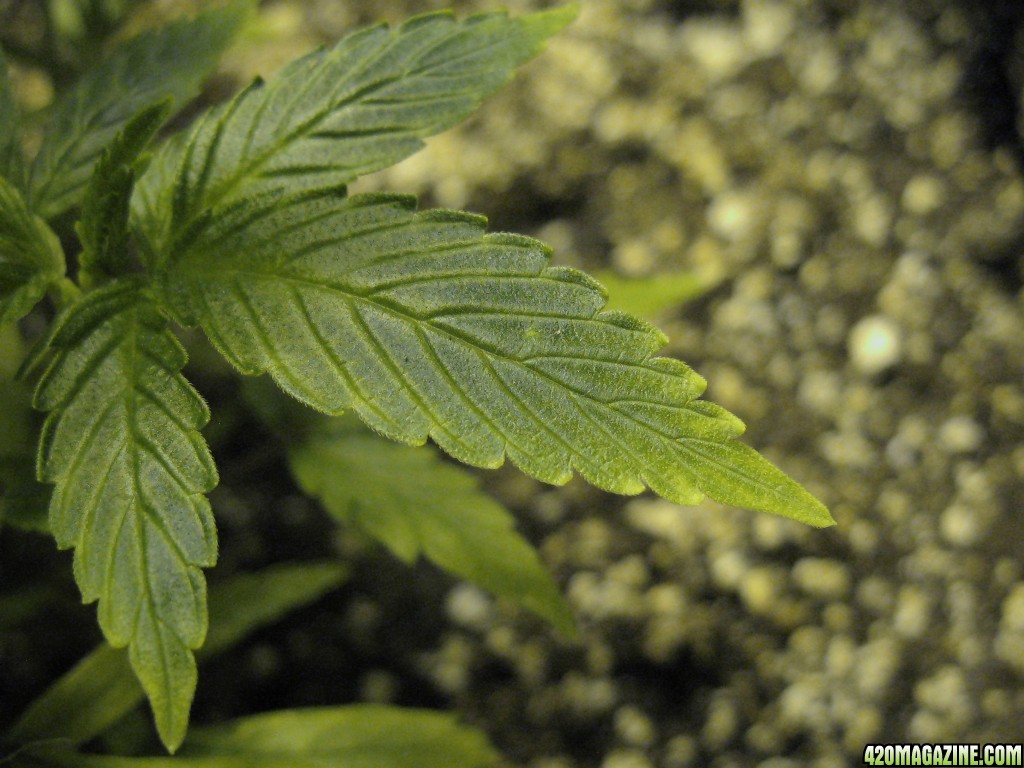 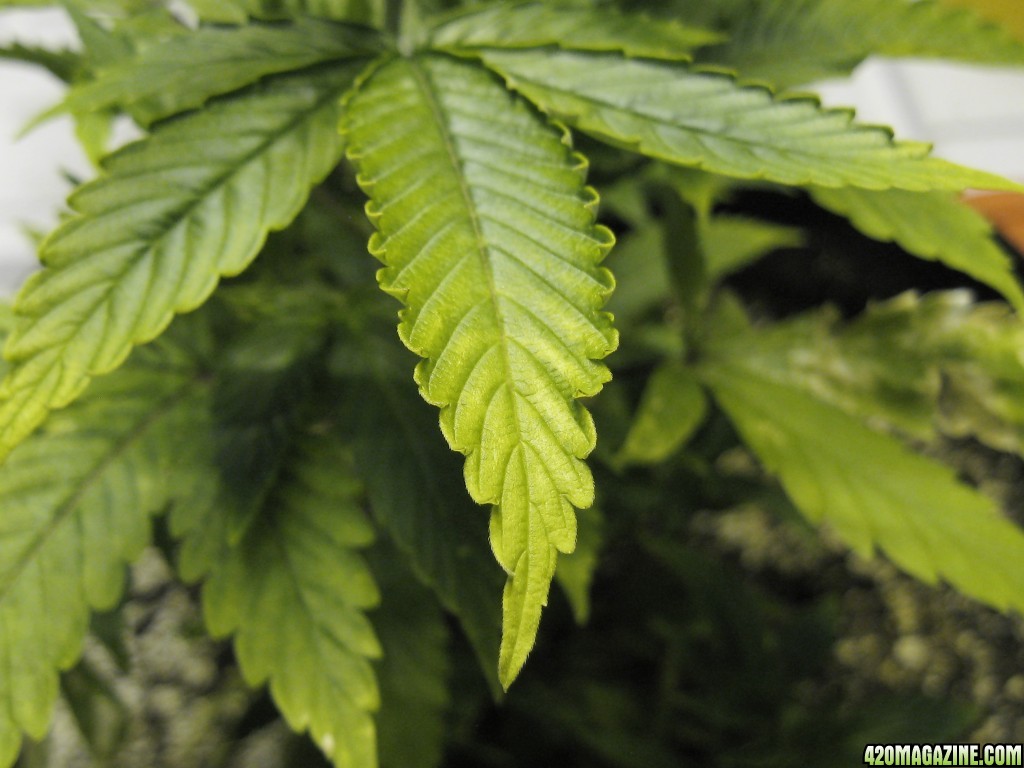 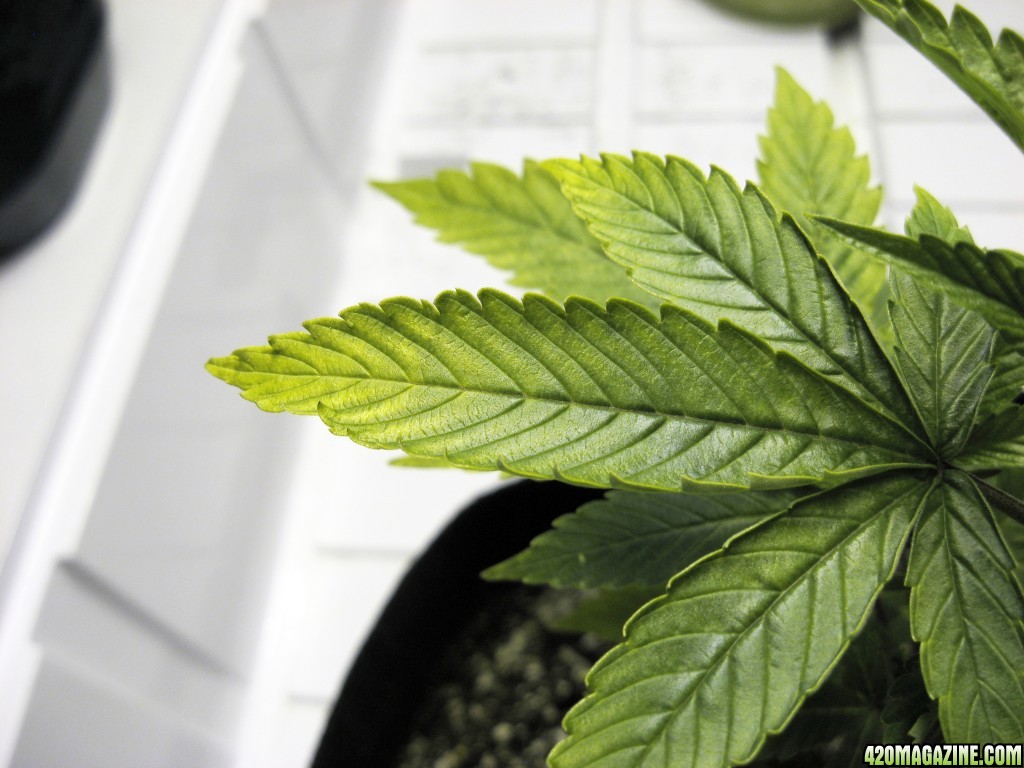 I don't think I'm over watering, but I very well could be. I'm going to let it dry out some more before I water it again. Any thoughts would be greatly appreciated.

Nice start to your grow so far. Kudos! The curling of the leaf edges on the mystery clone looks like the start of heat stress. The fading could be a little light bleaching or signs of a nute deficiency. She could be getting hungry. My initial thoughts of things to consider:


I'm just shooting from the hip here. Let's see if we can get some additional combined knowledge in here to keep the girls on track

Thanks for the feedback Obi Wan! I have a few friends who used to grow, but both have said it's been about 15 years. They have admitted things have come a long way and I agree I can use all the input possible.

Late last night I was also contemplating a cutback on the light time. I thought the curling could be too much light or heat or both. I measured the temp at the top of the plant and it seemed high at upper 80. I raised the light 6" to a total of 18".

The nutes I have were originally purchased for Hydroponics, but my girlfriend decided to go with soil, so these won't work. I have one friend bringing soil compatible nutes over tomorrow, and if he doesn't I plan to buy them. I agree it's probably hungry since it's been on nothing but water for the past two weeks.

I really need to introduce a fan to the system. It's all open and free flowing, but I agree it could use some airflow.

The good news is that she doesn't look worse...just the same. Hopefully the light height helps: 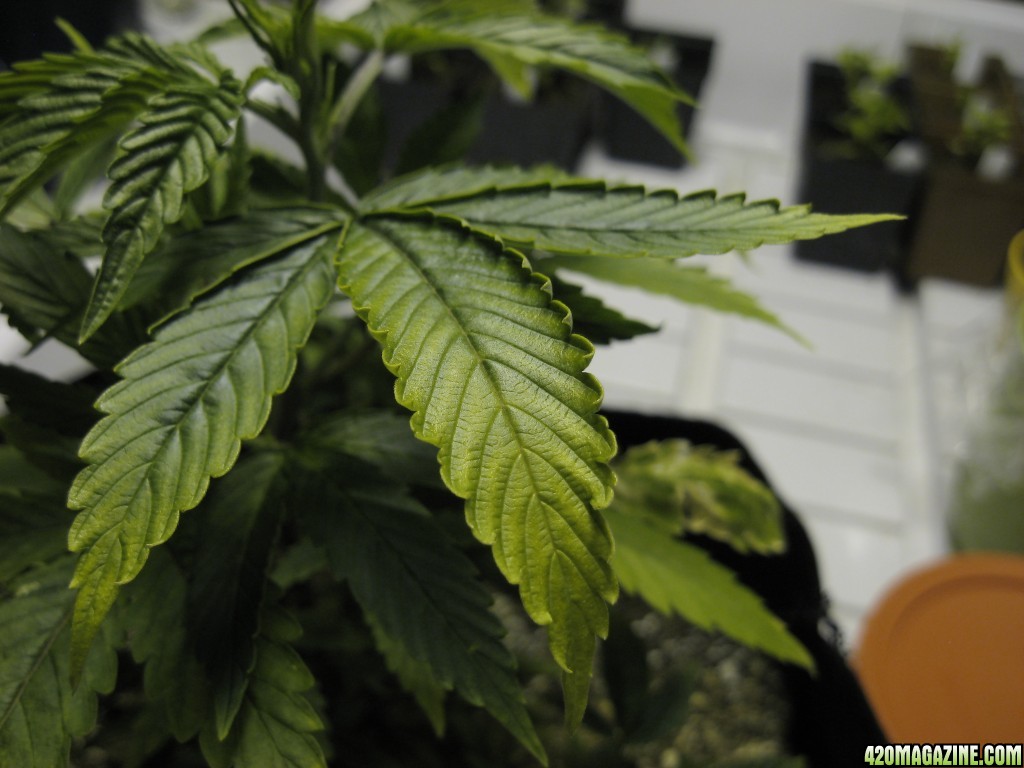 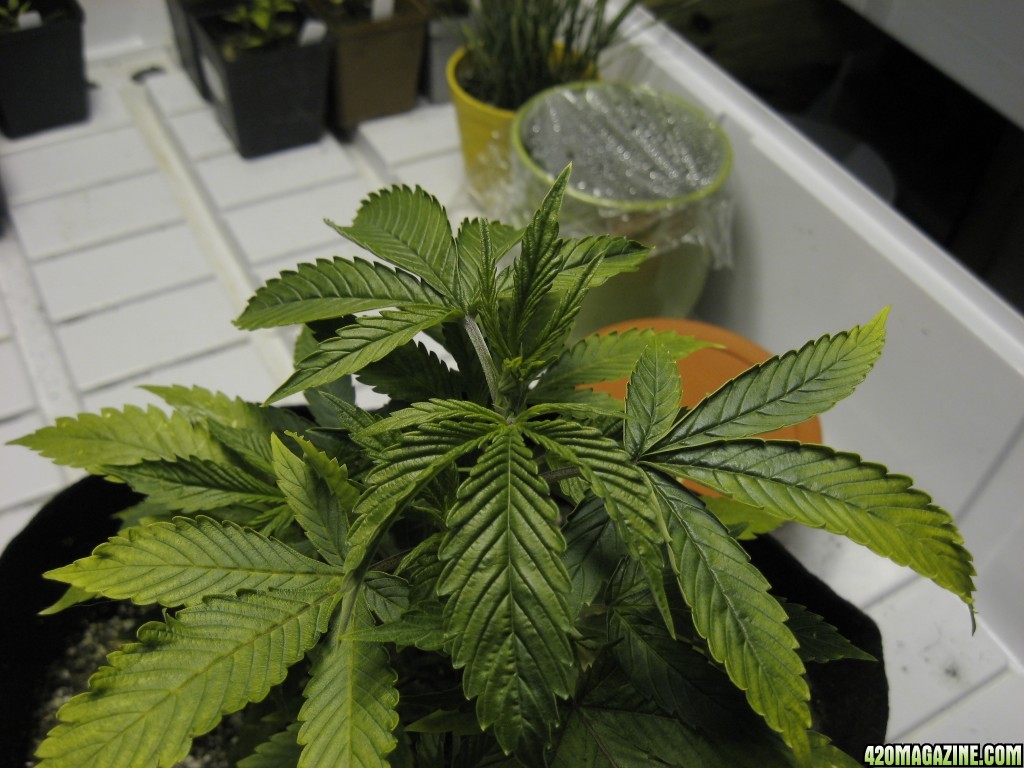 Now for the ugly. Keep in mind, I know nothing about clones or rockwool...if you have suggestions, let them fly. I have pretty thick skin and take no offense to criticism.

I received these on 04-06-14. They were given to me by a very generous member of the community, and I am determined to not let him down. These clones looked much better when I got them, but the new growth came up in the last few weeks, so I have hope. The wool was soaking wet when I got them and I left them under cover. 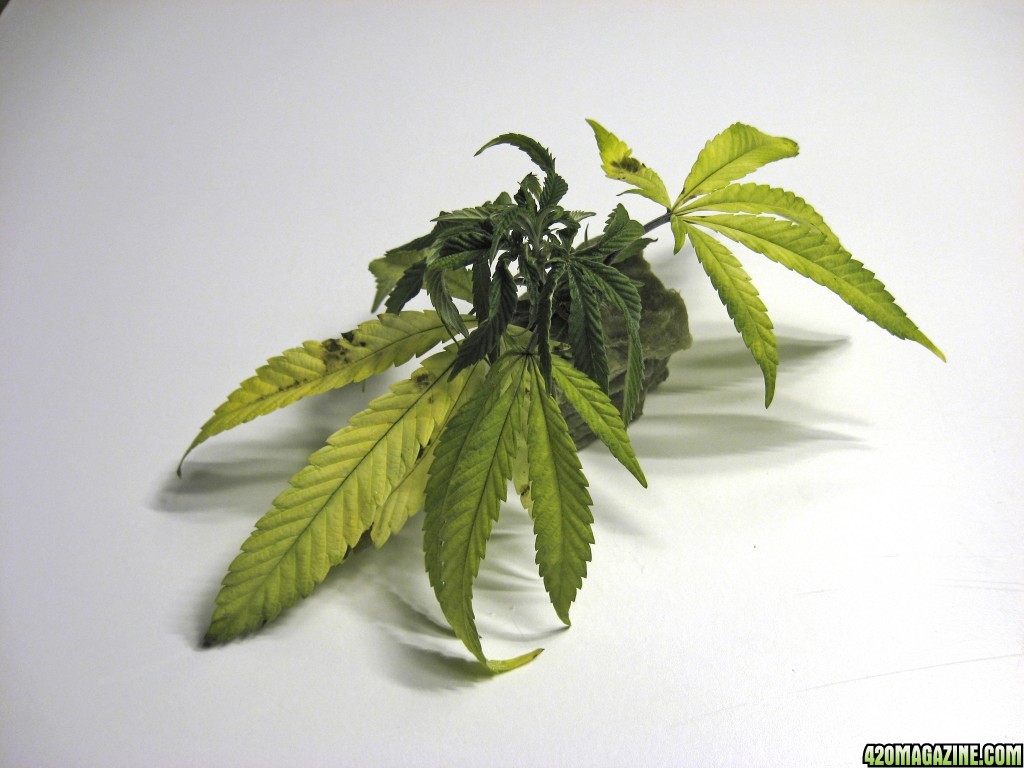 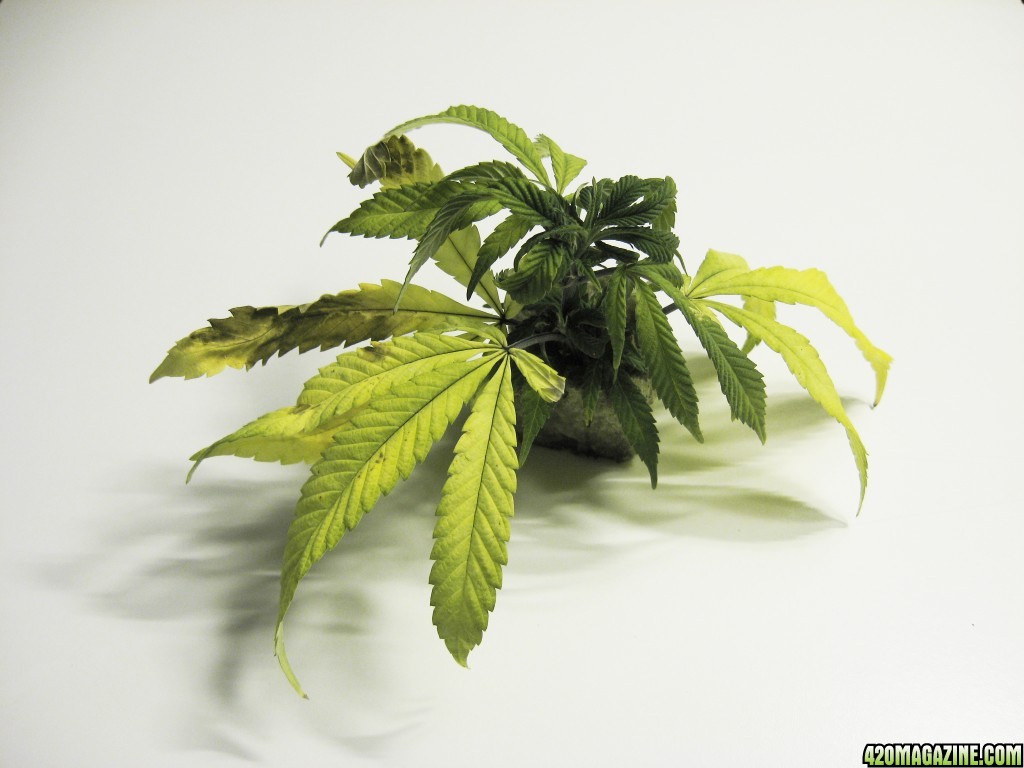 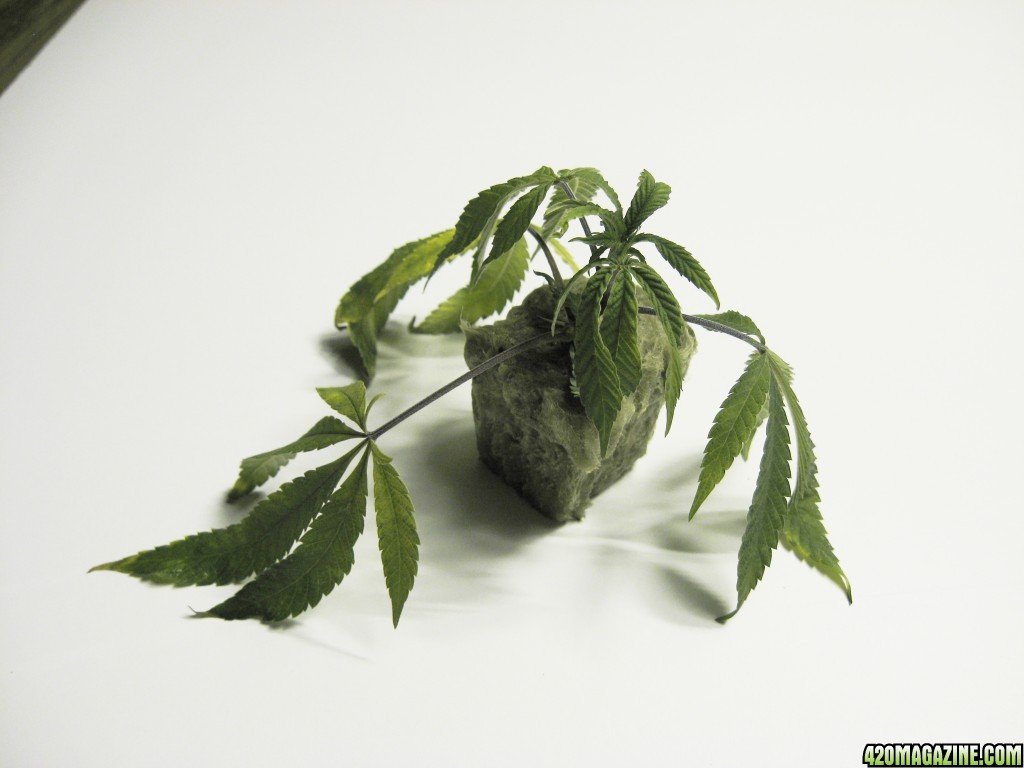 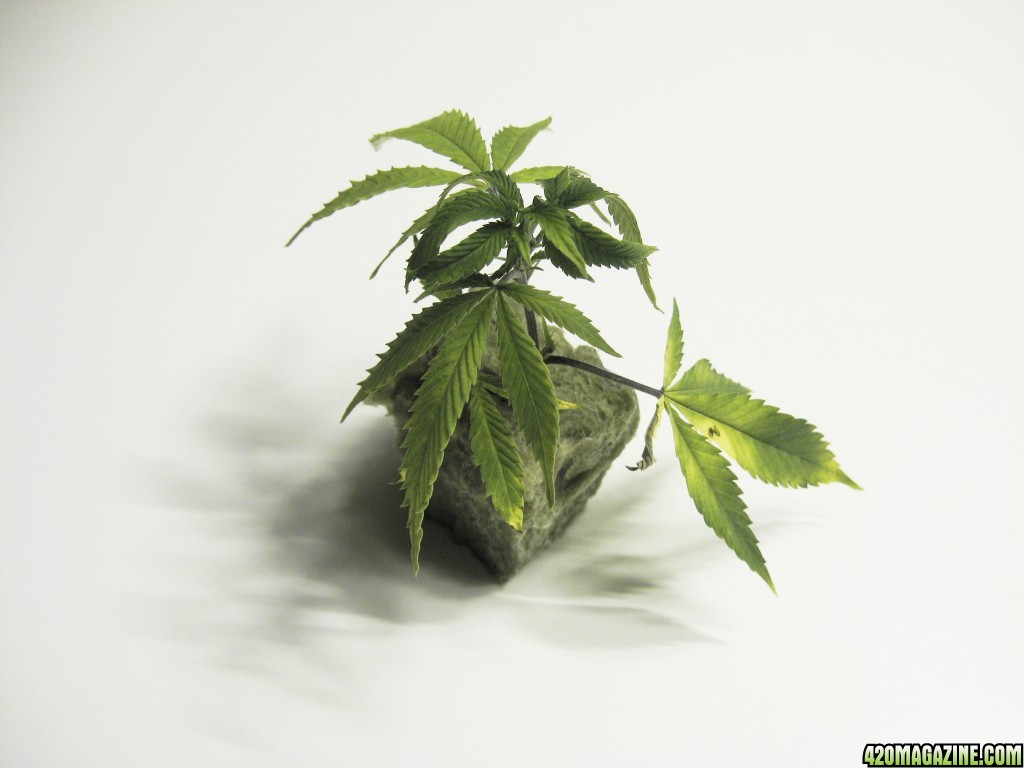 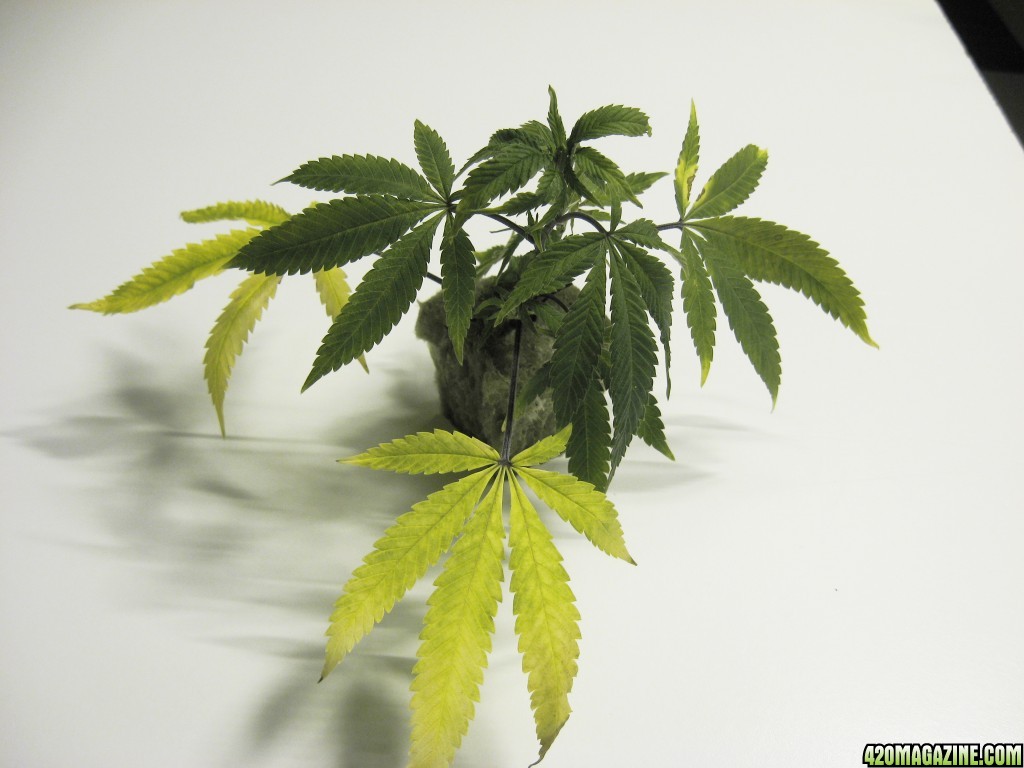 My biggest question concerns the yellowing leaves. Is this normal? Is it the stress of being moved from his house to mine? Does the new growth mean the clone is healthy? I don't see roots coming out from the bottom...how long should this take?

I'm glad to hear some of the issues may be under control or at least not accelerating. A lights on temperature range between 75F to 85F is pretty common. Some strains are more tolerant to either end of that range. It can take some experimenting to discover what works best for a particular plant. If you can get your setup to sustain a middle ground, say 80F at the peak, a little swing in either direction now and then will be easier for the plant(s) to tolerate.

A fan or two will have a several benefits. Firstly it will push warm air away from the plant and help respiration. Second, it will help create a strong stem allowing the plant to support it's own weight. Third, later on in flowering it can help prevent mold and bud rot. A simple, small oscillating fan or two is generally sufficient. A gentle, indirect breeze wafting over the tops (just enough to cause a little turbulence in the fan leaves) is preferable.

I wish I could lend more advice. I've only just started to grow from seeds and I don't know much about cloning. I only gave a passing glance to the cloning info I've come across in my research. I don't think the yellowing is normal. Not in a vegetative stage. I would also expect to see root growth by now.

It may be a good idea to throw a question in the FAQ area to get some additional input.
Problems, Pests & Disease Control 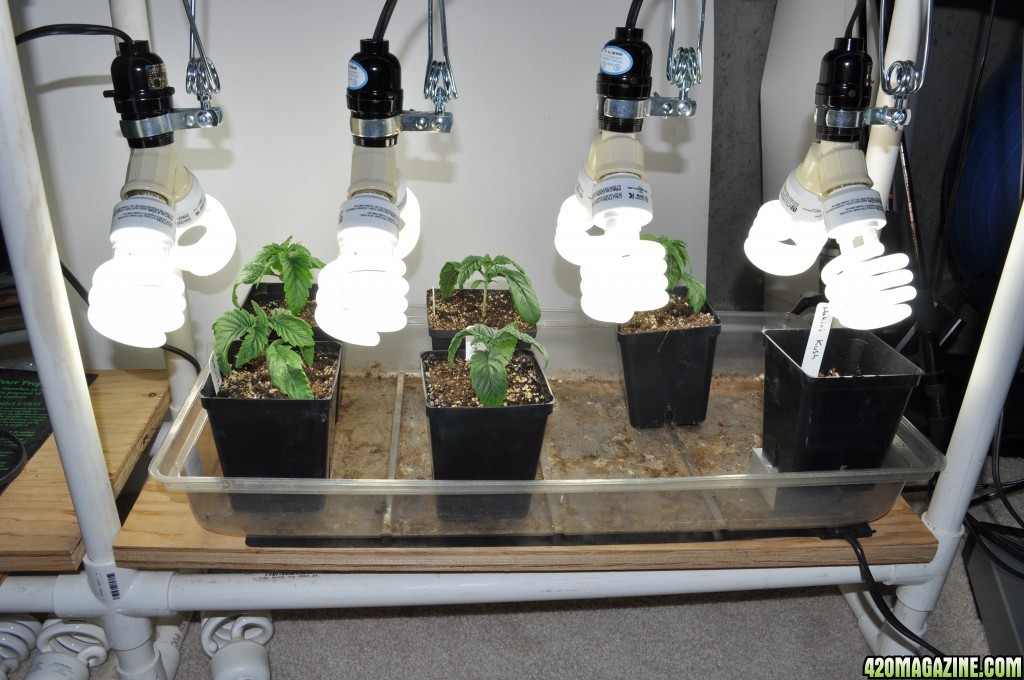 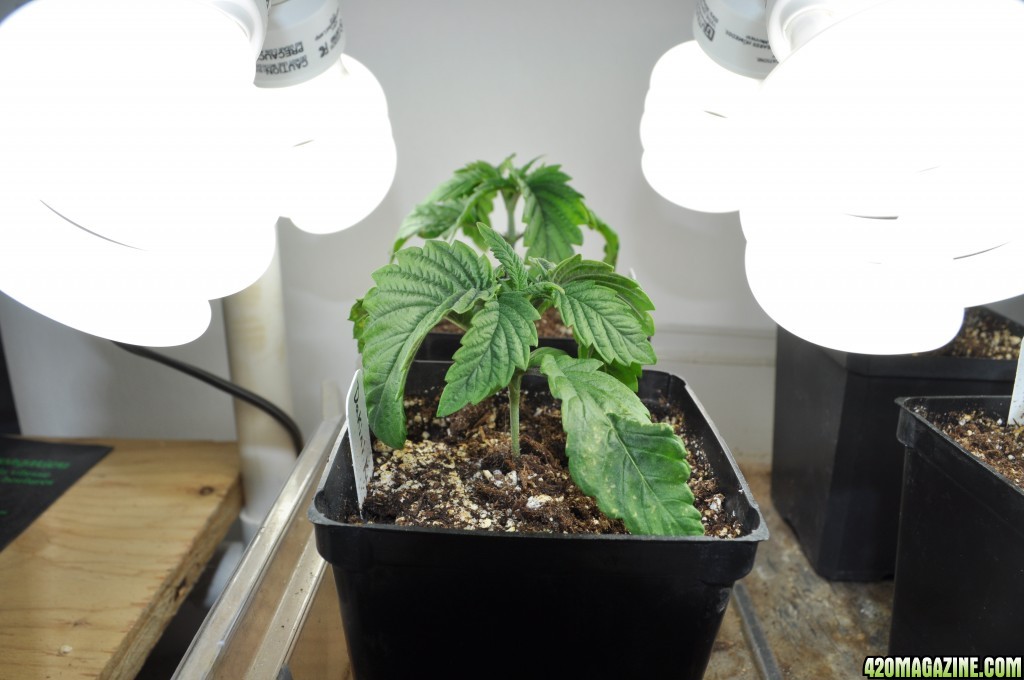 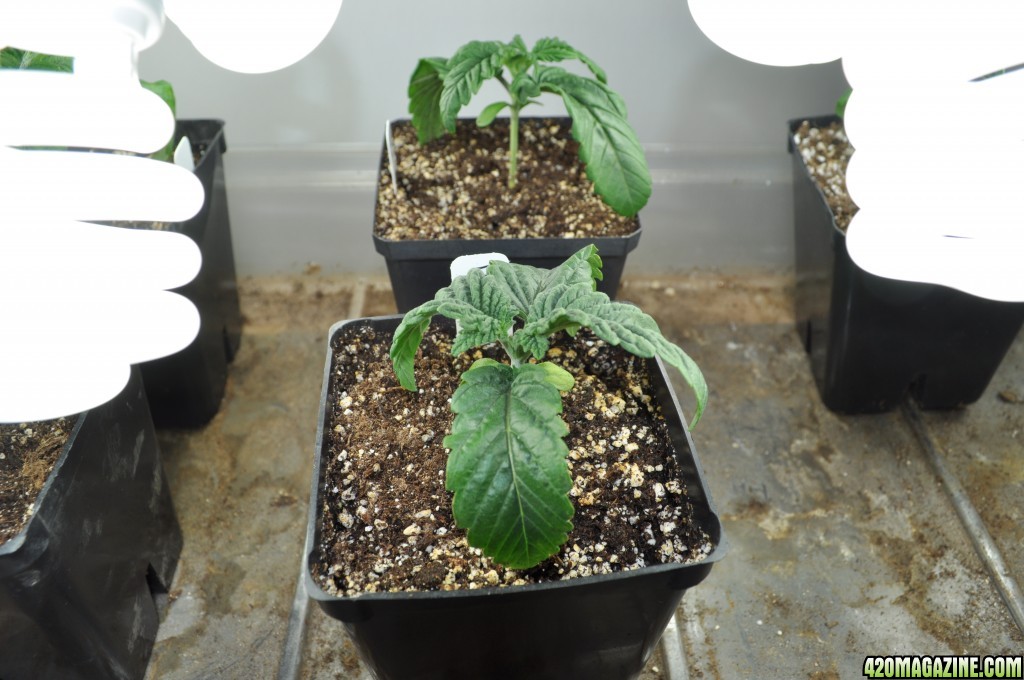 I still have this tiny Bonsai Plant. It bloomed very late, and never really grow. I'll let it run it's course and see what happens. 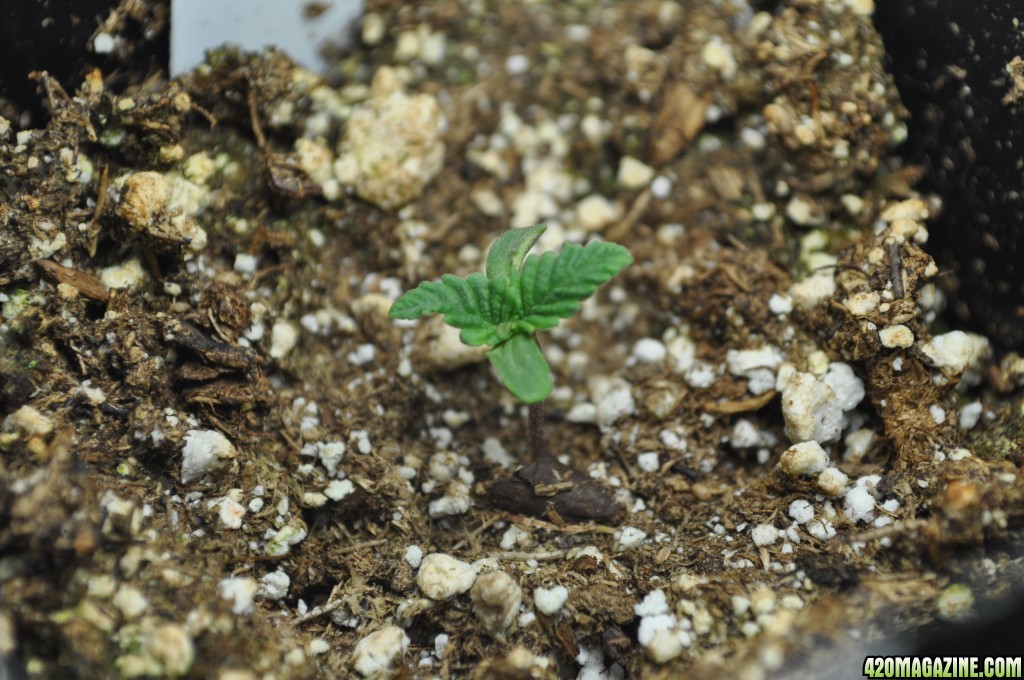 We also bent over the top of the most established Mystery Clone. Trying to promote some more bushy growth. 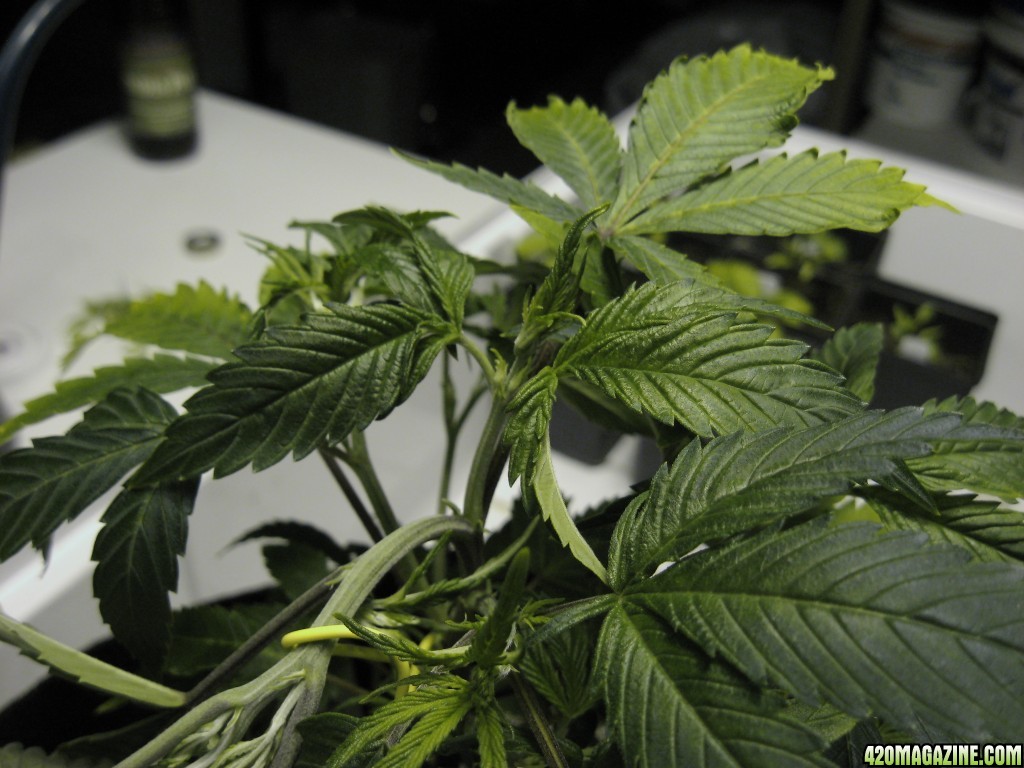 This morning I noticed some spots on two of the Dakini Kush plants. In person, they look a bit more rusted than they do in the picture. I don't know for sure, but I suspect a Calcium issue? I did some reading and found this can happen when using filtered or reverse osmosis water...on the last good watering I did, it was filtered. I read that regular tap water should have the calcium needed, but filtering can strip that out. I don't know enough about this, so here is the picture: 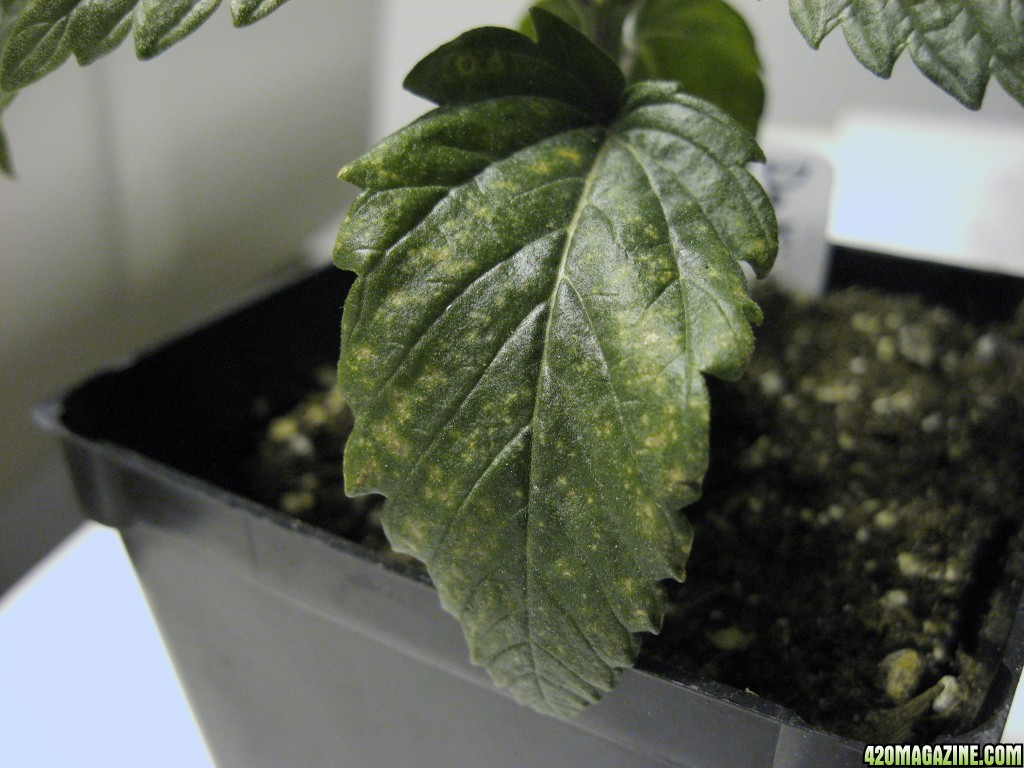 Not much has happened in the past 6 days, but there have been a few updates that should be posted.

This past weekend, the seedlings made a journey over to the big light. They really seemed to kick into high gear, but are settled down again. 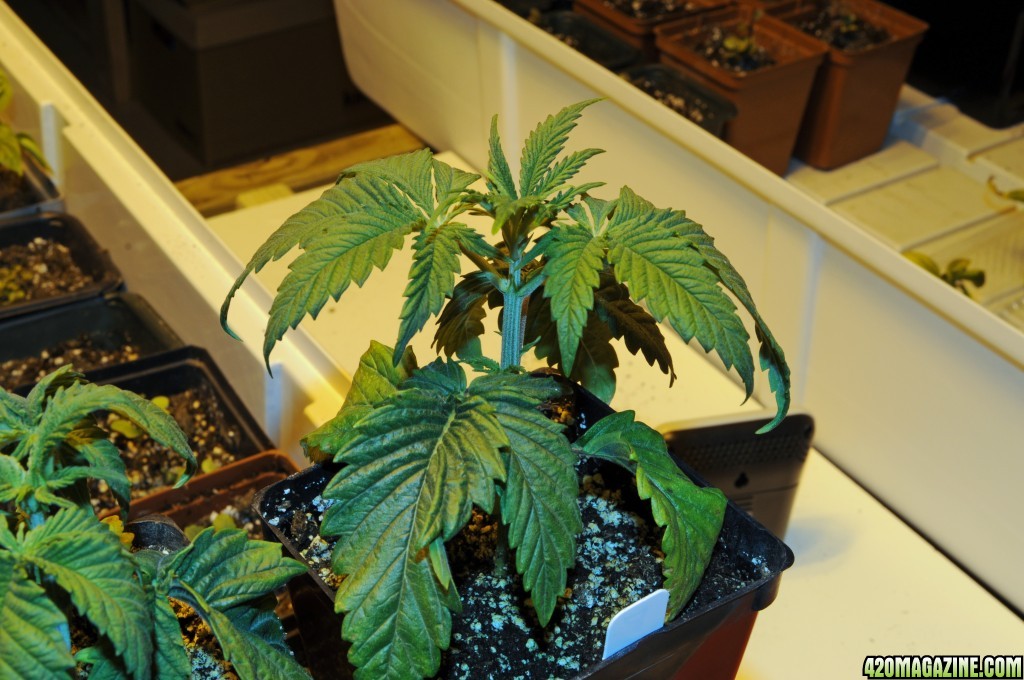 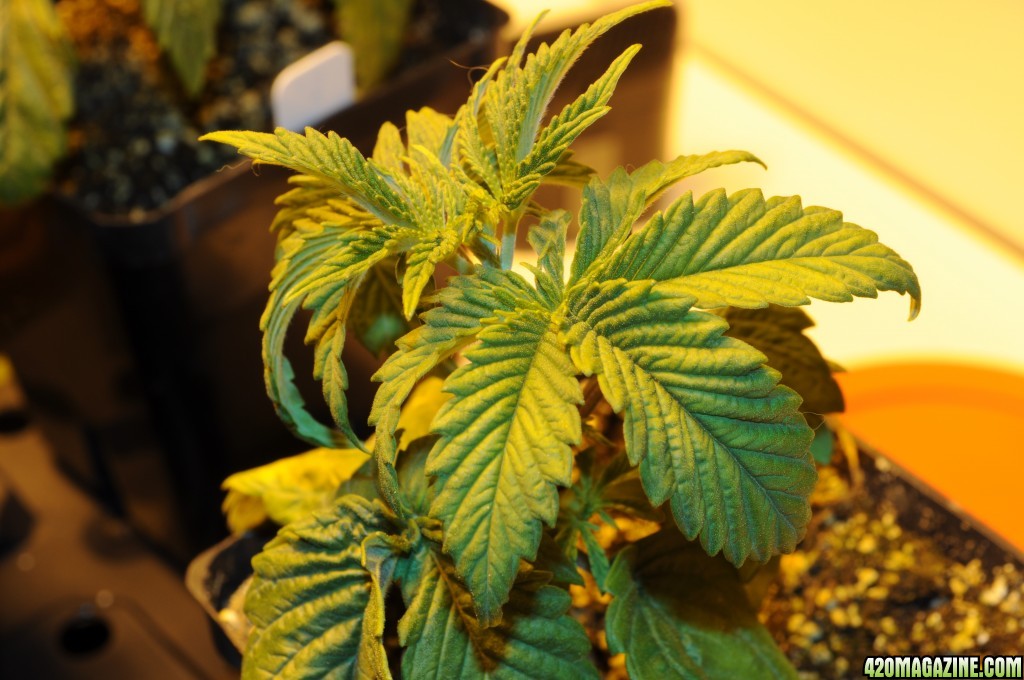 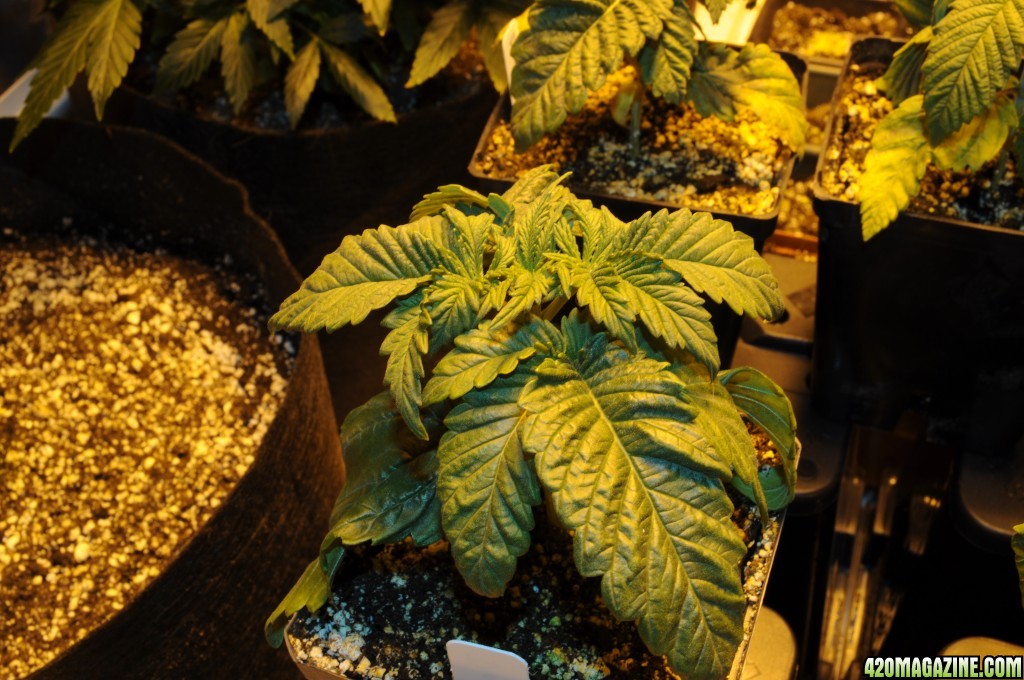 Today though, there was some great news! I really thought this clone was a goner. She was transplanted into a smart pot, and never looked good. There was always a bit of green, so I left her over to the side, and out of direct light. I'm so glad I let her stay because I came home today to see a bunch of new growth: 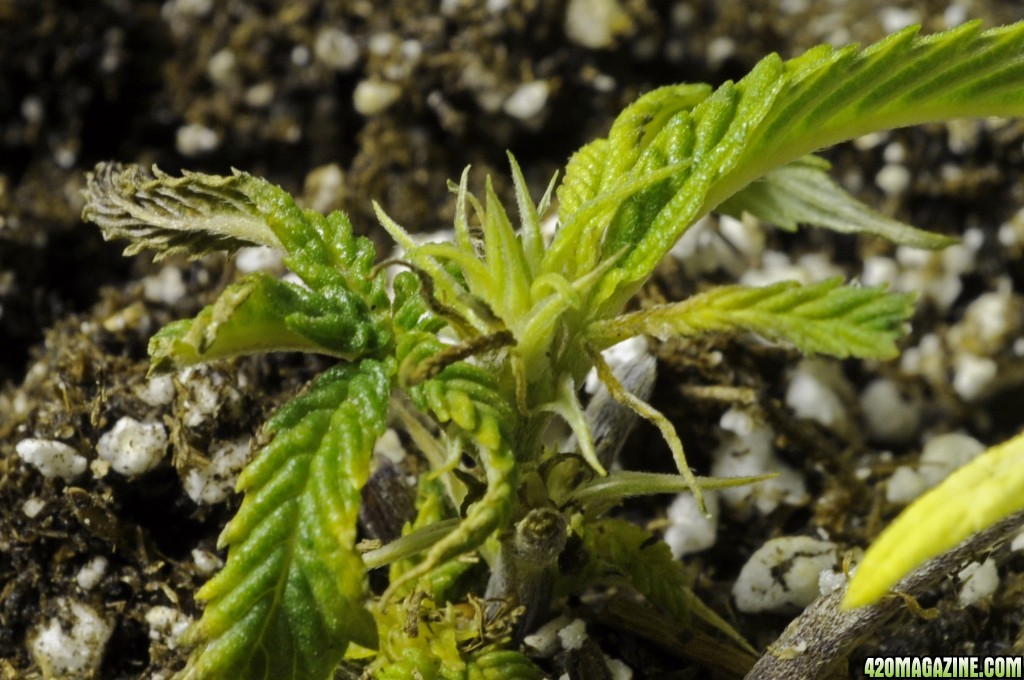