Guns and marijuana don't mix, according to federal authorities, even if the gun is a legally held firearm and the drug is recommended by a doctor. That interpretation of federal law is turning up in Illinois' draft medical marijuana regulations to the frustration of patients and caregivers. As the state launches its first medical cannabis program, firearms ownership is overshadowing other issues such as the $150 proposed annual fee for patients and how new medical conditions would be added to an approved-for-use list.

"People aren't yelling at me about the $150. They're yelling at me about this issue," said Chris Lindsey, legislative analyst for the Marijuana Policy Project, a national group that supports legally regulated marijuana. Lindsey said he believes it's the first time a state agency anywhere in the country "has pointed to a state law and decided that patients may not be able to possess a firearm." And Karmen Hanson, medical marijuana policy expert for the National Conference of State Legislatures, said she's not aware of any state laws that address firearms ownership among medical marijuana patients or their caregivers.

Some Illinois patients will continue to use marijuana illegally rather than give up their guns, said Julie Falco, of Chicago, who speaks openly about how she has used cannabis to control her pain from multiple sclerosis. Brian Hilton, of Arlington Heights, is one of them. He's a gun owner who wants to use marijuana legally to control pain from a spinal cord injury, but he's reconsidering applying for a medical marijuana card. "I would be forced to surrender my gun rights, and that would put my family at great risk," said Hilton, who makes a living repairing musical instruments. "I would rather keep my weapons and stay underground."

The dispute centers on 93 words out of 48 pages of rules proposed by the Illinois Department of Public Health. The wording, in effect, advises gun owners they'll be in violation of state and federal law if they're approved for a medical marijuana card and don't give up their firearms. It says gun owners who obtain medical marijuana cards "may be subject to administrative proceedings by the Illinois State Police if they do not voluntarily surrender" their firearms owners ID cards or concealed carry permits.

Caregivers, too, who apply for medical marijuana cards would be required to certify they understand they "may not possess firearms under relevant state and federal laws." It's still unclear how any of this would be enforced. Sandy Champion, of Somonauk, owns guns and plans to apply for a caregiver card so she can legally obtain marijuana for her husband, Jim, who has multiple sclerosis. She has no plans to use the drug herself. "I'm not giving anything up until I'm told I have to," Sandy Champion said. "But if I have to choose between owning a gun and giving Jim his medicine, I'm going to choose giving him his medicine."

The Illinois Department of Public Health referred questions about the issue to the Illinois State Police. Monique Bond, a state police spokeswoman, cited the federal Gun Control Act and the state's Firearm Owners Identification Card Act as the legal basis for the wording in the draft rules. "We are bound by federal law," Bond said in an email, adding that the federal Bureau of Alcohol, Tobacco, Firearms and Explosives interprets marijuana use to include possession and argues that "this means all persons (patients and caregivers) are prohibited" from gun ownership.

ATF spokesman Thomas Ahern confirmed that is the current interpretation. He said federal law allows no exceptions, even if medical use is sanctioned by state law, which ATF spelled out to firearms dealers in a 2011 open letter. Lawyers drafting the current regulations "believe that federal law requires them to write the rule this way," said state Rep. Lou Lang, a sponsor of the medical cannabis legislation who also sits on the committee that will vote on the rules. But he called the deference to federal guidance shortsighted.

Gun rights groups in Illinois aren't saying much. "We don't have a position on it," said Todd Vandermyde of the National Rifle Association. The Illinois State Rifle Association is looking into the issue, said executive director Richard Pearson. "I think it will be a few years before this gets worked out," Pearson said.

Illinois' medical cannabis program was established by the Legislature as a four-year experiment and has been called one of the strictest programs in the nation. Manteno resident Mike Graham, a longtime supporter of the legislation, said he's worried the firearms restriction will hurt the program's viability by discouraging patients from applying for marijuana cards. "They're allowing law enforcement to dictate a medical program," Graham said of state health officials. The health department is asking for public comments on the draft rules by Friday. Rules for dispensaries and cultivation centers still are being drafted by other Illinois agencies. 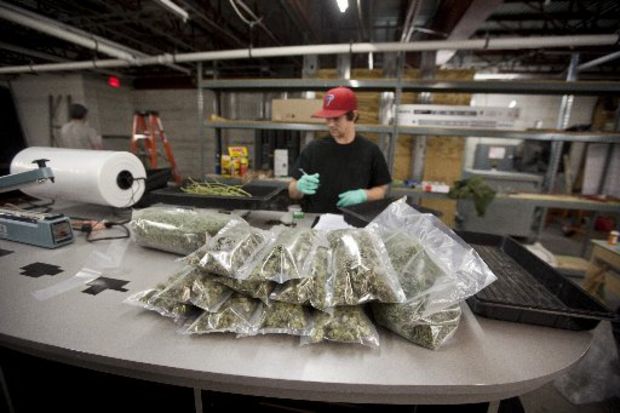