Oakland's Harborside Health Center is in the business of selling medical marijuana. This is obvious to anyone -- and in particular the dispensary's landlord, who last week had her effort to evict the dispensary tossed by a judge.

The landlord, Ana Chretien, tried to evict her tenant in an effort to prevent the federal Justice Department from seizing 1840 Embarcadero, which has since 2006 housed the dispensary. U.S. Attorney for Northern California Melinda Haag filed a forfeiture proceeding in July, and Chretien filed an unlawful retainer lawsuit in August.

Chretien might have had success, had she not made one fatal error: including in the lease explicit permission for Harborside's operators to run a medical marijuana dispensary. That's protected under state law, ruled a judge, who added that federal law can't be used to evict or otherwise shut down a state-legal operation.

This does not mean that Harborside's fight is won. Far from it. A federal judge is scheduled to hear Haag outline the government's case for taking Chretien's property -- a low-slung office building just a minute's drive from Interstate 880 -- on Dec. 20. The hearing has been postponed several times and may be postponed again.

But in the meantime, Judge Evelio Grillo's ruling is a victory for California medical cannabis providers, provided they were diligent when they signed their leases.

Harborside's operators, Stephen DeAngelo and a gentleman known as Dave Wedding Dress, signed with Chretien's company a lease in January 2006. The five-year agreement, renewed in January 2011, "expressly authorizes Harborside to use the premises to operate a medical marijuana dispensary."

All was fine until Harborside employees showed up to work after the July 4 holiday to see forfeiture notices from Haag's office taped to the door. Chretien filed a lawsuit to evict Harborside on August 3, alleging that the dispensary violated its lease by conducting illegal activity that constituted a nuisance.

But a state court cannot deem a medical marijuana dispensary a "nuisance" -- thus rule that it may be evicted or otherwise shut down -- because state law protects dispensaries from such rulings, Grillo ruled. Further, a state court may not use federal law to declare a use or entity unlawful if that use has protection under state law. To do so "would be to improperly enforce federal criminal law," the judge wrote.

Chretien may be able to find a judge willing to sign an eviction order, but only in federal court, Grillo wrote.

Likewise, landlords who signed leases with medical marijuana dispensaries may be able to evict their tenants in a state court, but not if the leases include language permitting medical marijuana dispensaries. Or, in Chretien's case, "she could have included provisions giving her a right to evict based on conduct that violated any law, including the federal controlled substance law regarding marijuana," the judge wrote. "But she does not, at least in this proceeding, claim that she did so." 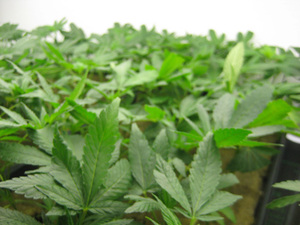