Minneapolis - The fields are planted all across Minnesota; endless rows of corn and beans are healthy and deep green.

But on a rural Hastings farm, the crop Ken Anderson is planting is making a bit of history.

"It's even more exciting now to be doing it here," Anderson said.

What's got him so excited is that the crop going in the ground this Friday has not been legally planted in Minnesota in decades.

Anderson digs deep into a sack and pulls out a handful of hemp seed.

"I'd like to see it in cereals because right now we're not seeing it in cereal," Anderson said.

He is promoting the benefits and promise of a once vital crop. His company, Original Green Distribution, was recently approved to plant the first crop of industrial-grade hemp.

Eighteen acres of hemp are awaiting germination in the rich soils of Denmark Township.

"The grain is an optimum food product, so it's very high in omega three and omega six, very high in protein, the oil content. It's another oil seed crop is what it is," he said.

Hemp is used in a number of food products, as well as in the textile and fiber industry. It is vital in the production of natural rope, and has lately found uses in the manufacturing of paints, insulation and other construction products.

Unfortunately, the U.S. government - through the Drug Enforcement Administration - continues to list industrial hemp as a controlled substance. That is despite the fact its level of tetrahydrocannabinol (THC) is a mere fraction of what is contained in marijuana tobacco.

That view of hemp is slowly beginning to change, as is evident in the 2015 Farm Bill passed by Congress. The bill authorized pilot programs for growing hemp in all 50 states.

"It's not like something happened to hop above 0.3 percent that it suddenly becomes a smokable entity," said agronomist Dave West. "We're dealing with apples and oranges."

West is comparing the amount of THC in hemp versus that found in marijuana, which contains between 8 and 20 percent. He says industrial hemp is not even close to marijuana.

Anderson hopes his test plot, which has the approval of Gov. Mark Dayton and Minnesota Department of Agriculture, will open the door to other farmers - eventually leading to the development of new products and markets.

If successful, it just might give them another way to grow money from the fertile ground. 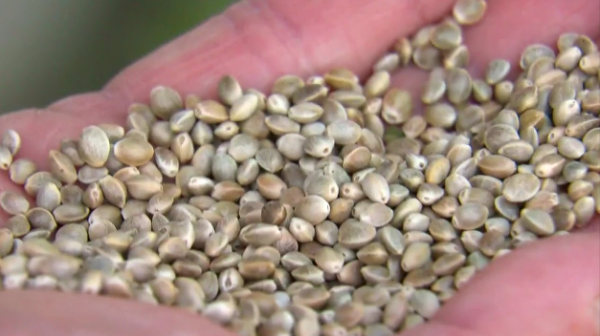 Sep 9, 2016
Katelyn Baker
K
K
Minnesota Is Back In The Hemp Business