Bills that would allow the state Department of Agriculture to create pilot research programs for industrial hemp are moving through both chambers of the state Legislature.

"I'm very happy that the bill is alive at this point," state Sen. Russell Ruderman, D- Puna, said of Senate Bill 2659, the Senate measure that he co-introduced.

SB 2659 and its House counterpart, House Bill 2555, are not companion bills, but have the same aim of establishing the agriculture research program.

Since the 2014 federal Farm Bill was signed into law, industrial hemp has been permitted as a cultivar as long as it is being grown for research purposes, which include growing, cultivation and marketing, under the authority of the state departments of agriculture or universities.

Rep. Clift Tsuji, D- Hilo, chair of the House Committee on Agriculture and one of 32 representatives to introduce the House measure, stressed the explicit limitations laid out by the bill.

"It regulates for research purposes," he said. "This has come a long way, but it has a long way to go."

HB 2555 has passed two House committees, which Tsuji said is the farthest any similar bills have advanced in that chamber. The Senate bill has cleared three committees.

"Some people are very conservative about hemp because they fear it's something to do with marijuana, and it's not," Ruderman said. "There's no potential for anyone to get high from industrial hemp."

Hemp and marijuana come from the same plant, Cannabis sativa. Industrial hemp plants are specifically bred for their fiber and seed producing qualities. Their tetrahydrocannabinol (THC – the chemical that causes psychological effects in humans) levels are less than 0.3 percent, according to a 2015 report produced by the University of Hawaii's College of Tropical Agriculture and Human Resources.

"There're fiber hemps that grow like gangbusters," said retired UH-Manoa biology professor Harry Ako. "It's stunning, is what it is."

Ako served as project lead for the 2015 report, which was the result of a two-year feasibility study at a Waimanalo, Oahu, site investigating how hemp would grow in Hawaii's climate (it took 11 months to obtain permits from the federal Drug Enforcement Administration for seeds). The project wrapped in December last year.

Ako said he wasn't paid to do the work, and instead did it for fun.

"I really get a kick out of helping people," he said. "There's a lot of folks that are going to be able to make a living, a decent living."

The team found that subtropical hemp varieties thrive here. Ako estimated that between 31 and 37 dry weight tons could be grown on an acre in a year, and said yields that large could be used to address one of Hawaii agriculture's main challenges: the cost of inputs like animal feed and fertilizer.

"That's a whole lot of leaves, and you can feed it to cattle," he said.

Industrial hemp grown primarily for its seeds could serve as a food source for poultry.

"When you look at a bag of birdseed, for a parakeet ... it's almost all hemp seeds," Ruderman said.

The crop also can be used for biofuel and to create a construction product called "hempcrete," although Ruderman was "more excited about the feed, food and fiber aspect of it."

Tsuji said he viewed industrial hemp as another alternative means for sustaining agriculture in Hawaii, particularly in the wake of Maui's Hawaiian Commercial & Sugar Company plantation closing down.

In testimony presented at the Senate Committees on Judiciary and Ways and Means, Department of Agriculture chair Scott Enright wrote that the department "looks forward to establishing industrial hemp as a potential candidate crop and add it to Hawaii's diversified agricultural industry."

"It bears looking into," Tsuji said. 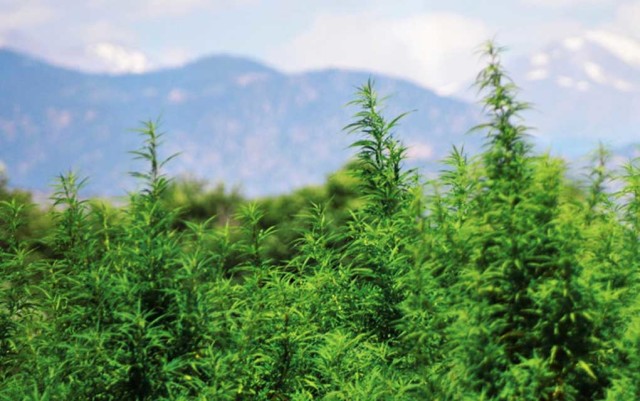