Hello, I've been lurking awhile now and wanted to step out into the light and say hello

I'm a nerd in general (electronics and computers the best toys, if i need an hid ballast, i'll build one..) and been a smoker for years.. recently discovered how much better it works for old knees and such than narcos.. anyway i was given this seed about two months ago. it was allegedly some sort of "purple erkle" that was "the last of its kind" et cetera.. you know.. bagseed.. but hell.. i needed a project (read toy).. that had lots of variables

anyway.. I did my due diligence (and several more wax/oil bong hits) and she has been under 70w hps + 6x15w 1st gen cfls 24/0 and intermittent fan for just about 60 days and has begun showing preflowers. 4 days ago she was transplanted into clay pots that are about the volume of a 5 gallon bucket but 2/3 the height (in fact she is sitting on an upturned bucket on a turn-table i had laying about..) Last night I showed her there was such a thing as night. and here are my results thus far: 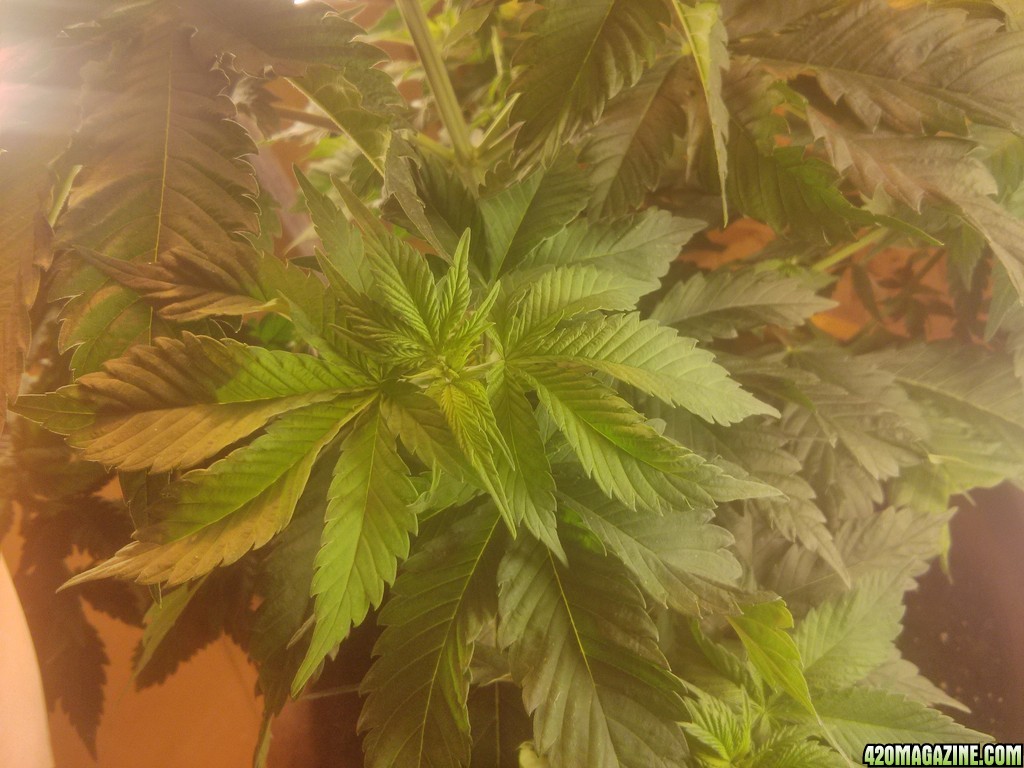 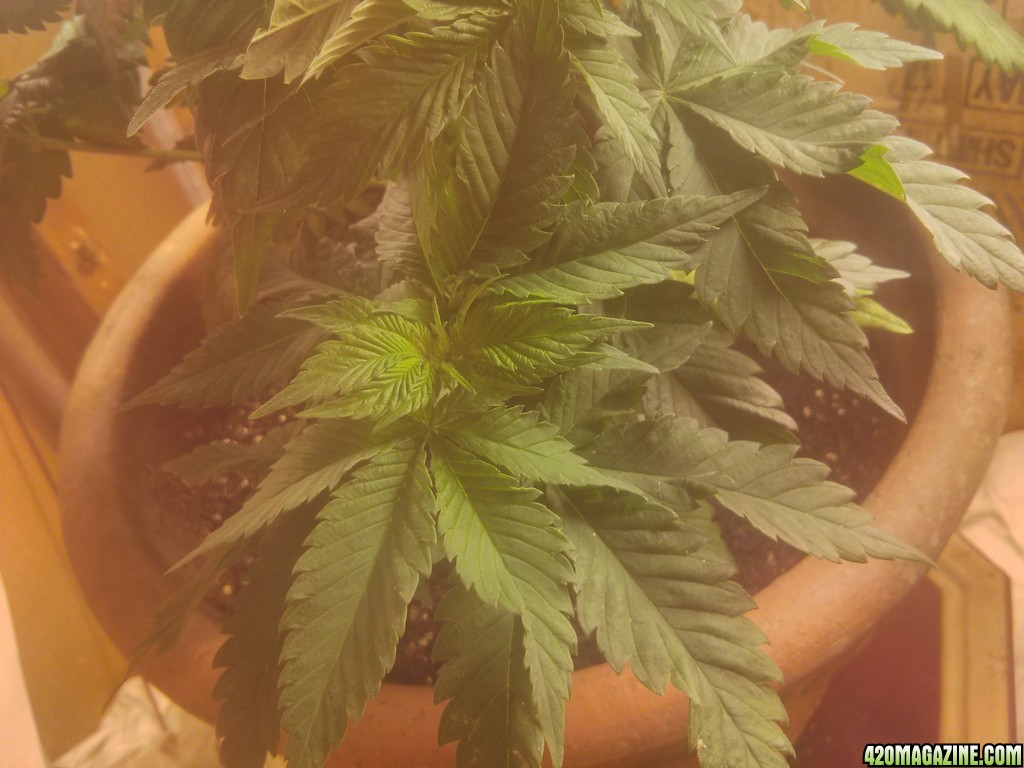 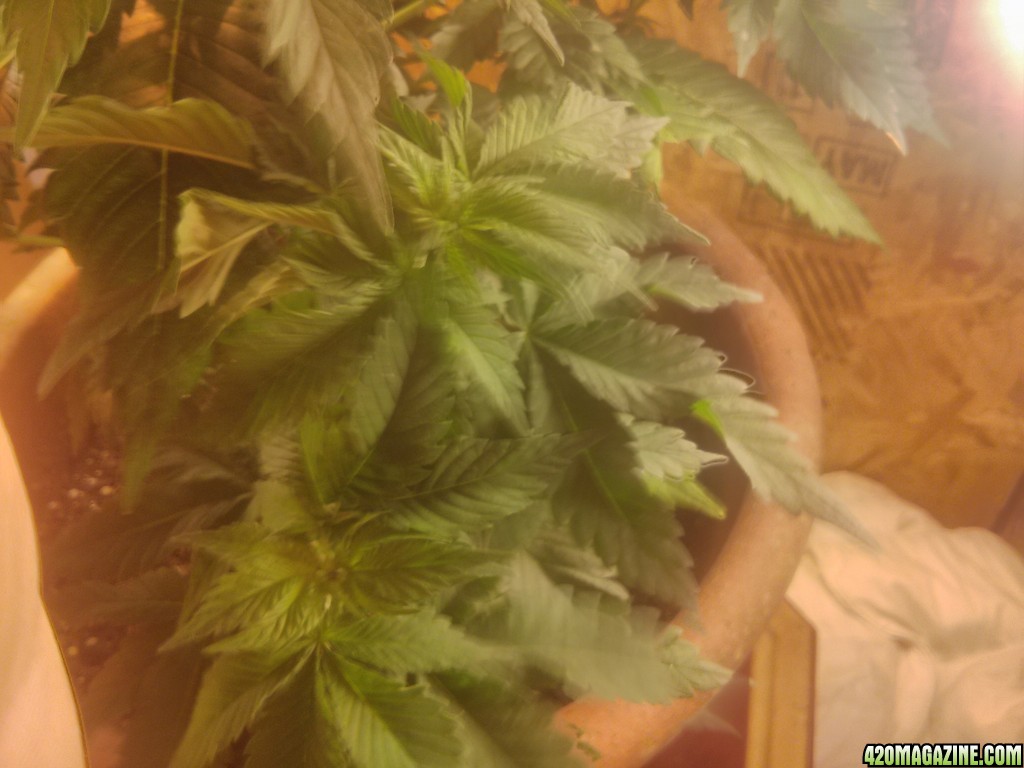 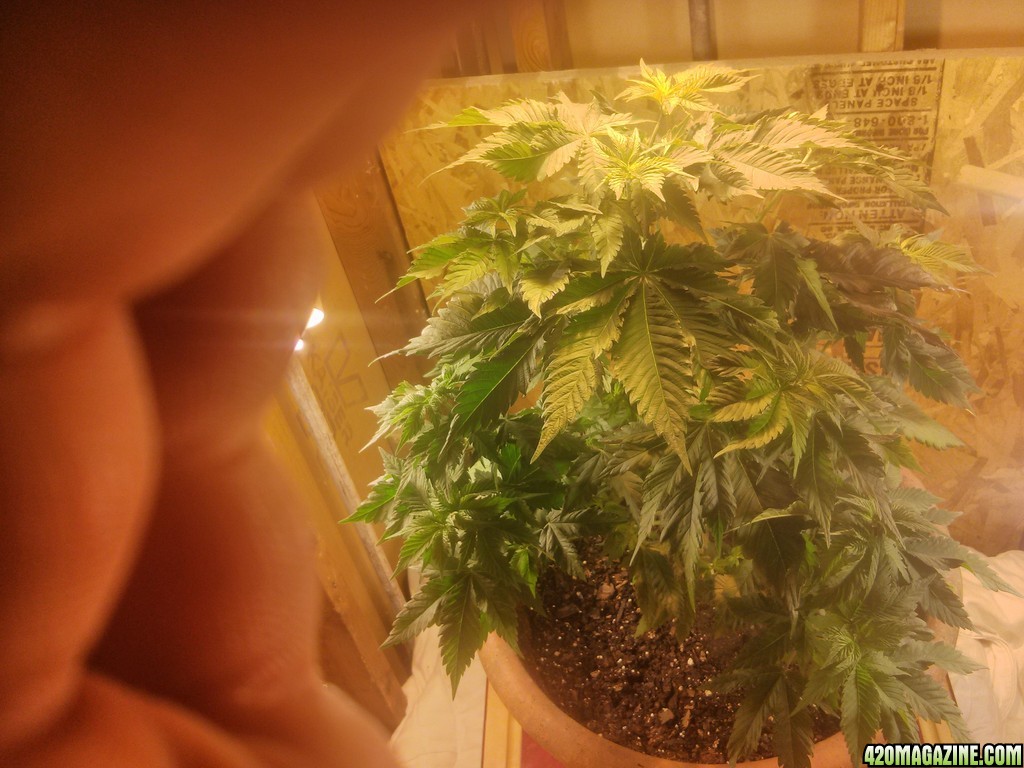 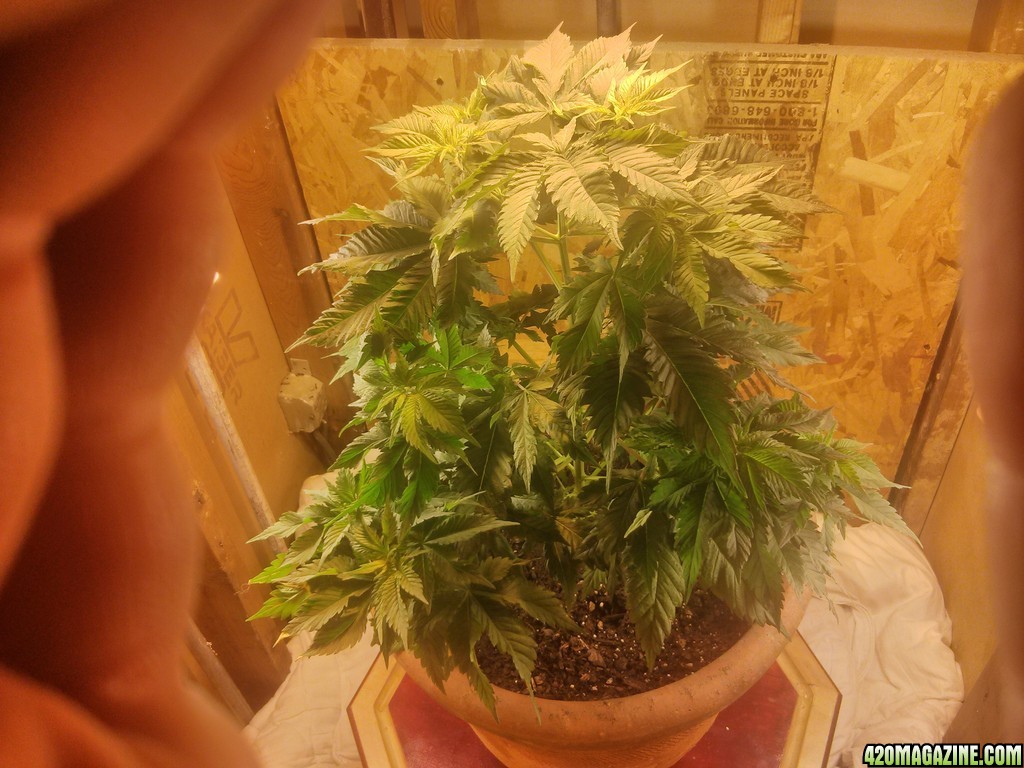 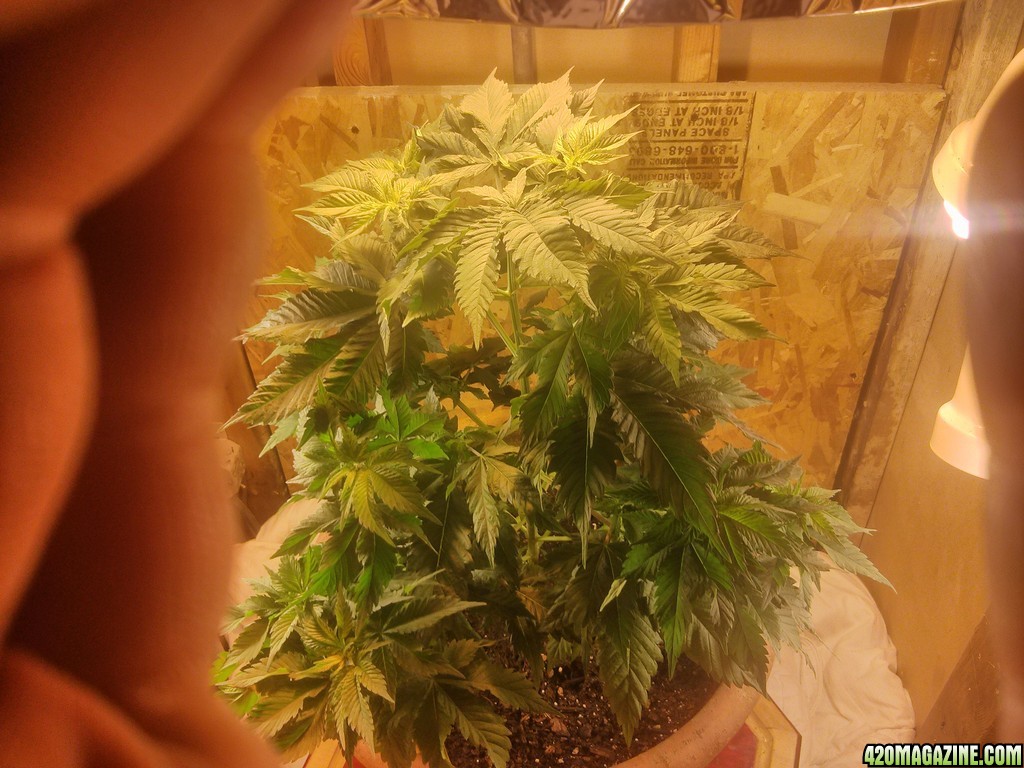 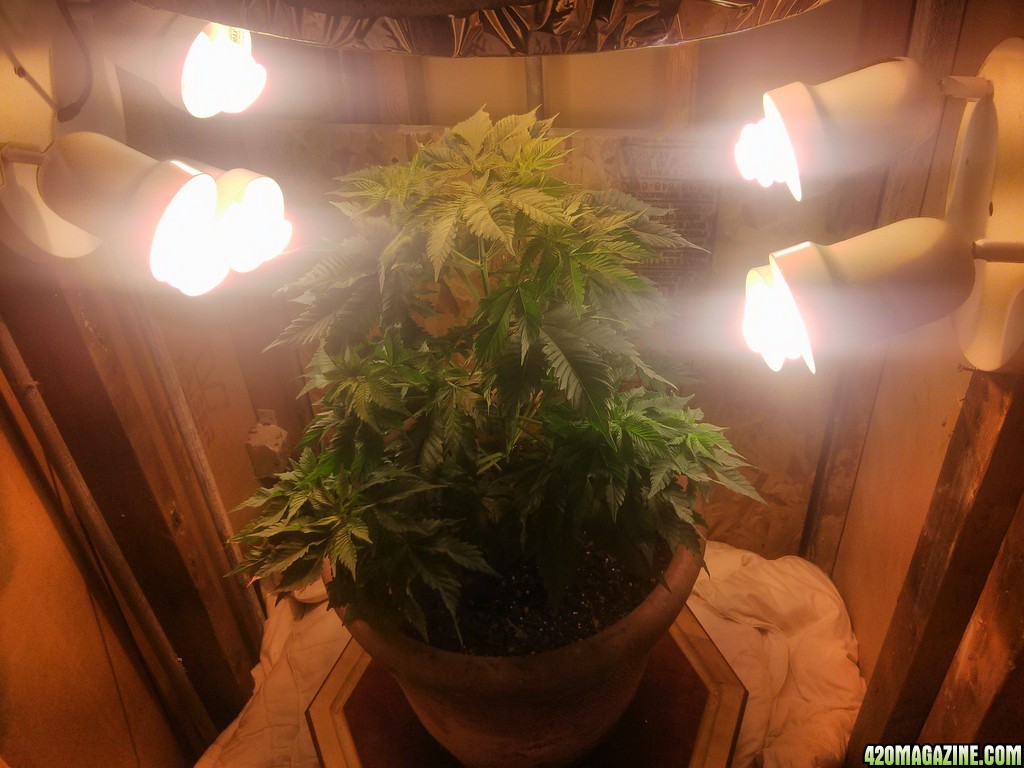 so.. the obvious newb question out of the way, but hopefully the pics help.. any wild guesses as to yield? no idea as to genetics and i know that the real answer is "youll just have to wait and see" but i would love some experienced growers' wild guesses. second: I have been feeding once a week with a low strength fert that was apparently crap. i saw signs of ph or nut def/lockout but am unable to measure ph (i know.. soon corrected along with a bunch of other things..think home automation and bong hits.. ) I corrected by first flushing the plant with about 2 soil volumes of tap water and allowing her to drip for the afternoon. I then transplanted into a clay pot that is right about 13" tall and 13" in diameter, watered her, and the next day fed her half strength Costco 20/20/20. She is very happy now. The plant is 17" tall and 20" wide on way and 17" the other. Just put her on 12/12 last night.

How cold can it get overnight during the dark cycle? Heating the room with the door closed is an issue at this very moment. it was def chilly when i turned the light on. 50f maybe

Should I spray / mist the leaves?

Tap water: I have been watering straight from the tap. now I have an aquifer but it is still chlorinated (and likely fluoridated too.) I have seen no issues but as yet have not checked ph. advice? other than the obvious.. meters are coming i promise

Nice lady you have there, good luck with the grow.
420 Magazine®
Creating Cannabis Awareness Since 1993

Welcome to 420 Magazine. Your plant is beautiful indeed and does not appear to be wanting for anything at the moment. I would however suggest consider investing in some cannabis specific nutrients as the 20-20-20 definitely has the potential to create a nutrient lock out situation.

As to yield, I think you can expect your girl to just about double in size over the course of the next 8-10 weeks of blooming. With that in mind, I'm going to suggest if that you continue to keep her shaped well (as you have been) then you might pull 2 or 2.5 oz's. off her.

No clue what strain, but it certainly appears to be an indica dominant strain, so the good news is it will finish sooner rather than later!

Be well and happy growing!
"Governments are not competent and do not have the moral authority to ban something, based either on disapproval or a desire to protect people from their own choices. It is high time we stopped interfering with adult choices. Government opinions are only relevant to those who are incapable of deciding things for themselves.