I have posted for help on another thread, but noone has responded yet, decided to try a new post in the correct forum. I am at day 70 of flower, and most of my trichs still appear to be crystal clear. The few cloudy ones have been cloudy for two weeks. I stopped the nutes for about a week, thinking we were about done. But I started dosing again a week ago and considering they still aren't done, I am glad I did. I have decided that I will probably nute right up to the end, I have smoked some lower branch buds already and it tastes just fine. They are also getting 1 tablespoon of blackstrap molasses per gallon of water. 7 plants get a total of 2 gallons of water per week.

This is my first grow, maybe I am being hyper-concerned, but it doesn't appear many strains go for longer than 10 weeks. Goes without saying really that I don't want to let them over-ripen. Hope I am not missing something, don't know how I could be, I can see the trichs clearly with a 60x scope. Maybe they are just going to be ready overnight? Or does it seem they are still a couple weeks off? I don't know how it works. Pics: 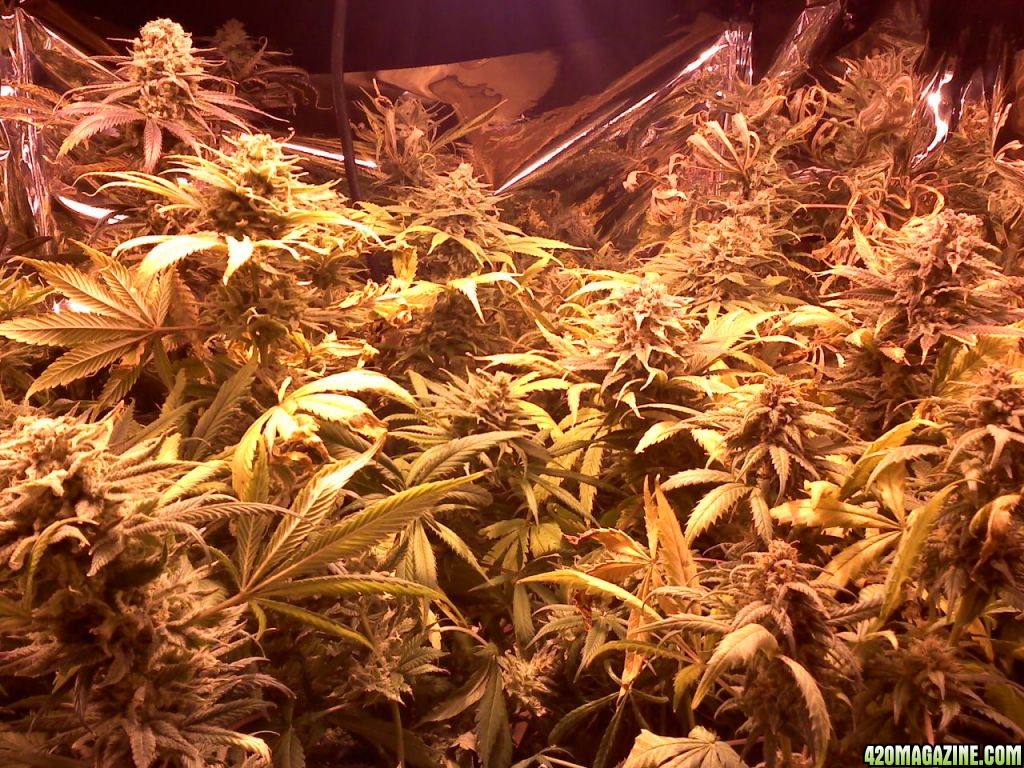 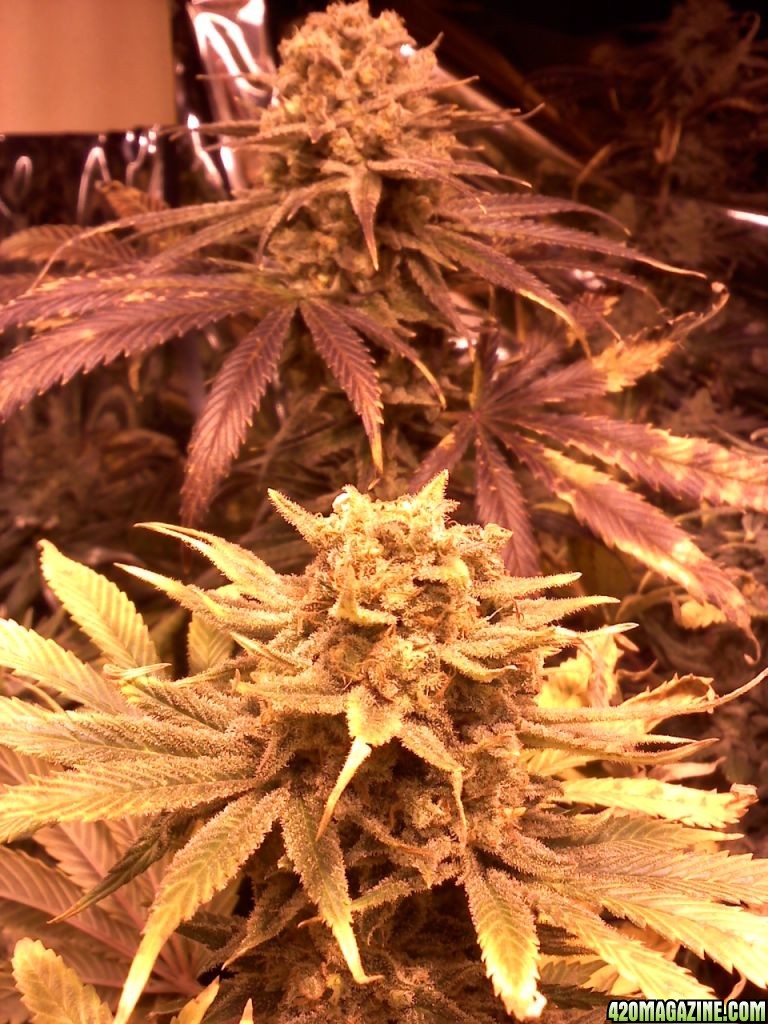 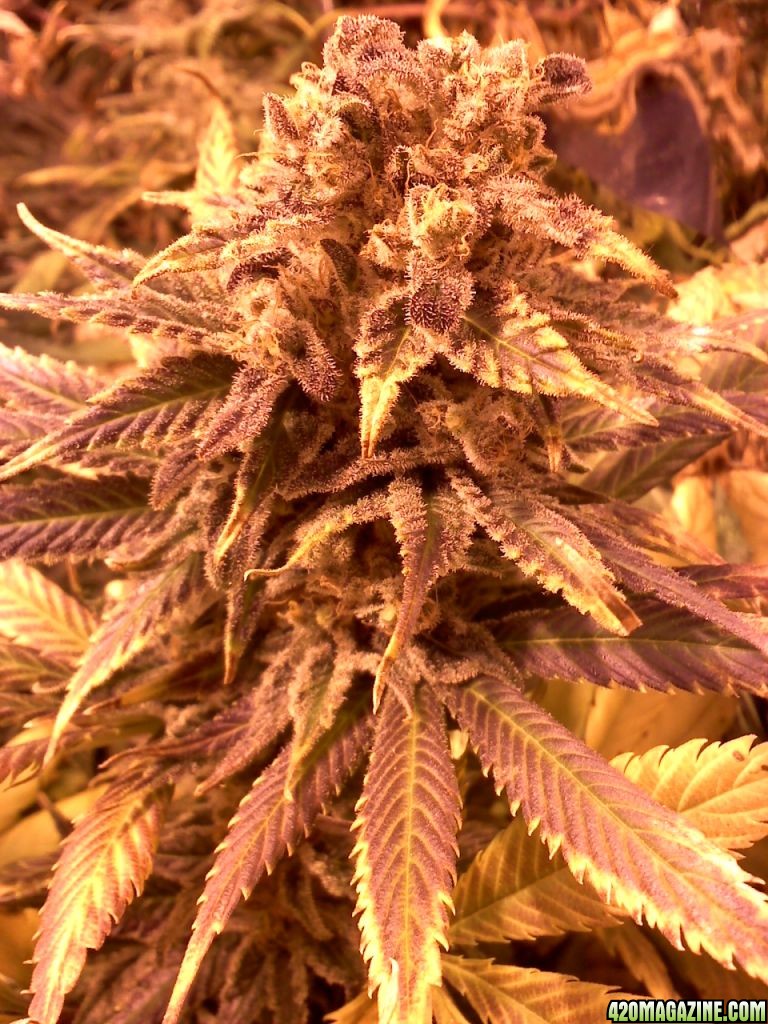 Those are some awesum looking buds ! I don't know how much longer they'd take but I'd wait !!
Depression is merely anger without enthusiasm
If it ain't broke ..break it

Getting fed and watered in a couple of hours. Trich check.
Getting the ghost patrons of the old speakeasy high since 1998... adios my friends.

Those long narrow leaves do make it look sativa dominate. Depending on how much could go 12-14 weeks.

420relief said:
Those long narrow leaves do make it look sativa dominate. Depending on how much could go 12-14 weeks.
Click to expand...


Hadn't thought about that! They looked indica dom in veg: 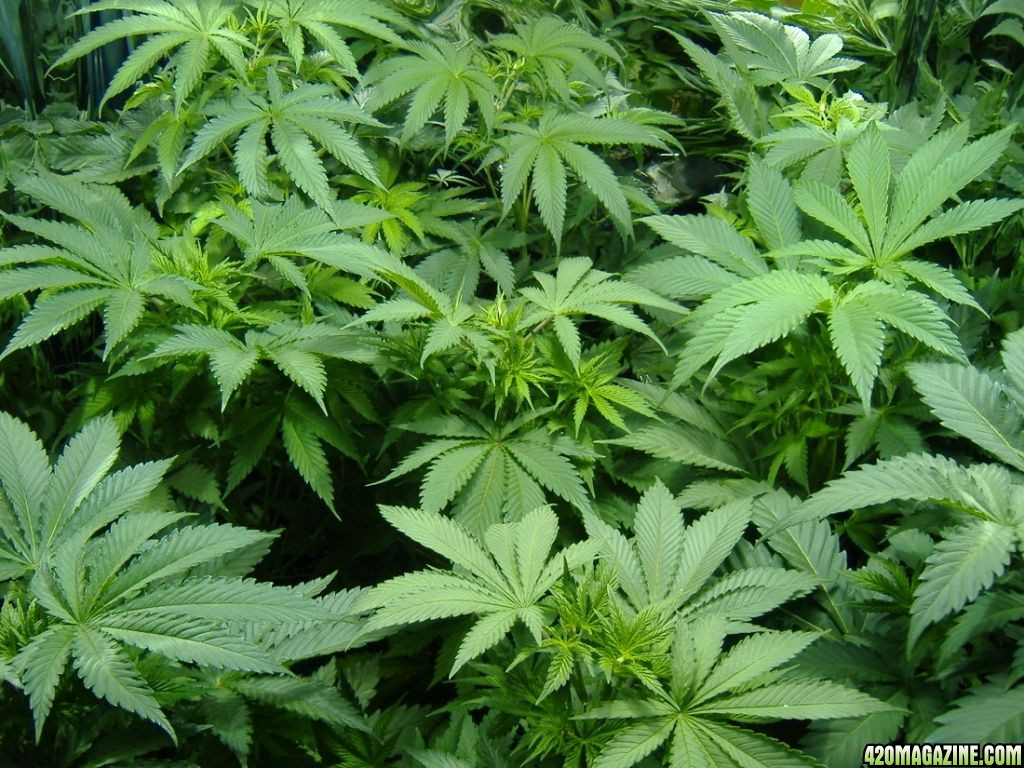 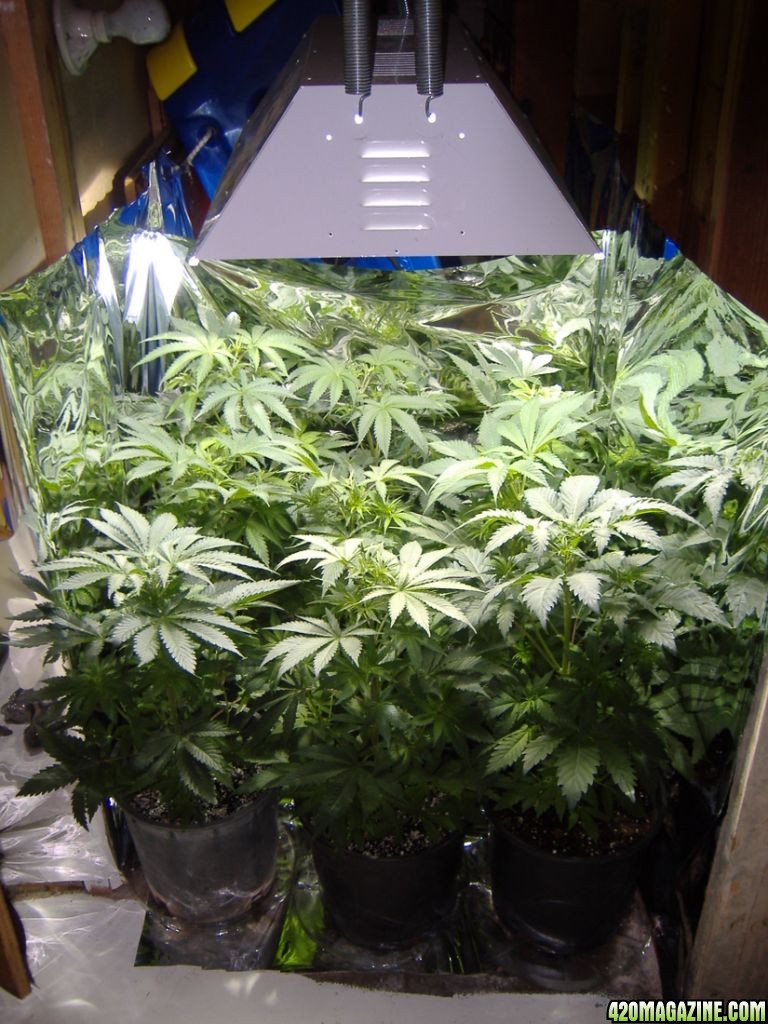 But they sure did end up changing in flower, didn't they?
Getting the ghost patrons of the old speakeasy high since 1998... adios my friends.

Nute burn could have slowed flowering a bit. and/or its just a 12+ week strain.

Some members might suggest lengthening the dark period, or giving them 24 hours dark to accelerate flowering.
Pot really does lead to harder stuff...
...Like winning The World Series.

Never had any known issues with nute burn. Probably just a long-winded strain. Forgot that sativas can go so much longer, most strains anymore are 8-9 weeks it seems. I feel much better about it now. I think I will change to to 14 dark/10 light, even though I am not in a hurry, but seems like a natural thing that would happen in fall to signal the end. I am currently doing 12/12. And I am planning on going dark 36-48 hours before harvest.
Getting the ghost patrons of the old speakeasy high since 1998... adios my friends.

They are done when they are done. I knew a guy at another site that started some Jack Herer at 12-12 from seed and after 6 months he was still wondering. I lost track of that guy but I think he was considering abandoning that plant. He had a pack of JH that he was happy with, but with the one it never finished for all I know.

Lots of the hybrids nowadays start off with fatter leaves and go thin on the uppers on the more sativa leaners. I would be happy with what you got and when they finish I bet they knock your socks off.

Great thread, great plants and great photography. Much rep from another Washingtonian (in Oregon now).

BOOM, just like that!! A look through the scope last night showed mostly cloudy with "rootbeer" color as my husband called it. Maybe 10% amber. I don't want too much amber, I am not into "couchlock", so I am taking them down early Sunday morning. Hope they won't have gone really amber by then, considering just Saturday morning they were clear with a bit of cloudy. I think what was cloudy then is amber now, and the clear is now cloudy. Friday night I will give molasses and water, no nutes, then shut off the light for 36 hours. I am sooooooo excited!

They do look massively swollen

I have already tasted, used some of the little low branches, and I have broken a couple top heavy mid-level branches with some decent size nugs. Oops! Has tasted really good, even with nutes flowing. And the smell has taken over my house. Smells like fresh cut xmas tree sprayed by a skunk, a little bit of citrus. Much better than the stuff I had been paying way too much for and for way too long! Now that I understand the science of it all I know it's because some growers don't know what the hell they are doing. Don't plan on buying another bag of over-priced crap ever again! Don't know when I will start another. But next time I will do a journal. I think I should have enough to last me several months from this grow, unless I go way overboard, which is entirely possible!

ha Im ok because i dont smoke weed atall intill my harvest comes then ill smoke it all then go cold turkey again for a few months intill my next harvest neva buy the dung weed they sell around uk.
What a world we live in ​
​

All just crap eh? I know there is good stuff around here, but it is all the kids that have it. Little fockers, lol! This is my first grow, and I am sold! Turned out awesome as far as I am concerned, and I made mistakes, a couple big ones. Next time I need larger pots, I think they are pretty root bound at this point, may have had some effect. Also not enough drainage material, too much soil I think. I have learned a lot and expect even better results next grow.
Getting the ghost patrons of the old speakeasy high since 1998... adios my friends.

Yeah all crap well as far as i know it is what iv seen and been offered i would not like to smoke. Oh its your first grow then so are you going to stick with soil are you going to opt for a hydro system?
My first grows were soil 2 iv got some in hempy buckets and they have come out so much better but could be down to the strain i guess.Yeah me to no matter how much you read up it isn't in-till you put it in to practice that it sticks. What nutes are you using? Thanks for pm 2

Yeah, I am going to stick with soil. I am not using any fancy nutes, Alaska fish for veg and Alaska Morbloom for flower, from the garden store. Also using blackstrap molasses. And you are welcome!

HolySpicoli, Sounds like another happy grower !! Nothing like smokin what you grew !! Don't do what I did and not start another grow , next thing ya know your out of weed and it's a long wait for a whole grow ...Start getting your stuff together for your winter grow not as much heat problems and if you start right you can harvest for a nice Christmas harvest for all your christmas shopping right in your own home ...

Depression is merely anger without enthusiasm
If it ain't broke ..break it

HolySpicoli said:
BOOM, just like that!! A look through the scope last night showed mostly cloudy with "rootbeer" color as my husband called it. Maybe 10% amber. I don't want too much amber, I am not into "couchlock", so I am taking them down early Sunday morning. Hope they won't have gone really amber by then, considering just Saturday morning they were clear with a bit of cloudy. I think what was cloudy then is amber now, and the clear is now cloudy. Friday night I will give molasses and water, no nutes, then shut off the light for 36 hours. I am sooooooo excited!


You had an awesome first grow. This was Bag Seed right? Two weeks makes all the world's difference in flowering weed.

So is the high an up high or what?

Are you going to regenerate these or do you have clones? You have to decide what you are going to do next. Regenerating them is something you have to plan for if you are going to cut in a couple days. Basically just leave a small bud or two on each plant and switch to 24 hour lighting for a month or so. Plenty of help available if you need it.

I want to turn right around and start another grow, haven't talked to my husband about this. He might shit bricks, but he might be receptive to it. He has enjoyed helping and watching the progress even though he no longer partakes (a close call on a drug test a few years back scared him half to death). But I am about to leave the ranks of the self-employed and be un-employed looking for a job. I might have to quit, I just don't know yet. All I know is I don't know what the hell I want to do with the next phase of my life, lol!
Getting the ghost patrons of the old speakeasy high since 1998... adios my friends.

MARIJUANA: Further proof that boys are inferior!
U

Just wondering..didnt read all the posts...but, will you have time to flush your plants, before you harvest them?
https://www.420magazine.com/forums/...0-underground-laboratory-hydro-july-10-a.html

Ohhhh, gotcha G-Dog. I was counting 10 weeks since I went 12/12. Yeah, the high is an up high, I don't have time for couchlock. I wanna smoke and then get shit done!! If I grow again, I will grow from seeds. Still have 8 or 9 of the seeds I grew from, and have some from the hermies, not too many, but enough. Which would be best to grow from? I would assume the 8 or 9 have hermie tendencies, as I wound up with two hermies out of 9 plants (2 male, 5 female as well). Only stress they got was being replanted right before I put them in 12/12, but as I understand that could've done it. Never any light cycle interruption. Now, I think I have seen that seeds from hermies will have greater chance of being female than male, but also more risk of hermie????? Hell, I don't know. I will get whatever I get if I do it again. And I figure I will probably do it again, even if I can't use it right away.
Getting the ghost patrons of the old speakeasy high since 1998... adios my friends.

Do these buds and trichs look ready?

OK to harvest? - Leaves are not yellowing