First off let me start by saying hello as this is my first ever post, this seems to be a pretty knowledgable forum and i hope to be posting here quite regularly, I will start things off by jumping straight in with the problem im having with my current grow...

I have a few different strains which are growing currently both in soil and also in clay pebbles in 2 x wilma 10 pot systems. In one Wilma i have 4 different cheese variaties (big bhudda cheese, big bhudda bubble cheese, big bhudda chiesel and royal queens royal cheese) all of these are doing fine. In the second 10 pod Wilma system i have 8 Royal queen blue mystic's, 1 big bhudda Chiesel and 1 Green house seeds Diamond Girl and in the earth pots i also have 8 Royal queen blue mystic's and 1 Green house seeds Diamond girl (all ladies were germ'd from feminised seeds - no cuttings)

The problem i am having is with the Blue Mystic's both in the soil and also in the Wilma systems and also with the Diamon Girl in the Wilma. The leaves on the Blue Mystic's are a nice healthy deep green colour, but some of the leaves are drooping (although not massively) and all of the Blue Mystics have a strange non sharp but at the same time jagged appearance at the tips (its quite hard to explain so check the pics)

Soil - Mix of 75% Canna Professional and 25% Bat Mix
Added Clay pebbles for airation
Added Vermiculican
Watered roughly every 3 - 4 days with P.H Water of 6.1 and no Nutes

When i first transplanted from 3" Rockwool pots i noticed that they had what i thought was extreme sensitivity to the light so i moved the light further away and they responded very well, they have since been in veg for around 2 weeks and only now have started to develop this strange curling / jaggedness at the edge of the leaves. Some of them also have twisted leaves and curved leaves, basically they are not very uniformed. As the 1 wilma with all the cheeses is flourishing and its mainly the mystics (also the 1 Diamond girl in the soil is really good so i dont think its the mix) im struggling to think that its Nute or enviroment related. What is strange is that it seems to mainly only be the Blue Mystic's that are suffring with this problem, ive looked at a few other grows on here of them and they dont seem to have the same thing so im wondering if its not as i first thought a genetic problem. Is the Blue mystic a very light sensetive strain as its about the only thing i can put it down to ? The light is still fairly far away and the room temps are always really good as is the air quality so im stumped ???

Any help would be greatly appreciated... 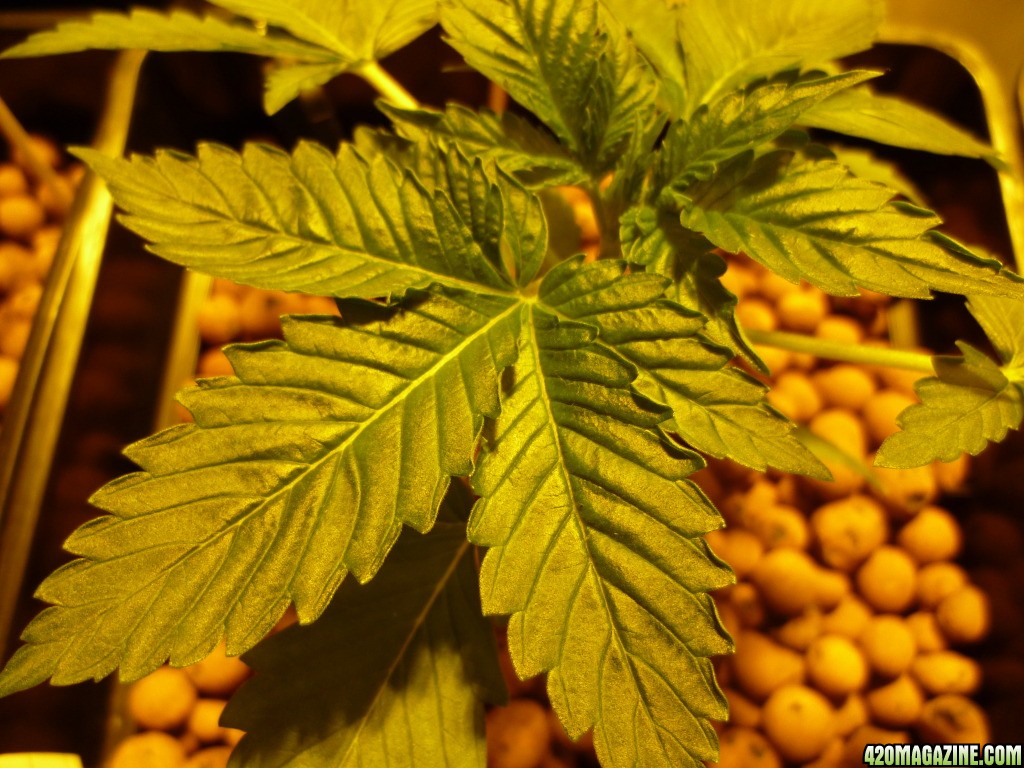 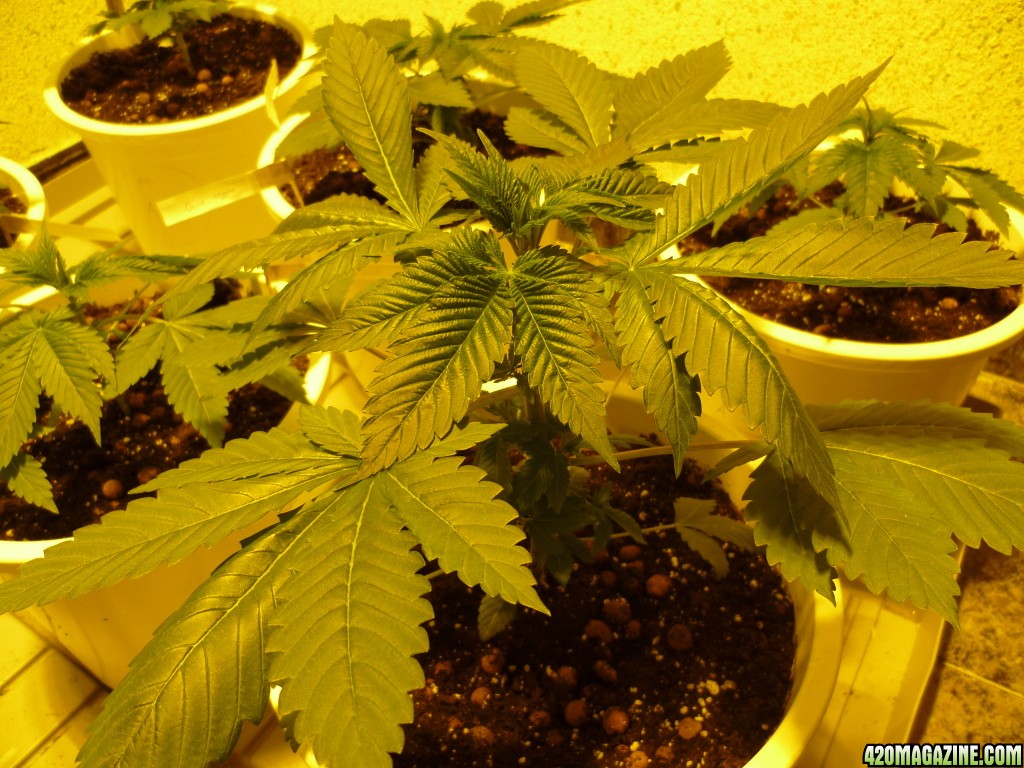 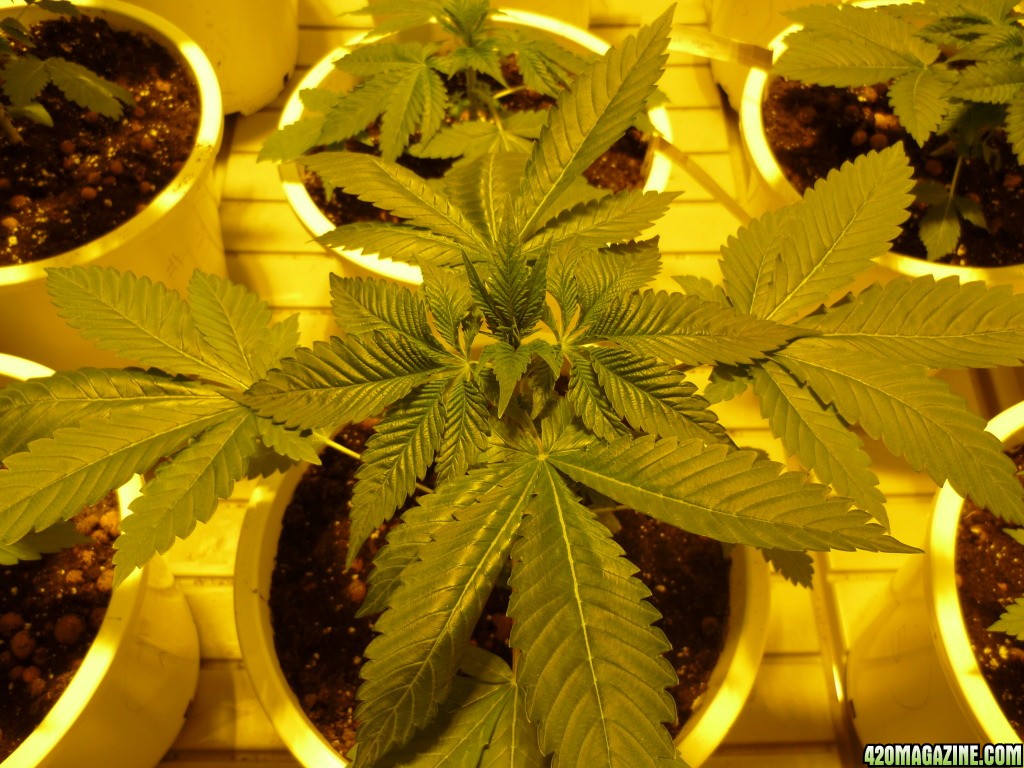 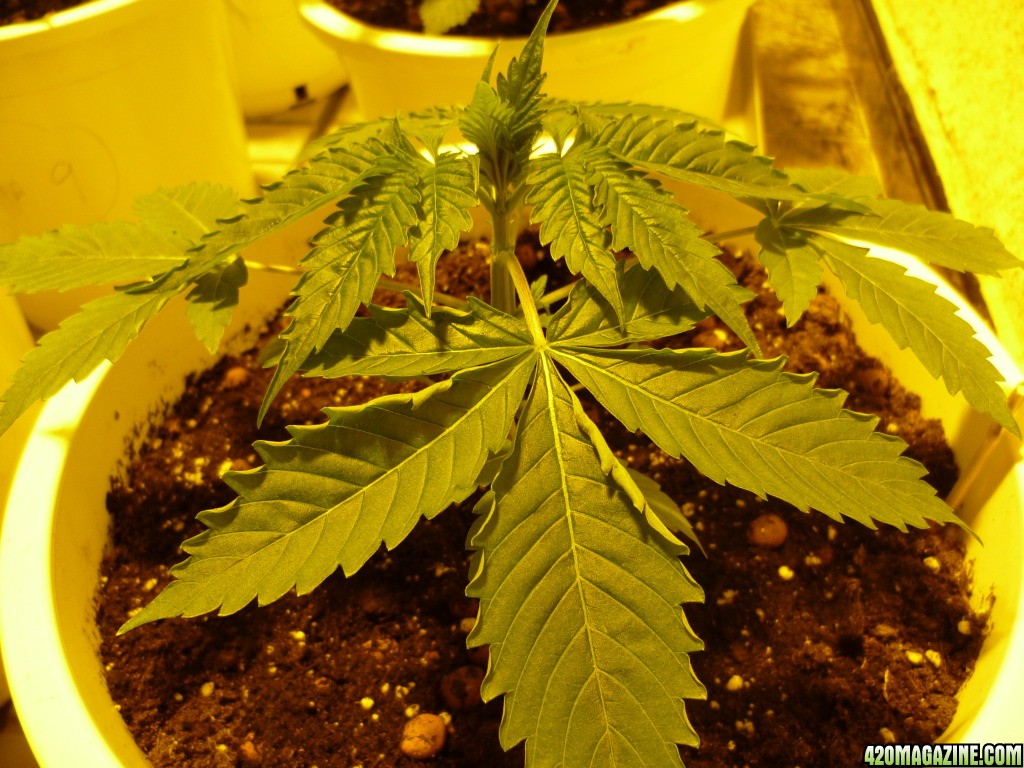 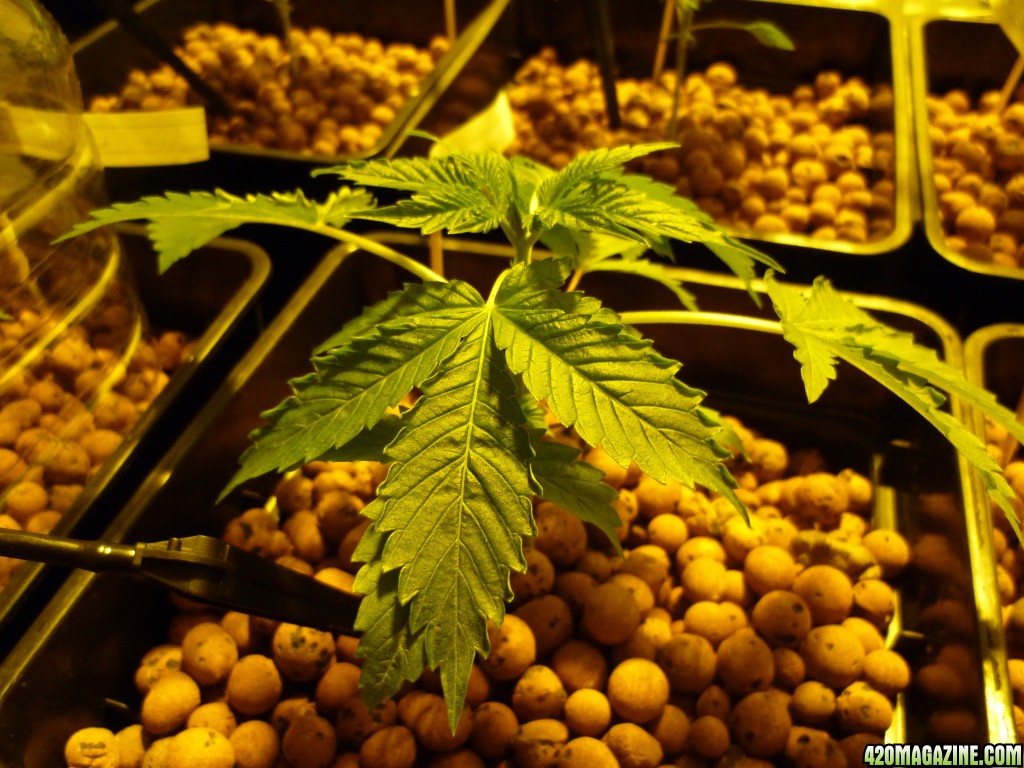 The first thought that I had when I saw the pic was they are being overwatered...
420 Magazine®
Creating Cannabis Awareness Since 1993

Cheers for the replies guys, I honestly dont think its overwatering related as (in the wilma's) i have cut the feed down from 15 minutes on 15 minutes off and they were fine on that schedule, to 15 minutes every hour... Im starting to think that it might be a phospherous / magnesium problem, also i want to add some liquid silicone into the feed for the wilma's as im unsure or the silicone content in the water where i am located...

As it stands currently, before i get down to my local shop ive cut the feed again down to 15 minutes every 2 hours just to be on the safe side, im also going to swing the PH from 6.2 up to around 6.5 max or so to allow absorbtion of magnesium...

Any thoughts are more than welcome

looks like high ph your plants only getting nitrogen if you weren't getting mag. your plant would start yellowing if they dont start looking better cut the nutes down the darker green leaves is an indication that you have high nitrogen. raise your ph and their going to burn. I think you have too many different strains in each of your set up just my opinion. Seem to me your doing some advanced growing a lot of work. Check youtube see if your seed companies posted anything I know that the Green House uses Ph levels in soil that some would consider for Hydro growing I try and stay 5.7 and 6.2 its all in the strain, I use coco and peat. When I use plan water I get leaves like that.
The more you grow the more you know and knowing is half the battle GO JOE'S!!

Cheers for the reply, i think i have figured out the problem, and your right in a sense, its due to a PH problem... I think the PH has been too low a couple of times (lower than the 5.8 at which mag is absorbed) and as such ive had a nute lockout, the Mag has been unable to get absorbed properly and has been shut out completely even when the PH has then been high enough to be absorbed... Ive given the tanks a flush now with PH'd water and no nutes and will be re-introducing the nutes tomorrow so ill let you know how they get on...

Seed starting for hydro? How?