Hemp A Huge Missed Opportunity For The U.S.

For more than five decades, industrial hemp has suffered mis-classification because of its resemblance to marijuana. Both are members of the cannabis family, but where hemp is grown for food and other everyday uses, marijuana gets users high. Marijuana remains banned under the federal Controlled Substances Act, which theoretically extends to industrial hemp, though it contains less than 0.3 percent THC (the psychoactive substance delta-9 tetrahydrocannabinol), while marijuana typically holds 5-25 percent THC.

A move has been under way to decriminalize both products. Seeing the handwriting on the wall, in August 2013, the U.S. Department of Justice issued mandatory guidelines to federal prosecutors nationwide to not sue or block state laws legalizing marijuana. By implication, the directive includes industrial hemp.

Previously, DOJ had decided to quit seeking federal mandatory minimum sentences for certain low-level nonviolent drug offenders. The federal government now leaves it to the states to enact regulations that will prevent marijuana sales to minors. You'd think the same would apply to the growing of industrial hemp, particularly since section 7606 of this year's Agricultural Act authorizes hemp research and development in states that have legalized hemp cultivation. It seems, however, the Drug Enforcement Administration begged to differ, whereupon Kentucky rendered DEA interference its cause cÃ©lÃ¨bre.

"Researchers and farmers are producing the first legal hemp crop in generations in Kentucky," wrote Bruce Schreiner of the Associated Press on Aug. 17. Sadly, and no thanks to federal bumbling, this year's crop consists of a mere 15 acres, from plots that "resemble the size of large family gardens."

Kentucky's farmers have been eager for a viable alternative to tobacco production, which has fallen on hard times, but hemp's reintroduction hit a snag when federal agents confiscated the seed the state's Department of Agriculture was importing. Aggrieved, Kentucky sued the federal government. On Aug. 15, too late for this year's seeding, the case was settled through an agreement whereby the DEA issued a permit to Kentucky's agriculture department for the importation of hemp seed.

Kentucky once was the nation's top hemp-producing state; in 1838, rope and bagging factories in Lexington alone employed 1,000 workers. George Washington grew hemp as his primary crop at Mount Vernon. Thomas Jefferson grew the plant as a secondary crop at Monticello, and he urged farmers to grow hemp in lieu of tobacco. Benjamin Franklin used it as the raw material to start one of America's pioneering paper mills.

Hemp is a fast-growing crop that requires no irrigation and no fertilizer. One acre of hemp can produce 3-10 tons of biomass every four months of growing season. Hemp is cheap to tend, doesn't need pesticides, and is actually good for the soil in that it fixes nitrogen. Hemp is heartier than most similar plants, and it's the strongest natural fiber in the world.

In Colorado, industrial-hemp production has been under way since 2012. When Colorado realized the implications of the Kentucky settlement, its agriculture department applied for–and obtained–a permit like Kentucky's, whereupon Colorado's universities obtained DEA permits allowing the acquisition of seed from their state's agriculture department. The maneuver enables Colorado's purchasing of hemp seed without having to worry about DEA interference, and it also ensures that hemp research won't endanger its universities' federal grant funding.

The uses of hemp are wonderfully diverse. They are "food, feed, fiber, fuel, shelter, and . . . filter for air, water, and soil," states HempCleans.com, adding that hemp oil is highly nutritious. Its "near-perfect balance of Omega 3, 6 and 9" is added to health foods, from hemp milk to snack bars.

Hemp fiber's strength is attested by automobile parts manufactured from bio-composites that mimic fiberglass and plastics: German auto makers regularly use this bio-mass. Further, companies such as Calvin Klein and Adidas have incorporated hemp into their product lines. Animal feed and bedding comprise other uses. Then there's hempcrete, a building product "stronger and lighter than concrete" and "naturally antimicrobial and insulative." Finally, both the seed oil and the stalks can be used for transportation fuels.

The potential medicinal market "exceeds the current technical one by greater than a factor of 10," writes another industry hopeful, noting that THC concerns and "legalization industry missteps" yet hamper the product's full development. The U.S. is the only industrialized country that banned hemp while consuming the world's largest volume of hemp products: Total sales of products to the U.S. containing hemp are estimated around $450 million. Australians and Canadians use hemp domestically and export it as food, animal feed, and biofuel. So do the Chinese, who have cornered the market on the uses of hemp fiber. To its financial detriment, the U.S. lags behind in a lucrative agricultural market. 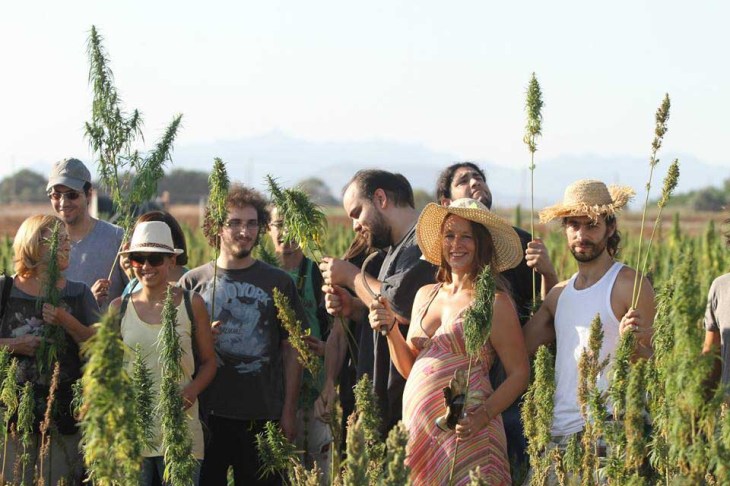