The U.S. House will vote on two amendments Thursday that would prohibit the Drug Enforcement Administration from interfering with industrial hemp programs and cultivation that have been legalized by states. One hemp-related amendment would prohibit the Department of Justice, including the DEA, from blocking states from importing hemp seeds to grow for state industrial hemp research programs made legal by the recent passage of the federal farm bill. The amendment to the Commerce, Justice, Science and Related Agencies Appropriations Act, which controls the DEA's budget, was offered by Rep. Thomas Massie (R-Ky.).

The other hemp amendment, offered by Rep. Suzanne Bonamici (D-Ore.), would prohibit the DOJ from spending funds to prevent a state from implementing its own laws that authorize the use, distribution, possession or cultivation of industrial hemp. The hemp amendments come in the wake of a high-profile DEA seizure earlier this month of a 250-pound shipment of industrial hemp seeds intended for use in Kentucky's hemp-growing pilot program. Kentucky sued the DEA for release of the seeds. They were released a little more than a week later, after the state's agricultural department obtained a special permit.

The DEA action incensed Democratic and Republican lawmakers involved in the new industrial hemp laws, drawing condemnation from Kentucky Agriculture Commissioner James Comer (R), Sen. Mitch McConnell (R-Ky.), his Democratic challenger and Kentucky Secretary of State Alison Lundergan Grimes, Rep. Earl Blumenauer (D-Ore.) and Sen. Rand Paul (R-Ky.). DEA chief Michele Leonhart is known to be a foe of hemp. She previously told a group of sheriffs she was upset by a flag made of industrial hemp that flew over the U.S. Capitol on July 4, 2013, at the behest of Rep. Jared Polis (D-Colo.).

Currently, 15 states have legalized industrial hemp production, and about two dozen others have introduced legislation that, if passed, would authorize research, set up a regulatory framework or legalize the growing of industrial hemp. Hemp is the same species as marijuana -- Cannabis sativa -- but it contains little to no THC, the psychoactive ingredient in marijuana associated with the "high" sensation. Hemp, sometimes called marijuana's "sober cousin," has a long history in America and has been used in a wide range of household products, including paper, cosmetics and textiles. In the 1700s, American colonial farmers were required by law to grow the plant, and it was used for hundreds of years in the U.S. to make rope, lamp oil and much more. American industrial hemp production peaked in 1943, with more than 150 million pounds from 146,200 harvested acres. Production dropped to zero in the late 1950s as a result of "anti-drug sentiment and competition from synthetic fibers," according to The Associated Press. 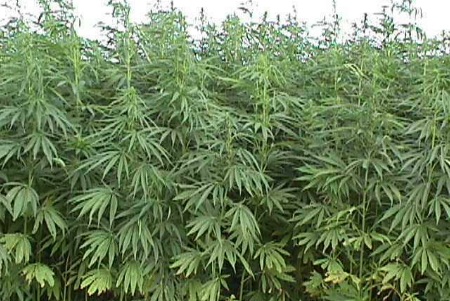